Our New Hampshire visit was a much different experience than Newport, mainly due to BUGS! There were virtually no bugs in the Newport campground so we could spend unlimited time outside unmolested. Not so in the woods of NH. Also, our campground there was about a 35 minute drive from Jeff’s parents’ place, so the running back and forth in our truck got old after a while.

Despite that we still had a great time enjoying Wolfeboro, Lake Winnepesaukee and family. The first weekend we were here Vicky came up for a couple of days. We took the boat up to 19 mile bay for ice cream and she sampled our pullout couch in the RV. We ran right out and bought some firewood and were planning to have a roaring fire at our new campsite.  But before we could get it started we were swarmed by mosquitos, so we ran inside and turned on the fireplace instead.

Jeff and I went on a few mountain bike rides along shaded back roads and even over a covered bridge nearby. These rides were fine as long as you kept moving. Stopping for any reason involved an immediate attack by deer flies, mosquitos and gnats. The gnats didn’t bite but had a strange desire to fly into every opening on your head (ears, eyes, nose, mouth) yuck! 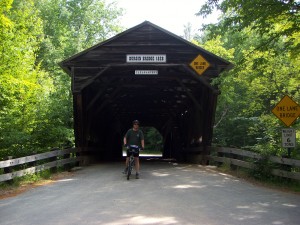 Even our screen house didn’t completely solve the problem. We set it up on the grass and arranged our anti-gravity chairs and cocktails, only to find that all the little gnats which had apparently been in the grass were now on the ceiling desperately trying to fly to the light. They didn’t really come near us, but it was alarming. We opened the screens to try to free the gnats, and 2 bees and a huge moth came in. We went inside. 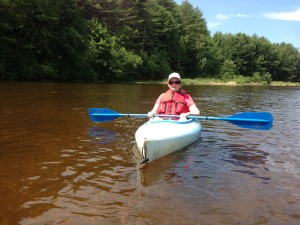 On the weekend, we did a gorgeous 10 mile kayak with Jeff’s sister, Nancy, down the Saco River in Maine. The current was perfect given some recent rains and there were lots of people out enjoying the sandy-bottomed river. Sunburned, drunken campers provided entertainment (only one got us with a water canon).

We had some nice family time with Jeff’s parents, sister Nancy, brother Peter and his wife Irene.  We went to the 4th of July Parade and drove the motorboat to Wolfeboro Bay for the 4th of July fireworks. It was a really nice evening and the fireworks were fun, but there was some adventure afterward. As everyone was leaving the bay, the boat would not go into gear. Fortunately we were able to hail another boat and they graciously towed us to a marina not far away. Then we had to wake up Jeff’s parents to come pick us up – parenthood never ends!

It was great to see Jeff’s parents, Jim and Aline. They were wonderful hosts and we had many fun visits at their condo playing games, hitting golf balls and eating yummy dinners. Aline even made us her some of her famous goodies such as breakfast crepes, spice cake and lemon cake.

On our last full day in NH I kayaked on the Beech River to Ossipee Lake. It was a gorgeous day.   I saw some impressive turtles (dinner plate size) and a pair of Pileated Woodpeckers. They flew away too quickly for me to snap a picture, but they’re about crow-sized, very colorful, and they mate for life.

There were quite a few rain showers and thunderstorms while we were in New Hampshire too. That, in addition to the bugs, prevented us from using that nice stack of firewood we bought the first night of our stay. As our time in NH neared its end, I set up the screen tent next to the fire pit hoping for an unmolested campfire, and things were looking good (gnats and bees apparently asleep). The firestarter was ripping through the nice, dry kindling; I was settled in my comfy chair;  and then I saw lightening. I SWEAR I did not see a thing on the weather radar map that I had checked just before starting the fire, but there it was.  A huge storm came through, so I had to watch the fire (which survived!) from the window of the camper and then run out in the rain to put it out before bed!

Jeff’s brother Peter showed us an awesome option for battling the bugs aptly named    “The Executioner”.  You know how when you go outside there’s always that one deer fly that just persecutes you the entire time? Well, this puppy is the answer. One swat and “POW!” — it’s gone.
So far our trip has been better than expected. Admittedly, the campgrounds we’ve been in are not the typical packed-in resort  style we’re likely to be experiencing next. Having so much nice, relaxing time with family has been awesome. Now, we’re off to Bar Harbor!
Hope you’re all enjoying your summer – we miss you New Jerseyites….