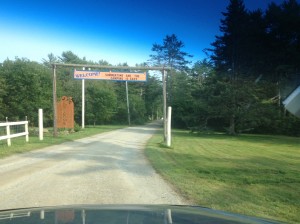 I spent a week by myself in Searsport, Maine while Jeff made a trip to his home office in Columbus, Ohio. We set up camp on Saturday night at Seaport Shores Oceanside Campground, a beautiful place right on Penobscot Bay. 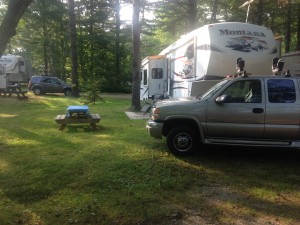 The camp spaces were large, grassy and nicely shaded. Some were even right on the shoreline. A lot of people came for only a few days and it was a nice, quiet place.   The campground was unique in that it had a very artsy feel.  There was a house on the grounds where an “artist-in-residence” was working, and they had art classes for kids. There was also a gorgeous flower/ vegetable garden and a goat pen! 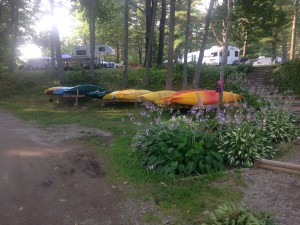 The best feature was that I was able to leave my kayak in the racks right at the shore so when the weather allowed I could kayak easily.   They also had a nice game room with a book and video “swap/borrow” area.

On the way to the Portland airport,  the highway crossed several rivers. One was called – I kid you not – The Passagassawakeag.  All we could figure was that the white man introduced cheese into the diet of the local Indians, and from then on they were known as the Passagassa Indians…

And then there was this guy…who just sums up the personality of the Mainer in my mind. He was quite elderly, and was riding his bike downtown. Wherever we went in Maine, people of all ages were just outside doing something. Exercising, sitting, going somewhere without a car – they were not to be stopped. I liked them.

Saturday we head toward PEI and will have our first experience “Boondocking” in a truck stop or Wal-Mart parking lot for a night!

One thought on “Searsport, Maine”