Sue had another long term work assignment in an area where we could park and stay, reducing the amount of flying she had to do. The office is in downtown Fort Worth, but we stayed about 1/2 hour away in Arlington, which is a major bedroom community for the Dallas/Fort Worth area.  It’s also where Six Flags Over Texas is, and it was strange for Sue to remember that she had been there with her family when she was about 5 years old.

We found a nice, quiet park called Treetops and got a spacious spot for a month with trees all around. The weather was alternately wintery (no snow but freezing at night) and summery (80s). It was a gorgeous night for the Superbowl!

We found some fun bike paths and a local tennis center where you could rent a court for a very reasonable fee.   With lights, we were able to play an evening or two after work and we managed to regain some of our long lost tennis skills.   We had tried to play at one of the free park courts but it was full.  The one time we did get a court we had the unpleasant experience of an overbearing father yelling constantly at his 10 year old to play better.  It was so bad that we left, but before we did Jeff asked how much longer the yelling would go on.  He made it clear that he didn’t care how obnoxious he was.

Fort Worth, also called “Cowtown” is a fun and growing city.  The Trinity River winds through the city and there’s a nice, paved recreation trail that follows it for 17 miles. The city has a very walkable downtown area with shops and restaurants and ‘Sundance Square’, which attracts residents and tourists alike. There are fountains there where kids are encouraged to run through the water as it shoots to various heights: great fun to watch on a sunny, warm day.

We had lunch at the edge of the square and watched a very organized, peaceful demonstration (for black lives matter) go through the town center. I was told by someone who lives there that downtown used to be quite a bad area, but that the addition of lots of bicycle police and renovations changed all that. There are eight college campuses in the city and, along with Austin and Houston, it’s one of the fastest growing cities in the country.

One of the touristy but fun areas is called the Stockyards. Apparently, back in the late 1800s, thousands of cattle were driven along the Chisholm Trail to Forth Worth where they were put on trains to slaughter destinations. Some investors decided to buy the stockyards and make Forth Worth the destination instead, and it became known as “Cowtown”.  It became a center for cattle buying/selling and rodeos. There was a rodeo going on in the “Cowtown Coliseum” while we were visiting.

Today, you can see some of the cattle in the yards and watch a re-enactment of the cattle drive with “real cowboys”. There are lots of touristy shops where you can buy all manner of cowboy/cowgirl clothing, boots and hats. You can also get steer horns, and Sue very much wanted a set for the front of the truck but Jeff declined 🙂 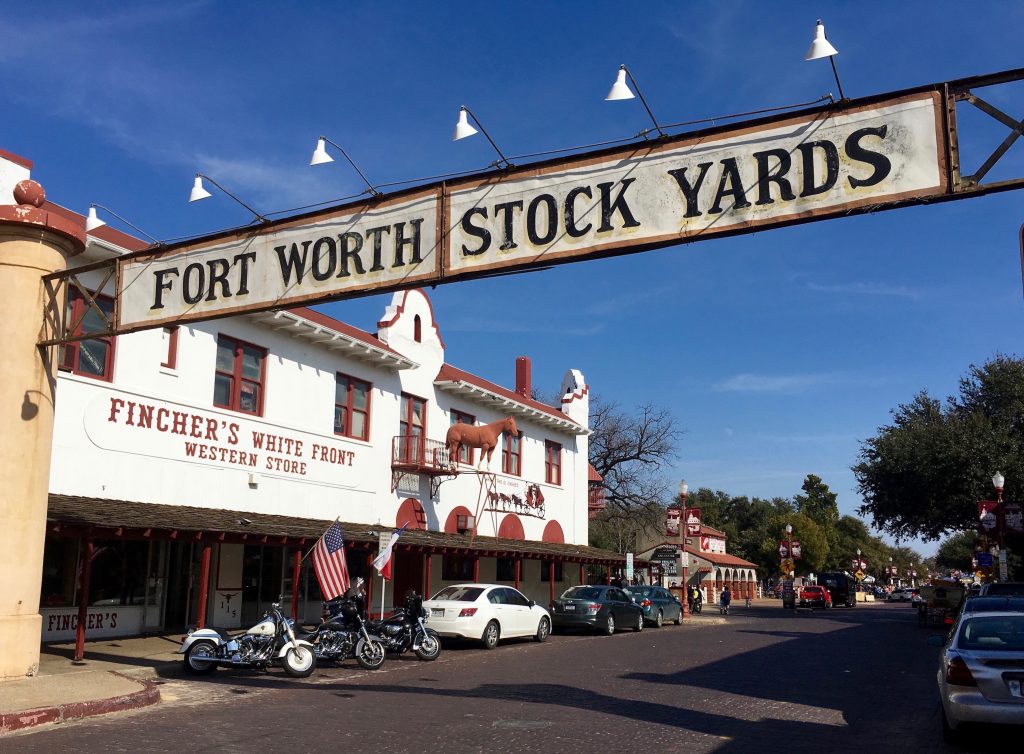 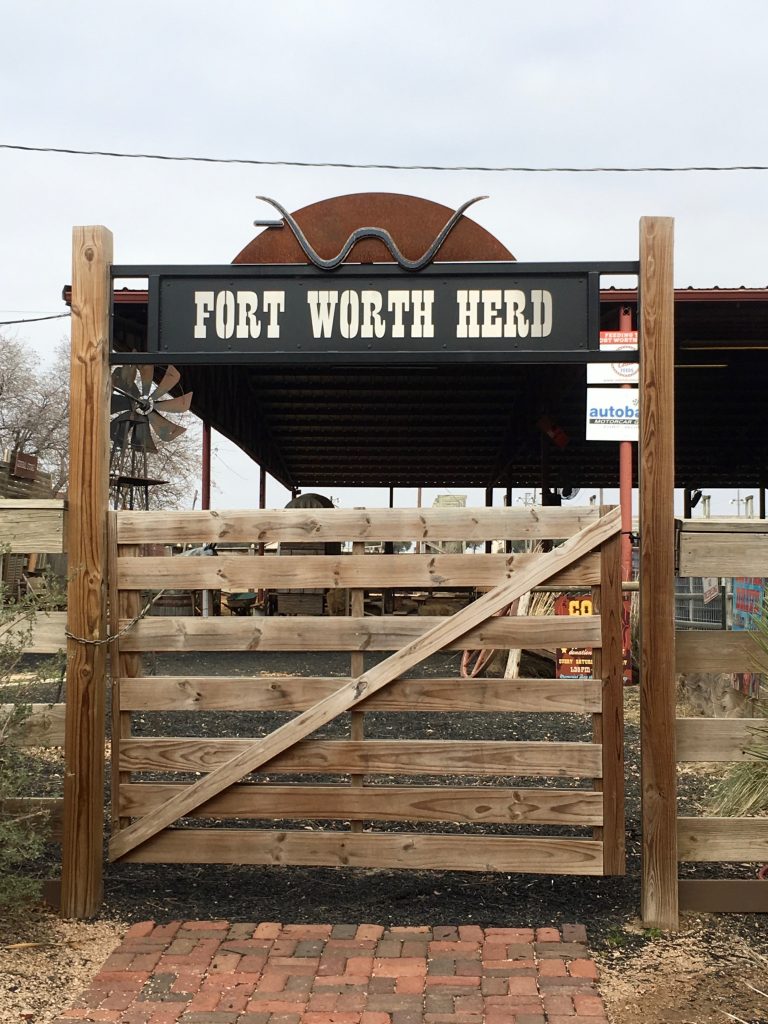 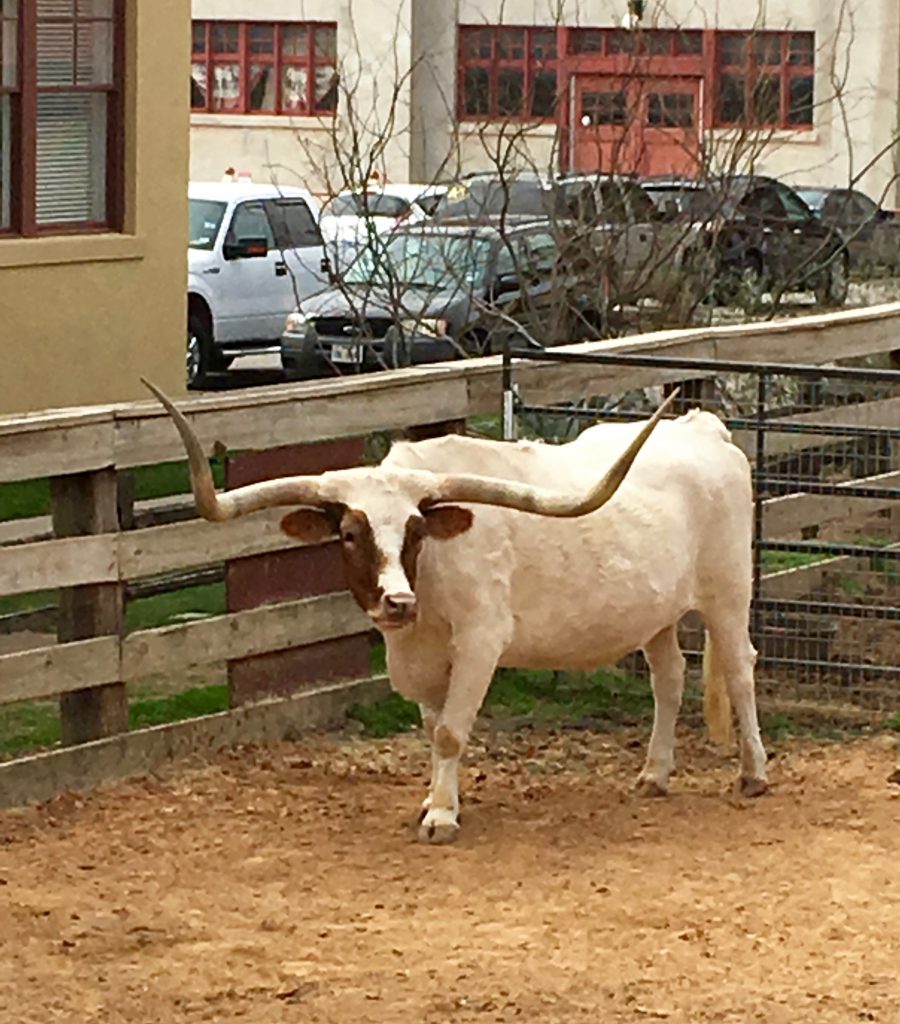 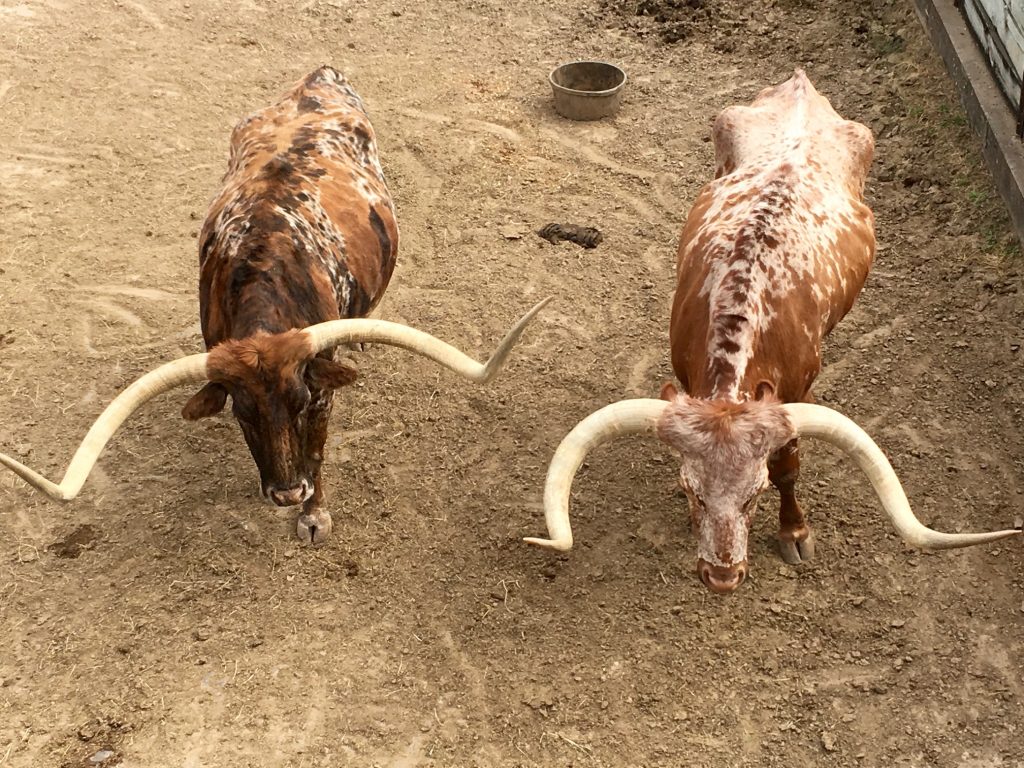 We had lunch at a fun little place called the Love Shack. They had live music and outdoor seating. 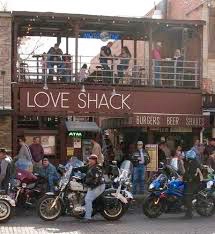 And then there was this…

There is still a huge rail yard in the city, right behind my favorite hotel, causing me to give Fort Worth the motto, “Trains gotta honk”.

We walked into the club and there was one couple other than the bartender..  Hmm, not good.  Sue asked where the open mike night was and there was a hallway to the theater area.   We walked in and there were only about 25 people in there.  We managed to stay about 20 minutes, through a variety of very not-funny people ranting about life, love, and politics.

On a much more positive note, since we were in town for a number of weeks, we checked out the Westside Unitarian Church in Fort Worth.  It was a vibrant congregation.   The sermon on our first visit was about welcoming new people.  Needless to say, we were busy talking in the social hour after the service as all the others put the sermon to use welcoming us.  Jeff found a fellow that is a pilot and mechanic at the local airport, so they had long conversations about flying.   It was good to see that even in the red state of Texas that there are at least a few pockets of more progressive people.

One weekend we went over to check out Austin. We had been there briefly a few years ago but didn’t get to spend a lot of time. It was a blast! We dubbed it New Orleans- West, complete with ridiculous party streets full of drunken revelers (6th Street). There was one place called “Ester’s Follies” which was a Vaudeville bar.   They had windows so you could watch the show from the street – and watch the tourists watching the show.  Very funny as a group of four 60+ year old women came on stage in trenchcoats.  As they took them of, they exposed that they were wearing those long t-shirts with pictures of bikinis, and the crowd went wild!

We had dinner and drinks on Rainey Street. It was a gorgeous night to sit outside, listen to all the live music and people-watch.   We had been here 4 years ago and it was just as lively. 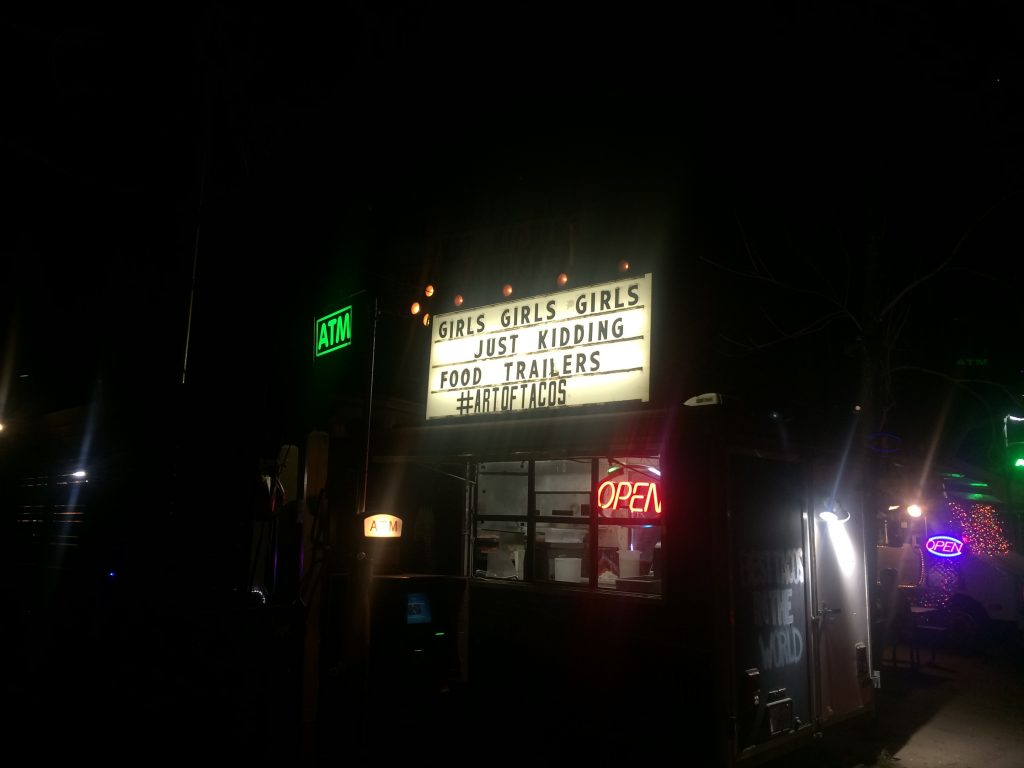 Saturday, we took a Segway tour of the city – a geeky but excellent way to get around. Ours was focused on “Street Art”. Our cheerful and competent guide led us around for 2 hours explaining the many areas of graffiti, statues and artwork.

We went through downtown districts where people were outside sitting at tables and we got plenty of amazed and amused looks. We were a group of about 10, and an oriental tourist actually took pictures of us!

We stopped for quite a while at a cool graffiti park.   Condos were being built but after the foundations were poured, they found that they weren’t going to hold properly so the builder gave up.  Apparently after trying to stop the graffiti for some time, the city gave up and embraced it.   The foundation walls have layers and layers of graffiti and the smell of fresh paint is in the air as artists young and old ply their trade. 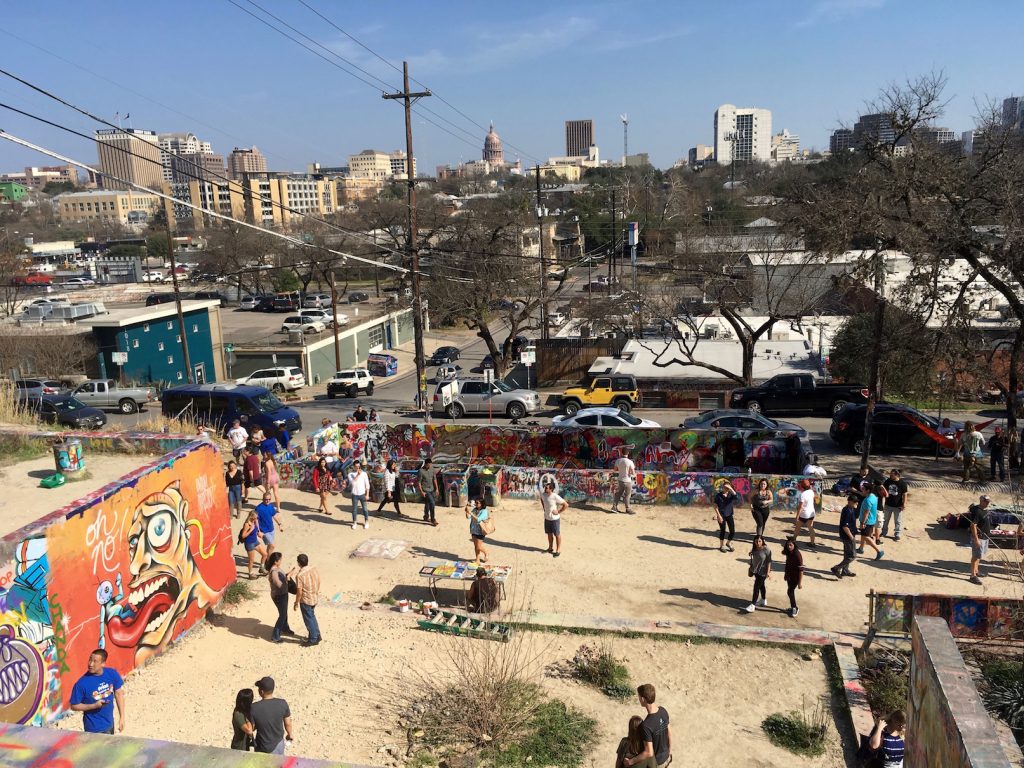 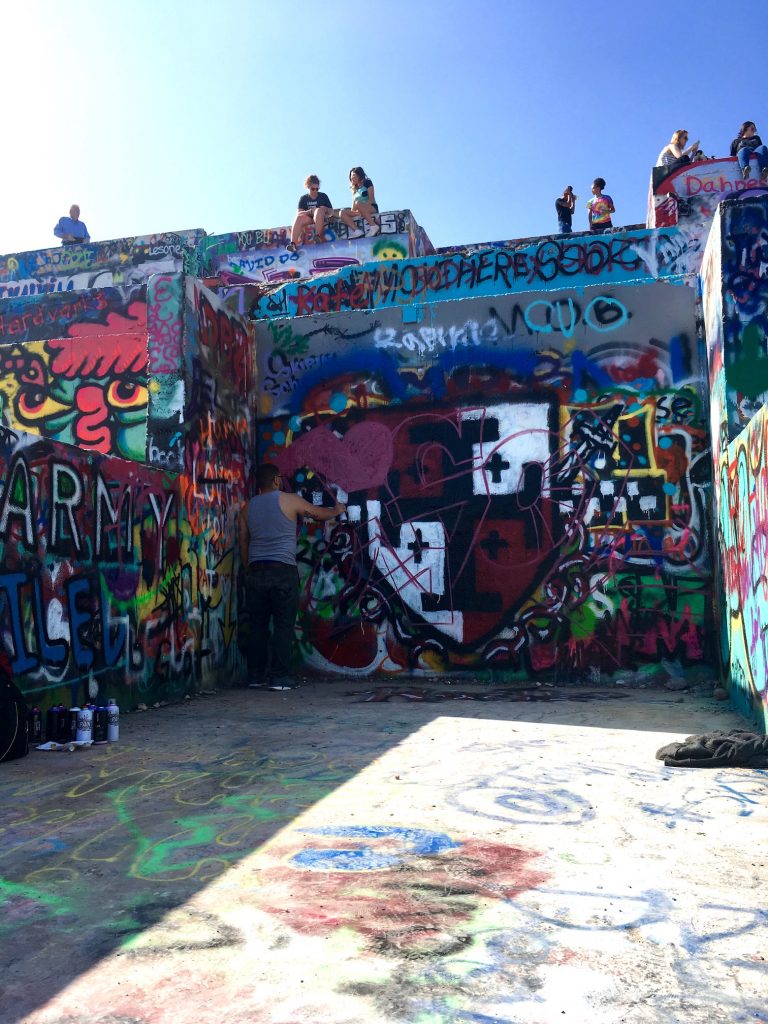 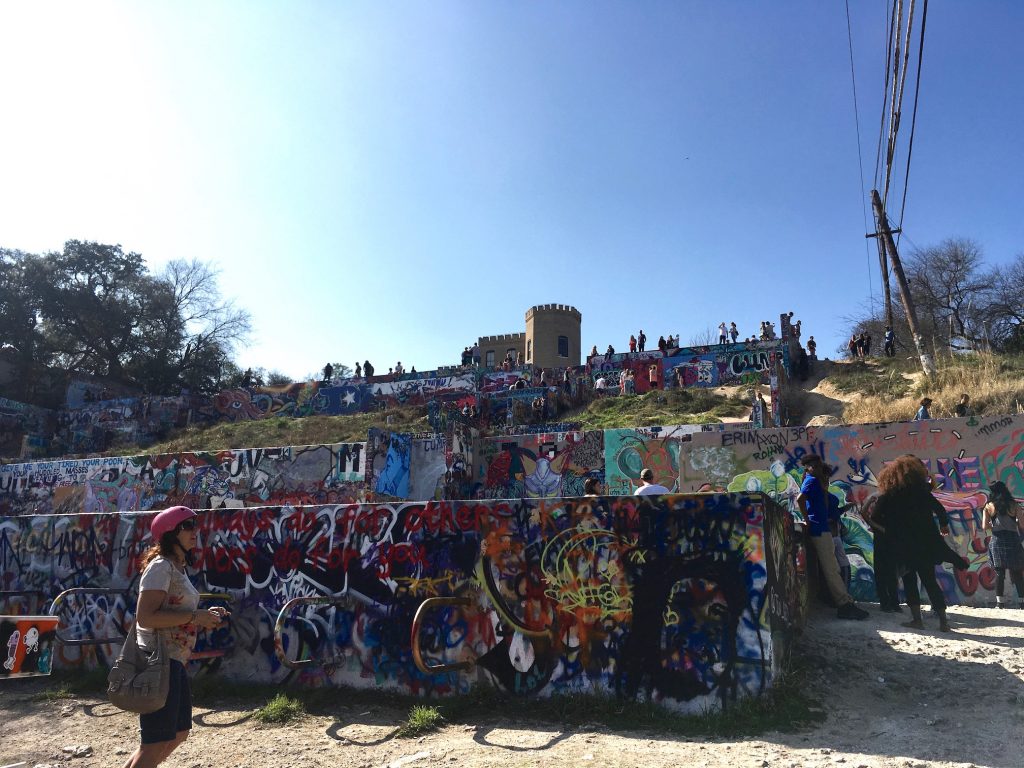 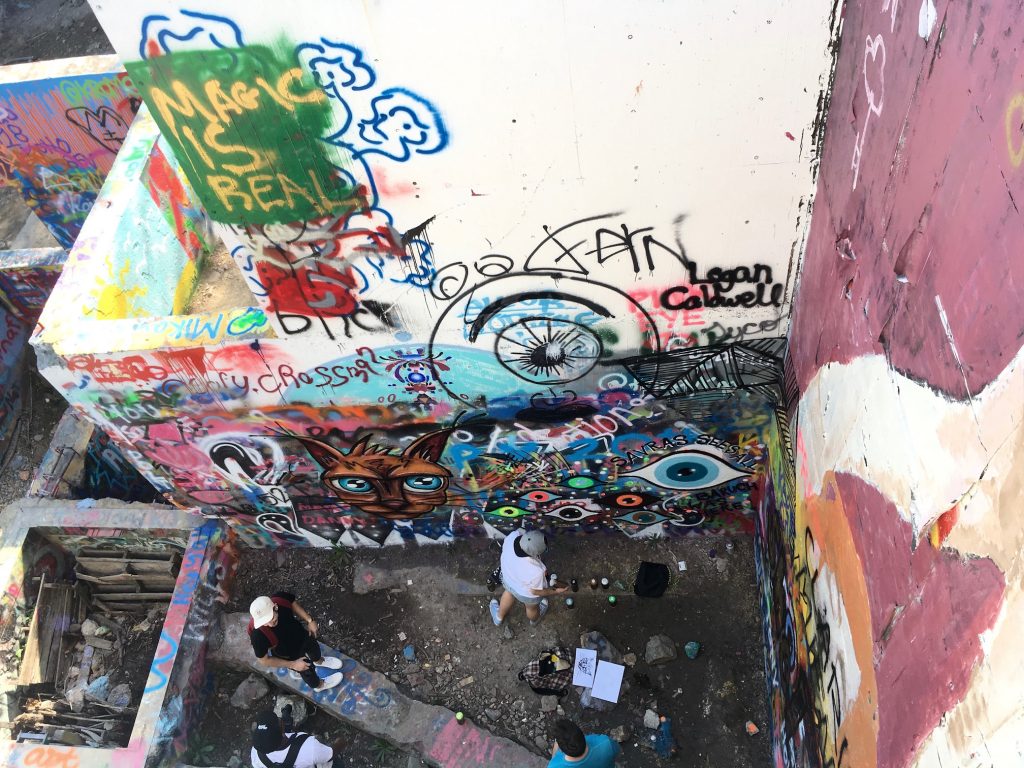 Saturday night we got a dog fix!  We met up with Mike and Kathie – whom we first met almost 2 years ago at Glacier.   They were camping just outside of Austin.   We had dinner at an Asian restaurant called “888”.  The food was good but the service was very weird – including only giving chopsticks to Kathie (who is of Asian descent) and then didn’t bother to ask if we wanted dessert..  Afterwards, we got to go back to their rig and see Opie, their lab/great dane mix.  100lbs of love!

Sunday, we rented those awful city bikes and had a fun time riding around. We met this man, Joe, under an overpass along the river and stopped to talk with him for about 20 minutes. He is a retired teacher who is teaching himself the saxophone and loves to meet new people. He talked about himself, politics, Austin, other areas he’s lived and listened to our whole story. He was cool. 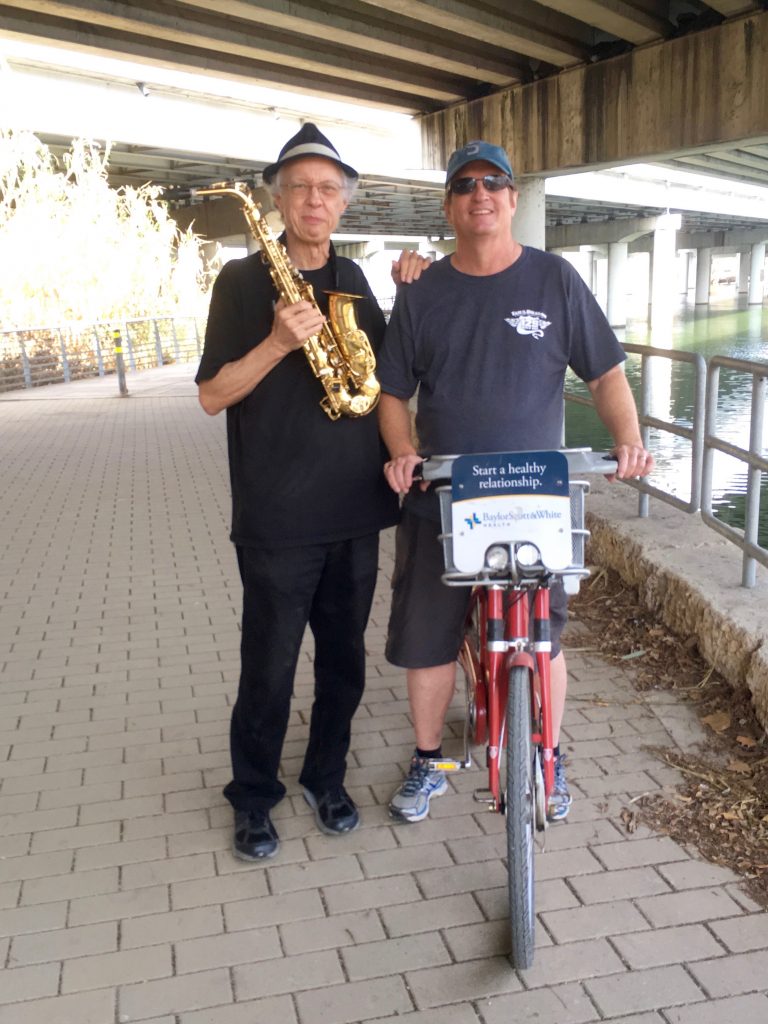 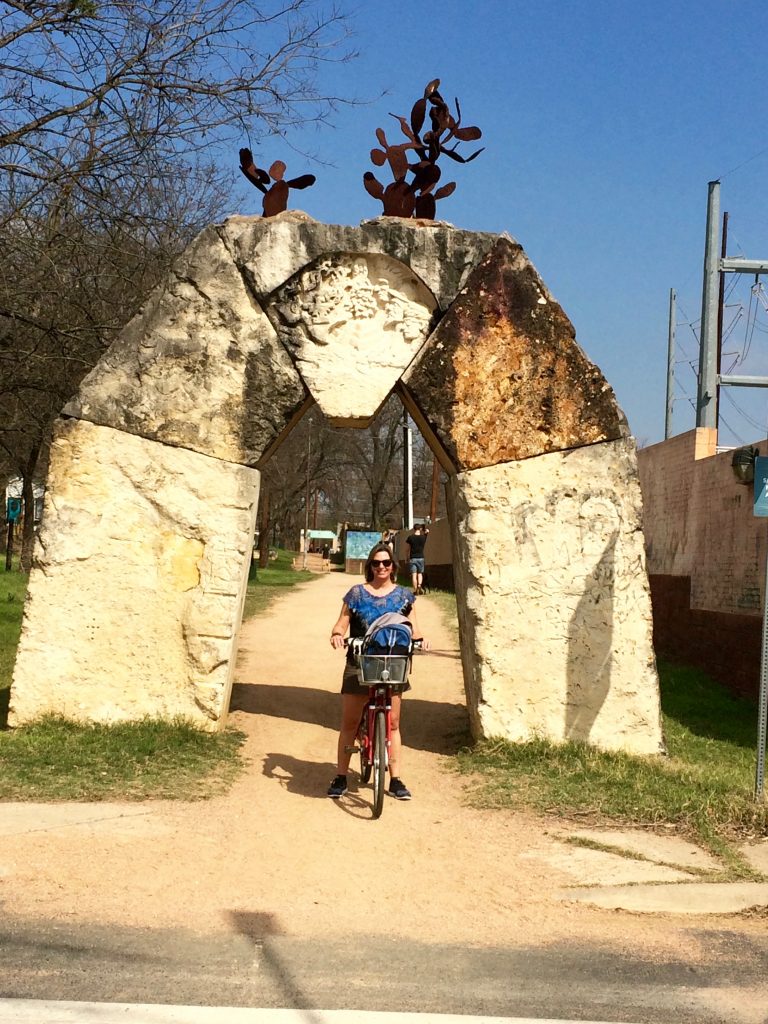 We had lunch at a cool little place we found accidentally: Arturo’s Underground Cafe. It was literally in a basement and was artfully decorated. The food was delicious! 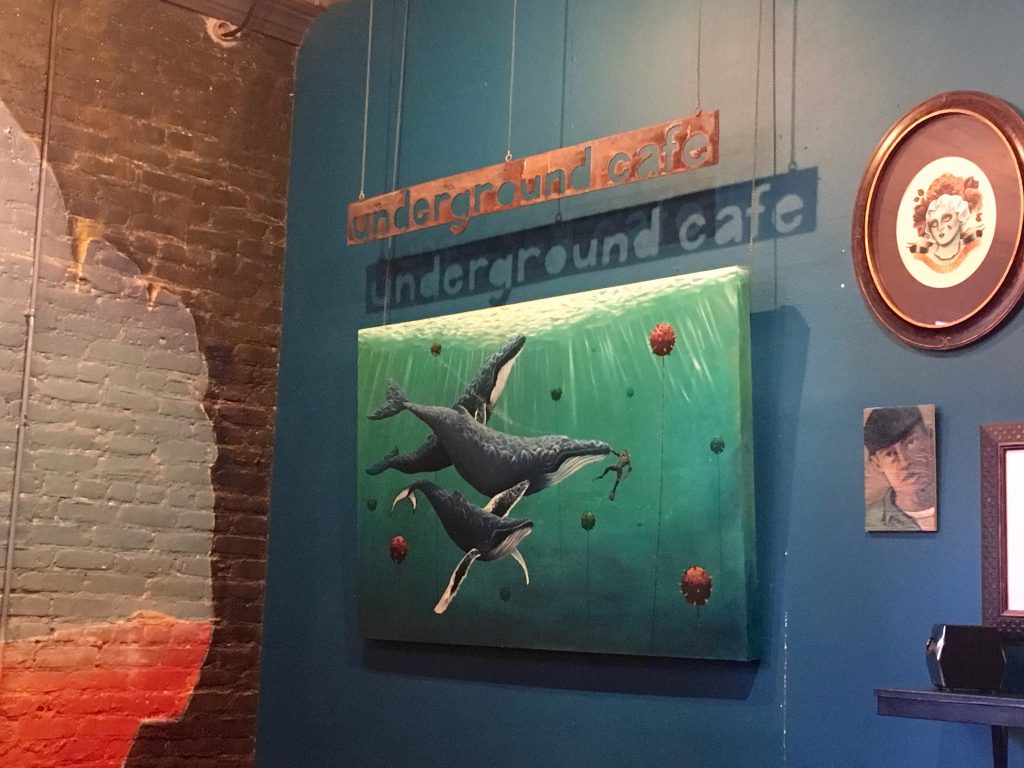 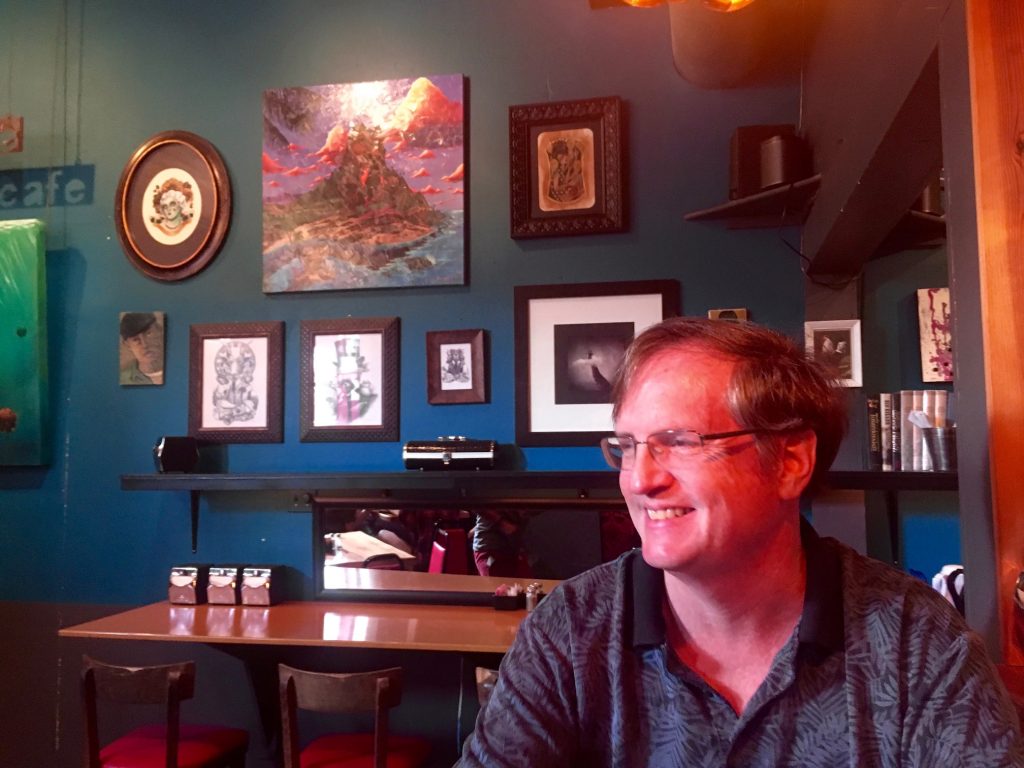 We’ve seen Voodoo Doughnuts in several hipster cities we’ve visited but never wanted to wait in the line. We hit this one right and it was an interesting experience….blasting rock music and yummy sweets… 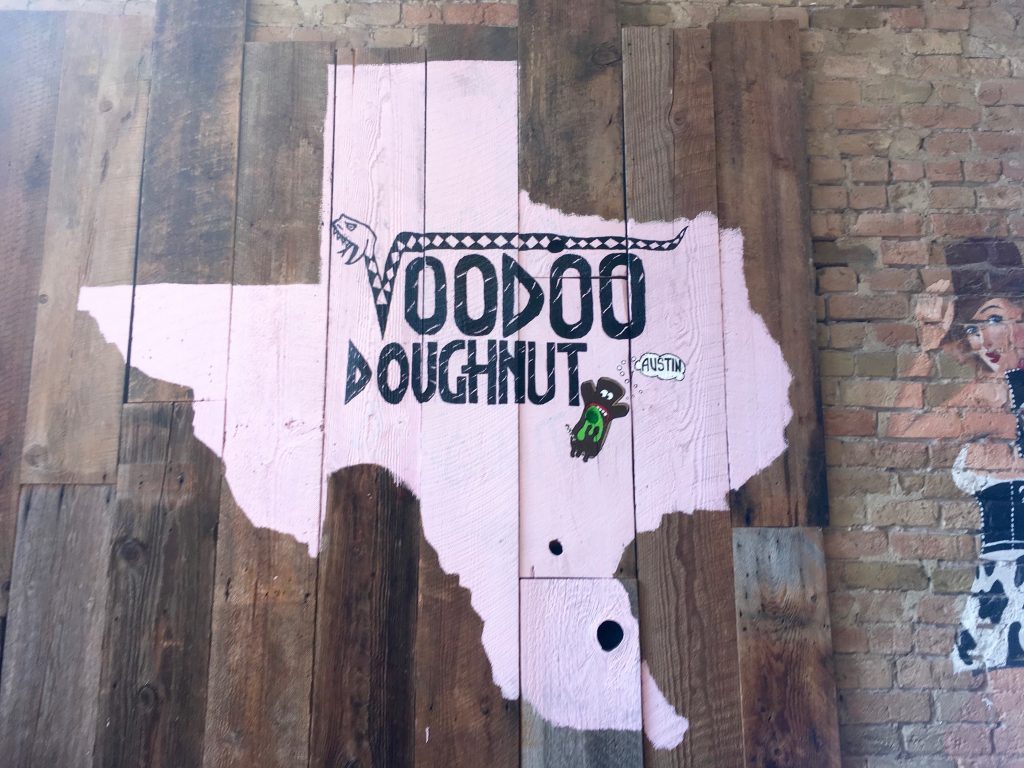 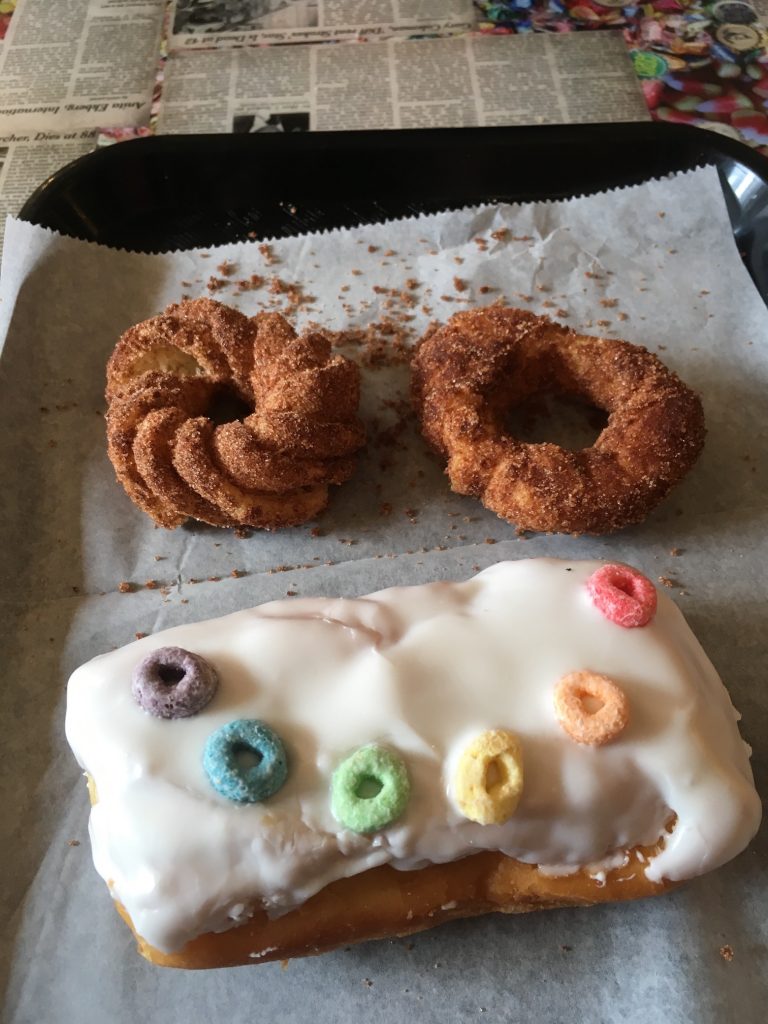 We toured the state capital – it’s a pretty amazing building: taller than the country’s capital (it IS Texas) and it extends 5 floors below ground. 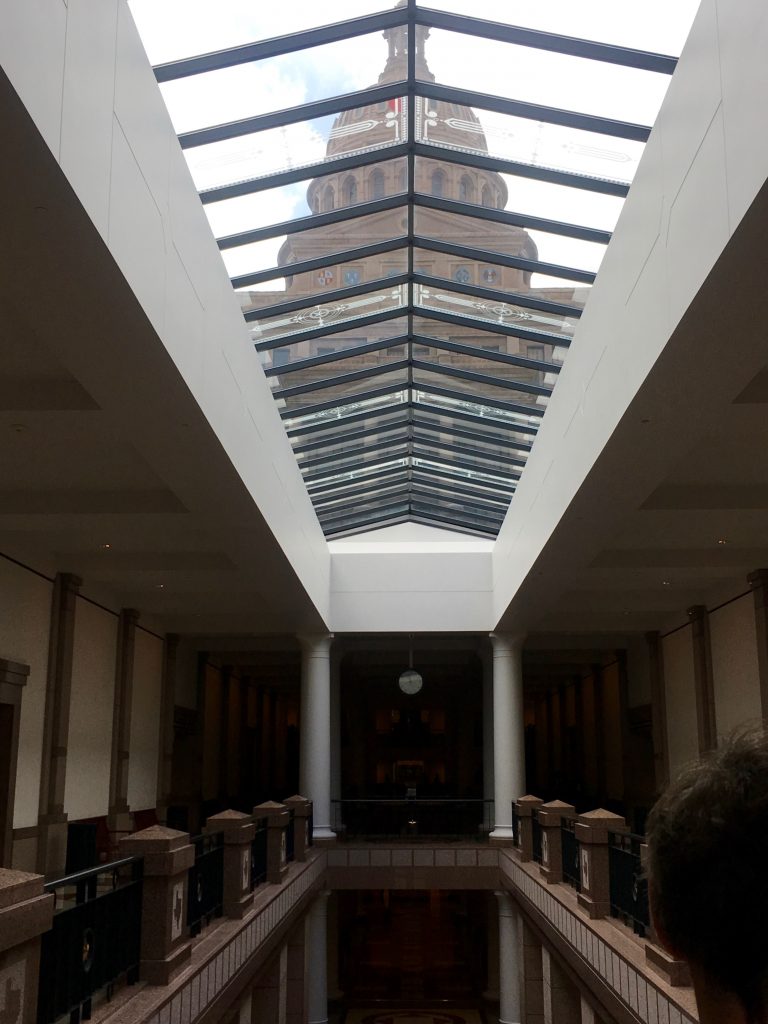 The only negative thing we experienced in Austin (since we didn’t have to deal with what we’ve heard is horrible traffic during the week) were the amount of homeless people aggressively panhandling. As we’ve mentioned previously, the pervasiveness of homeless people in every city we’ve been to has been quite upsetting to see. Also, having experienced and seen a variety of scammers in action makes it very difficult to know what to do. There is a large shelter in downtown Austin and I think they may kick the folks out during the daytime. So, they stream through the city preying on tourists. How many dollars can you give out? How do you know if it will be used for good or ill, or if it’s even safe to stop and get your wallet out? Difficult.

Sue ended up spending almost 3 months working in the Fort Worth office. It’s hard to leave the team after that amount of time. They are a sweet and dedicated bunch and will be missed.

It takes 3 solid days of driving to get from Naples to Fort Worth.  After the first day, you are still in Florida!  We stayed at a nice little campground just a mile off the highway.  We were treated to a pretty sunset over a horse pasture as we took a walk to get the kinks out. 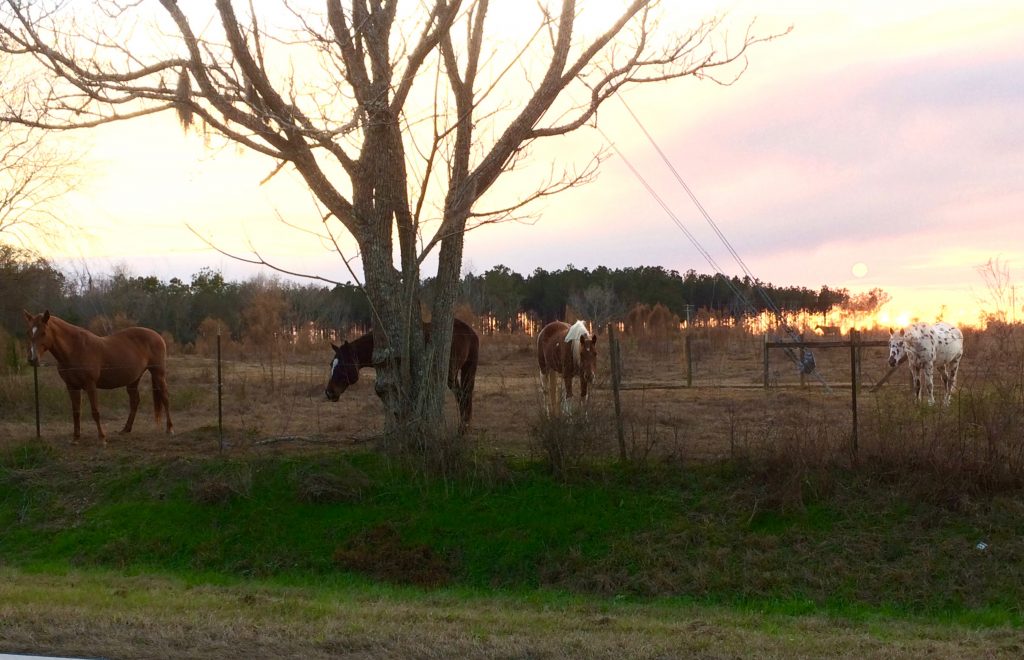 The 2nd day was a rugged ride diagonally across Alabama and MS.  The roads were in terrible shape and most of the cabinets were re-arranged.  That night found us in Vicksburg, Mississippi, on the banks of the mighty Mississippi.  Luckily the campground had a nice field so we could play some frisbee to get some fresh air.   We had a great dinner at a rooftop restaurant overlooking the river.  After dinner we read about a tornado in the 1930’s that severely damaged the city and checked out the mural art on a flood control wall.  Sue let Jeff check out a riverboat casino that was across the street.

The 3rd day across Louisiana and Texas.  Another rough ride, but got better in Texas.  Amazingly, we avoided a ton of nasty weather.  The night before we got to TX they had severe thunderstorms and tornadoes.  The day after we were in MS *they* had tornadoes.  We had a couple of showers but thankfully nothing that lasted more than 10-15 minutes.

They say that everything is bigger in Texas – well the highway interchanges sure are!  We had first taken the highest fly-over in this interchange of I-35W and I-20 in Fort Worth 2 years ago, in the dark…   We took many branches of it during our time here this time too.