Salmon – its all about the Salmon…   And the Halibut..  And the tourists!   But mostly Salmon.  The Kenai Peninsula is dotted with fishing/tourist towns separated by beautiful mountains and rivers.

Many of these towns were mostly wiped off the map on Good Friday of 1964.  A 9.2 earthquake shook the region for 5 minutes and some areas dropped by literally 6 feet or more, changing the tides and rivers and causing tsunamis that devastated many of the towns.

As we drove from Talkeetna to Anchorage, we drove through Wasilla, where there was a rowing regatta called the “Moose Nugget” in progress!  A little more planning and we might have been the competitors from the farthest away. 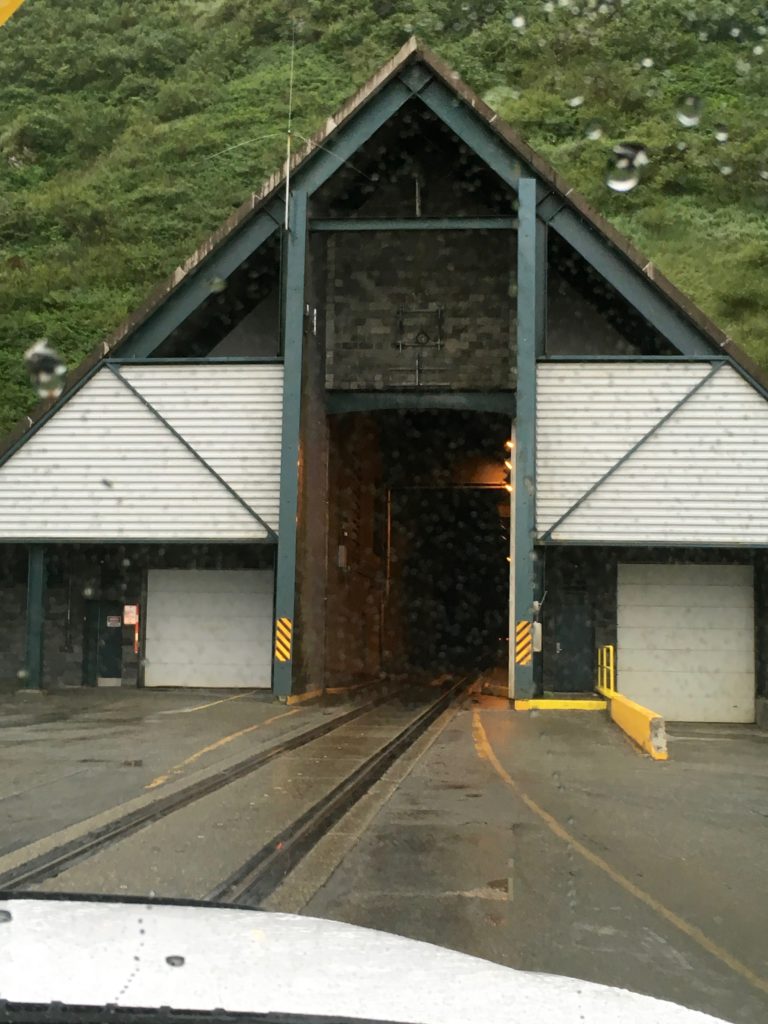 We had heard that there was a neat little town called Whittier – with just a single road in/out (or the ferry), so we decided to check it out.   With less than our normal planning, we came around a curve and found ourselves at the Whittier Tunnel..  It was only 1 lane wide and had a railroad track down the middle and is 2.5 miles long!  Luckily Sue was driving when our traffic got the green light.  As usual, she handled it with ease, even though the tracks tossed all 24,000 pounds of us around a bit.

We found the campground on the other side and were told we needed to go to the harbor-master’s office to pay.   Actually, there is a parking meter which you can enter in your campsite number and get your receipt. 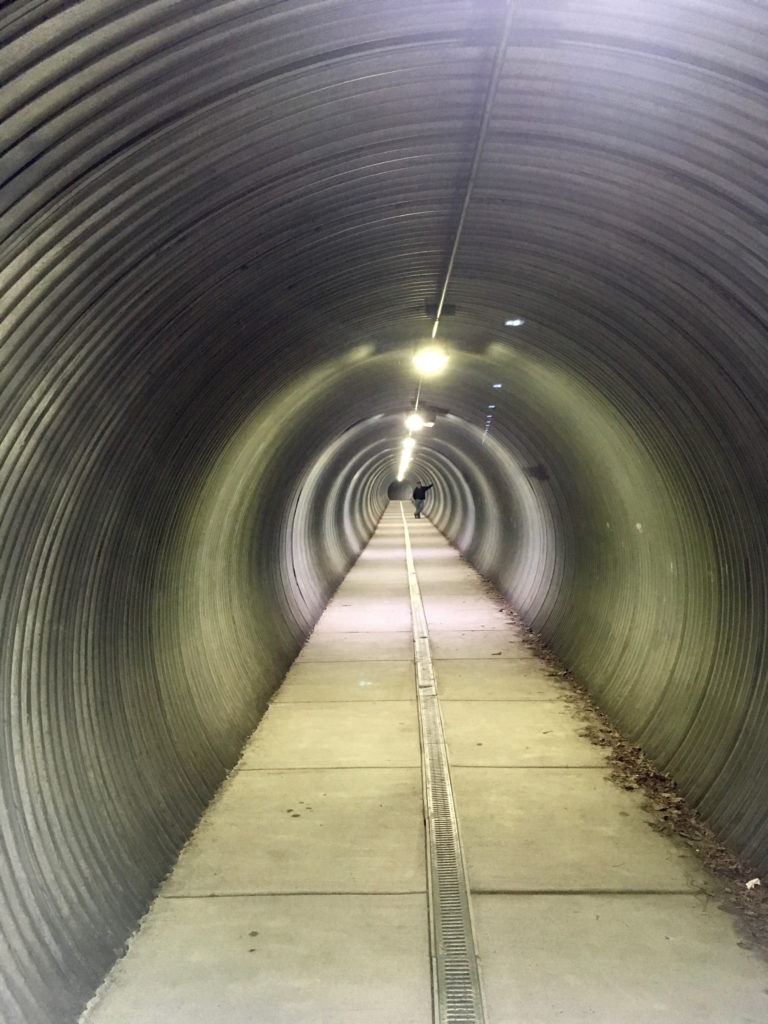 The town itself, is, um, interesting.  The major portion of the town is only a couple of acres.  Almost all of the permanent residents live in a single, high-rise condo building which has a military look to it.  In fact, the whole reason the town was created was to shorten the sea route to Alaska for the military.   Twice a day the Alaska Railway comes to town to drop off/pick up tourists.  Occasionally a cruise ship stops in as well.  The walkway/tunnel above runs between the town docks and the condo building area. It was long…and creepy!

The weather was foggy/misty (there’s a saying there: “it’s always **ittier in Whittier”) so we passed on taking the glacier cruise.  Instead we hiked “Portal Pass” trail to try to get a better look at the Portage Glacier.  It was a good hike but the fog never broke enough to give us a good view of the glacier.  However, we did see a bear across a pond that was headed the same way we were.  Lots of singing and clapping on that section of the hike!

We had a few days before our next campsite near Homer, so we headed towards the town of Kenai.  What we didn’t realize is that one of the salmon runs was starting and this was *the* place to be.  Alaska residents could “dip net” to catch their quota (25 for head of household, 10 for each other family member!)   The area was a zoo.  We ended up in a recreation center parking lot with all these fisherman, their families, their generators and their freezers!   It was amazing to see hundreds of people, shoulder to shoulder along the mouth of the Kenai River, hoping that a salmon would swim into their net.  The area was originally settled by Russians, so there is a very Russian Orthodox flavor to the towns. Many of the towns still have their russian names: Kalifornsky, Kasilof, Ninilchik, Nikolaevsk, etc.  We were told an interesting story on one of our excursions. Back when the area belonged to Russia, one of the main industries was selling sea otter pelts as they are very warm. They ended up being over-harvested. As the US population expanded west and began competing for natural resources, Russia offered Alaska for sale to the US also hoping we would offset Britain’s designs on the area. The deal was sealed in 1867.

The town of Soldotna, just up river, is built for fishing as well.  Walkways and stairs run along each side of the river to provide access to fishermen that want to “snag” their salmon.   Pretty much anyone we talked to just about fell over when we told them that we didn’t fish..

We took one day and drove up along the Cook Inlet to Captain Cook State Park.  On a clear day, you can look out over the inlet and see a line of volcanoes rising majestically from the sea.   It has been 15 years since the last one erupted. 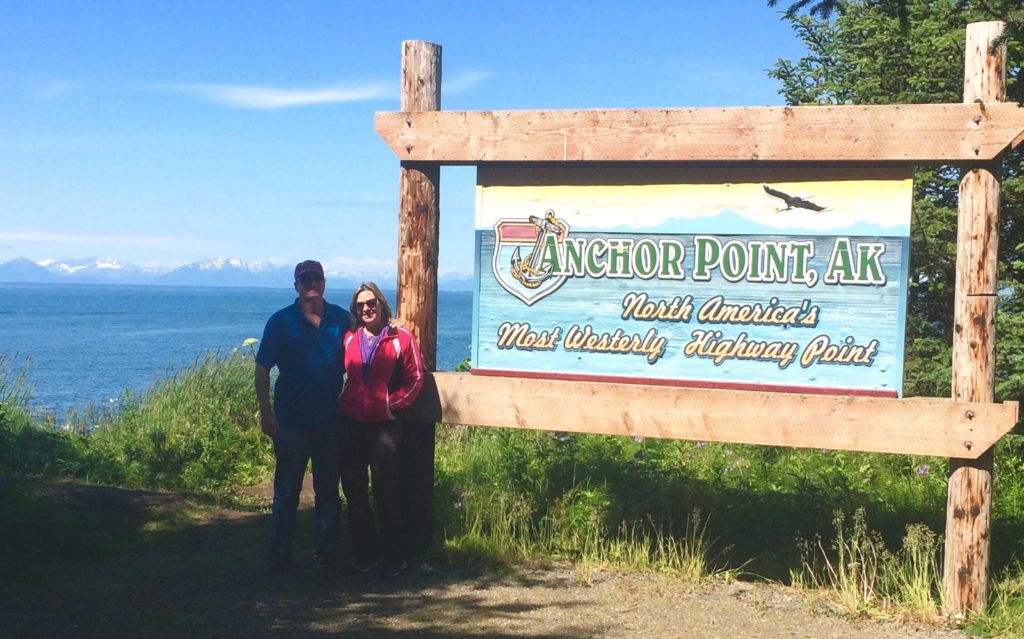 Next stop was Anchor Point – the westerly most point on the continental US highway system.   Just 9 months before, we were at the most southerly in Key West!   And farther east than Maine, and the western most in the lower 48 in Olympia, Washington…..

Here, with tide swings of 20 feet or more, the only way to launch fishing boats is for a large logging skidder to drive across the mud flats.  You disconnect your truck and park it, then everyone clambors into the boat.  The skidder connects to the trailer and takes it down a steep embankment and then out to wherever the shoreline is at the moment.

We were only about 20 minutes from Homer, so each day we found ourselves there.  More tourists and fishing!  The visitor’s center was handing out fresh flowers! Alaska has a short but enthusiastic growing season due to 20+ hours of daylight in the summer. An enterprising woman created a huge peony business in Homer since they are usually early spring bloomers but can be grown later into the summer up there due to the late start. Apparently, they are a very popular wedding flower and she ships all over the world.

As you crest a hill toward the town, you are given a breathtaking vista of the town on the bay surrounded by glacier-topped mountains, which includes a 4.5 mile long spit where all the beaches and marinas are.

The bay was so gorgeous we took an all-day guided kayak trip.  We left by water taxi across the bay and then paddled with a guide for most of the day.  Since we were the only ones on the all day tour, we got the guide to ourselves and could go at our pace, which was really nice. (he described some pretty scary scenarios of having larger groups and herding cats) Lots of seagulls, puffins,  sea otters and amazing vistas.  (Don’t forget to click on your favorites to see them in full size!) Editor’s note: because Jeff won’t make all the pictures big like Sue does – give us some feedback on which style you like best.

Another day we hiked through a sub-alpine park that was full of  wildflowers and glacier views.

There are lots of “flight-seeing” tours to view bears across the Cook Inlet.  Lots of folks gave good reports but we decided to skip that one… 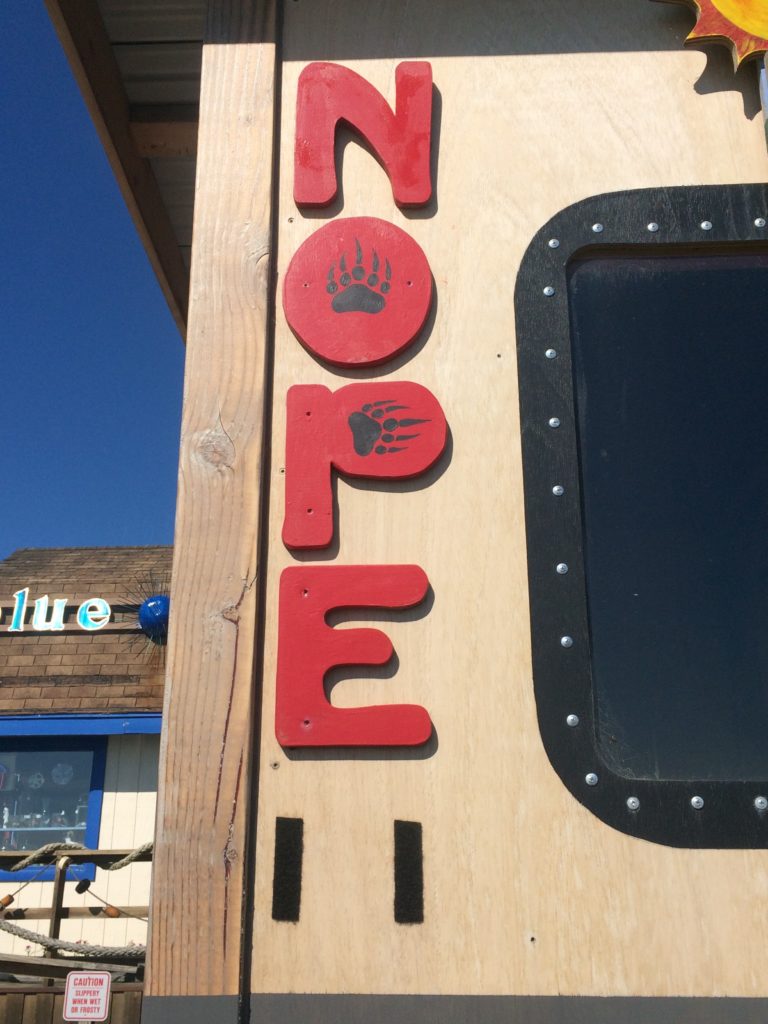 Our adventures on the Kenai were only just beginning..  Stay tuned for Part 2!

One thought on “Kenai – The other Alaska”