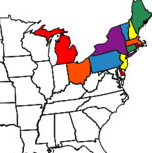 Our map is actually getting some color!!  We decided not to drive the trailer all the way to Rhode Island, so we left Columbus and headed towards eastern PA.

We made it about 1/2 way across PA as it was getting towards evening, so we found a campground and got settled in for the night.   The next day we finished the drive to East Stroudsburg..  But that wasn’t really our destination! 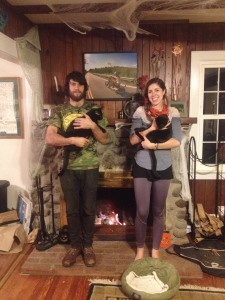 After working for 2 days and having a nice dinner with Jay and Virginia, we left early Thursday morning (without Monty) and headed back to Newport, RI for Vicky’s graduation from Officer Candidate School. 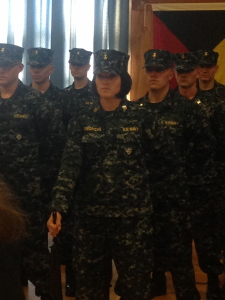 It was a very moving 2 days in Newport.  Much pomp and circumstance!  Vicky looked tough in her NWUs carrying her M-16 and she looked sharp in her dress uniform. 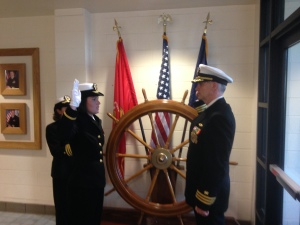 Vicky was sworn in by her step-father who is a retired Naval officer.  It was an emotional moment, standing in front of the flag as she recited the words. 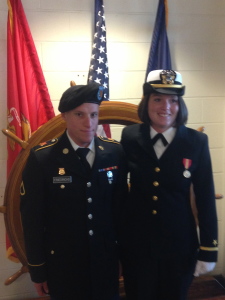 We also got to see Richard in his uniform for the first time.  Richard took part in giving Vicky her “first salute” as an officer, along with her drill instructor. The drill instructor was a very tough marine, with his hat tilted down over his eyes; he even has a gold front tooth! 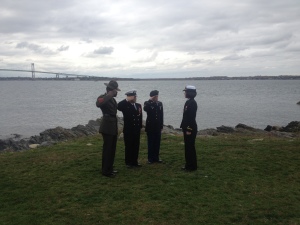 It really hit home that both of them could be in harm’s way defending our country.

We were blessed by having many family members and friends with us!  My parents, my sister Nancy, my brother and sister-in-law:  Peter and Irene, and Sue’s brother Richard.

Ray and Celeste, great friends of Vicky’s,  were able to attend with their daughter, as well as Vicky’s other grandfather, Fred, and her godmother,  Jenn.  After all the pictures were taken, we finished the day with a nice luncheon near the beach.  My brother,  Peter,  gave a moving blessing at our celebration lunch, imploring our leaders to make wise decisions. 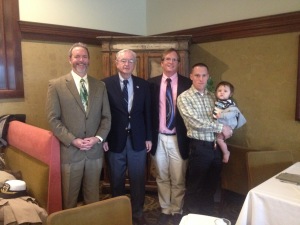 We had a rare opportunity to get a picture of 4 generations of Friedrichs men!

We got one last chance to spend some time with brother Rich, Lynn and their son, Paul while they put us up for 2 nights (thanks again!).  They get some 300 kids on Halloween, so rather than spend all that money on candy, we snuck out of the neighborhood and had a delightful dinner out!  Saturday morning we were back on the road to Pennsylvania to start our trek south.