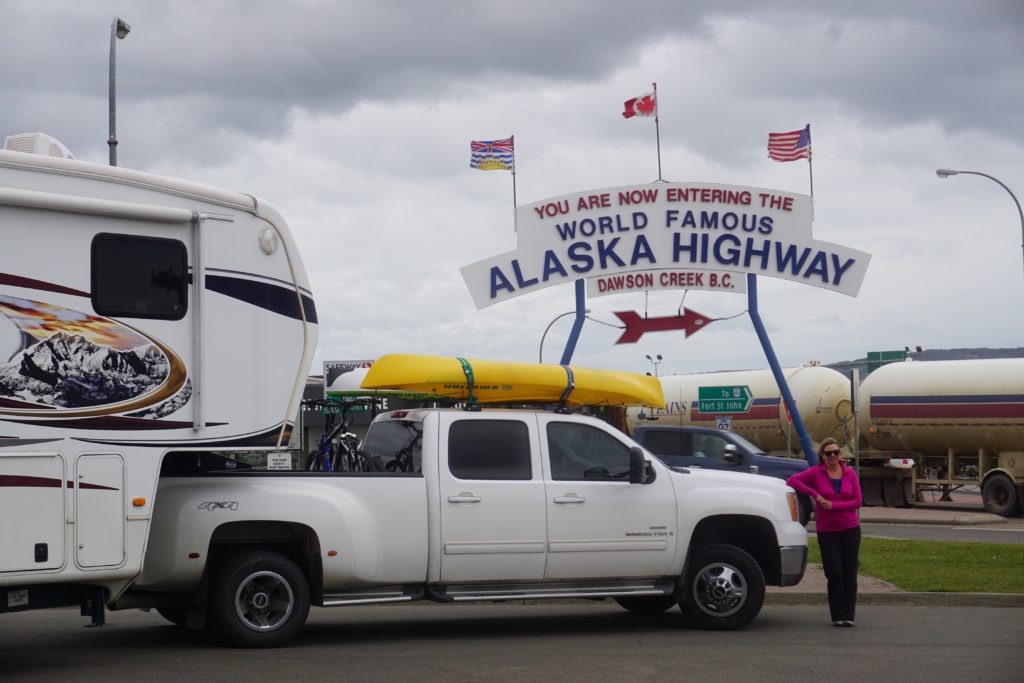 The Alaska Highway starts in Dawson Creek, British Columbia.  This year is its 75th Anniversary!  (Don’t forget you can click on any picture to see it at full resolution)

The Alaska (ALCAN) Highway is an amazing war-time story – after the attack on Pearl Harbor, the US realized the importance of having a stronger defense on the west coast and needed to get supplies to Alaska overland quickly.  So in 1942, they built about 1700 *miles* of road in just over 8 months! They literally used the trees they were cutting laid across the path as the initial road bed.   More than 10,000 men were assigned to the project.

Plenty of wildlife along the roads! 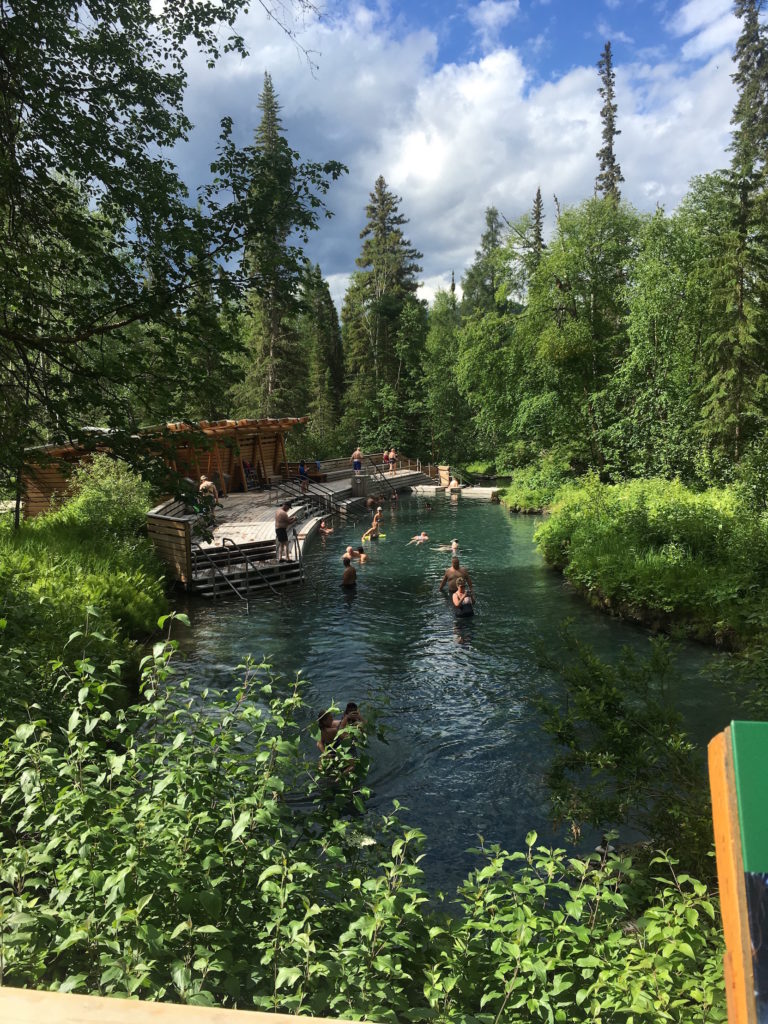 We did have a (self-inflicted) problem with the tires.  Our tire monitor system was vibrating the valve stems and breaking them.   One went on an inner side of the truck then two went at the same time on the same side of the trailer!  Jeff got really good at changing tires by the side of the road.  Once was a real NASCAR change because we had just passed a highway line painting crew and we didn’t want to get behind them again as we had to drive onto the shoulder to pass them.  Sue was watching for the crew and bears and horseflies while Jeff did the change. We made it with seconds to spare!

Luckily there was a shop open on a Sunday afternoon that could repair our valve stems.   Once we got to Whitehorse, Jeff removed all the trailer tires and had all 12 valve stems replaced with steel valve stems..  which he should have done before we started!

Watson Lake is also known for the “sign forest”.  Back when they build the highway someone put up a sign pointing towards home some 3,000 miles away.  Soon others were adding their own signs.  The town has embraced this and as of the start of 2017 there were over 84,000 signs of all kinds.

We knew about this ahead of time so when we were in Key West with Vicky we bought a sign to use..     4140 miles from here to Key West (and we didn’t go direct!) and still about 1000 miles to Danali!  See if you can find it when you pass through Watson Lake!  Jeff hardly has a project where he doesn’t draw some blood, and mounting our sign was no different.  As he was screwing it in, a large, loose wooden sign high on the post fell and bonked him in the head!

Mosquitoes!!  After Watson Lake, we stayed the night at a campground along a nice little stream.   We knew we were in trouble when we were swarmed by mosquitoes just after we got out of the truck.  Amazingly people were out sitting by campfires.  But the real horror came when they figured out how to get into the RV!  Somehow they just kept coming.  Even with the bug zapper, we could not get them all.  The smell of fried mosquitoes filled the RV.  At bedtime, we would kill a few and it would get quiet.  Then 10-15 minutes later, more found us.  We did not get much sleep!  (Thankfully, no picture!) 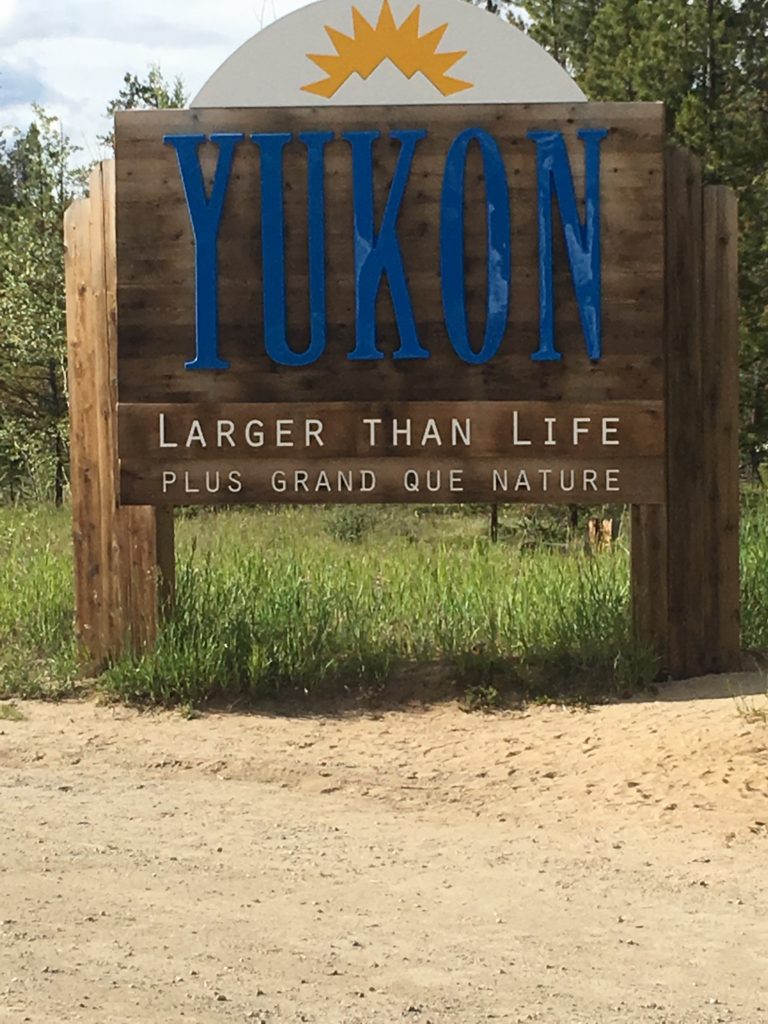 Our first day in Whitehorse, we kayaked down the Yukon River. The river was running very nicely, allowing us equal time floating and paddling. We saw 6-7 bald eagles along the way. They each seemed to have a ‘territory’. For one stretch, there were hundreds of ravens along the banks – cawing continuously. They were not only in the pine trees but also standing on the sides of eroding sandstone cliffs. For the first time I heard an eagle caw – he might have been challenging the ravens for territory. 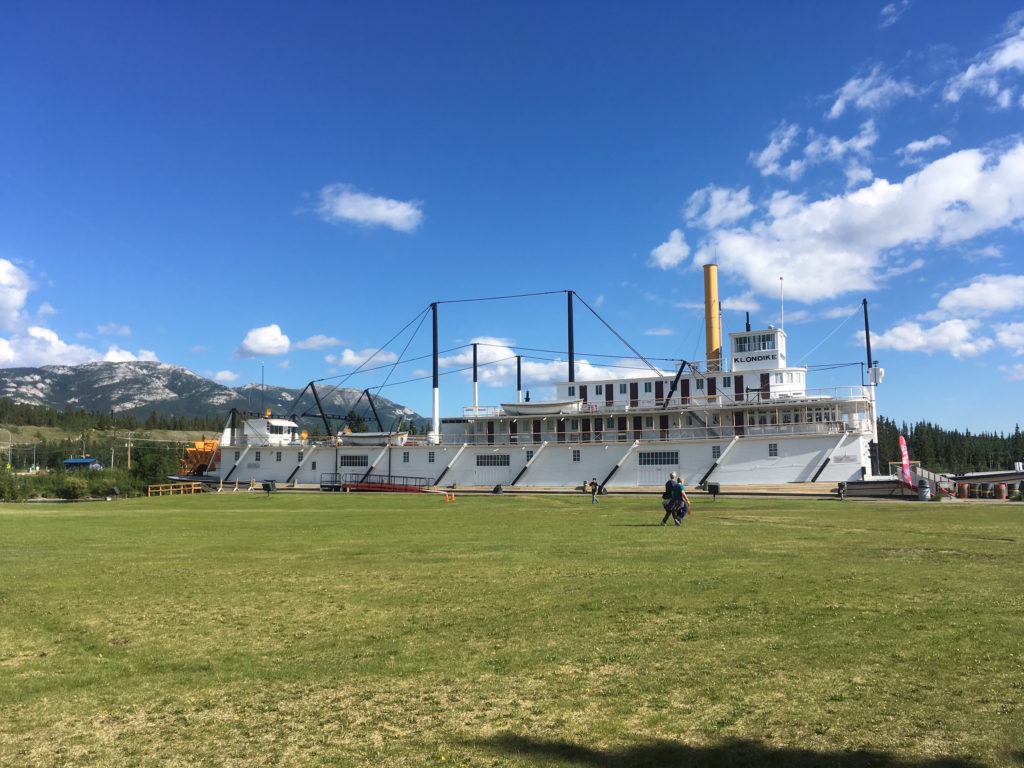 The Klondike was one of the paddlewheelers that plied the Yukon in the early days.  They would burn cords of wood each day coming upstream.  The stories about river travel were fascinating.  There is one section of rapids where they rigged a cable for 1000′ from the shore above the rapids.  The boats would then use winches to pull themselves up through the rapids.   And if a captain grounded the boat, the deck-hands would jump off, rig cables to trees and they would pull themselves off.

Many of the ships and dredges were built elsewhere and transported here – then reassembled!

Whitehorse is an interesting town – the capital of the Yukon. It is very walk-able and has a variety of businesses which obviously support many of the surrounding remote areas. Like many northwestern Canadian towns, it came into its heyday during the gold rush of the 1800s. 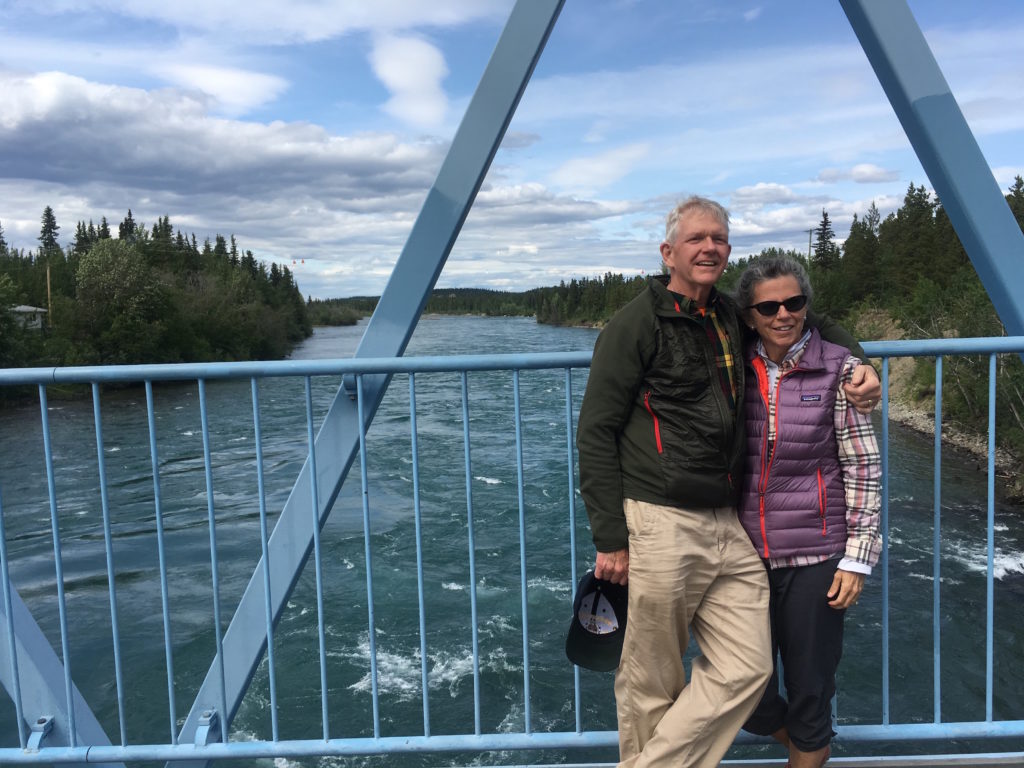 Met fellow RVers Rick and Mary and spent a day exploring the town.  Ended up at the salmon fish ladder.  Fish have to swim almost 2000 miles up the Yukon just to spawn and then die.  What some creatures go through for sex!

We were in Whitehorse for the start of the Yukon River Quest.  This endurance race down the Yukon River from Whitehorse to Dawson City is about 500 miles.  Canoes of all sizes, kayaks, and even stand up paddle boards compete and it takes them 2-3 days to complete!  (remember, it is light 24 hours…).    We then were in Dawson City for the finish!

At dinner that night, we said to each other – “They are still paddling”…

When we paddled (a much shorter section!) of the Yukon the day before, Jeff hitched a ride back to town with one of the competitors.  Alex and her husband finished 2nd in the mixed 2 person canoe event in about 49 hours.   At dinner the following night, we got seated with “the 2 johns” from Edmonton – a judge and a lawyer, who took over 3 days!    Interesting stories from all! 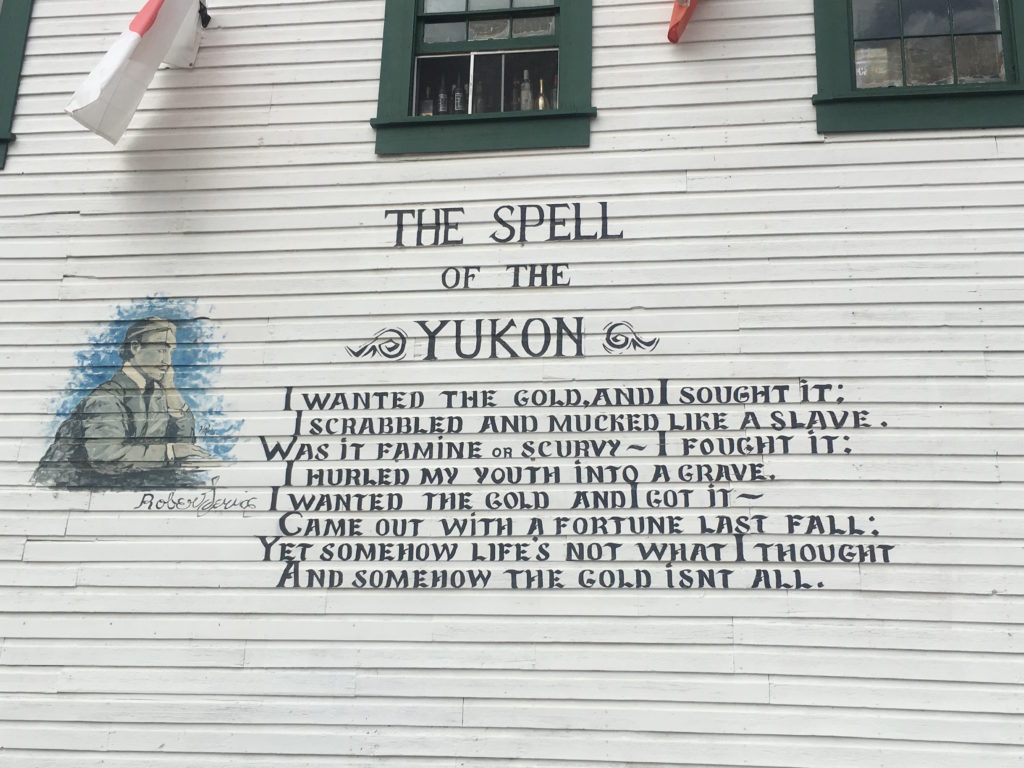 We deviated from the Alaska Highway and took the Yukon Highway to Dawson City.  This little gold rush town was quite amazing.

On our way, we passed one of the checkpoints for the river race and we said to each other – “They are still paddling”…

We also picked up a hitch-hiker from that area, figuring he was involved in the race.  Instead, Federico was hitch a ride to visit a woman in Dawson City.  We had a great couple of hours exchanging stories.  He is a ski instructor/host in the Italian Alps for an Irish travel company.  In the summer, he backpacks the world!

We were there for Canada Day (Canada’s 150th!) and got to watch their parade!  Wolfeboro’s parade is huge compared to this.  If only I had a few more days, they really could have used a “lawn chair brigade” in the parade.     … “They are still paddling”…

We toured one of the gold dredges, built almost a century ago.  It is amazing what was built and brought to the Yukon in search of gold.  There are miles of piles of “tailings” throughout the valley.   As technology has improved, they believe much of the dirt has been mined 5 times!   After this dredge completed its work on the nearby Klondike River, it was disassembled and rebuilt at the bottom of the Bonanza creek.   Amazingly it was run by electricity, which would be generated nearby!

“They are still paddling”…

Dawson City itself has one paved road, with the rest just dirt.   The sidewalks are all wood and they are really trying to keep the look of 100 years ago. 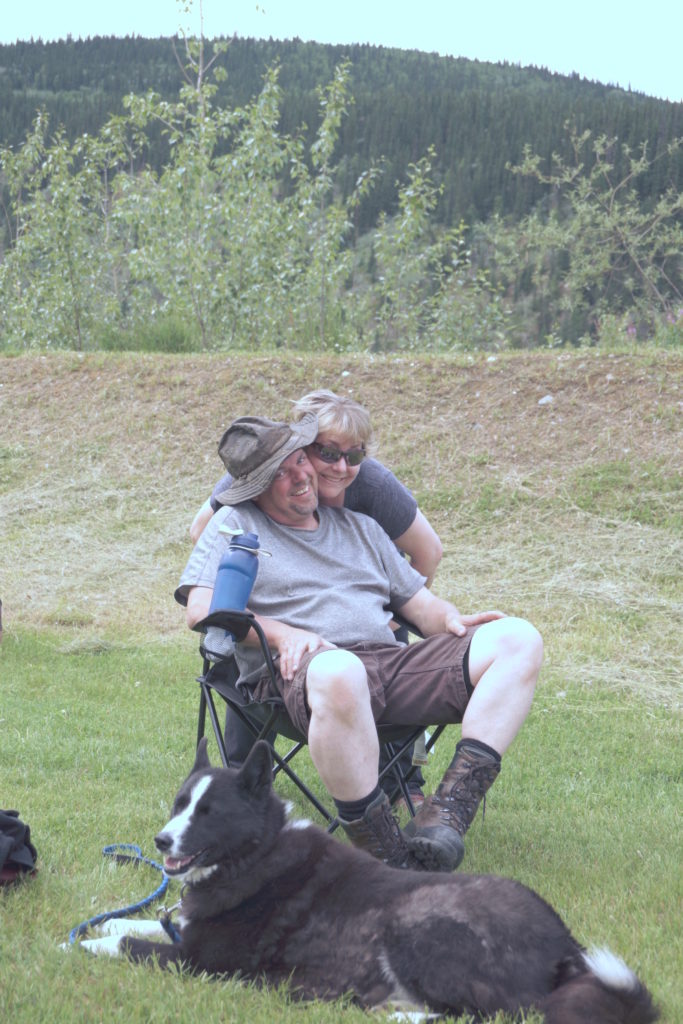 Its always fun to meet new people.  Charles and Lucy were from Whitehorse, but in Dawson City for a month.  They are chimney sweeps, but also live mostly off the land.  He has a “trap line” in the wilderness that he uses in the winter and they hunt all the big game and regularly fish.   They have 6 freezers at home to keep all of their food.  They have not bought meat from a store in 10 years. They treated us to a bison-burger dinner at their place and we laughed and talked late into the (still light) evening. They also offered a free stay at one of their remote cabins any time we want, which I hope we get to take advantage of!

Jeff even spotted Tony Beets’ wife, Minnie,  in the grocery store.  No pictures though – she looks as grumpy in real life as she does on TV! 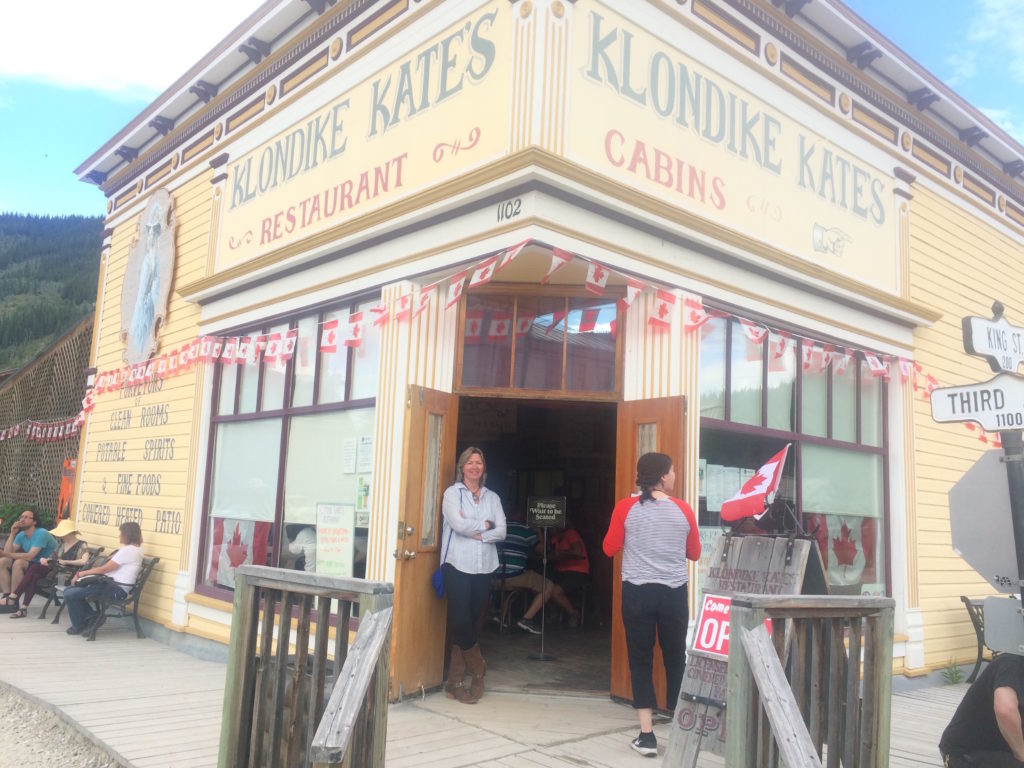 Our last night was fun filled.  “Klondike Kate’s” restaurant was very busy, so we were seated at a table with 4 other people – the John/John team that had just gotten off the river after paddling for 3 days and the granddaughter of the museum owner and her husband.  It was a spirited table with conversations running the gambit including politics, comparisons between the US and Canada and the race, as well as each group’s story.

Then it was on to “Diamond Tooth Gerties” for their stage show (and a little blackjack for Jeff).

Finally we drove up to Midnight Dome.   The following pictures were taken at about 11:30pm!   And we ran into the couple we had dinner with.  And some people were still paddling!