30%-ers – That is what they call the lucky few that get to actually *see* Denali while at the National Park – and we did!   And moose..  There were a fair number of moose around the entrance area which always causes what we call “being Yellowstoned” – stuck in traffic as some other tourist tries to get a picture of a far off animal.

We had originally planned to stay 30 miles inside the park but due to some confusion with the size of vehicles allowed, we had to re-arrange our plans.   But it worked out fine as it gave us a different experience. 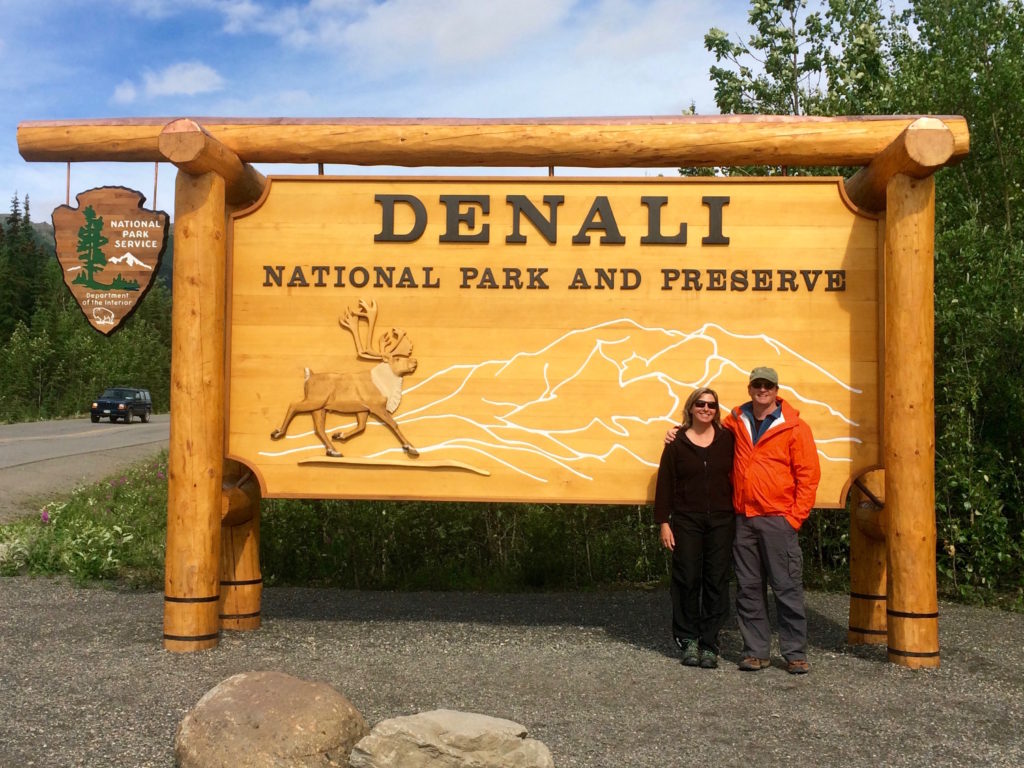 After a short drive from Fairbanks, we stretched our legs a bit on the Savage River trail. The wildflowers were gorgeous!

The next day we climbed the Mount Healey Overlook trail.  It was a moderate hike right from the visitors center.  As we got to the top, there it was – Denali with a wisp of clouds to the north!

We had also signed up for a “Discovery Hike”.  This is a park ranger led hike in the park which was recommended by some fellow travelers.   We needed to take a 2 hour shuttle bus into the park during which we saw a few animals and we were dropped off at a little pull-out.   It was literally a hike where the ranger and our group of 6 explored an area of back-country.  There are no trails; the ranger has no specific plan;  the group had a variety of fitness levels…

First we all applied bug spray while being enthusiastically attacked by large mosquitoes. The our guide gave us a review of how to react to various wildlife encounters. Bear: raise your arms and talk calmly to the bear, backing away slowly; moose: run like hell in a zig-zag pattern; wolf: scold it like a dog…”Bad Wolf”!  We started up through a game trail which quickly led to climbing up “scree” – a variety of loose rocks left by a glacier.   It got very steep and traversing was difficult, so Sue and I veered off from the rest of the group and climbed straight up – a pretty good workout and a little terrifying at times.  We managed to get to the top of the ridge well before the others made it, but we rejoined them for the rest of the hike..

The neatest part of this hike was that we were now on true tundra.  As we hiked it was like walking on pillows.  The ground was soft and thick with vegetation.  If you stuck your finger down through it you could feel how quickly it got cold underneath. How cool is that?   We had lunch overlooking the “Polychrome” mountains watching for birds, bears and other animals. Again there were flowers everywhere. The Forget-me-not is the state flower, and we learned bluebell are edible: they taste a bit like green beans.

We then worked our way out and had to bush-whack through an area of tall brush, which was not a lot of fun and reminded Jeff of his days on Outward Bound…  We made it back to the road and flagged down a shuttle bus for the ride out.   We got back just in time to see the dog sled demonstration – they still actively use dog sleds in the winter to patrol the park!

And of course, as we walked back towards our truck, there was a moose eating along the path.  We finally hitched a ride with a ranger to get around her.

We met up for dinner at the 49th State Brewing Company with some fellow RVers that we had been messaging with via Facebook.   In front of the restaurant was the bus that was used in the movie “Into the Wild“.  Inside were some of the story boards telling about the fateful adventure.

The next day we took a shuttle bus all the way to the Eielson Visitor Center, 4 hours each way!  Much of the drive is on a 1 lane dirt road, sometimes with extreme drop-offs,  where the shuttle buses are having to squeeze by each other!  Denali was clouded over and we saw a few distant animals, including bears and caribou, but nothing much picture worthy. We did get a nice, up-close view of a short-eared owl flying right next to the road. It was pretty neat to be so far out into a true wilderness the size of Vermont. The buses are the only access beside hiking.

Next we headed towards the town of Talkeetna.  Our primary goal here was our sightseeing flight to Ruth Glacier on Denali’s south side.  After parking the RV, we had a bit of truck trouble though.  The truck suddenly died and wouldn’t start again.  Jeff had to ride his bicycle to the local auto parts store, buy a new fuel filter and tools and replace it.   Long afternoon!

The flight the next day was amazing.  The folks at Talkeetna Air Taxi were great and we took a ride in one of their DeHavilland Turbine Otters.  Jeff got to ride in the co-pilot’s seat on the way to the glacier.  It was a spectacular ride, landing on the glacier and getting out to walk around. The only sad thing was haze from fires in Canada reduced visibility over distances some.

The town of Talkeetna is an interesting little Alaska town – its honorary mayor was a cat until just this summer!  Tourism is certainly the primary business.

We had also heard that we could take a trip on the Alaska Railway called the “Hurricane Turn”. This is one of the only “flag-stop” trains left in America.  It travels about 80 miles through the wilderness, making stops as needed to drop off and pick up passengers (campers, homesteaders, guests, etc).  If you want a pick up – just flag it down!   It was a very enjoyable ride that took some 6 hours, and they encourage you to bring food and beverages of your choice.   We had a nice bottle of Chardonnay! 🙂  You could also stand in the baggage car and take pictures out of the open doorway.

The conductor has worked on the railroad for over 40 years and provided a great commentary along the way, giving us the history of the railway and area.  One of our favorite quotes of the day was that we likely would not see any bears because of the noise of the train, and if we did, it would likely be the “east end of a west-bound bear”. 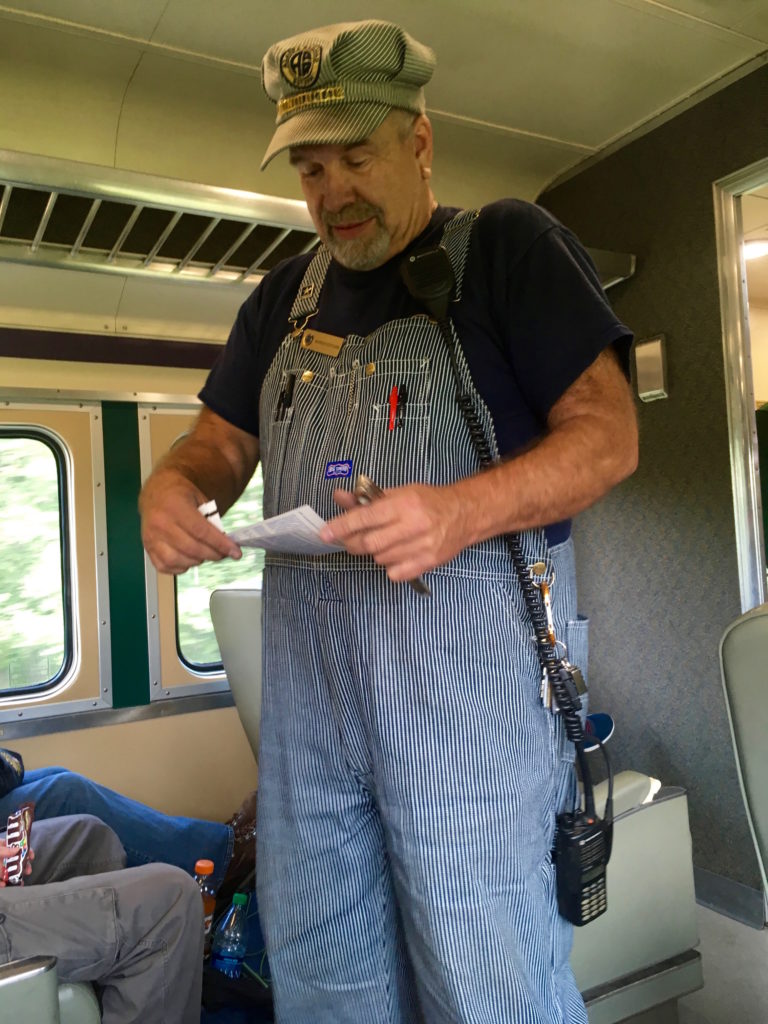 We even stopped at one VERY small town (population 2) – where the wife sells the books she has written since leaving the lower 48 and homesteading along the tracks since the early 1960’s.

The train stops and reverses direction high above the Hurricane Gulch, on the Hurricane Turn bridge.  At another stop along the way, we could see the salmon in the creek.   Since this is also the main railroad line between Anchorage, Denali and Fairbanks, we had to pull into sidings and wait for the fancy tourist trains from the cruise ships to go by. We overheard one of the passengers talking about homesteading in the area and taking the train every few weeks to get provisions.  She also talked about selling her house – and had just reduced the price to around $200,000! Now we don’t know how big or nice this house is, but there’s no electricity out there and the only way to or from is on the train. Seems house prices are crazy everywhere!

One evening we found access to a small lake and enjoyed an evening paddle with some loons and other birds.   We also went for a bike ride on what *looked* like a dirt road on the map.  At one point we had to walk but it lead us to a pristine, beautiful beaver pond. We were also about 6 miles into the woods and didn’t have the bear spray! 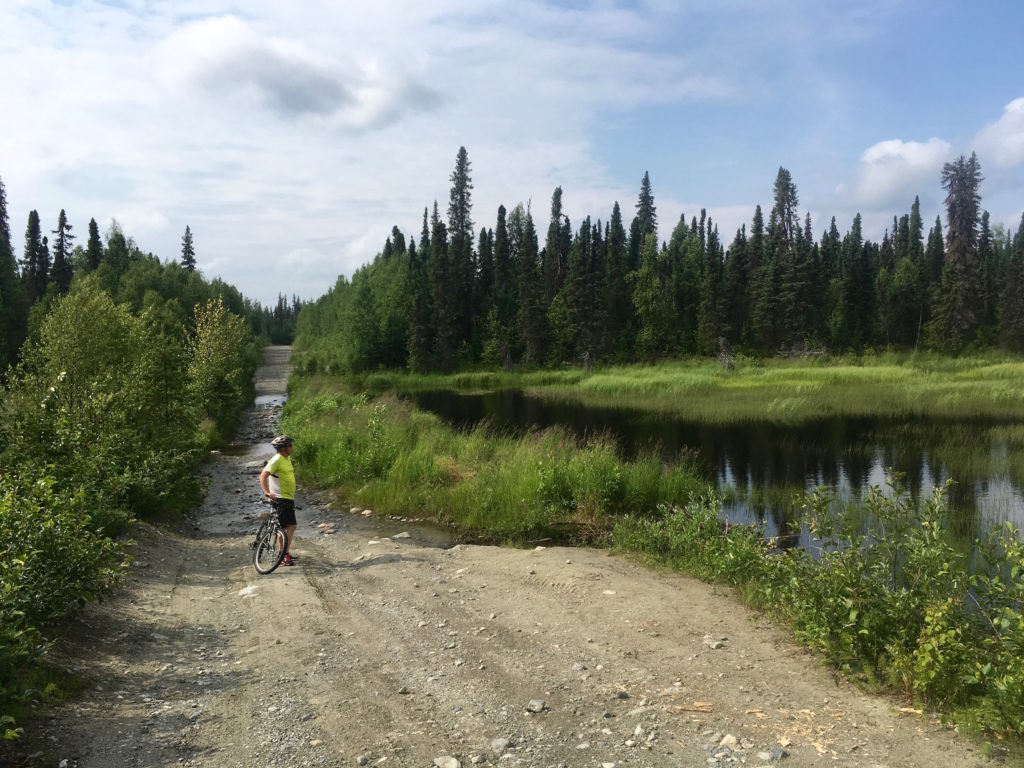 A big part of the fun of traveling is seeing all sorts of little things.  Like the bridge on the Hurricane Turn train -of course it had the number 69 in it..  (this number pops up in Jeff’s life *all* the time!    Or this incredible “rotel” – we looked it up – it is a “rolling hotel” that they use a fair amount in Europe.  (Jeff saw it in Great Falls too, but was too slow to get a picture of it then…)