It was a year almost to the week that we took our first “trial” trip in Monty to Delaware.  Then, we had Shadow, and stayed in Rehoboth Beach. This time our goal was to spend some time with Julia and Mike as we made our way south. Finding open campgrounds north of the Mason-Dixon line after mid-October has been a bit of a challenge.  This led to one of our sketchier locations, the Delaware Auto Court Motel and Trailer Park, which is at the junction of 2 busy roads, a railroad track (luckily not as busy) and a fire station (complete with call-out siren).  The single story, 1950’s style motel itself does not advertise hourly rates, but I bet they would give you one if you ask!  (Of course, you would have to get through the language barrier with the owner and pass your money through the little slot at the bottom of the bullet-proof window!)

The RV park was a circle in back of the motel with about 25 spots.   Although the sign in the offices says that the maximum stay is 5 weeks, it looks like some units have been here 5 years (or even a lot longer!).   Although the grass was overgrown (our last 3 locations had beautifully kept grass), we do have water, sewer and electrical service, which is all we need to make a place home!  And surprisingly, with the windows closed, it really wasn’t all that noisy (except during the day when one of the other residents was working on his 1973 Nova SS dragster – “Vroom!   Vroommmm!!!”)

While we were in the more, er, commercial area of New Castle, the “old town” is quite nice.  This is where William Penn is said to have first set foot in America.   There were cobblestone streets, old churches and pubs, and a nice waterfront park. I met a new kind of tree which had these strange fist-sized seeds!

We had some good, quality time with Julia and Mike – I got to have lunch with her at Citibank. On our last day we had a wonderful, early Thanksgiving feast at Julia and Mike’s.  Jay and Virginia came down and we spent the afternoon and evening cooking, eating, talking, eating, drinking, eating, doing handstands, eating and talking.   Jay brought the centerpiece:  a turkey-mum! 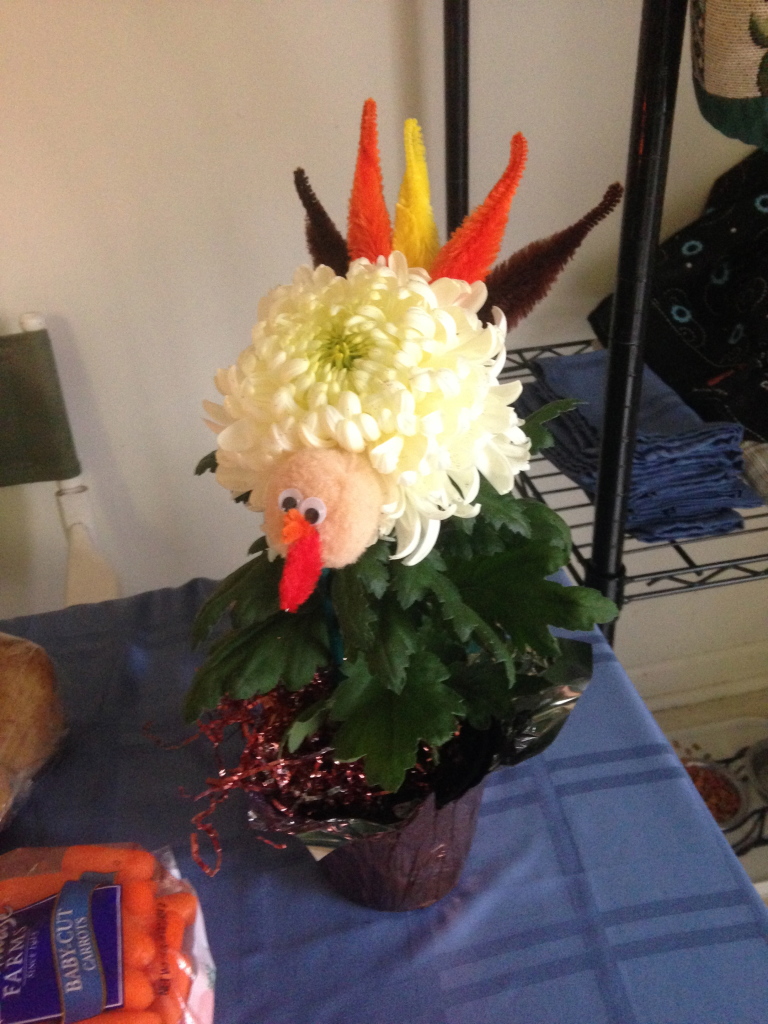 Now we’re off to Virginia Beach, and hopefully some warmer weather…