There are several state and national parks in California showcasing the amazing redwoods. We stayed at a city park right on the ocean in Crescent City, which is near Jedediah Smith Redwood State Park and Prairie Creek State and National Park. We learned that redwoods grow on the coast, and giant sequoias grow at higher elevations inland. The redwood forests were breathtaking, and we were again blessed with warm, dry weather.

Our camping experience, however, was one of the more interesting….

Being October, Shoreline RV Park was winding down for the winter months. The shabby little front office was run by an older lady who, while not unfriendly, was brusque and clearly looking forward to getting outside for her next cigarette. We chose a spot in between two other rigs where our living room window faced the Pacific Ocean. While we were backing in, our next-door-neighbor came over and boisterously introduced himself, standing a little too closely… he offered his help if we needed anything.

The first thing we noticed was a persistent (every 10 seconds) electronic tone from a fog horn across the inlet. It was loud. And there was no fog.  This turned out to be slow torture for the entire week we were there. We had to play Reiki music inside all day, and at night, Sue needed not only the white noise machine on high but also ear plugs in order to sleep. One night after work we drove a few miles up the coast to a park for mountain biking and we could still hear it.

The next day Roy, who started a conversation every time we met, went on a tirade about how he was getting evicted for being “too annoying” to his neighbors. He yelled and swore about how it was not fair and what jerks the park manager and city manager were. He asked if I’d thought he was rude, and I said no. He then asked me to write this down for him since he was getting a lawyer to fight having to move.  Ug. He lived there full time.  The moment he got in his car and left, an older man I’d never met knocked on our door and said, “Here’s some tuna – I just took it off the smoker.” I said thanks, and I had to stop him to ask who he was. You guessed it:  the park manager. Oh, jeez. Drama now.

The rest of the week was awkward every time I saw Roy because I hadn’t written ‘the note’ for him.  Also, we kept hearing a low, thumping music base: sometimes late at night, and other times early in the morning. After investigating, we determined it was coming from Roy’s trailer! It must have been a video game or something because the music was always the same. But seriously, you’re in trouble for annoying your neighbors and you leave that playing with your windows open all the time?

Crescent City is a good-sized, working class town. The main industries are tourism, fishing and logging. I’ve noticed a lot of western towns and cities have murals all over their buildings, which brightens up the landscape.

We spent two weekend days exploring the redwood forests. It was hard to capture the scale with pictures, but we tried. 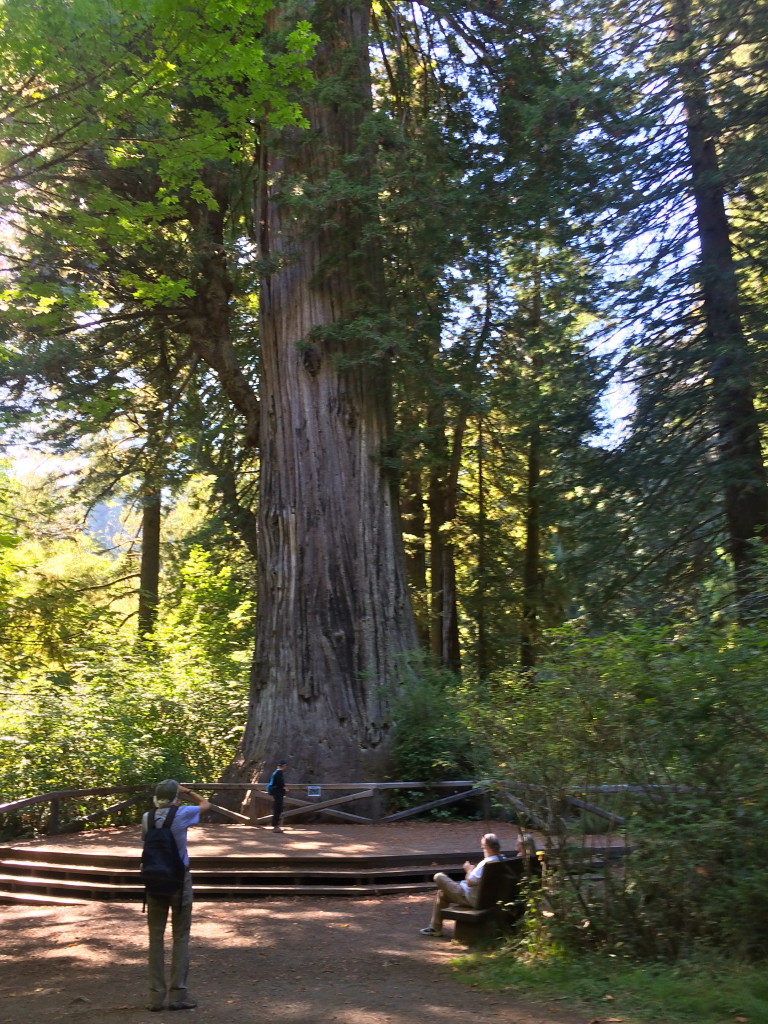 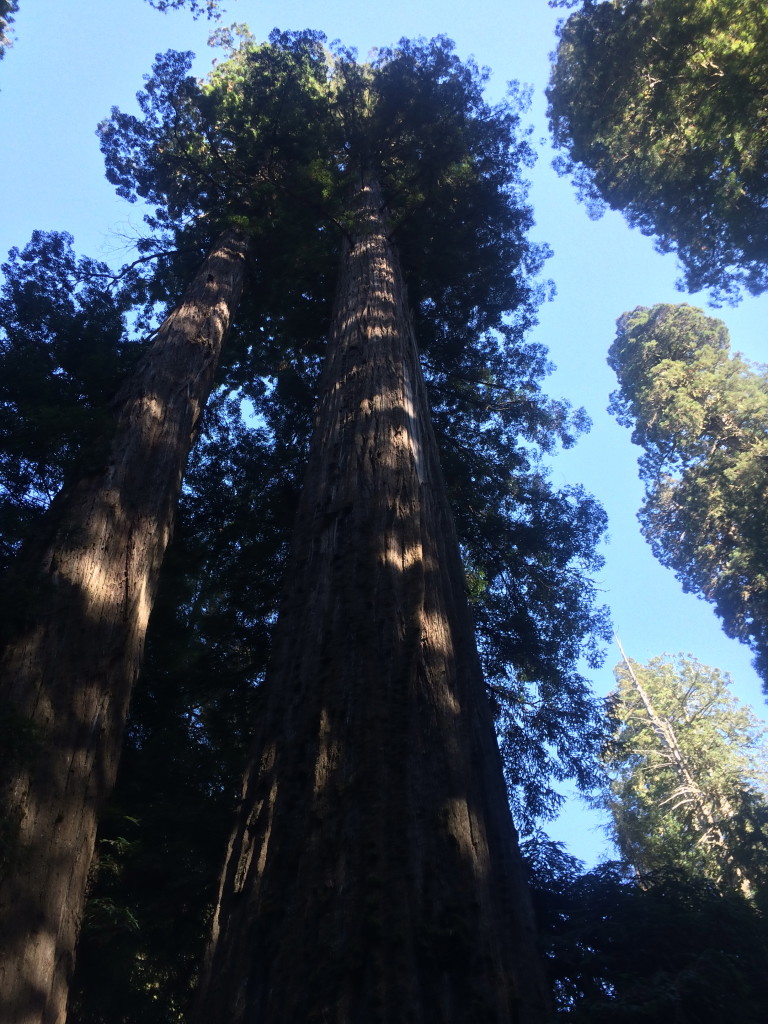 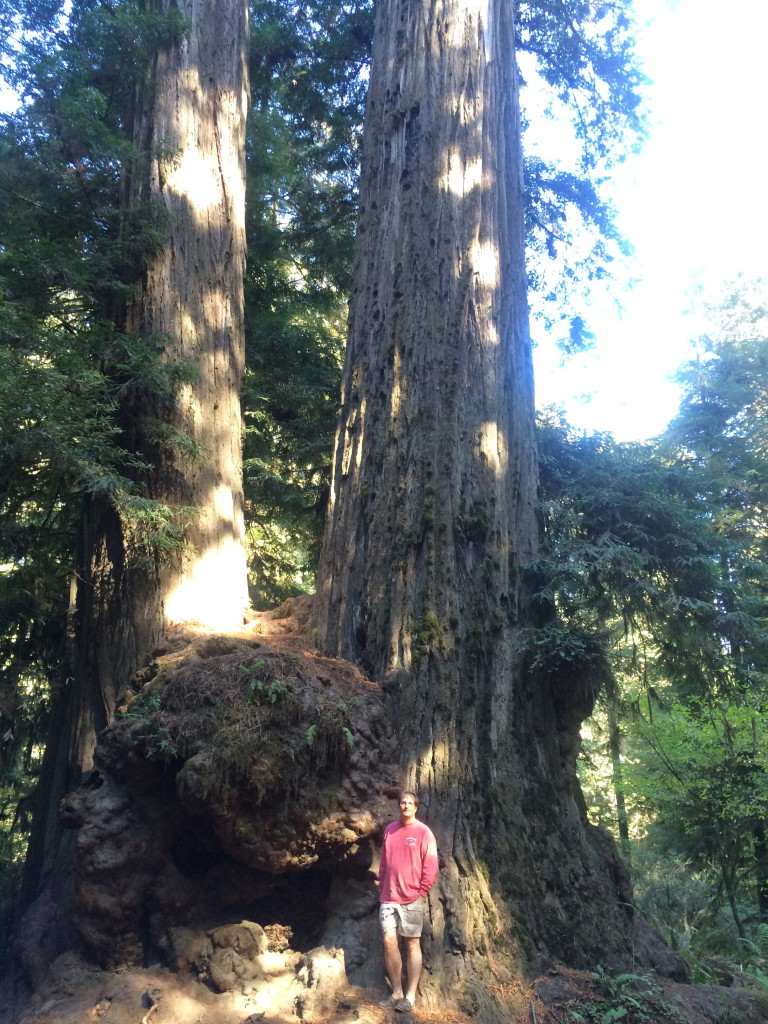 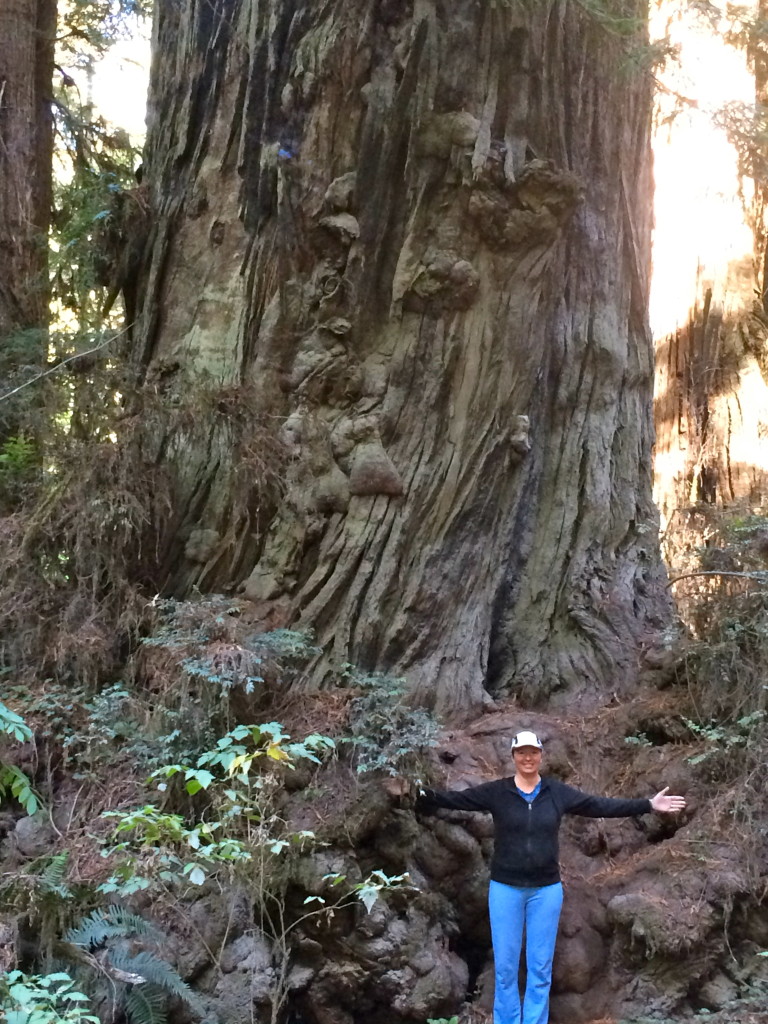 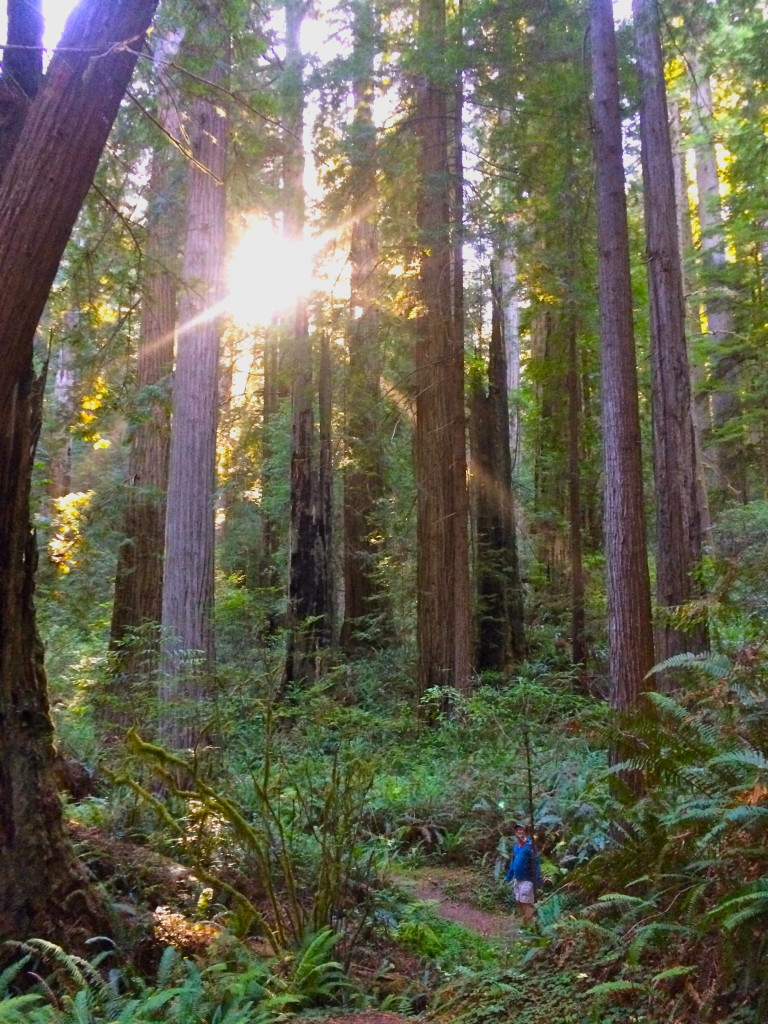 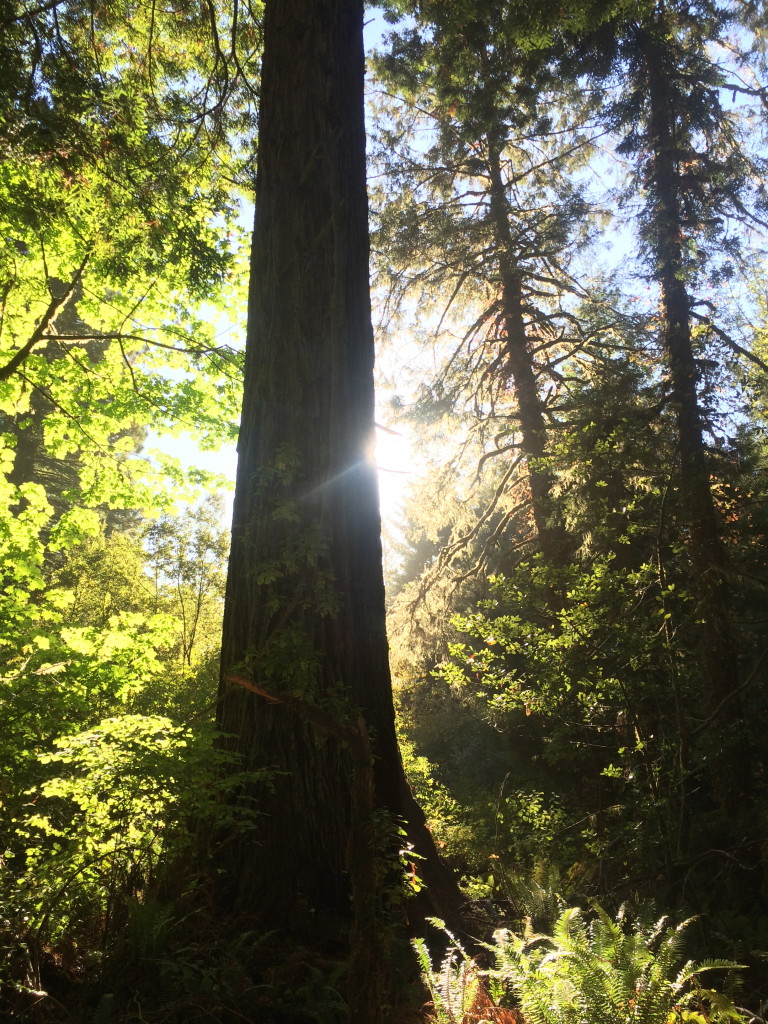 On the advice of the local visitor center, we went to “Fern Canyon”. After navigating a bouncy, narrow, winding, 6-mile dirt road during which we had to drive through several streams (!), we came to this area. It’s a canyon carved out over eons by Home Creek through sedimentary soils. Ferns and other water-loving plants line the walls – it’s so unusual this location was used in Jurassic Park 2. We hiked in, having to wade through the creek, and had lunch among the lush surroundings. 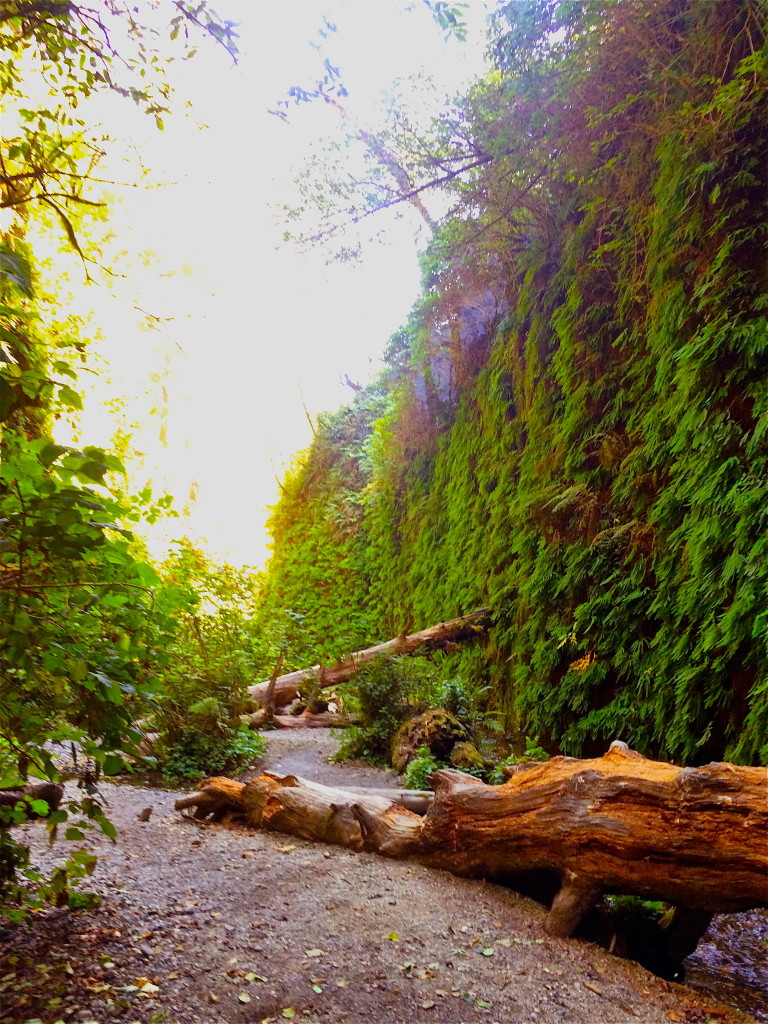 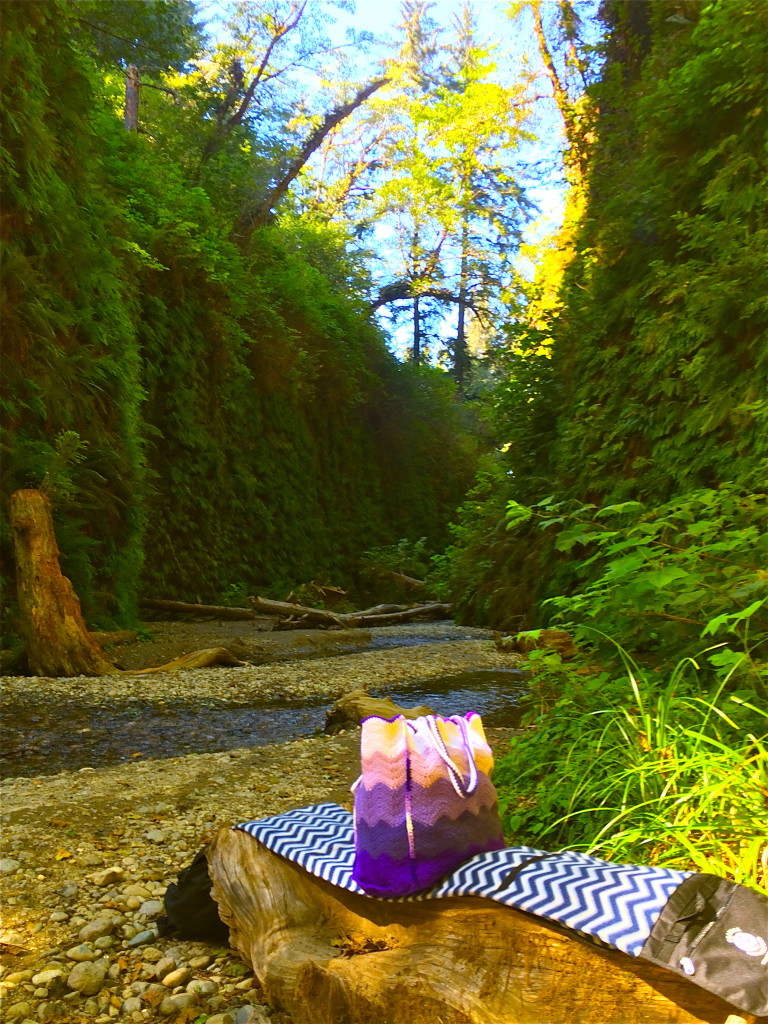 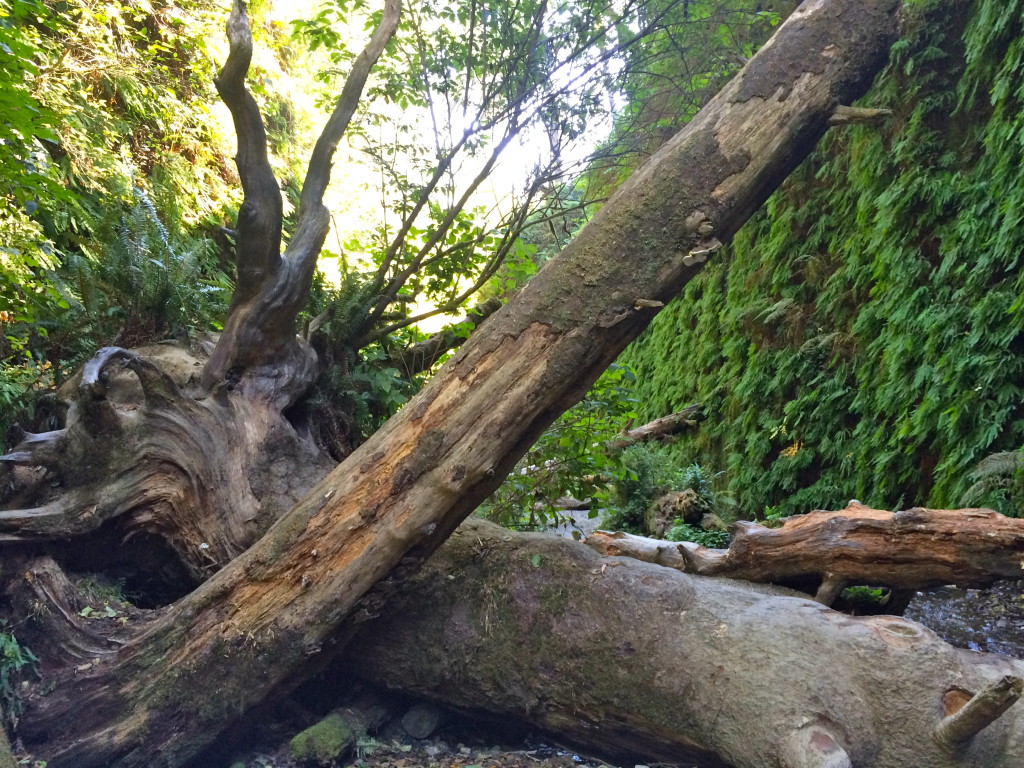 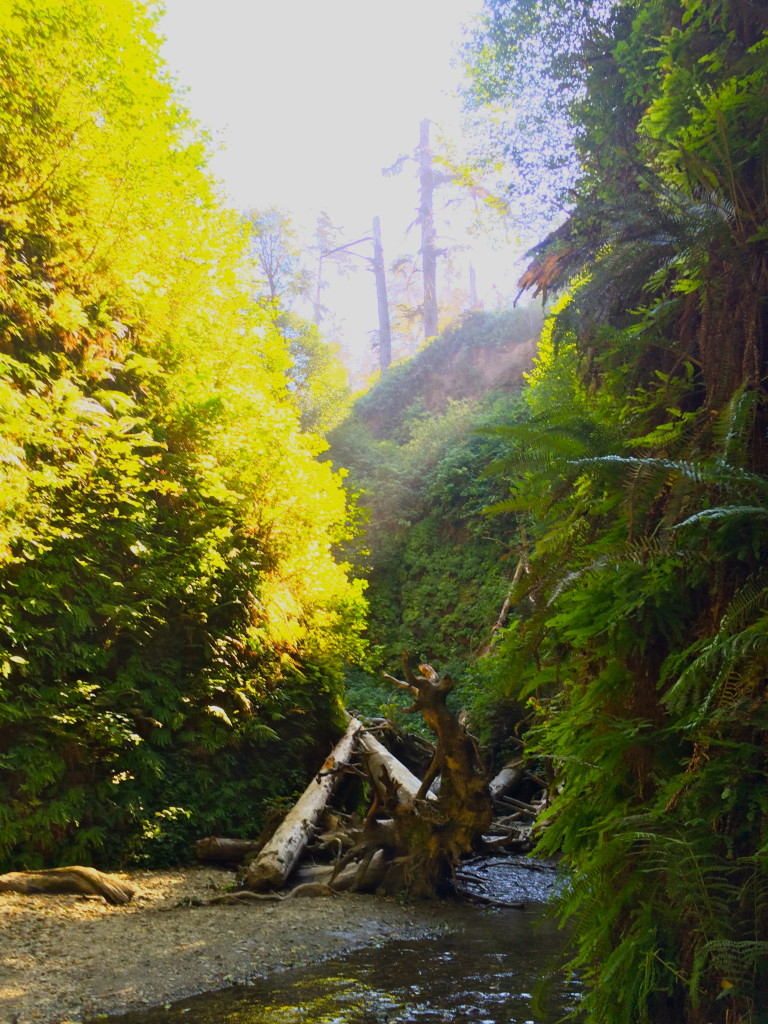 After this cool hike, we took a trail a short way out to the beach, and stumbled on a huge elk! He was digging his antlers into some wet grass and throwing it on his back, and finally just laid down in a puddle to cool off. He didn’t care at all that we were there. 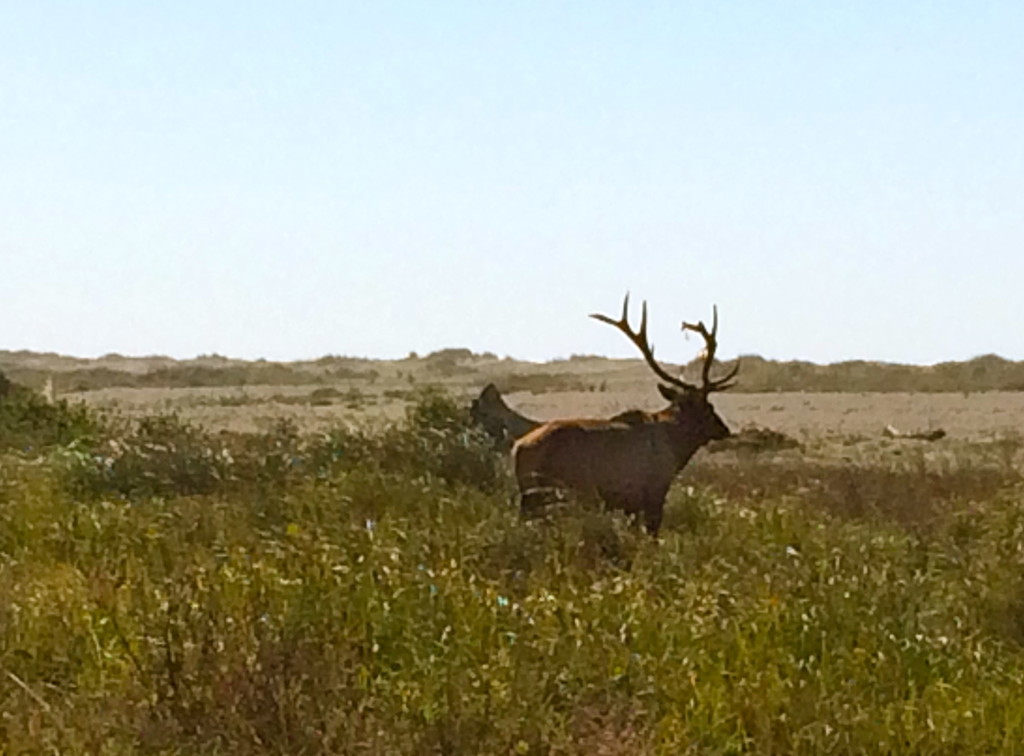 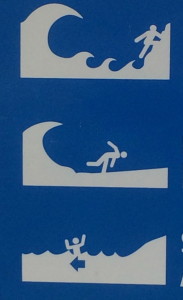 As we drove along the shore, we kept entering and leaving the “tsunami hazard zone”.  Again, stick man takes the hit for showing us what can happen…. 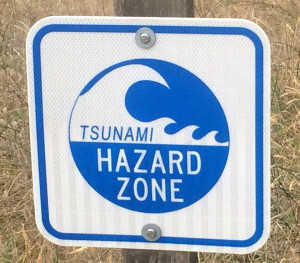 Roy gradually moved his belongings somewhere as the week went along. I gave him the note (without my phone number) the day we left. He then mentioned that they told him he had to stay somewhere else for 6 months. That is a totally different story! Often there are tax reasons why a park can’t have permanent tenants. Maybe they were using this as an excuse to get rid of him, but there’s no way he’s changing that in court!

After hooking up and leaving Crescent City, Sue drove Monty south through some of the redwood parks – an exciting drive with narrow, curvy roads, but worth the view. 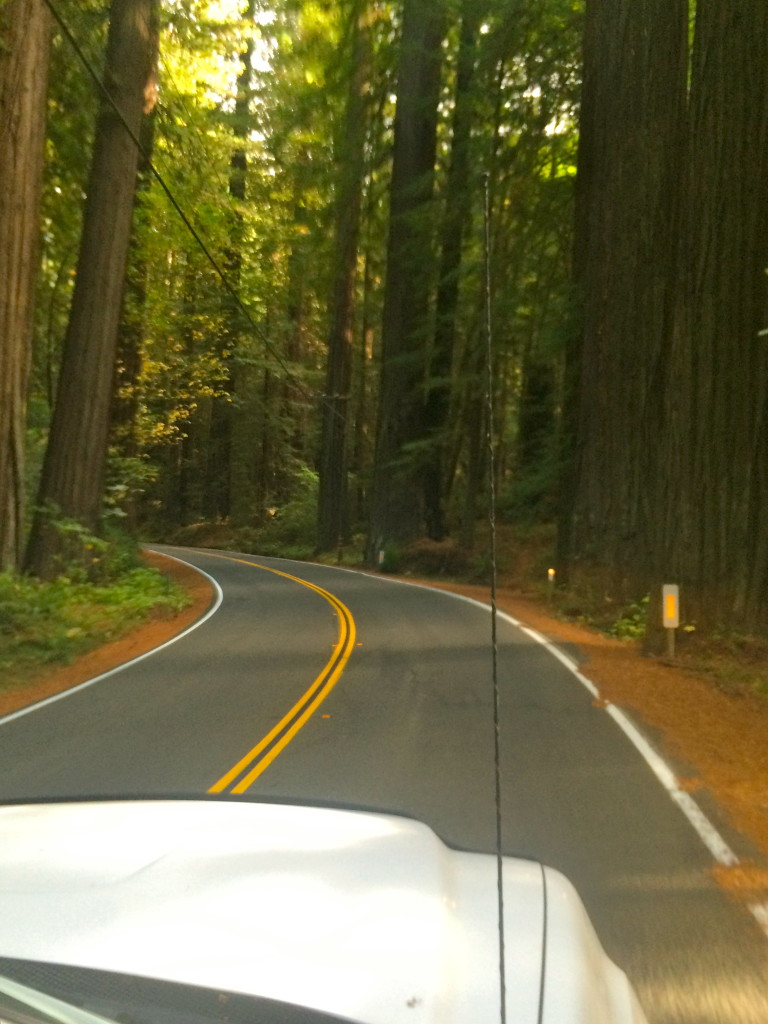 We’re off to try our first “Escapees” (SKP) RV Park near Yosemite.