We had originally planned to come here for our honeymoon, but never made it.  So it was fitting that we were here on our 11th anniversary.   We had a great afternoon/evening in Charlottetown including a fantastic dinner downtown.

We stayed about 1/2 hour north of Charlottetown, which is pretty close to the middle of the island. 2014 is the 150th anniversary of the Charlottetown Conference, which led to the creation of the Canadian Confederation, so there was a lot of celebrating going on. A huge stage was set up in the middle of town with entertainment every day and night. There were several musicals going on at the arts center celebrating Canada’s music and history over the years, and of course, Anne!

PEI is also known for its beautiful sand dunes – and they were huge.    All of the beaches that were close to us were in Prince Edward Island National Park , which means there was a daily entry fee.   The fee wasn’t outrageous, but enough to keep us from dropping in for a few hours. We did pay one day and were amazed at how warm the water was and how sandy and shallow the beaches are!  Especially compared to the coast Maine (rocky and cold)!   We biked along a path which was “right along the beach”. In reality, we were behind the dunes most of the time!

We spent several evenings biking parts of the Confederation Trail, which runs the entire length of the island. This is one of the few free things to do. It used to be a railroad, so it’s wide and flat. Since the trail is primarily inland, the views are mainly of farmland or trees. There is one section which is supposed to be very scenic, but it was an hour’s drive away from where we were so we didn’t get to that part. The trail has occasional spurs, one of which goes straight into Charlottetown. This was convenient because parking in town was almost impossible with our big truck. There’s metered and garage parking, where we don’t fit, and outside lots which were pricey and only for all day, not by the hour. 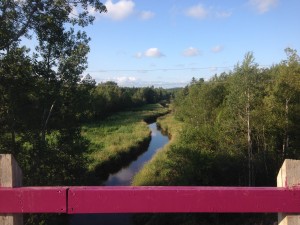 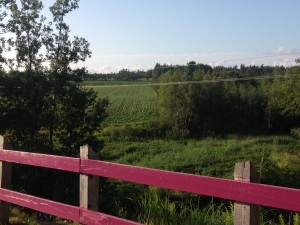 We rented a car for a day on the weekend and drove all the way to the northern tip of the island. From the cliffs you can see the convergence of two bodies of water: the Northumberland Strait and the Gulf of St. Lawrence. The waves actually crash into each other sideways off this shore – really cool to see.

There’s also a big wind farm as well as an interpretive center (with an entry fee), gift shop and restaurant. The soil is red because there’s a lot of iron in it, and by the end of our visit our truck mats were dusted with red dirt!

On our way north, we stopped at the “bottle houses”. A local resident built three houses completely from recycled bottles and concrete. Now his relatives run it as a tourist attraction. There are beautiful gardens surrounding the houses and we were lucky that during our visit a musical duo came and played some Celtic tunes on fiddle and guitar.

Our campground was nice, but there was a lot of turnover so we didn’t get to spend much time with any particular group of people. I’ve figured out that campgrounds are like apartment houses, except each “apartment” has a picnic table, fire pit and small plot of grass. People enjoy spending most of their time outside in these areas, so as you drive or walk down the roads, you’ll see just about anything: people lounging, eating, fighting, shaving their legs outside…yup, really. You hear who fights a lot or watches soaps all afternoon, who has a dog or plays an instrument. For the most part everyone’s on vacation so they tend to be pretty cheerful. During the last week of this visit, one lady across the street, who was with a large family group, had a very loud, cackling laugh. And she laughed all day and all night. It must have been exhausting! It was for us 🙂

One of the main tourist areas is Cavendish, where all the “Anne” things are. You can tour the house that was the inspiration for the book, see where the author is buried, and go on a horse and carriage ride with period actors. There are lots of motels, cabins and campgrounds in this area as well as gift shops, mini-golf, a wax museum, fast food, permanent fairground, etc.  Think Weirs Beach with a theme..

One evening we paddled out to an island where there were some impressive dunes. As we left the beach, a young girl called out, “Watch out for the current…it’s going that way.” We thanked her, and headed off into the “current”.  It wasn’t difficult to paddle so we were confused about the girl’s warning.  After exploring the beautiful dunes and seeing another bald eagle, we headed back to the mainland, which was about 1/2 mile away. Halfway across, the water got shallower and shallower, until we were grounded. We had to get out and walk for a bit to get back into water deep enough for the kayaks. The girl hadn’t meant to warn us about the “current”, but the TIDE! (You warned me, brother Rich) Meanwhile, a short distance away, a motorboat was taking someone tubing. Obviously it helps to have the inside information on the ocean floor contour and the tides!

On our last day there we went to a parade in Charlottetown which celebrates the annual Gold Cup sulky race. It was fun despite the pouring rain.  We even got to see the Royal Canadian (un)Mounted Police

In my opinion the best way to “do” PEI would be to move around every few days. The island is bigger than we thought and each section has its own flavor and things to see.  But no matter how you do it, bring your wallet..

Now we’re off to Vermont for weeks, gradually heading west to see more family in NY and Michigan.