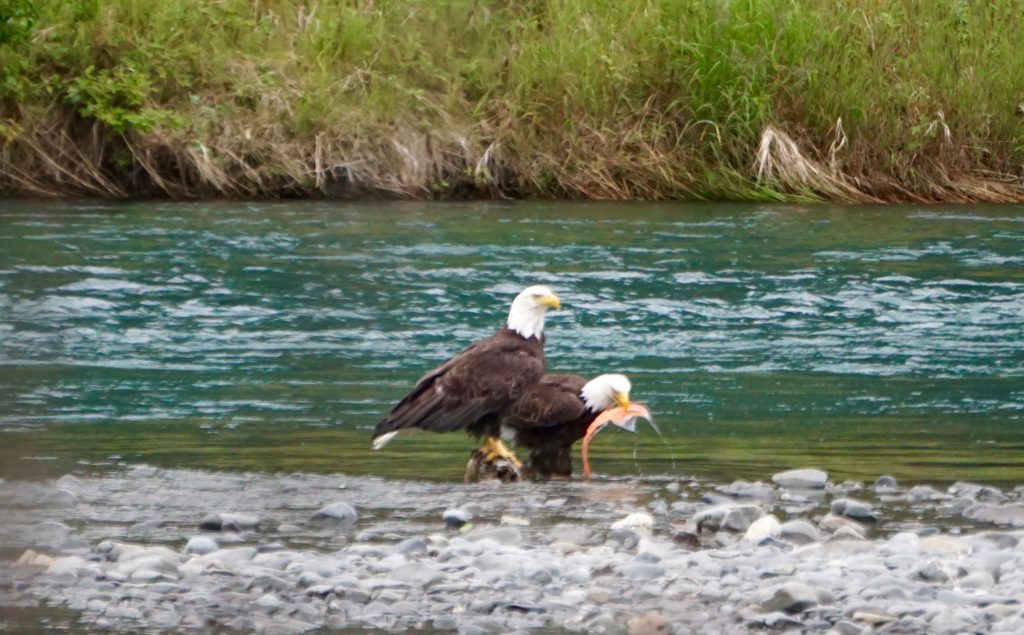 Cooper Landing was our next stop.  Kenai Lake (beautiful green water) flowing into the Kenai River, is another popular area when the salmon are running.  It is also a common place to see bears and other wildlife. 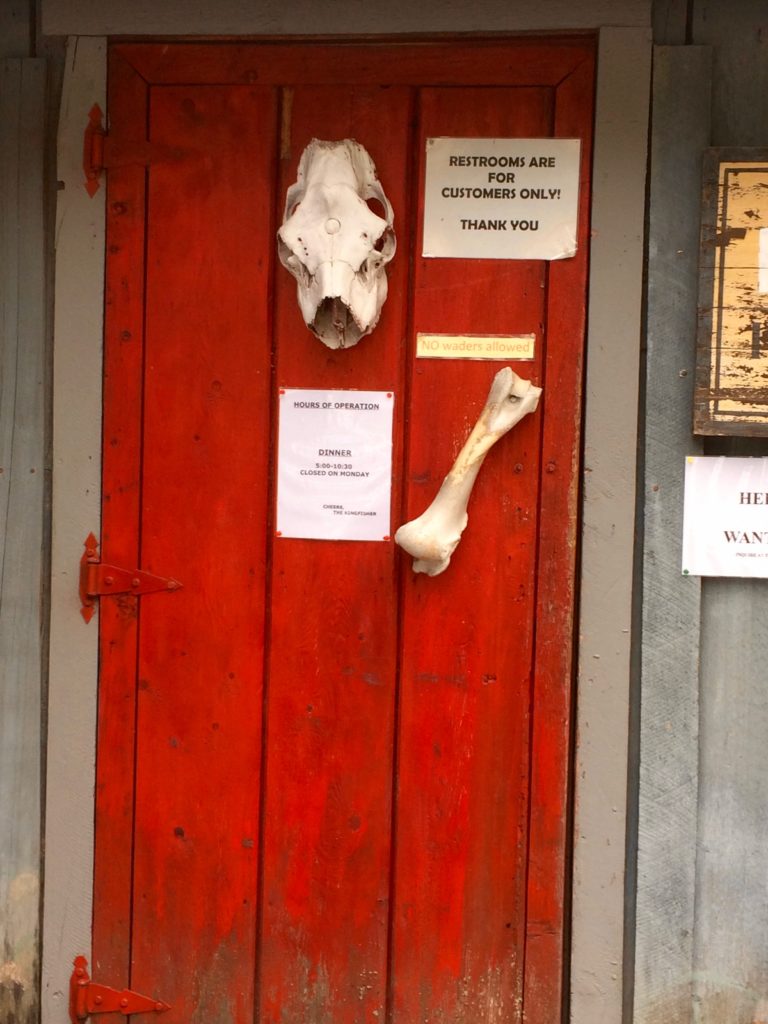 Dinner out one night was an experience.  Service was slow, and a field mouse scurried around the outside deck, but it overlooked the lake and had live music by Junosmile – they are from Orlando but spend their summers in Alaska playing at the various roadhouses..

Kenai Lake is almost as big as Lake Winnipesaukee but much colder, so we opted to kayak in the smaller Hidden Lake not far away.  It is 8 miles long and we covered well over half of it.  For much of the time, we were the only ones on the lake.  We finally passed a family out camping on an island and we could see 2 fishing boats on the far side as we worked our way back.  All we could think about was how different this was than the boat traffic in NH! 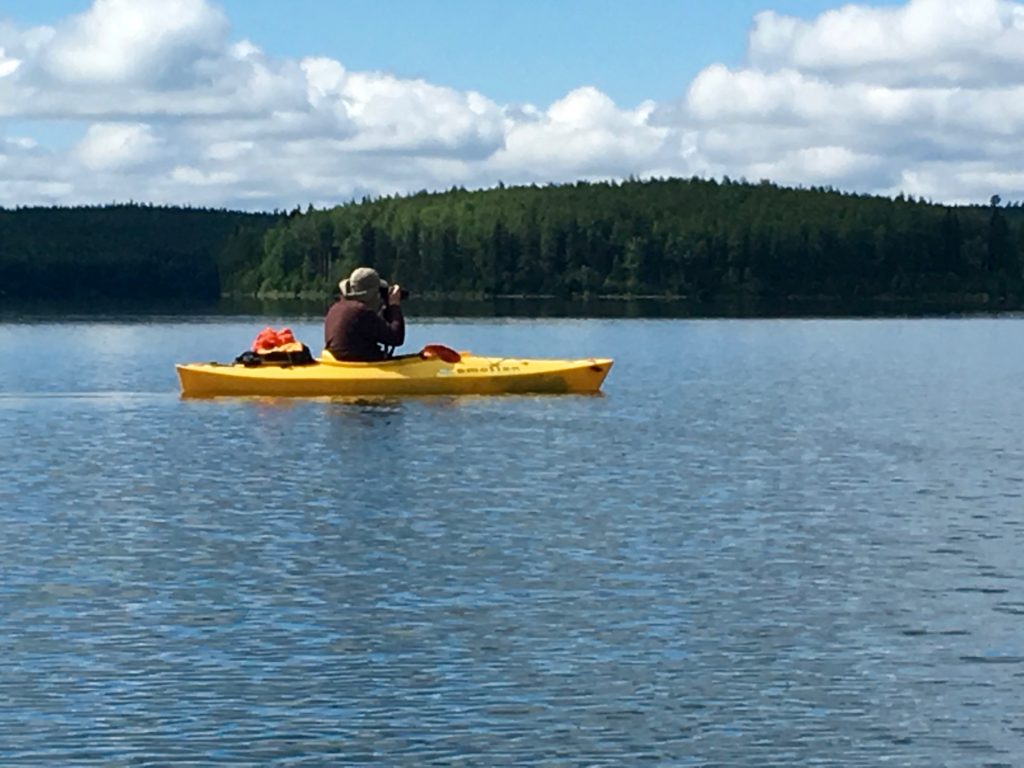 Jeff sneezed at one point and the echo was amazing.  We spent 15-20 minutes yelling, banging on the kayaks and anything else we could think of playing with the echo from the amphitheater-shaped mountains on the shoreline. The sounds were almost louder when echoed back! 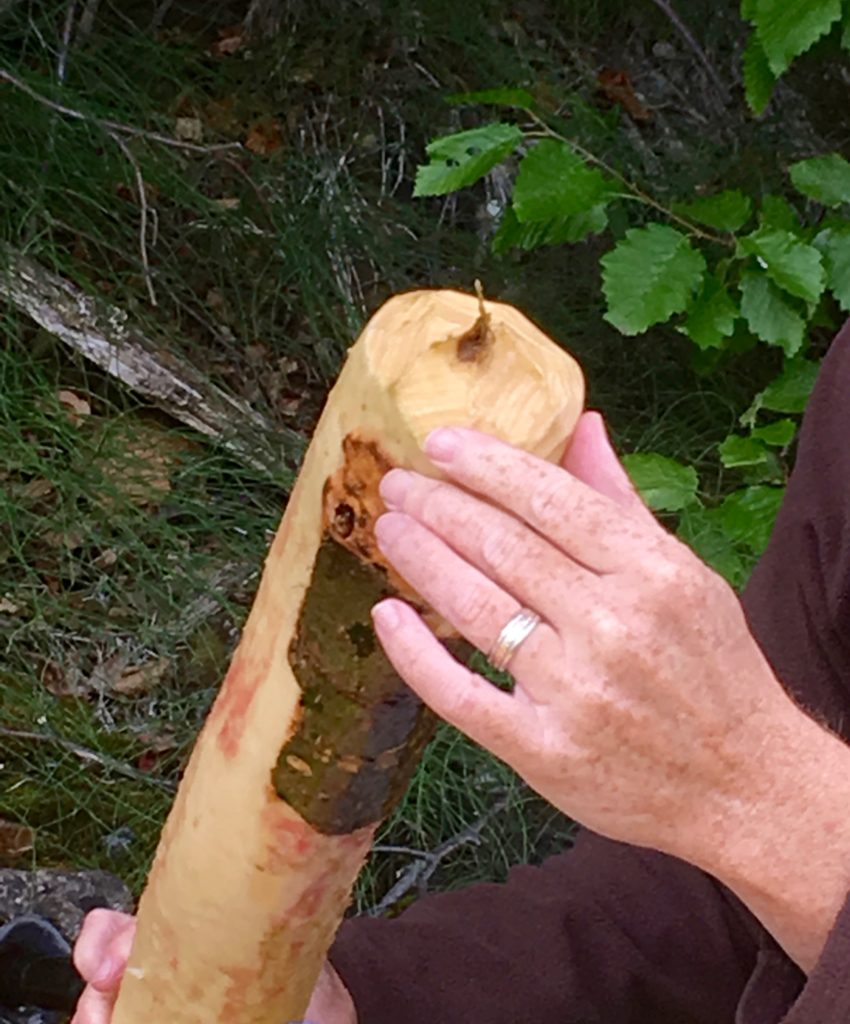 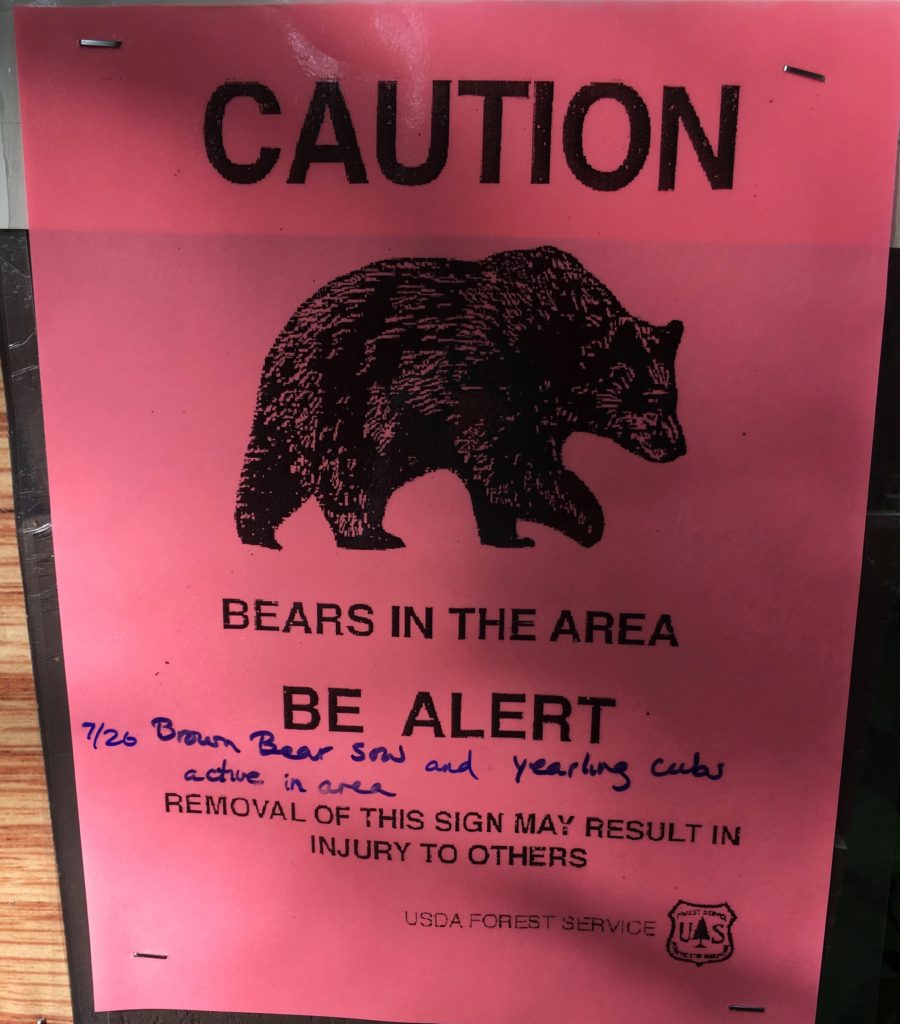 We also hiked “Bear Mountain” – the name was a bit ominous so once again we sang and made noise.  The problem with noise is that it scares everything away.  Hmmm  – do we want to see wildlife or not?

About all we saw were some Ptarmigans.    This dirt road is well known for the wildlife viewing – but even after 15 miles each way, we didn’t see much! You really have to be at the right place at the right time. Often we’ve seen bears or moose and 30 seconds later they’ve blended back into the woods and the folks behind us wonder what we’ve stopped for. 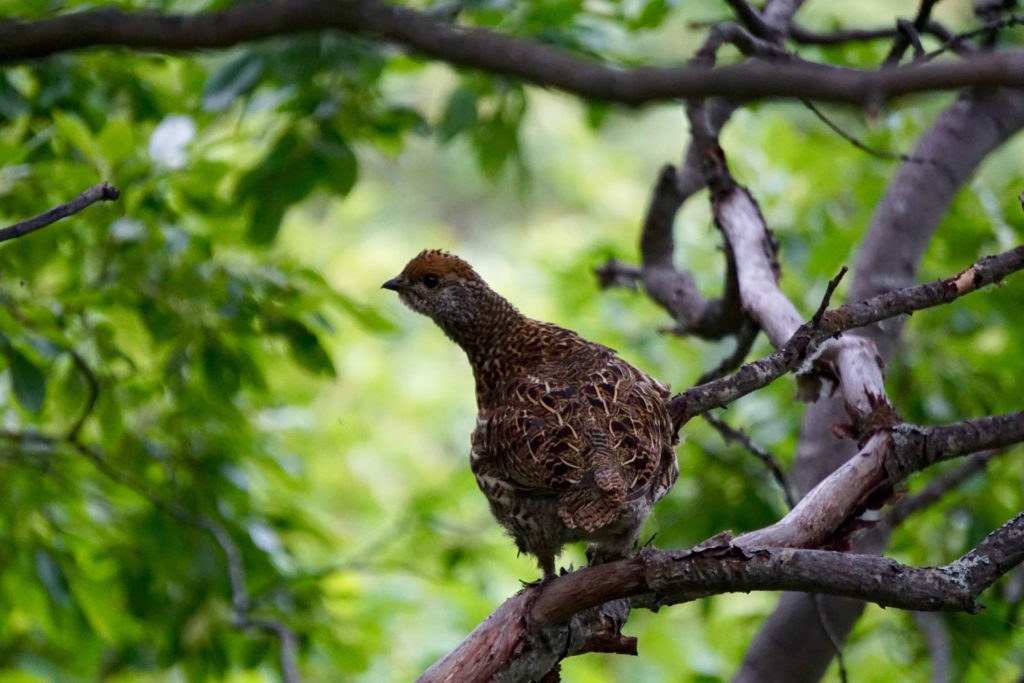 After the hike we stopped down at the river and saw a bunch of bald eagles.   Probably the best eagle viewing of the trip.   Another day we hiked along the river to the canyon section.  Again, beautiful scenery but we scared all the wildlife away.   Nice picnic lunch on the shore, watching the salmon jump. 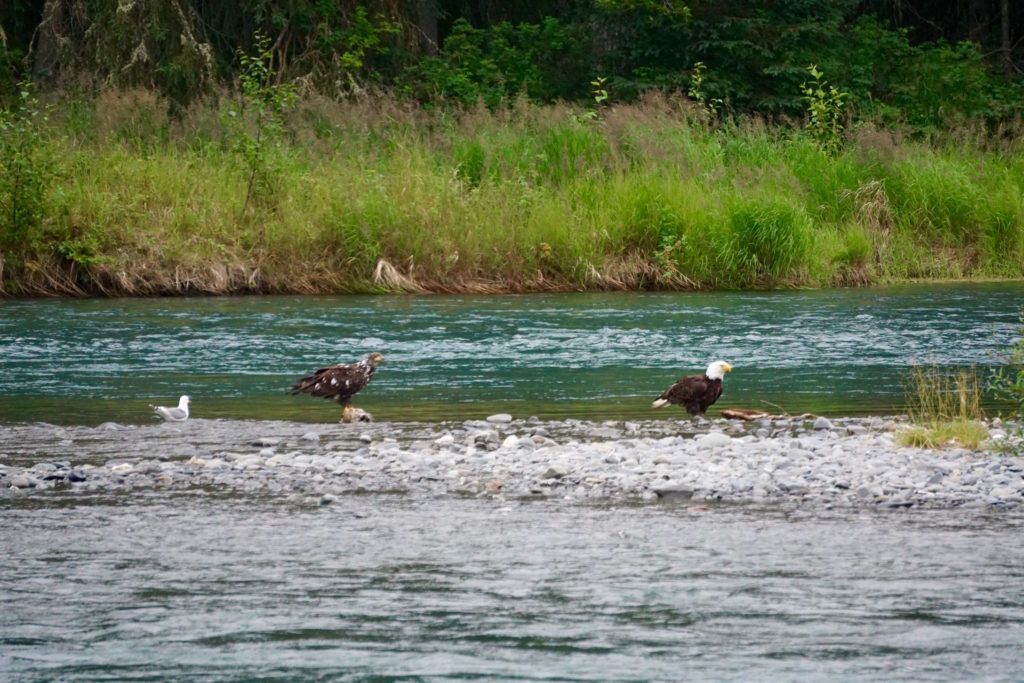 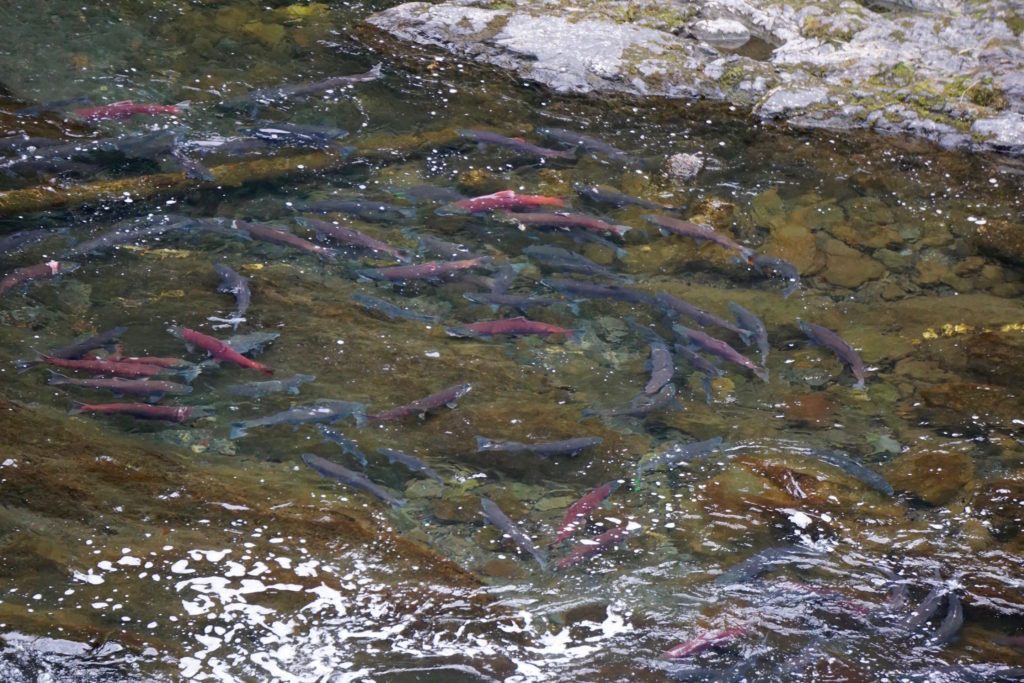 As you looked down, you could see hundreds of salmon in the pools of water.  When the bears are around it apparently is like shooting fish in a barrel!  But alas, still no bears!   It was amazing to see the salmon jumping up through the falls.  If they don’t make the jump right, they get slammed against the rocks.   What animals do to procreate! 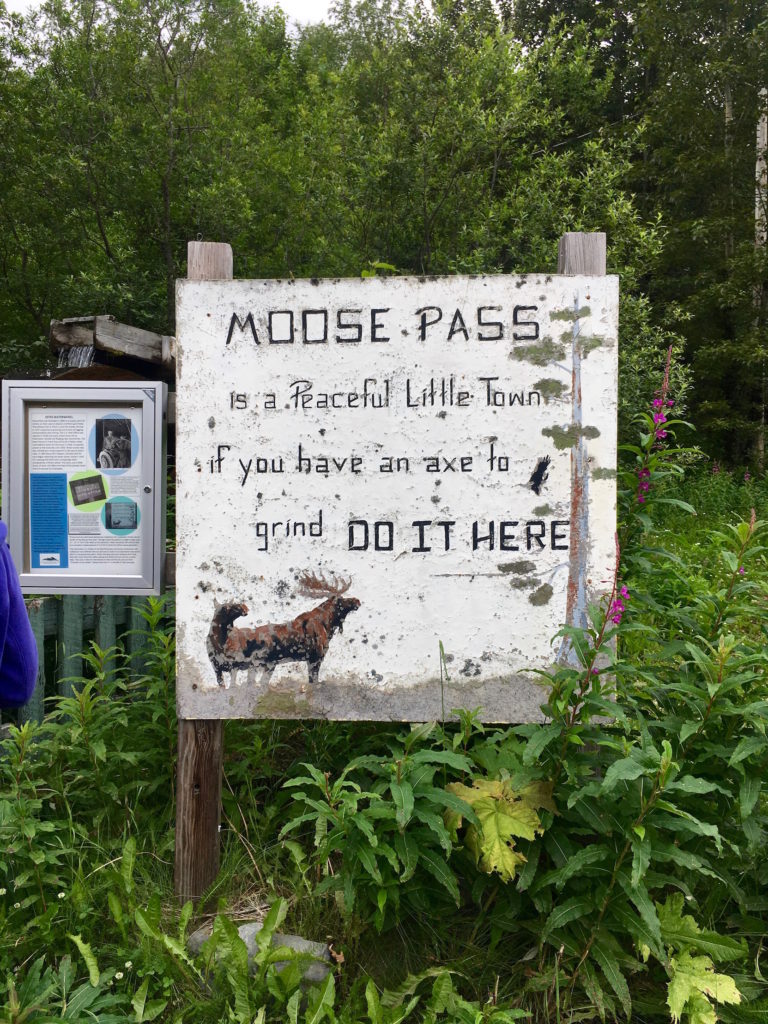 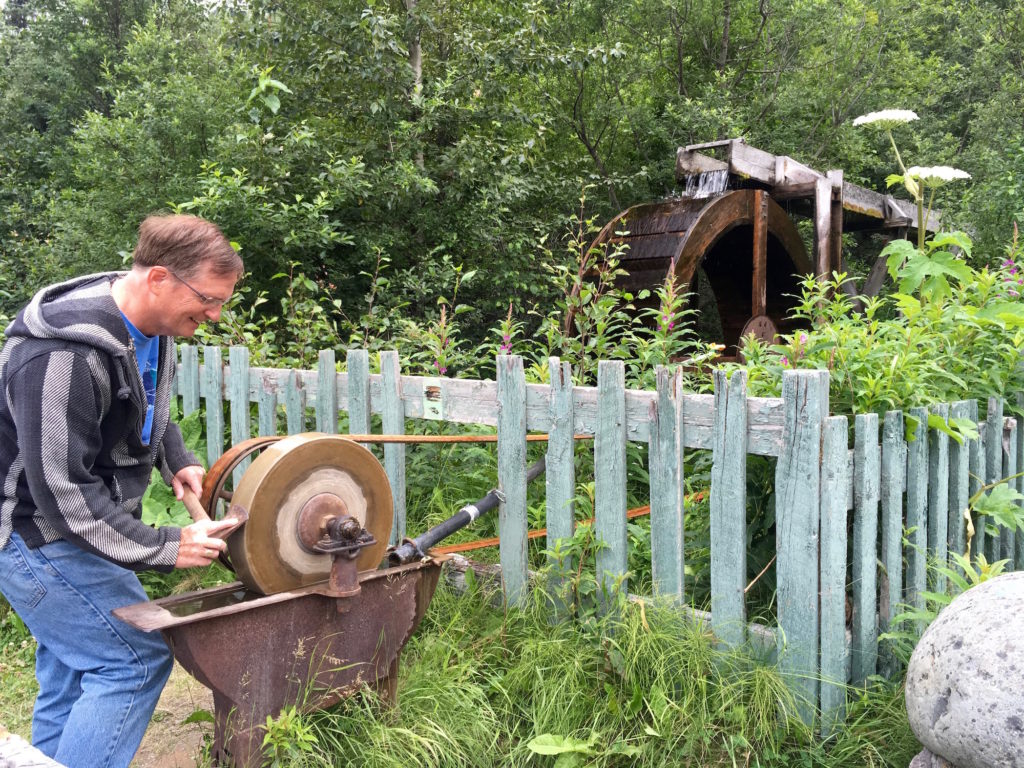 Our last stop was Seward.  On the way there we stopped at Moose Pass, where there is a working water wheel, Jeff had to try it out. 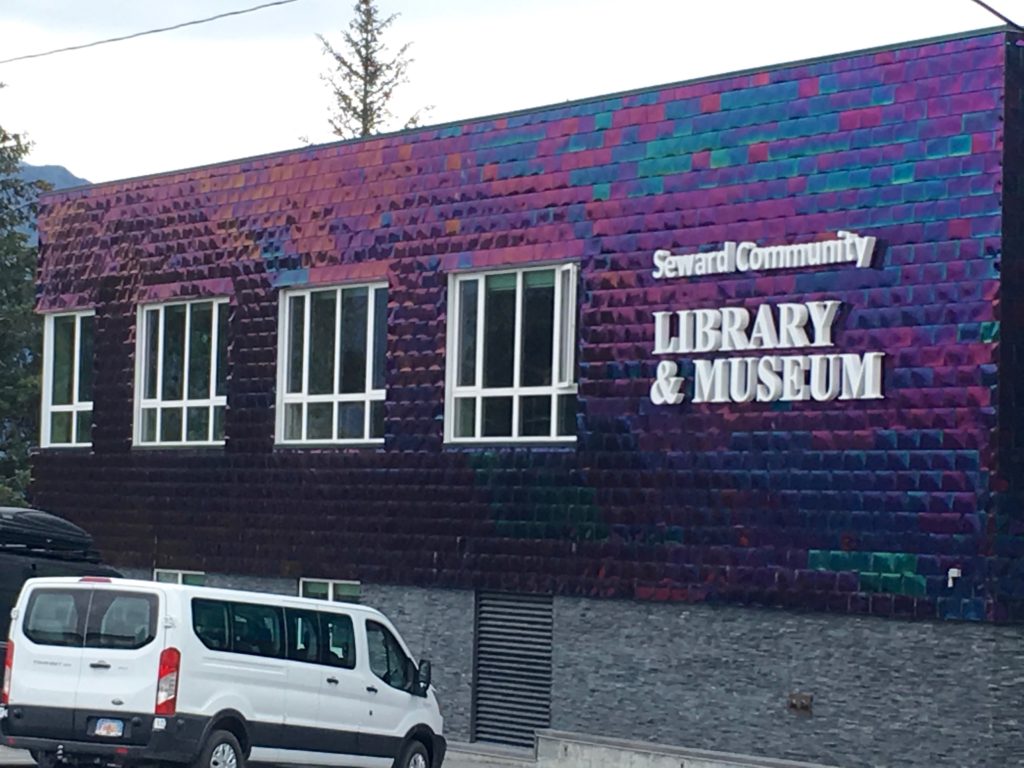 The Seward library is made out of metal shingles that change colors as you go by. It’s meant to simulate the northern lights — so cool!  Seward was another town that was heavily damaged by the earthquake and tsunami in 1964.  There’s still a railway car back in the woods that was washed off the tracks and up to the base of a mountain. But it has clearly recovered and is a vibrant town centered around…  tourism and fishing! 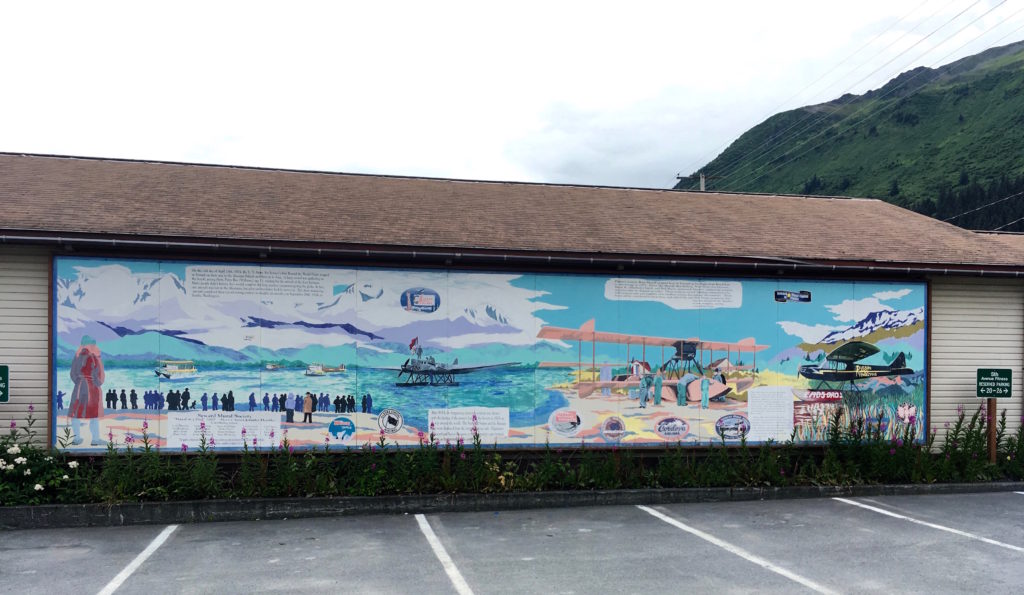 There are 12 murals in the town, for which it was officially designated “the mural capital of Alaska”.   The Seward Hotel had quite the lobby display. 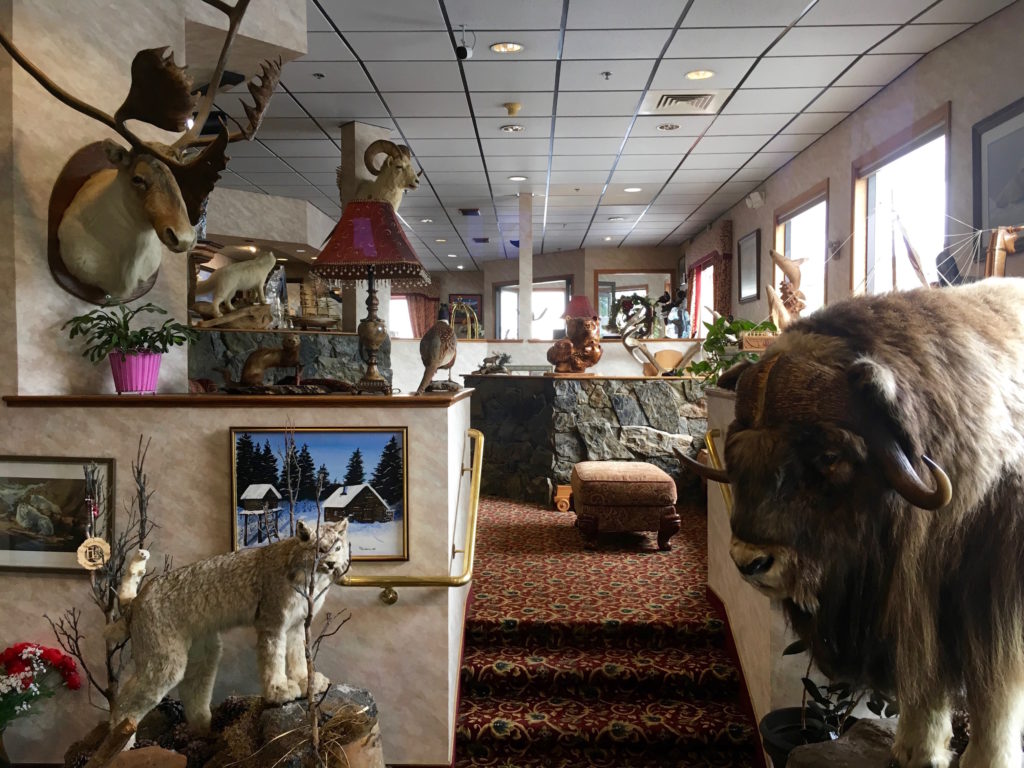 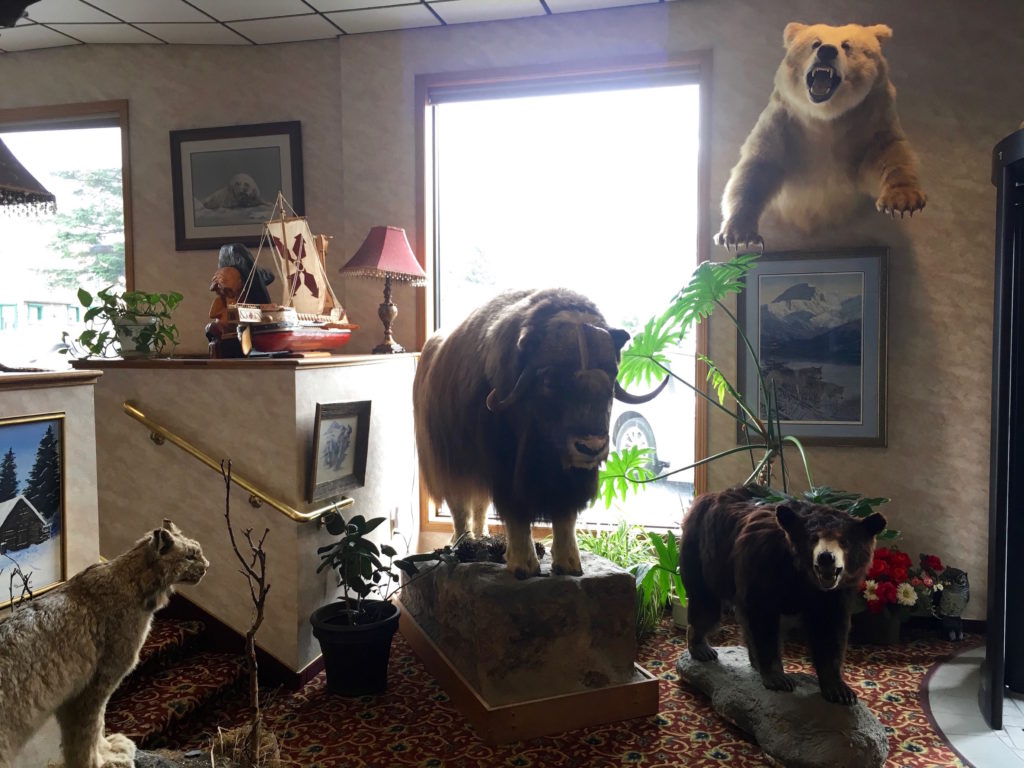 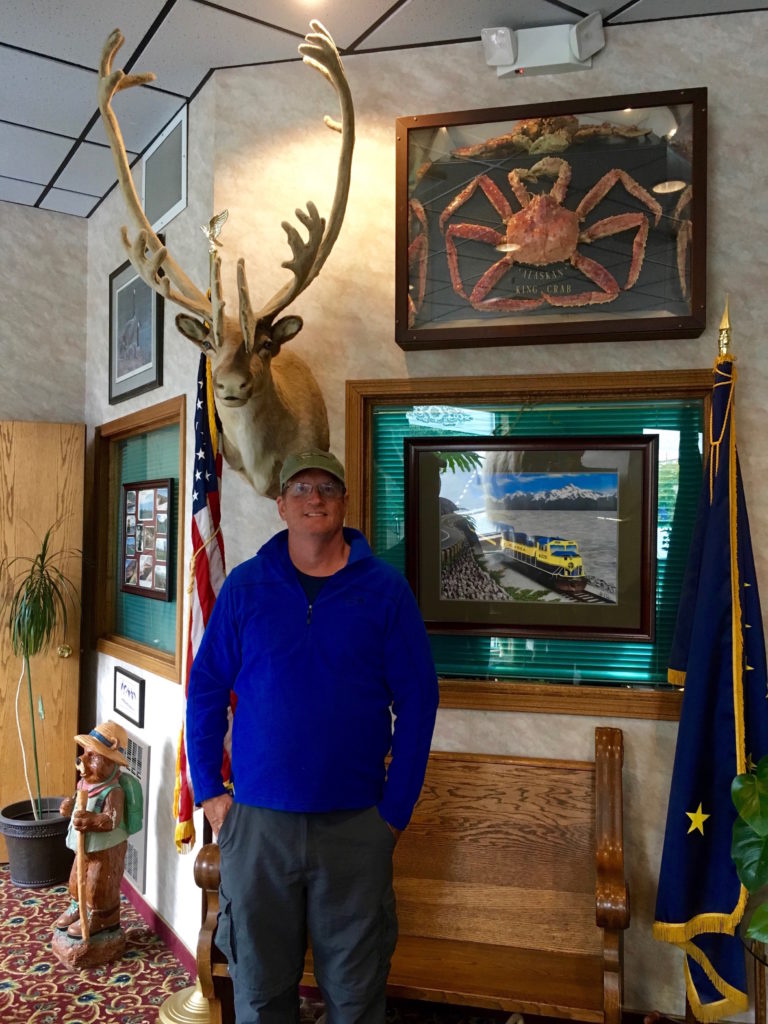 We decided to take an all day glacier tour with Major Marine to the Kenai Fjords National Park.   It was a gorgeous day after what the locals said had been a very wet, cold summer. We’ll let the pictures do the talking here. 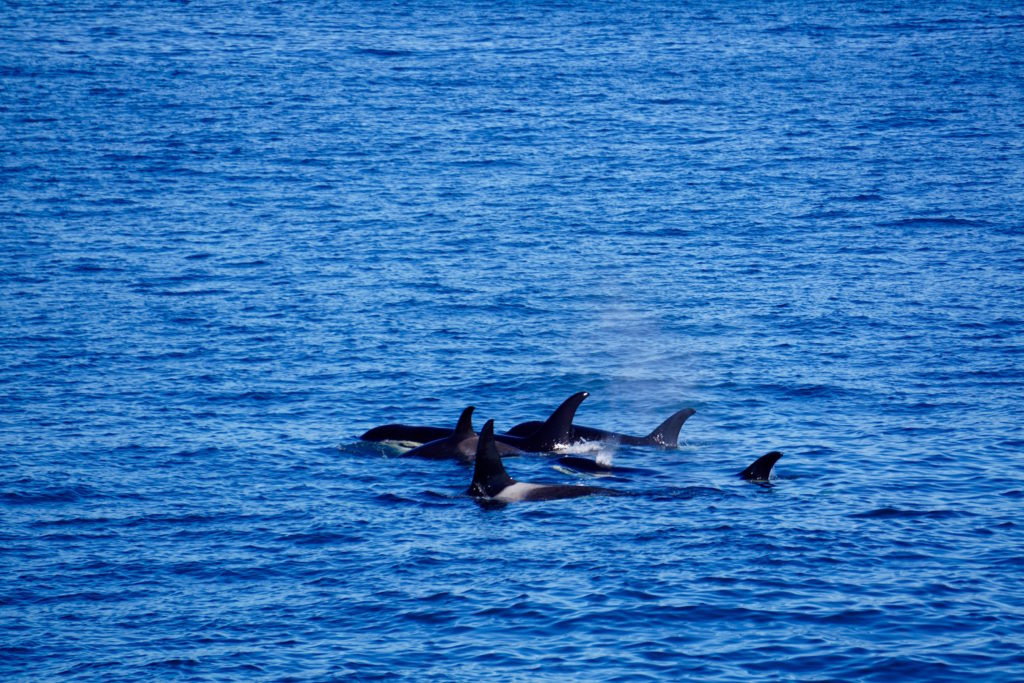 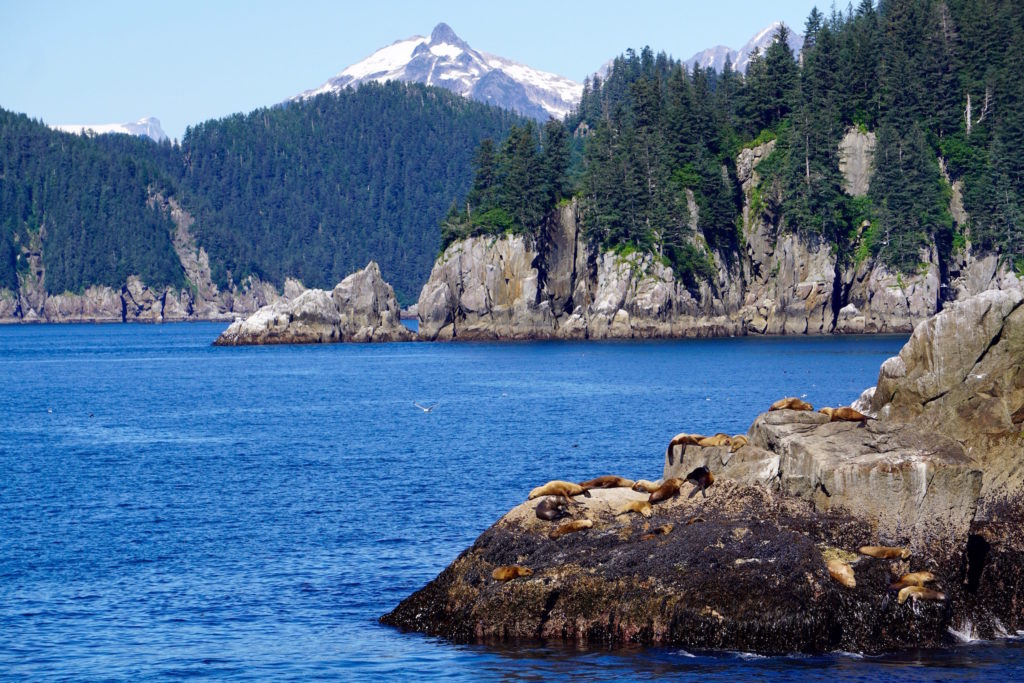 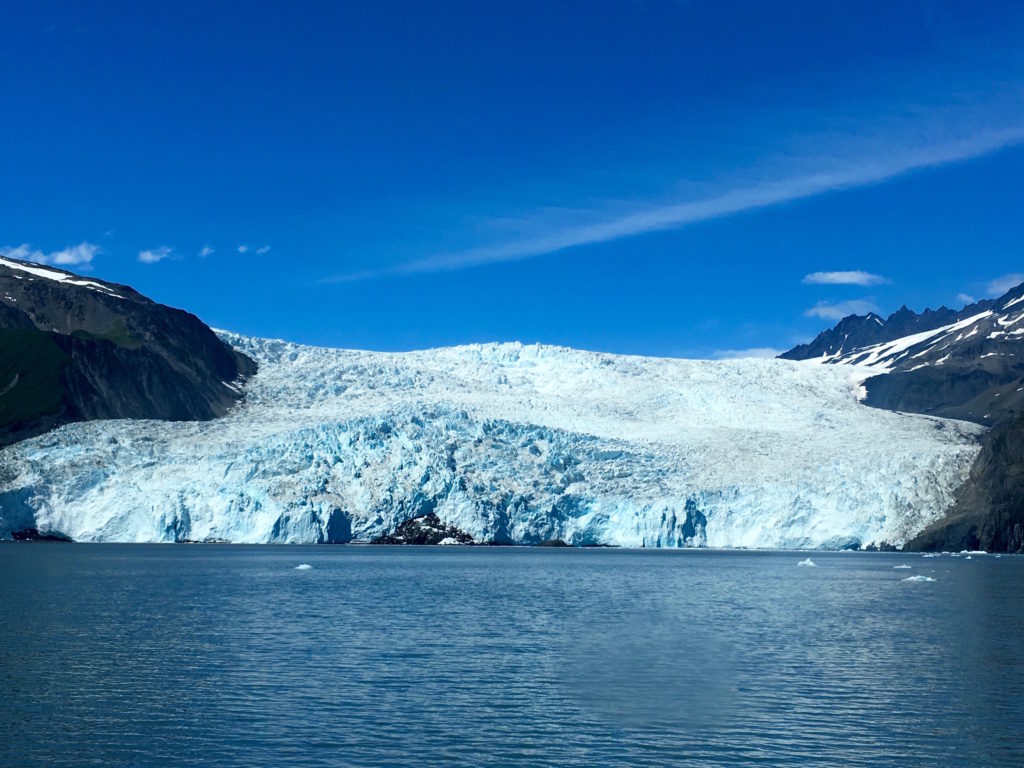 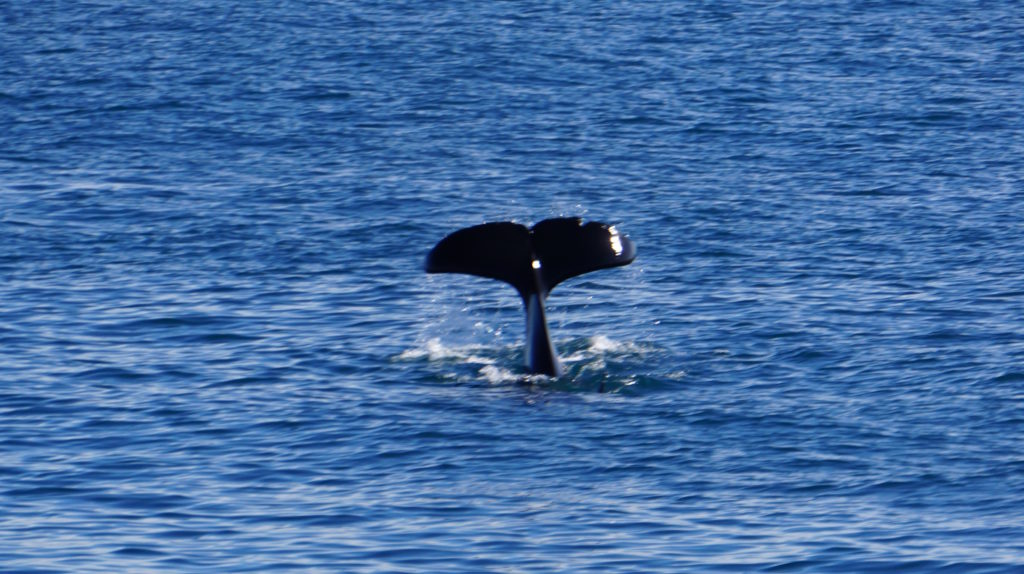 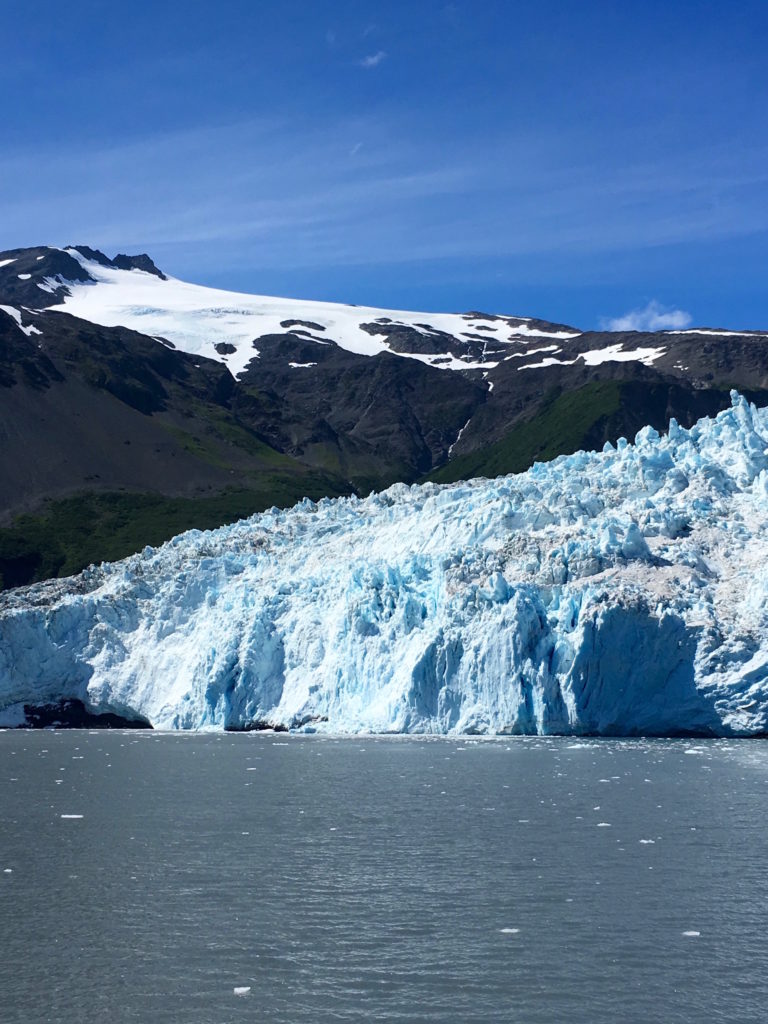 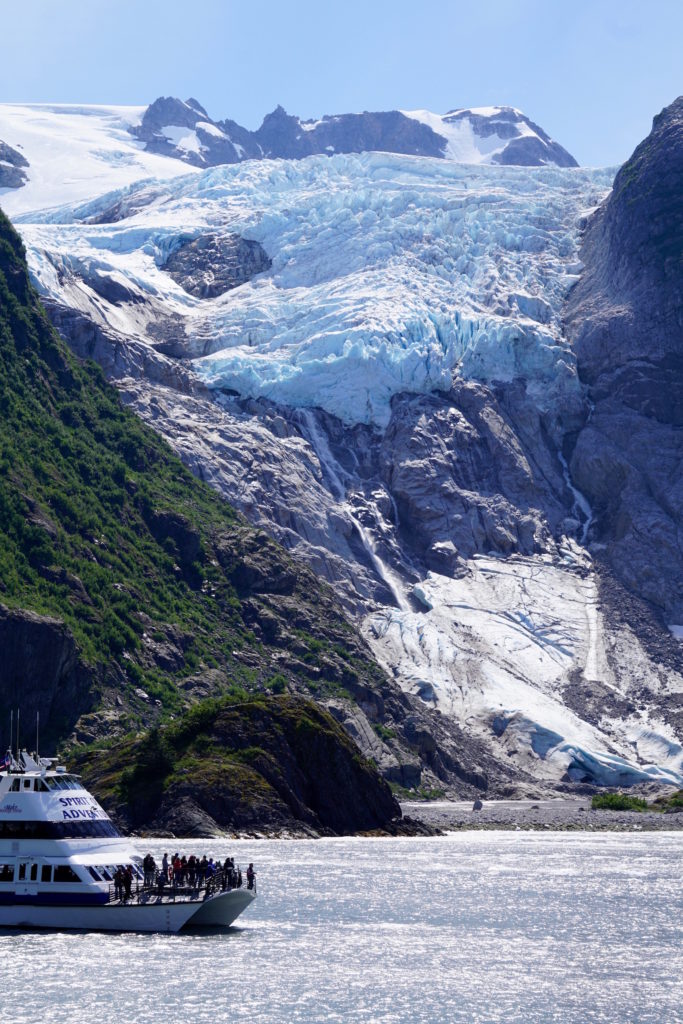 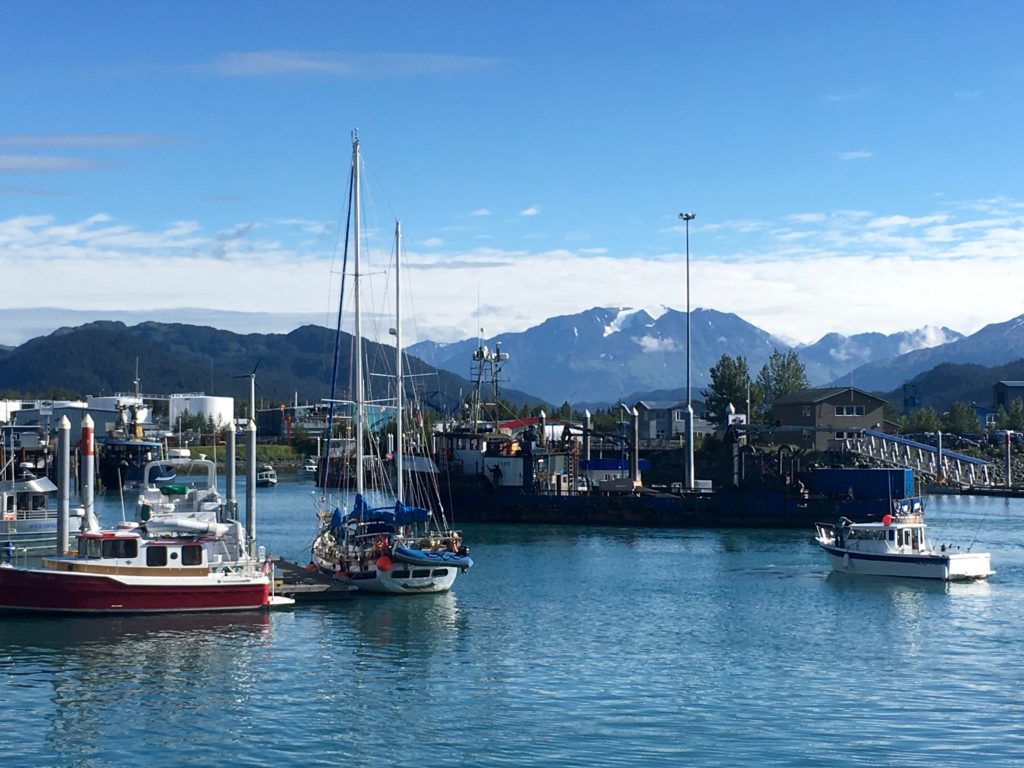 Another day we hiked up to “Exit Glacier”.  This wasn’t overly exciting, and we had one of our worst bug encounters.  It was neat because as you hike the trail they have signs indicating where the glacier was over the last 100 years or so.  It is quickly receding! 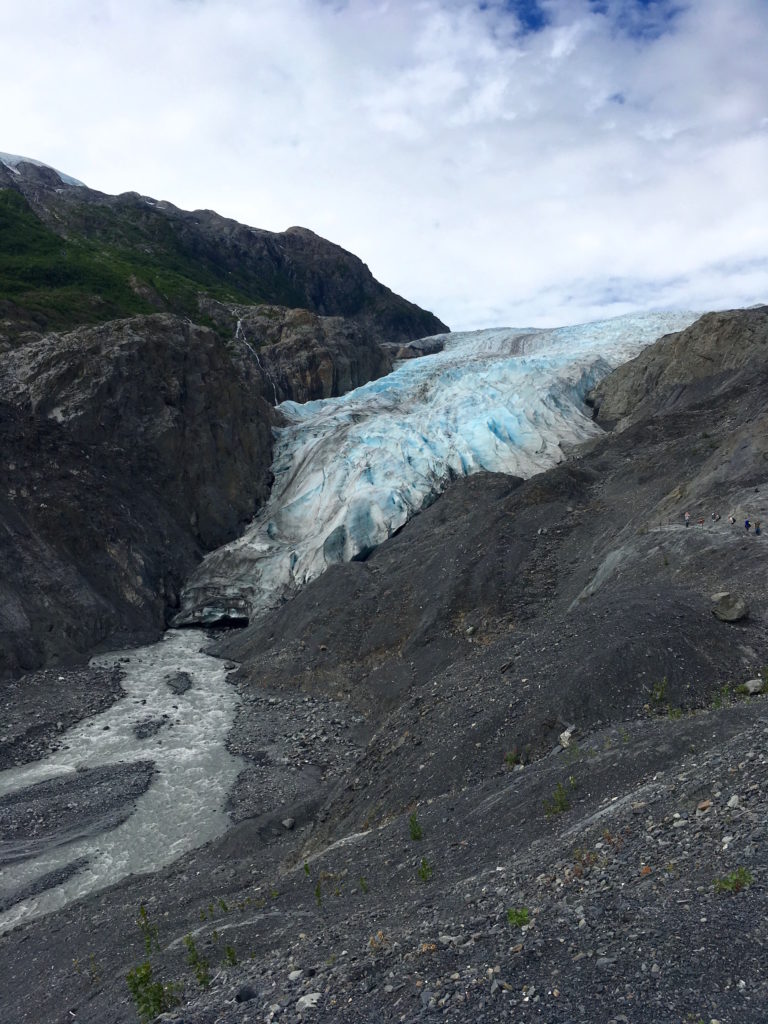 A final night on the shore of Resurrection Bay and we start our trip back.   It was a weird feeling like the trip was over, but it was far from over!