After moving 6 times in 7 weeks, we needed to take a breath and stay somewhere for a month. After finding out my brother, Richard, and his wife, Lynn, would be visiting their son in Irvine, we chose SoCal as a destination. The RV Park prices all over San Diego and Orange counties were crazy, so we ended up at a place right on Lake Elsinore. It was…..interesting. This area is about an hour east of Irvine, and 1/2 hour north of Temecula. It’s the largest natural lake in southern California, but, like everything else in the west, was seriously low due to the drought.

I had called the “Lake Park RV Resort and Motel” to make a reservation, and was told, “Oh, you don’t need a reservation; we have plenty of room!” Then, a few days before we arrived I called again and asked if they would accept deliveries for us. The friendly person on the phone said, “Sure, no problem. Are you on our list?” “Nnnnooo”, I replied, “you said I didn’t need a reservation but I’d be happy to make one.” “Oh, no, she said, I’ll put you on our ‘pending’ list.” When we arrived, there was a different lady at the front desk from the one I had spoken to twice. When we told her we wanted to stay for a month, she said, “Oh, I don’t think I have any room at all.” I explained that I was told I didn’t need a reservation because there was “plenty of room”. She said, “We don’t take reservations — it’s first come first served.” Well if I’d known THAT we would have gone somewhere else!  I also told her that if we couldn’t stay I’d have to come back every day to get my Amazon deliveries! I mentioned the other person had put us on a pending list. She looked in the book and we were not on it. And suddenly  her whole expression changed and she looked at me like I was making it all up.

So “Judy” hemmed and hawed, crossing sites off her map one by one, repeating over and over that she definitely doesn’t have a space for a month, and then told us to go out and see what was there. Really?!?  That was a first. So, we walked around the little park of mostly full-time residents and found one spot. After returning to the office, she said, “Well, that was supposed to be for this other guy, but I’ll give it to you.” Wait, why can she hold it for someone else but not for us? Then she asked us how long we wanted to stay. We said, well we were hoping to stay a month but we’ll take a week or two. “Oh, you can stay a month!” she said. HUH? We were now so confused we were wondering if we should  stay there.  After getting all paid up she gave us a loaner cable box to use until we could go get one at the cable company.

We were right on the beach, which was fun for walking and frizbee, but since the water was so low, a large area was exposed that used to be underwater, and it was littered with all kinds of scary junk like broken beer bottles, garbage and parts of things that used to be on boats. We were right next to one of the town boat launches. The water was a yucky green color and I never once saw anyone kayaking on it. People did fish and zoom around in motorboats, and on weekends there was a stand-on-top water-powered jet board concession.  Apparently, you are never allowed to swim from a public beach in Lake Elsinore – just wade waist deep.

The town itself was a mixture of strip malls and big box stores with neighborhoods on both sides of the metaphorical tracks. Like everywhere in the west, there were homeless people. There was a large hispanic population. There were miles of tract houses on the hillsides for, I assume, commuters. Clearly, the town’s boom time was in the summer, and there was an “old town” section with several antique shops. It all looked pretty run down.

Our first full day there we went to breakfast at a lively diner. They had silly hats for people who were there for the first time (we stayed under that radar) and halfway through our meal, the lights went out and all the waitresses did a line dance for us. The food was good, too!

The next weekend we visited with my family and spent the day at Laguna Beach: a fun and pretty town. 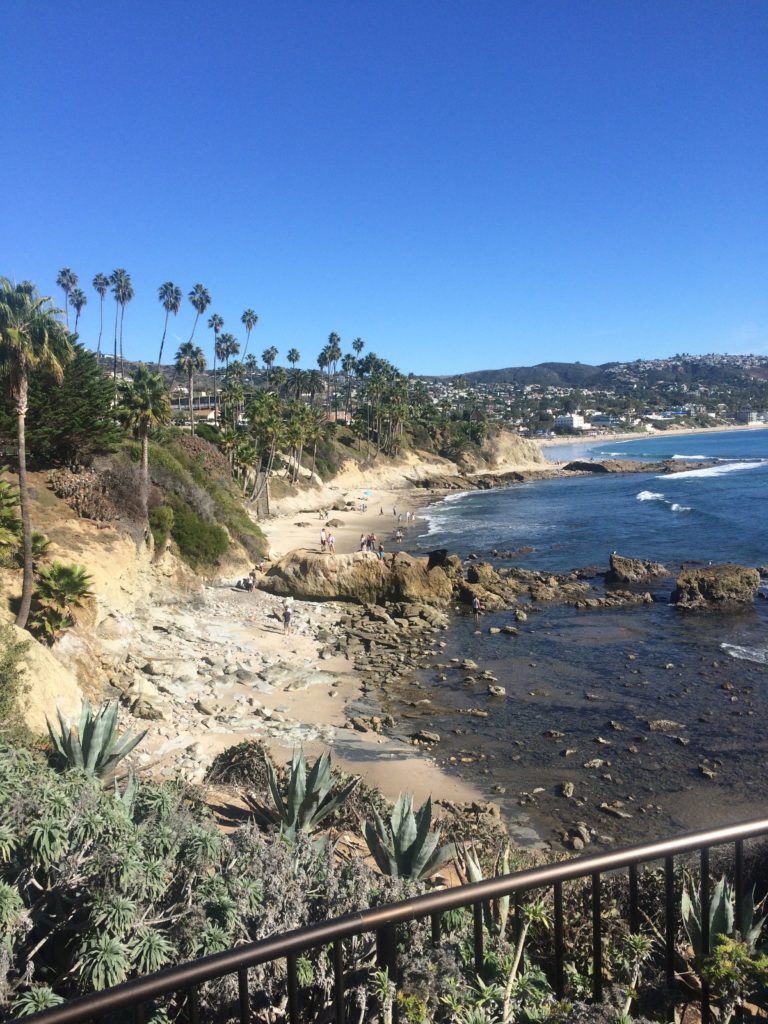 We met Jemma’s parents (Paul’s fiance) and later in the month got to share Thanksgiving with them at their house!   Thanks for a great evening! 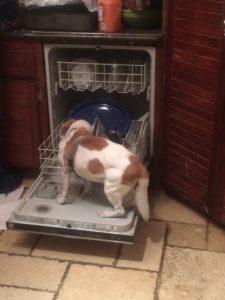 One weekend we went wine tasting in Temecula. This area has a really nice “old town” in the middle, surrounded by sprawl, surrounded by wineries. We tasted some yummy wines and it was a gorgeous afternoon. 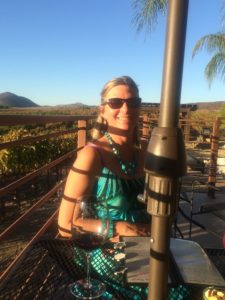 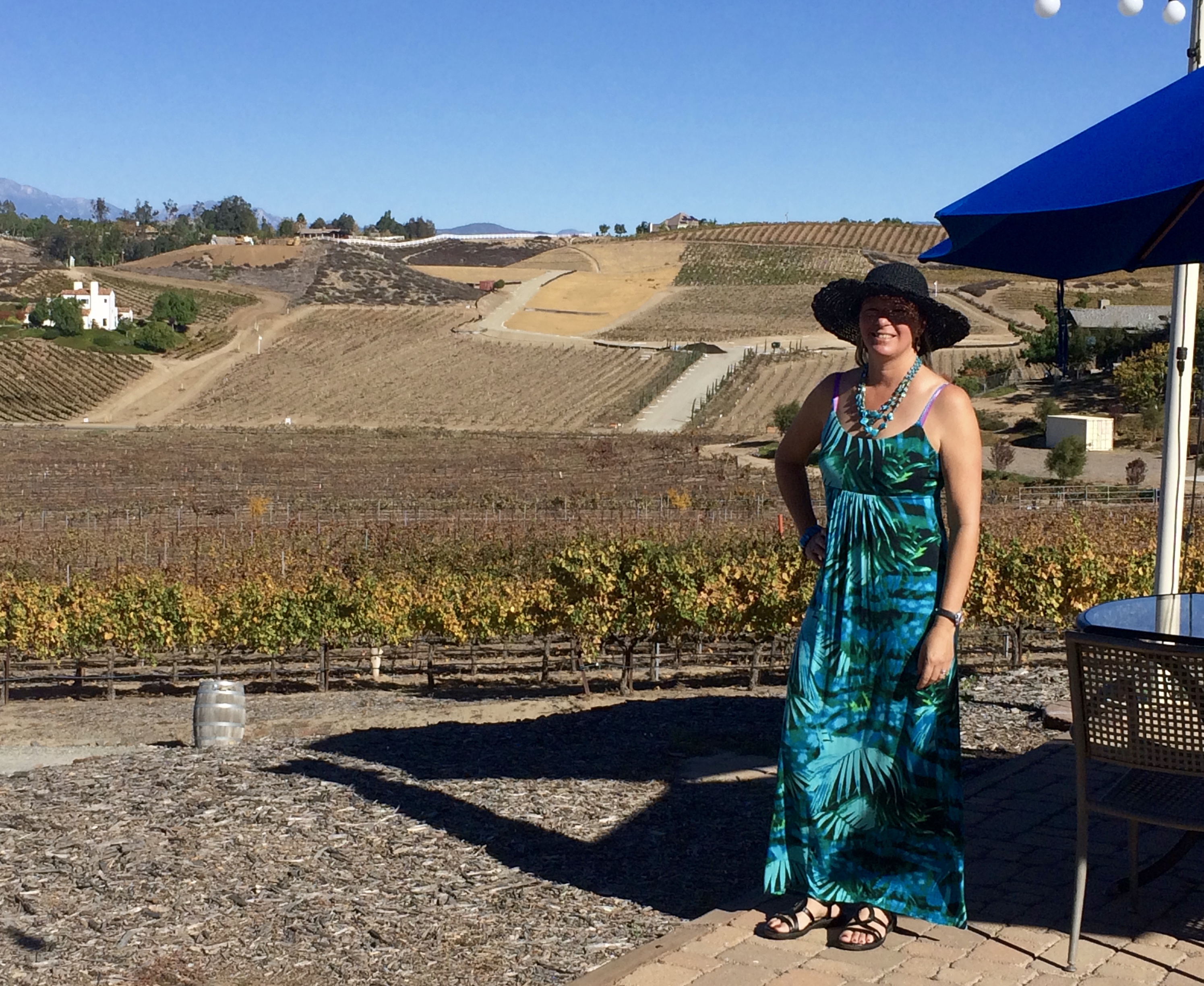 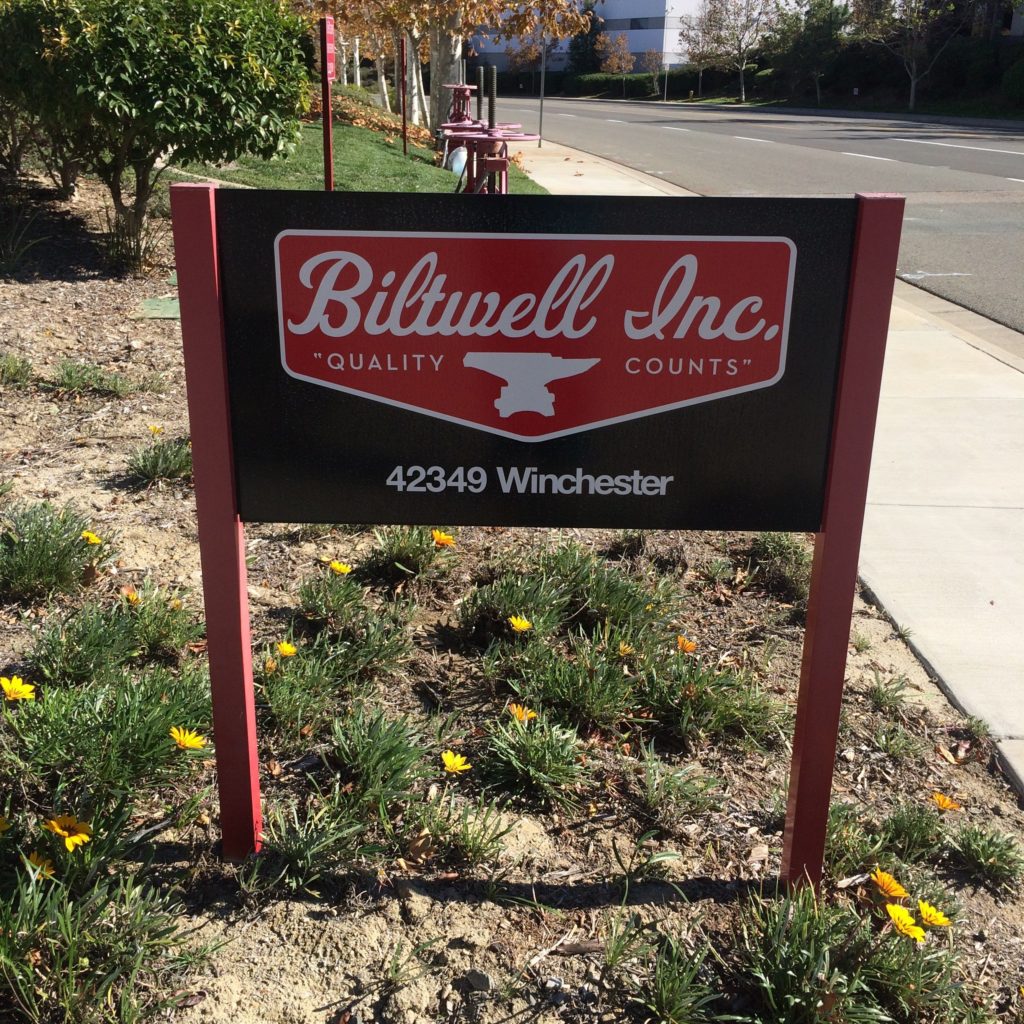 Jeff took a weekday off so we could see the San Diego Zoo. I generally don’t like seeing animals in cages, but this zoo’s enclosures are so well done you don’t feel bad for the animals. 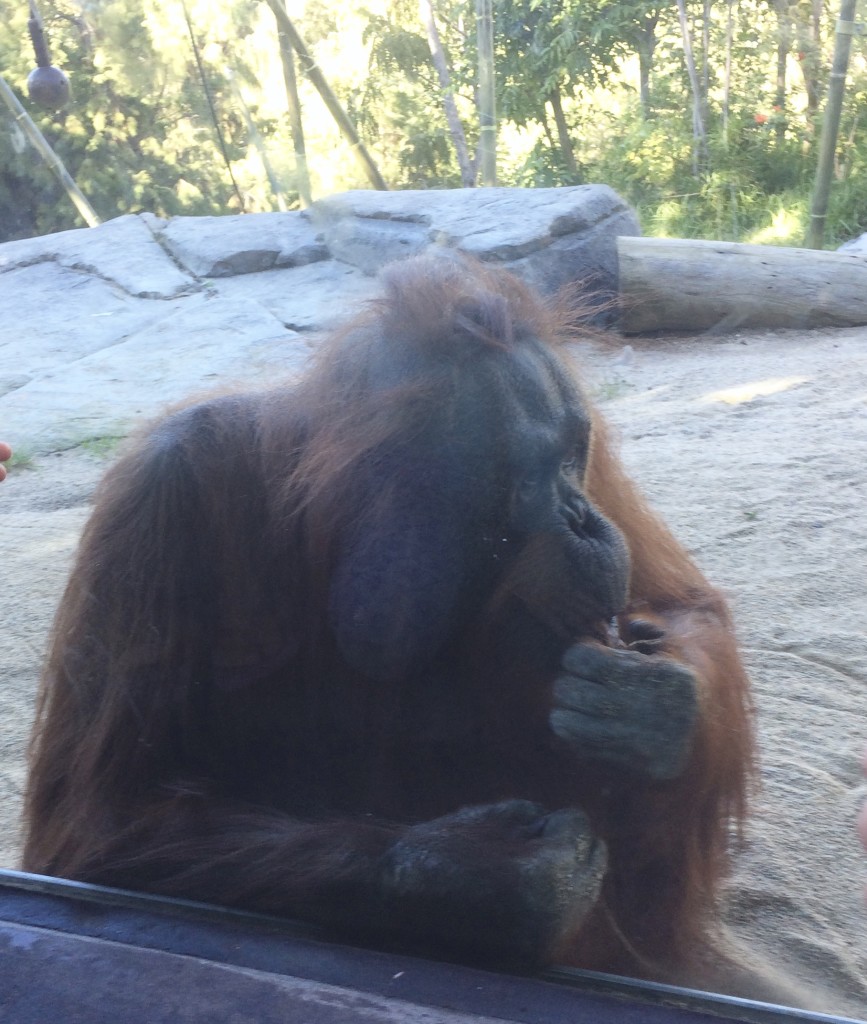 As we have said, Facebook has been a great way for us to locate old friends and Jeff’s high school girlfriend was not far away.   She came over to Elsinore for a great afternoon of sun, margaritas, and stories old and new.   Antics from high school entertained Sue and we talked about all of our families and other common friends.   Not really enough time, but it amazes us how easy and comfortable it is to catch up with people we have not seen for over 30 years!

After Thanksgiving we headed west on Route 8 across California into Arizona. On our drive, Judy called and said we must have forgotten to return the cable box. Jeff explained that we had returned it 2 days after we arrived when we went and got our own. She laughed, and said the ‘other’ front desk person must have forgotten to write that down – just like she forgot to tell us you can’t have a reservation and forgot to put us on the ‘pending’ list.

The changes in the landscape were amazing. We drove through the Descanso section of the Cleveland National Forest, climbing up and over the mountains – always exciting with an 8-ton trailer. After a huge, dry valley, we entered an extremely rocky area. The geology of southern California is pretty complicated with tectonic activity, advancing and receding oceans, etc. so I’m not sure where all those rocks came from.  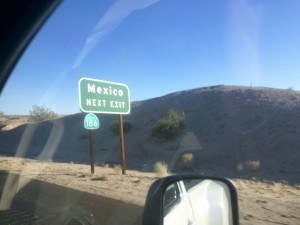 We got pretty close to the border with Mexico, and saw “the wall”.  It goes on for miles and miles. We crossed a border checkpoint going into Arizona, and saw all kinds of border patrol activity, including ATV’s, helicopters and even a blimp!

After the rocks, we came up over a rise in the road and saw desert sand dunes for miles! The area is called the Imperial Sand Dunes and was/is a favorite location for filming movie desert scenes.  It was such a sudden switch in the landscape we gasped! There was a huge area of BLM land that was used for off-road vehicles. Being a weekend, there were concentrations of RV’s on the sand, and all kinds of dune buggies and ATV’s everywhere.

We spent 2 days in Yuma, AZ where we met up with a former co-worker of Jeff’s and his wife. Ed and Daphna fed us dinner on Saturday, then Ed took us on a fun hike on Sunday and we hosted them for dinner at our place.  Ed was a great friend during Jeff’s divorce but hadn’t really kept in touch for over 10 years, but again, we were talking like we had just seen each other last week.

When describing the drive to the trailhead for the hike, Ed said it was “kind of narrow” but we should be fine with a 4-wheel drive. It ended up being one of the most harrowing things we’ve ever done with the truck since, in many areas, the road was just wide enough with soft, rocky slopes down either side.  It may have even topped the scary list for Jeff above driving Monty up the dirt road to Jock’s house!  Jeff could not even see the road over the hood, so Ed and Sue got out and directed him right or left to keep from sliding down the hill into oblivion. We finally found a place to make a 20 point turn and go back to the flat desert, after Jeff got called a “Wuss” by an older lady for not trying to go up a seriously rocky, steep slope with the truck (she had left her jeep behind!).   Pictures here do not do the experience justice. 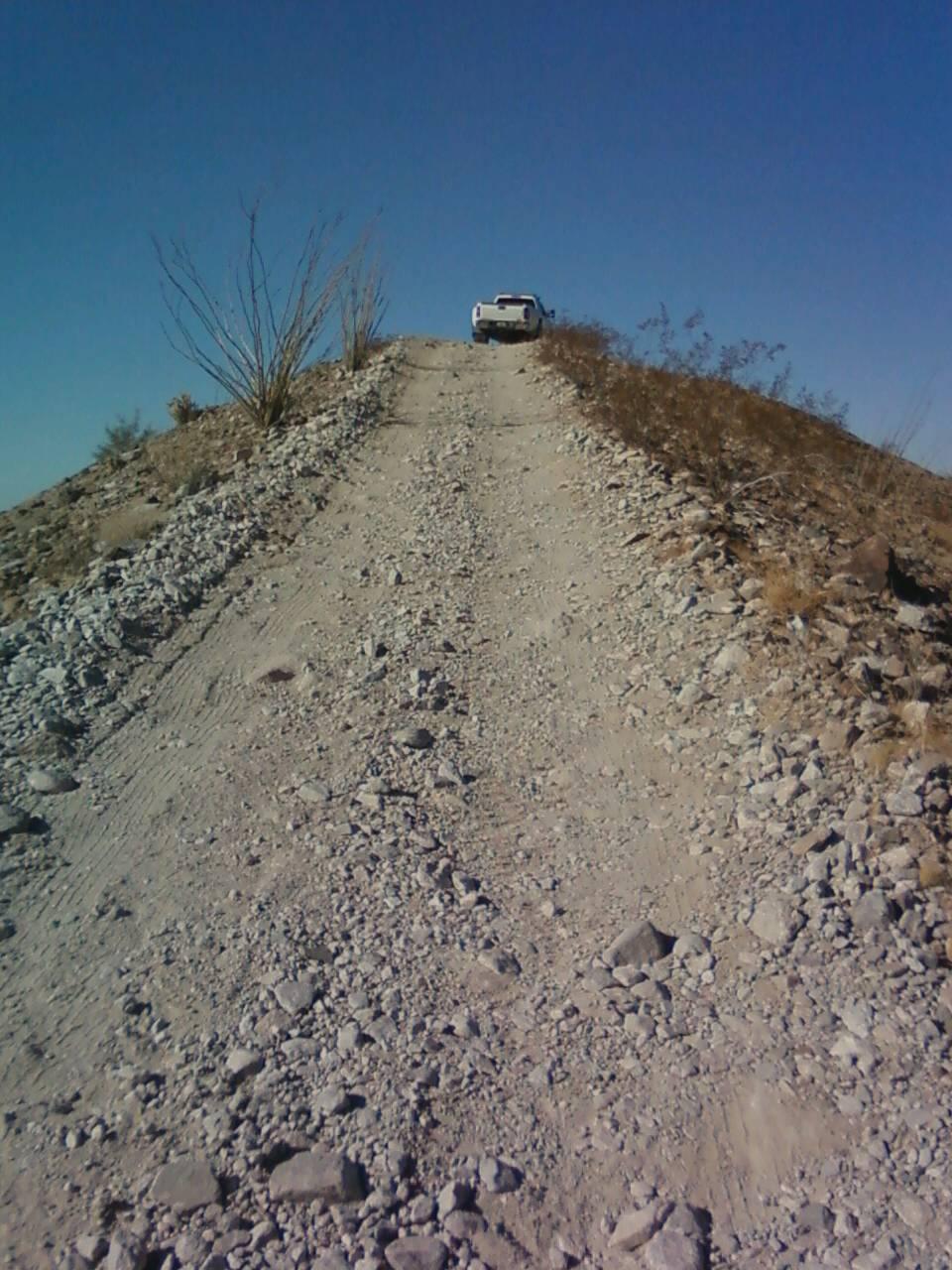 It was a fun hike, though, and good to catch up.

And now, off to Camp Verde, AZ for about 6 weeks to hopefully to some skiing/snowboarding in Flagstaff and check out Sedona.