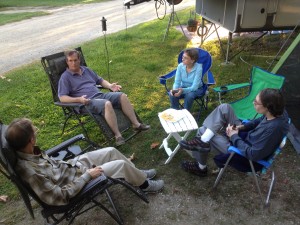 Ann Arbor delighted us with spectacular fall weather during our entire stay! Sunny days in the 70s and cool evenings in the 50s.  This allowed us to watch the fall colors appear right before our eyes. Again we had lots of fun, relaxed, quality time with relatives: my brother David, sister-in-law Karen and  nephew Ben.  Being near U of M during football season caused the campground to get a bit rowdy on weekends!

Ann Arbor is a fun city with the University of Michigan in the middle. The campus is gorgeous and there are lots of restaurants with outdoor tables full of students, making for a fun vibe. They have a bicycle-rental system you can sign up for with places to pick up/return strategically placed around the town. 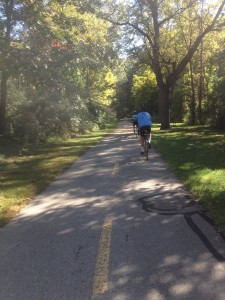 David is an avid road biker, and he took us on regular rides along the Huron River and on the fantastic system of paved bike trails that link the Metro Parks around the city. 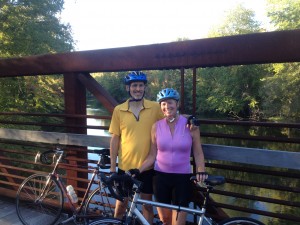 On the weekend we enjoyed a gorgeous paddle down the Huron River, stopping at the Dexter Cider Mill for apple cider, cider donuts, candy apples….yum. You could smell it for a mile and those donuts were the perfect treat.

We enjoyed several yummy dinners with David and Karen and played card games afterward.  I played my first “cooperative” card game called Hanabi where you can’t see your own cards and must work together with the other players (who can see your cards) to try to get as many points as possible. We also re-visited Pinochle – a game our parents used to play – and joked about the family dynamics involved: cheating, yelling, drinking, quitting.  We were tame by comparison! 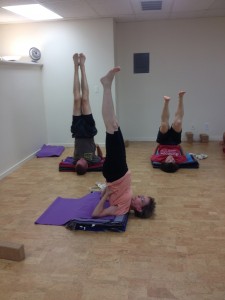 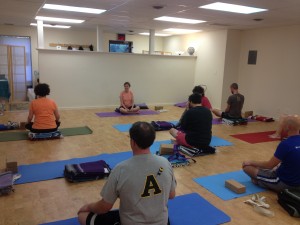 Karen owns her own Iyengar yoga studio, Harmony Yoga, so we were treated to complimentary classes all week. Such a delight!

We had our first “mid-west” experience, which is funny now. On a weekday afternoon we were having thunderstorms and wind, and all of a sudden a huge siren went off. I knew after a few moments it must be a tornado warning, and started freaking out. I looked out the window to see if people were running to the bath house for safety, but there wasn’t a soul in sight. The siren stopped pretty quickly. Come to find out, it was just a test that went off every week at that time. Now that would have been nice to know in advance!

The other mid-west experience was that the sun rose later that far west. I’d be in bed in the morning thinking, “it can’t be time to get up, it’s too dark!”

Our campground was nice but every one has its own flavor. We must have been near a kennel, because on certain days there was quite a bit of barking and it wasn’t coming from anyone’s camper. There was a group of older men who did the maintenance. They would fly all around the dirt roads in a golf cart every day – it became a kind of comedy because everyone else drove 10 m.p.h. Often you would see one person doing a job and 3 watching – like a road crew. There was a good-sized pond on the grounds with a nice, wooded path around it.

We were sad to leave Ann Arbor, but it’s time to spend a few weeks in Columbus, Ohio where Regatta Central is based. I’m due for another work week and Jeff will be traveling to Boston to work the Head of the Charles Regatta.

One thought on “Ann Arbor, Michigan”