Brrrrrrr! Even though Santa Fe is at about 7000 feet, we didn’t expect temperatures down into the teens! Off we went our first evening there to Home Depot for heat tape for the water line, antifreeze for the holding tanks and plastic covering for the windows. Beside burning through a lot of propane for the heater, we were comfortable after all that.

The drive from Carlsbad to Santa Fe was the most harrowing we have experienced so far. We encountered an ice storm and there wasn’t a good place to stop and wait it out. The 4-lane divided highway went through hours of barren landscape, occasionally dotted with oil refineries and large properties covered with broken down vehicles and buildings.  Several cars whizzed past us and ended up inverted on the road – we saw four roll-overs in an hour and a half. The only major town we went through was Roswell, complete with UFO museum and gift shops. 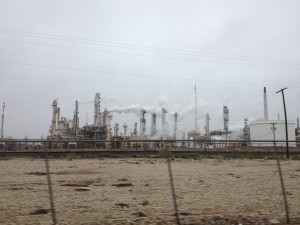 The Santa Fe area is gorgeous. Sitting just at the southern tip of the Rocky Mountains, huge peaks just jut up out of large flat areas. Most days are sunny and, at this time of year, windy!

We stayed at a a friendly little RV Park called Santa Fe Skies. In keeping with the spirit of the town, there were interesting works of art dotting the park. There was also a nice office/gift shop/clubhouse, and reasonably priced propane on site, which was needed often due to the cold!

We were only 50 minutes from “Santa Fe Ski” – a nice local ski area with an elevation of 12,000 feet. We went on a Wednesday afternoon (Jeff’s birthday) and enjoyed a few hours of snowboarding on packed powder. The weather was sunny and just above freezing – perfect. There was a harrowing 15 mile switchback road to get there, though. We passed one accident, and there were lots of places with no guard rail and a sheer drop off the side of the road. We felt bad for the ambulance drivers having to deal with that every time someone got carried off the mountain. It’s hard to capture the beauty of the vistas on camera, but stopping to appreciate the view was a great excuse for catching our breath.

After a great afternoon snowboarding, we found a brew pub in town called Marble Brewery. IPA’s and tamales hit the spot!

The first weekend we were there the area got dumped with snow – 8″ at our RV Park and 18″ just west of us in Los Alamos. Since we were planning to visit Sue’s nephew and family, we spent the morning enjoying fresh powder at Pajarito Mountain – another nice, family ski area with no crowds. After burning our legs out on the slopes, we went for a short cross-country ski to stretch out at the base of the ski hill.

We had a really nice visit with Daniel, Lauren, Owen and Sam. Our timing could have been better because Sam was only 8 days old, but he slept like a baby 🙂 even when I held him. Owen is a little ball of fire at 3 years old. He loves dinosaurs and jumping/climbing on everything in the house including his father.

One evening we drove about 1/2 hour south to a town called Madrid (emphasis on the first syllable). The Mine Shaft Tavern there was having live music. When we walked in, the first thing we saw was the ‘house dog’, a friendly old mutt that made his rounds  getting attention at each table when he wasn’t sleeping.   Passing the pool table, we were seated in a cozy restaurant area with a roaring fire and a 40′ lodge pole pine bar – ‘the longest standup bar in New Mexico’.   It was a “standup bar” to help the coal miners stretch after a long day in the mine.    We couldn’t get a good picture of the bar because we didn’t want to anger the natives, who were totally picture-worthy. 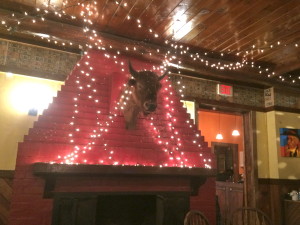 The decor and the clientele were….eclectic. The food and music was mediocre but the experience was worth it. Clearly this was a local hangout in the winter. The town itself boasted art galleries and an old coal mine.

At the last minute Jeff found out he had to spend 2 of the 3 weeks we were in Santa Fe working in Columbus.  One day I took a guided walking tour of the city. The guide was Joel Stein,  a very knowledgable gentleman, who has actually written a book called “Santa Fe in a Week (More or Less): A Guide to Historically Significant Places, Events & Things to Do”. Over about 2 hours we walked around and heard all kinds of interesting tidbits about the history of the city, of which there is plenty! One interesting fact is that the current population is 40% white, 40% hispanic and 20% indian.

Due to the parking meters and the size of growler, I parked at a mall and took the bus into town. As I was sitting in my car, two women got out of the car next to me and came over. FYI: religious recruitment doesn’t stop just because you don’t own a house anymore!  As I opened the door to refuse the pamphlet, my car alarm went off! I still don’t know why that happened – maybe Growler was trying to tell me something…

The town square was a really cool scene with musicians, artists and indian jewelry vendors. After my tour, I had lunch at at Cafe Pasqual’s – a busy organic restaurant. The line was out the door but when I said I was alone they seated me at a “community table”. It was a large table right in the middle of the room where anyone who wants to can sit and get to know new friends. There was a family with 3 young boys, a couple in town for their anniversary and two other women. As soon as I sat down everyone said ‘hi’ and we started talking. I wish more places had a table like that!

The only bummer about Santa Fe is the amount of beggars – homeless and obviously not. Even going to the grocery store can lead to several requests for money, which is pretty uncomfortable.

The second week Jeff was away, I ended up being away for work too, necessitating leaving Growler in the airport long term parking. When we met up at 10:30 Friday night and I showed him where I’d parked, Growler was gone…..