In our attempt to get a feel for different parts of Colorado we moved a few hours north from Colorado Springs. Also, our next door neighbors from New Jersey had moved to Fort Collins two years ago and we wanted to say ‘hi’ to them.  Loveland is about 10 minutes south of Fort Collins, which hosts one of the Colorado State University campuses and has a fun downtown. There are all kinds of shops and breweries, and bicycles are a common conveyance.   Loveland and Fort Collins has a huge network of bike paths, all with a great view of the “Front Range” of the Rockies.

We stayed at “Loveland RV Resort”. It was a clean, well-run park on a busy road with a very friendly staff. The wi-fi was pretty good and at least half of the residents live there full time. Every morning at 5:30 the neighbor right behind us started and warmed up his very noisy diesel truck to go to  work – we named it “the wake-up truck”.

There is an incredible amount of building going on in this area. Houses (starting in the mid $300,000’s), townhomes and new retail centers are going up everywhere. True to Colorado form, there are recreation trails and protected areas built in-between the developments. 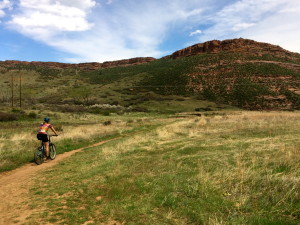 Our first weekend day here together, we went up to Horsetooth Mountain Park. There are lots of challenging but gorgeous mountain bike trails there (as well as a reservoir with a rowing club!). After a 12-mile or so ride along the rocky, winding trails, we were about a mile from the parking lot when a bee buzzed in my helmet vent. I was going downhill around a turn, and I guess I let go with one hand. The next thing I knew I was flying through the air. Fortunately, I landed on a bush and not a rock or cactus. At some point my handlebar smacked my left thigh pretty well, but thankfully nothing was broken. We finished the ride and picked up some frozen corn at the local convenience store. Even though I spent the rest of the day icing and elevating my leg, it was swollen, bruised and tender for weeks.

The next day, we drove out through Estes Park – a mountain town at the base of Rocky Mountain National Park. Getting there was exciting – the road wound through 20 miles of canyon along the Big Thompson River. We could see evidence of the devastating flood that happened there in 2013 including several condemned houses.  I had the best breakfast ever there – eggs benedict layered with fried eggplant, artichoke hearts, spinach and peppers. Then we re-purchased our annual national park pass (yep, that was in the truck too) and drove through some of the park. The higher elevations were still closed due to snow, but it was gorgeous and we hope to come back for some hiking or snow sports in the future.

We had a fun dinner in Loveland with our former NJ next-door-neighbors Dennis and Joy, and then visited them at their house in Loveland another night. As I expected, their house is beautiful and Joy has decorated it with much style. It was great to see them – they totally fit in there.

One thing I’ve seen in a few towns on our journey is these “little libraries”. It’s a fun, take-a-book, leave-a-book kiosk which works perfectly for our lifestyle! 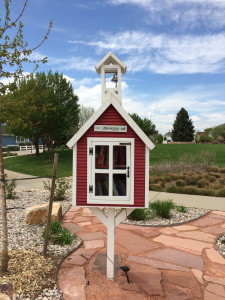 We spent a day up in Cheyenne, Wyoming, which is about a half hour north of Fort Collins. Cheyenne is a huge train town, and we visited the train museum there. Not only did they have an incredible amount of memorabilia from the building of the Union Pacific Railroad through the area but a local train buff donated an extensive model railway system. The young man (12 maybe?), Derek, who operates the model was also very knowledgeable. 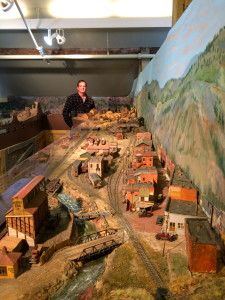 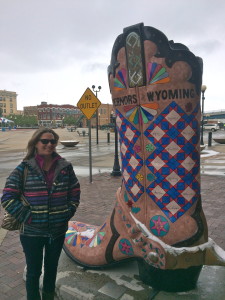 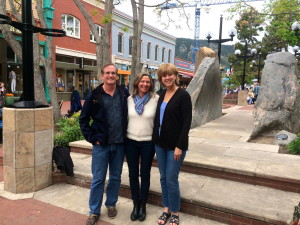 We headed down to Boulder for an afternoon to meet up with a high school friend of ours, Debbie. Thanks Facebook. She and I were in Kingswood High School’s production of “The Sound of Music” together, and Jeff’s parents are friends of her parents. It was great catching up and hearing about the town Debbie lives in,  Nederland,  1/2-hour drive up into the mountains from Boulder.

Boulder is a hip place hosting a vibrant downtown and Colorado State  University.

The weather in Loveland, was, er, interesting.  It was one of the wettest and coldest Mays on record.  It rained 19 out of the first 21 days! It was all everyone who lives there could talk about since Colorado weather, at least on the “front range”,  is usually sunny.  Luckily our campground was not the one that had to be evacuated because of flooding!

While Sue travelled for work (twice in the month we were there), Jeff had the chance to visit with 2 former bosses/friends from Mountain Creek, Alan and Rob.   They love Colorado like everyone else we have talked to out here.

Now, we’re off to Yellowstone for 4 days of vacation!