Through Facebook I got reacquainted with a high school friend, Jock, just before we left New Jersey on our adventure. He has a gorgeous house in Hood River, Oregon, which is about an hour east of Portland. When we started making plans to visit that area, it worked out that Jock needed a house-sitter during part of the time we’d be there. After a harrowing trip up his 1/2-mile long, steep, gravel driveway with a hillside on one side, a sheer dropoff on the other, and a challenging turn-around at the top, we spent two weeks enjoying his amazing view and taking care of his dog, Roo.

We had dinner with Jock in the Pearl District of Portland before he left. It is a vibrant downtown full of restaurants with outdoor tables and all kinds of people and dogs. Dogs are welcome almost everywhere, and often cause you to meet lots of people for petting-fests.  We waited 20 minutes in a line that wrapped around a corner for some very good ice cream at Salt & Straw. They had unusual flavors such as ‘Strawberry Honey Balsamic with Black Pepper’, ‘Petunia’s Coconut Strawberry Rhubarb Pie’, and ‘Almond Brittle with Salted Ganache’.

Hood River is a town of about 7000 people that has become a mecca for kiteboarding and wind surfing. It sits on the Columbia river, which  has created an 80-mile long gorge. The wind comes whipping through the canyon in the afternoons creating perfect conditions. There’s plenty of public river access downtown, including a convenient spit of sand where the Hood River joins in.

We had lunch downtown one day and the restaurant not only had dog treats but also a corn hole game out front. Some folks from a neighboring table engaged us in conversation for a while. 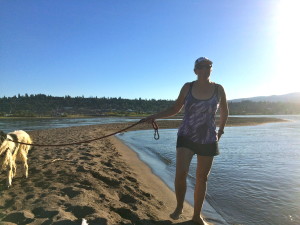 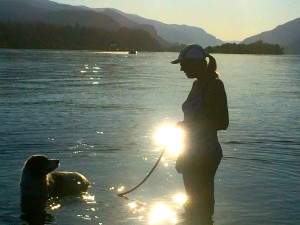 The water is clear and cool so swimming is popular too. Most of the time we were there, the weather was hot and sunny – not typical of the Pacific northwest! 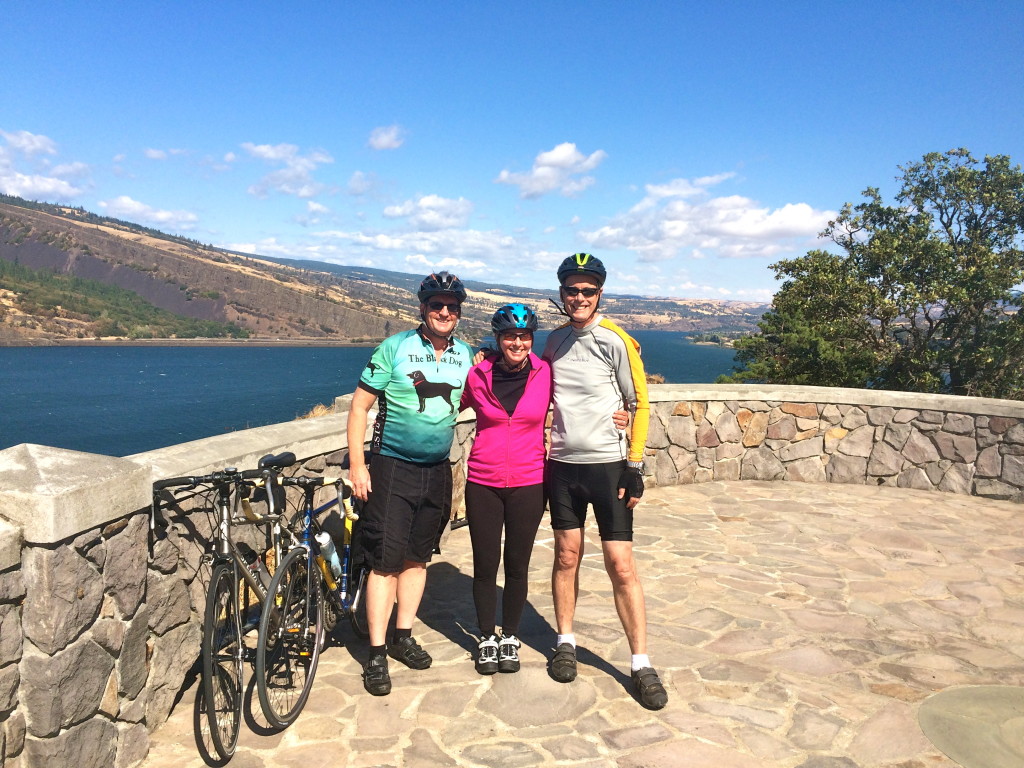 There’s also a nice paved bike trail along the bluffs with great views.  Much of the river valley is still farmland – primarily pear orchards. It’s the kind of area where you can stop for all your veggies at a farm stand, then go get some salmon that was caught earlier that day and watch them filet it right there in the little stand. There are lots of wineries and breweries and,  true to Oregon form, bikes and coffee. Jock turned me on to “10 Speed” coffee, and I don’t think I’ll be able to buy grocery store coffee ever again. They support biking as well as use sustainably sourced coffee beans. They roast them every day in small batches, and the taste is incredible.

The area is also known for its many waterfalls. We hiked a part of the Pacific Crest Trail called Eagle Creek. My two brothers, Richard and David, had hiked the PCT from Mount Hood to the Columbia River a few years ago. It was cool to know we were right where they had been.

After the hike we stopped at the Bonneville Dam and fish ladder. It was really cool to see the huge salmon working their way up the ladder to get around the dam. There was even an underwater observation area in the visitor center. We were lucky enough to be there when a huge barge entered one of the locks. We watched it disappear as the water was lowered, then saw the turntable bridge opened to let the barge pass by. Such huge feats of engineering!

Mount Hood is amazing. At 11,250′ it has snow on top all year round. We drove up to Timberline Lodge on a warm Saturday and happened upon a folk festival (free! with expensive food and beverages). We sat outside in a small amphitheater and enjoyed the music for a few hours with beautiful mountain views behind the stage. Good people-watching too. 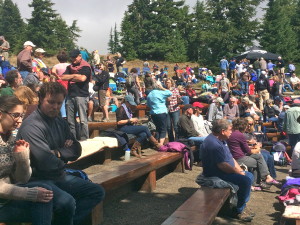 Built in the 1930s, Timberline Lodge is the building used in the filming of “The Shining”.  It’s still an active hotel and ski lodge. 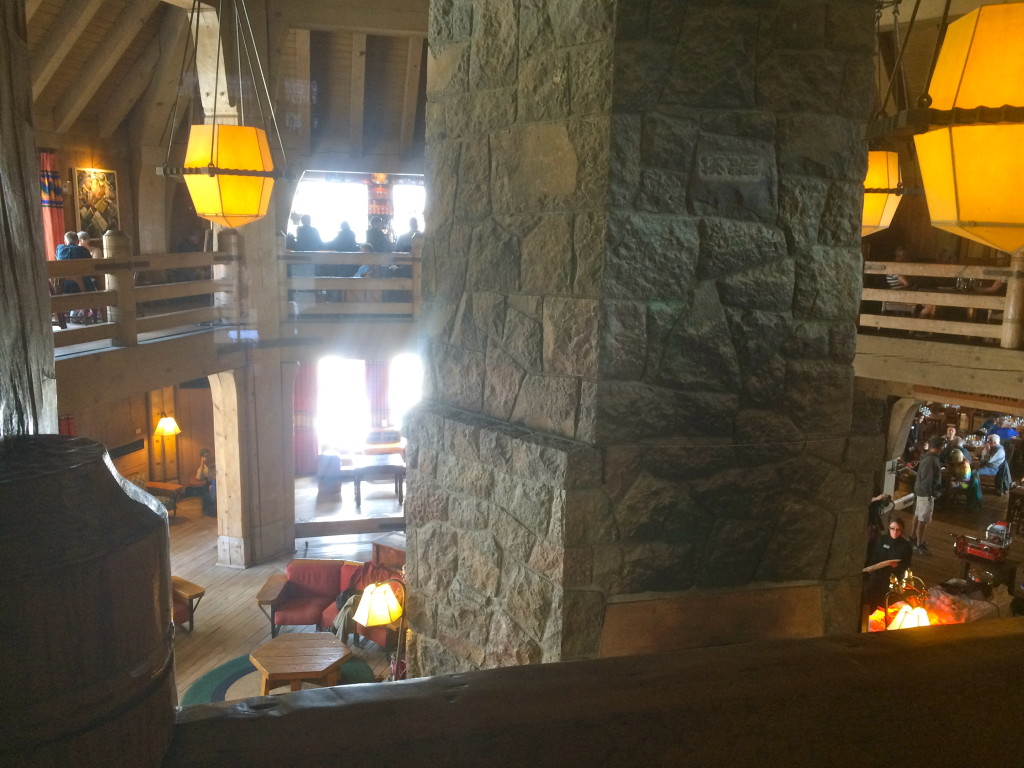 When Jock first left Roo was a little sad, so we took her on a 5 mile hike. We’ve been best buds ever since.

We finally got the work done on Monty that was supposed to be done in Washington (when they just burglarized it instead). While we waited we went to Multnomah Falls: a popular tourist destination which gets 2 million visitors a year. We couldn’t believe how many people were there in the middle of the day on a Friday in late September. The falls were pretty, though.

After I returned from a work trip, we spent one more day knocking around downtown Portland. It really is a fun city. We walked around an outdoor market, took the trolley to Nob Hill and several other districts. Portland is all about bikes, coffee, brews and dogs. 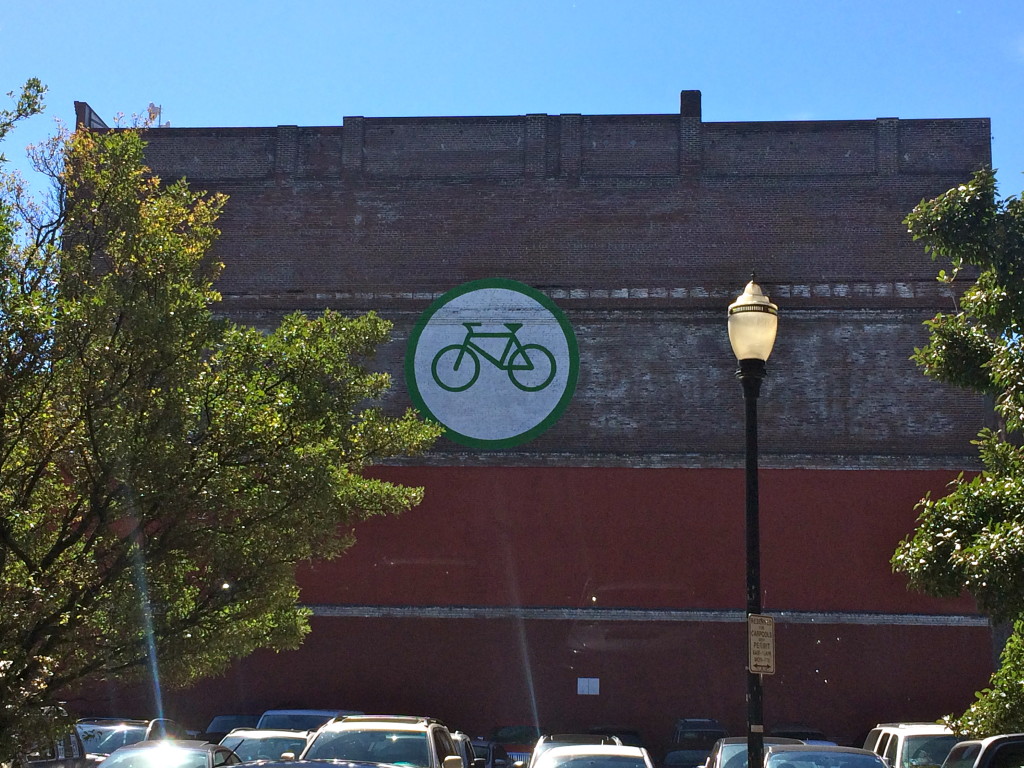 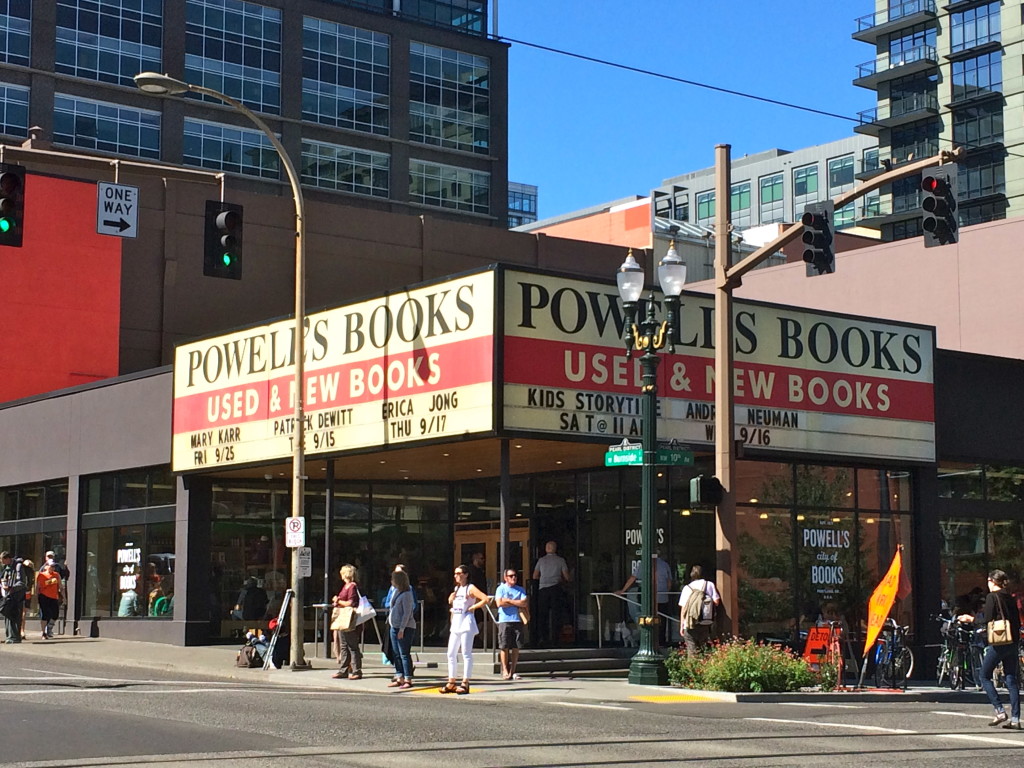 We can’t believe it’s already fall – time to flee south before it gets cold again.