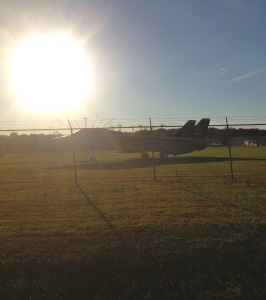 We thought the dragster maintenance in Delaware was loud…  But then we arrived at our campground in Virginia Beach.   Yeah, it seemed to be near the Naval Air Station Oceana, but we had no idea! The first few days  you could hear jets flying around but it was nothing crazy. Then they must have switched runways!  We were apparently on the final approach, and even while landing, they are LOUD!   On Friday, the George HW Bush aircraft carrier returned after a 9 month deployment, so the entire air-wing  flew over our trailer!  Even Jeff, who generally likes airplane noise, got overwhelmed!

As we continued to run south before winter, we were again parked under a big tree that was merrily dropping huge acorns on our roof. We gradually stopped jumping every time a loud “thwack!” came from above. I was almost scared to go outside without a helmet on! Every day I had to sweep 30-40 1″ acorns off our outdoor rug so we didn’t look like one of those pranks where people are slipping on marbles. The most awesome thing about this location was its proximity to the beach. Virginia Beach has a 3 -mile long boardwalk, and there was a bike trail all the way from our campground to the shore. Even though the polar vortex dashed any ideas we had about warm weather, we had plenty of sunny days to bundle up and ride around. 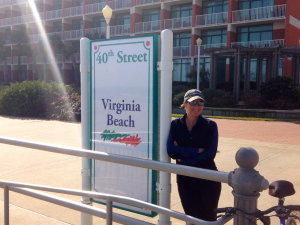 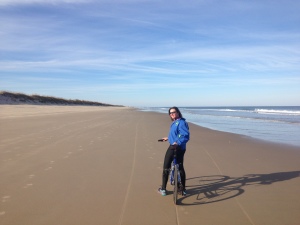 On the weekends we made some excursions to local state parks and wildlife refuges. One thing that seems common in the south compared to the north is being allowed to ride your bike on the beach. I’d never done that before and it was joyous!

At First Landing State Park the trail wound through woods with spanish moss hanging from the trees – a creepy-cool look.

For the holidays, the town puts up Christmas decorations on the beach. For a fee, you can drive your car down the entire boardwalk while listening to a special radio station. This year’s theme was ‘the 12 Days of Christmas’. It was pretty cool but hard to get good photos of.

The highlight of our stay (and the reason we chose to be there) was seeing Vicky and helping her get set up in her apartment. Her current deployment is in Norfolk, and Jeff got a tour of the base and the pier her ship, The U.S.S. Barry, is on. 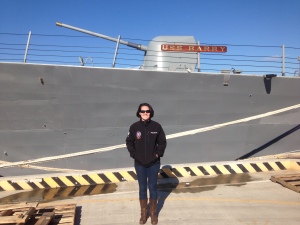 Now we’re off to Jacksonville, Florida where Jeff will be attending the U.S. Rowing Convention.