The whole reason we came east for the summer was to attend my son Jason’s wedding to Virginia Hall in August.  A gorgeous farm in the Catskills had been chosen and we were thrilled to find out there was an RV-friendly campground 2 miles from the venue.  We arrived a week early to have some family time with my brothers and their children and grandchildren.

We had some fun kayaking, walking and generally hanging around with everyone for 4 days before the big event. Let me just say, it was HOT. And humid.

Roxbury is a quiet little town where they purposely do not have a lot of cell phone towers so people actually disconnect while on vacation. This made making arrangements with my family a little challenging at times.  We ended up being given the wi-fi password of a neighbor (by another neighbor!) which only worked while we laid on the bed and held the phone up to the window. Often email worked but not messaging!

My brother David, his wife Karen, their son Ben and his girlfriend AnnieJae, David and Karen’s son Daniel and his wife Lauren, and Dan and Lauren’s two boys (Owen and Sam) all arrived Monday.

We rented kayaks from “Susan’s Pleasant Pheasant Farm”, which was also a bed and breakfast. The stream wandered on for a while through grassy areas with interesting birds, flowers, a beaver dam and even an otter! Then, it got pretty shallow. We got out and dragged our kayaks further, only to be stopped again by shallows. Owen was not done kayaking and attempted to pull David further up stream.

The friendly owners of the B&B shared their interest in rock collecting with us after finding a kindred spirit in David (a geologist). 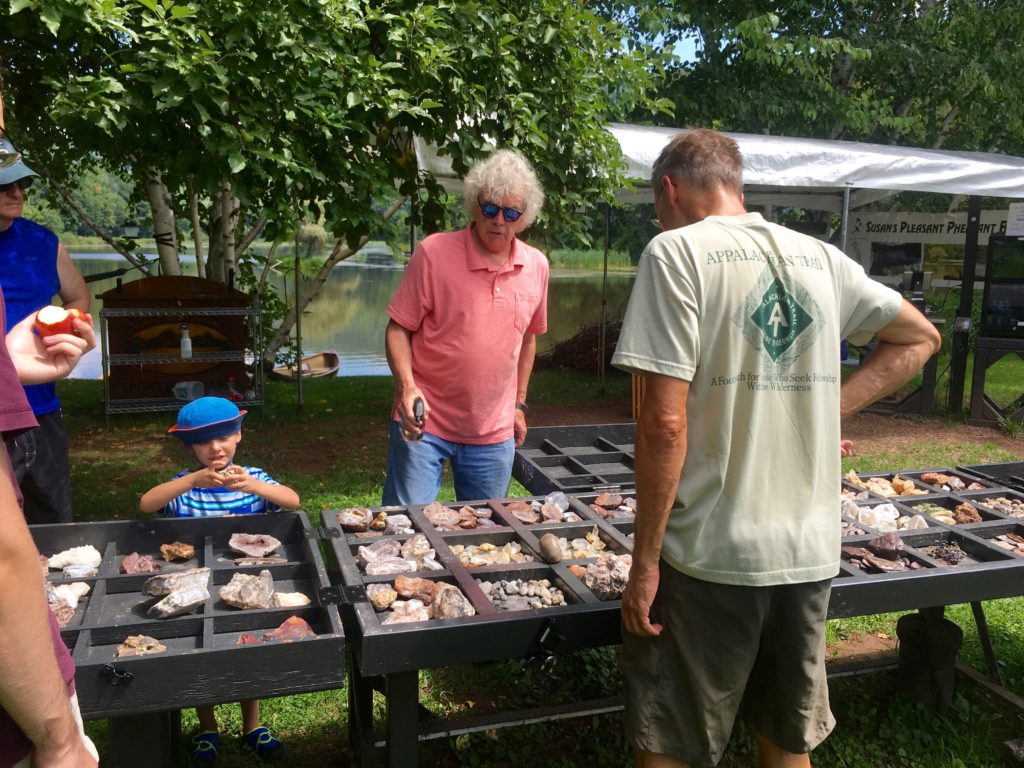 Sam and Jeff continued their connection from when we visited them in Los Alamos last Christmas.

The wedding was amazing. It was a weekend-long event with a Friday night welcome dinner (for all guests), a first look Saturday afternoon for the wedding party, the wedding Saturday evening and brunch Sunday morning.  The Catskills are typically 10-15 degrees cooler than surrounding areas due to the elevation, but not this year. Did I mention it was HOT? Think 86 degrees and humid. Unbearably humid. Most of the houses people rented did not have air conditioning because it is never that hot there. We were one of the few who had air conditioning and slept. On the flip side, our campground experience was one of the more…ahem…interesting in all of our travels.

To get to Stratton Falls Campground, you drive about a mile out of Roxbury, past the gravel pit and large equipment on the side of the road, past the random bathtub sitting on the side of the road until you see the sign for the trailer park. That is not the campground – it’s a trailer park you drive through to get to the campground. The friendly owners met us and escorted us through the trees and down a steep dirt road to an open field and gave us our choice of sites. We found a nice spot under some shade trees and next to some weekend neighbors.

After parking, we noticed one tree branch was up against Monty. The campground owner got out his hacksaw, but our friendly neighbor put down his beer can and went into his shed, yelling “I got this: I have my chainsaw”. Clearly, our arrival was the most interesting thing that had happened there in a while, because yet another neighbor showed up almost immediately with HIS chainsaw. They were both furiously pulling on the starters while the calm, elderly camp host was sawing away with his hacksaw. The branch was only about 2″ thick, and he made quick work of it. One of the chainsaws started up just as the offending branch was dragged away. The neighbors turned off their machines with great disappointment and ambled away, back their Coors Lights.

So we had power, sewer and water. But as the owners prepared to leave they said, “You know about the water, right?” Um, no? “Oh, well you can’t drink it.” Now that was a first. “Oh it’s fine for showering and such but not really safe to drink.” Re-enter friendly neighbors. “There’s a natural spring just down the road (3 miles) behind the auto repair place. Here are two huge jugs you can borrow.” Now re-thinking our entire 8-day stay.

Our campsite was actually really beautiful: we were nicely shaded and faced a large field of mostly empty sites. We had David, Karen and family over for a BBQ Monday night and played Frisbee and boccie.

Our friendly neighbors’ favorite activity was sitting on their porch playing cards, drinking, smoking and swearing (they were from Long Island). Occasionally, we were driven inside by this, but hey, they were friendly. Across the way, however, was a different story. We were outside enjoying the evening (under our mosquito netting) when we began to hear heated shouting. I have never in my life heard people screaming at each other with such vitriol. It was a little scary. The friendly neighbors said “Oh, here we go again” and promptly began setting off fireworks over the field in retaliation. There was a little break in the action, and then it started up again. For an hour. We went inside, and for the first time felt a little uncertain about our security. These people were clearly very drunk and very angry. Fortunately, they left the next day for the rest of our stay. 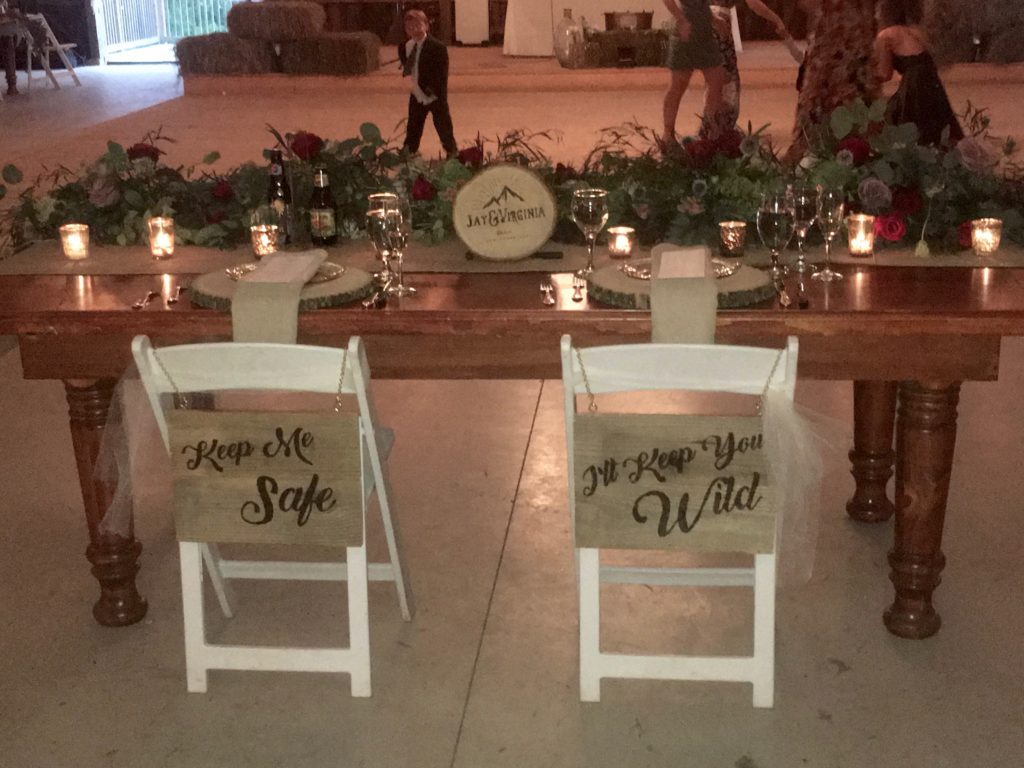 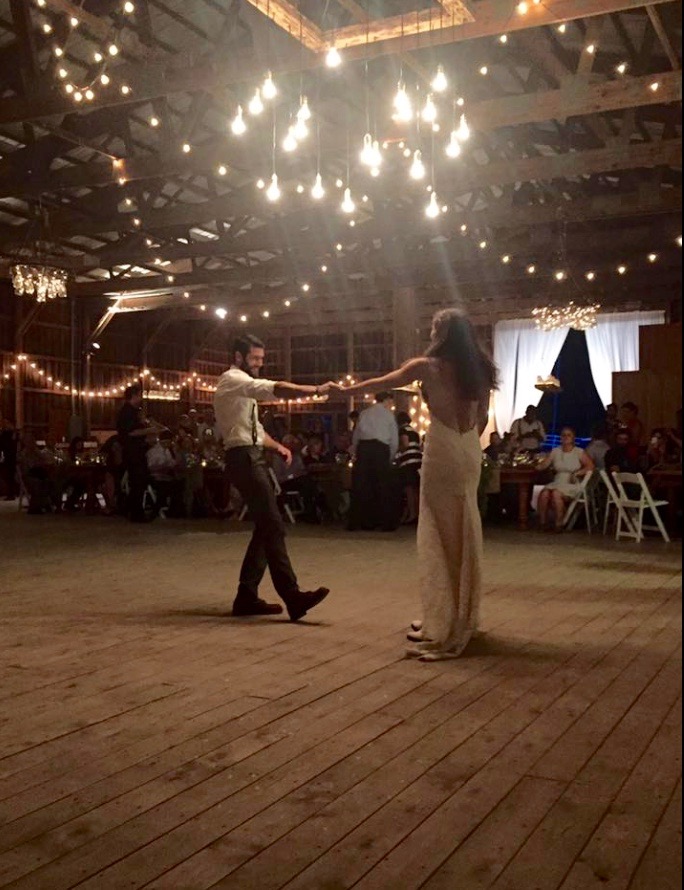 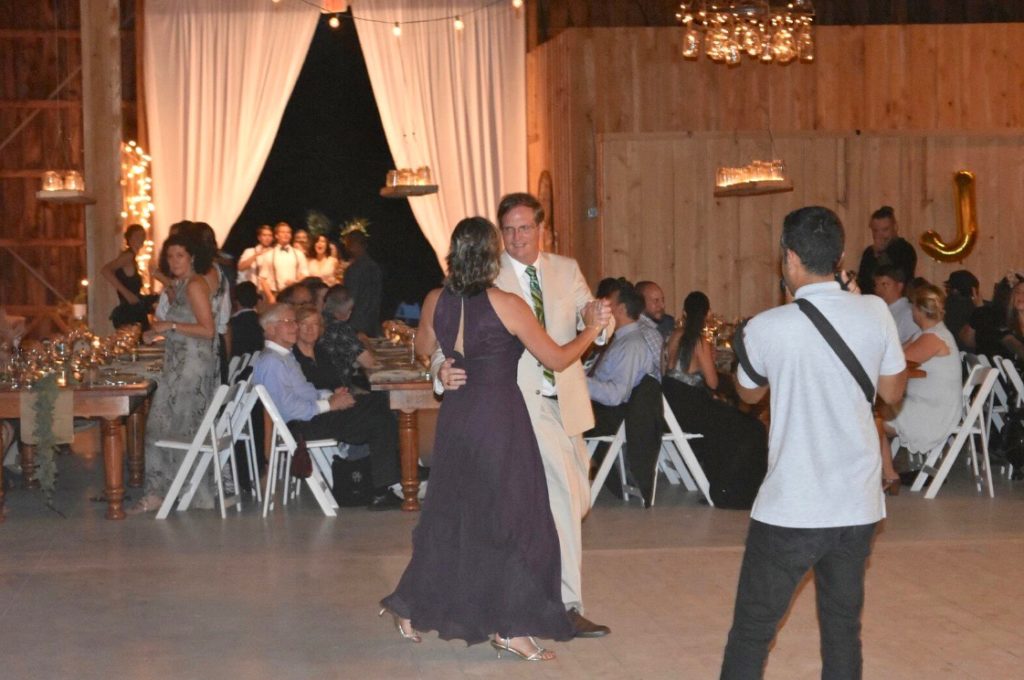 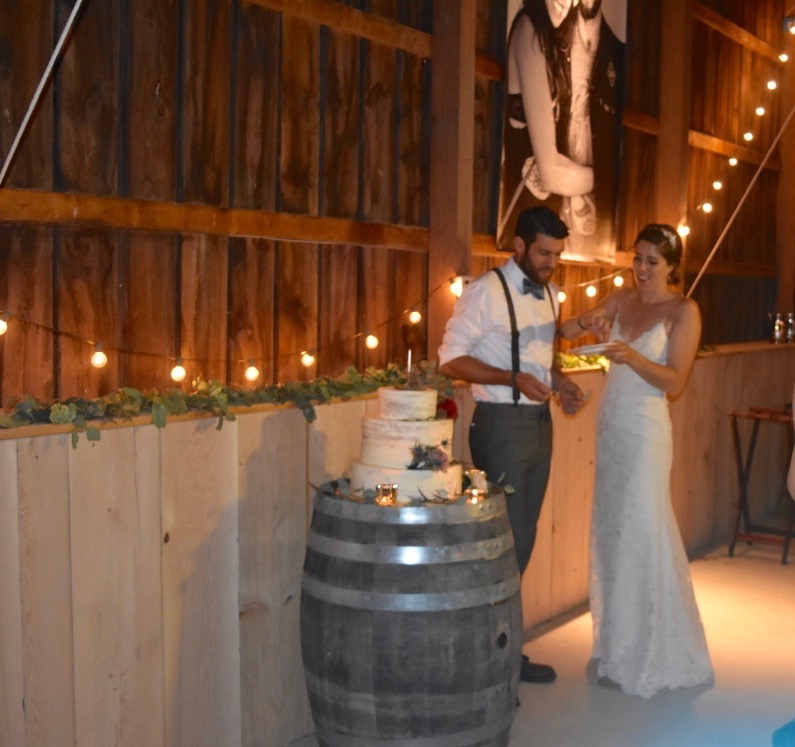 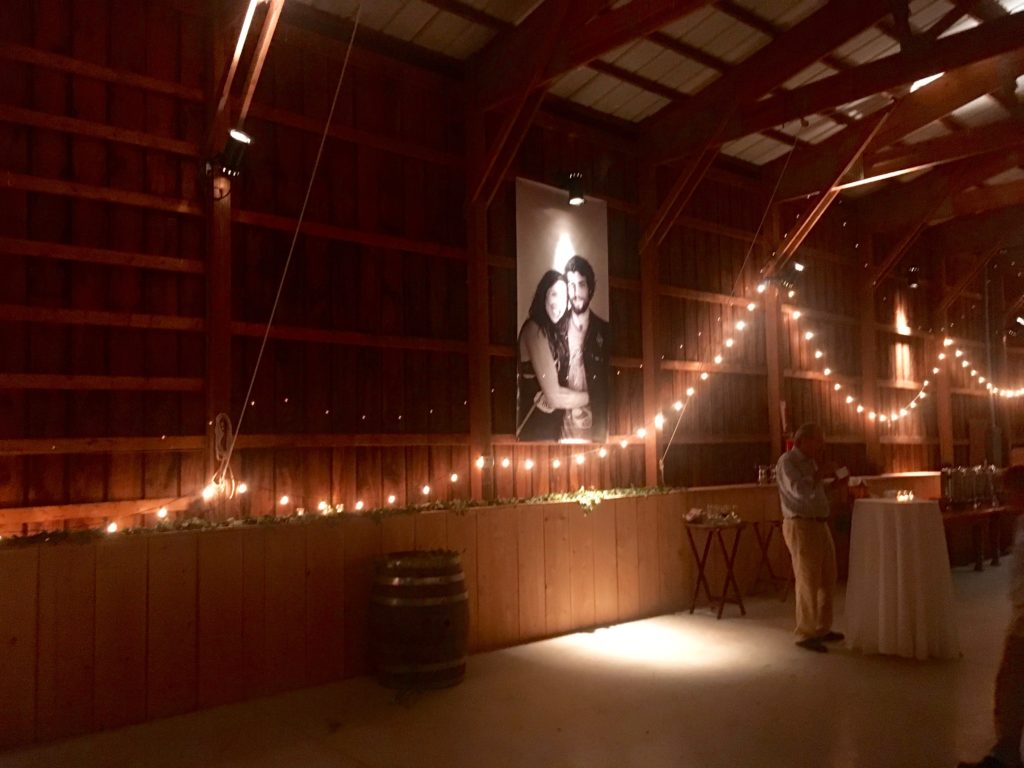 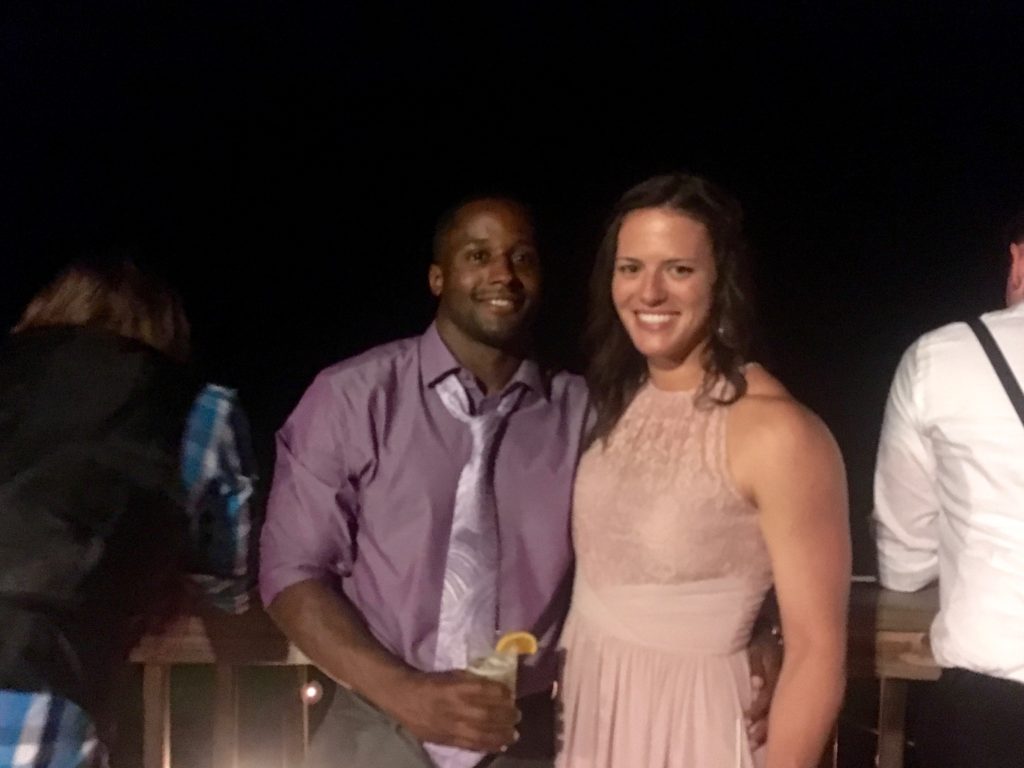 I purposely didn’t take a lot of photos of my own because I just wanted to enjoy it. So, a lot of these are screen shots from Facebook posts or low resolution copies from family members. I cannot wait for the professional ones to come out!

Sunday, after most everyone had gone, Jeff and I toured the farm on ATVs – it was an exciting way to see the property! 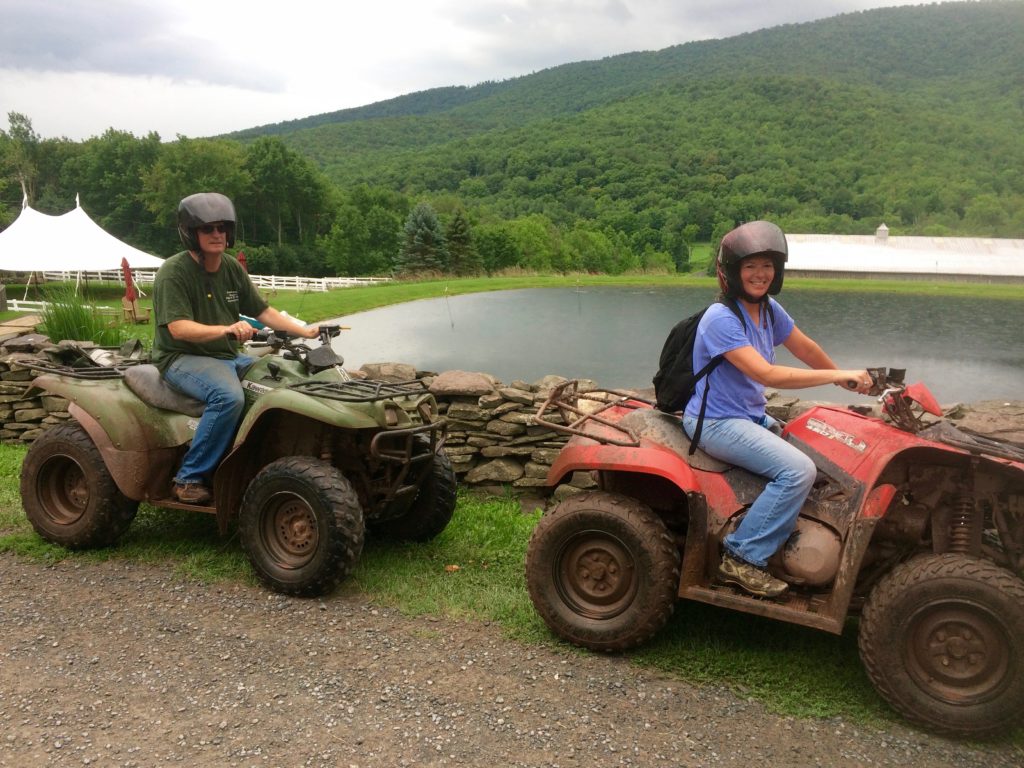 Virginia and her mom, Constance, are both very creative, detail-oriented ladies, and they worked very hard to make the wedding an incredible event. We so enjoyed every moment of it and are thrilled to have Virginia a part of our family.