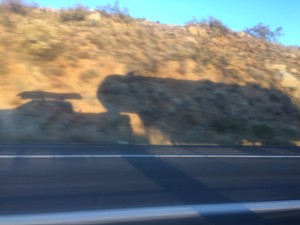 We found a real gem in the middle of Arizona:  Zane Grey RV park. It has a wonderful mix of multi-month residents. Many are repeat snowbirds from Canada and Colorado and other cold areas.   There is a community fire pit which people frequently use, many social events, relatively quiet and inexpensive to boot! The owners really make an effort to get people together, including providing free coffee and donuts every Saturday morning, hosting a big pot-luck breakfast once a month and providing wood, chairs, and blankets at the popular fire pit.  We ended up staying for 2 months, so this post is pretty long.  Enjoy!

The location is right in the middle of Arizona, so there was access to everything Arizona had to offer.  We originally considered the Flagstaff area but we were concerned that the altitude would make it too cold.  Sure enough, it had some sub-zero nights while there..   Some of the nights in Camp Verde were cold as well, but at 3500′ it tends to warm up a bit faster.

We were about 35 minutes from Sedona and the beautiful Red Rock canyon.   We couldn’t stop saying “Wow” each time we saw it. 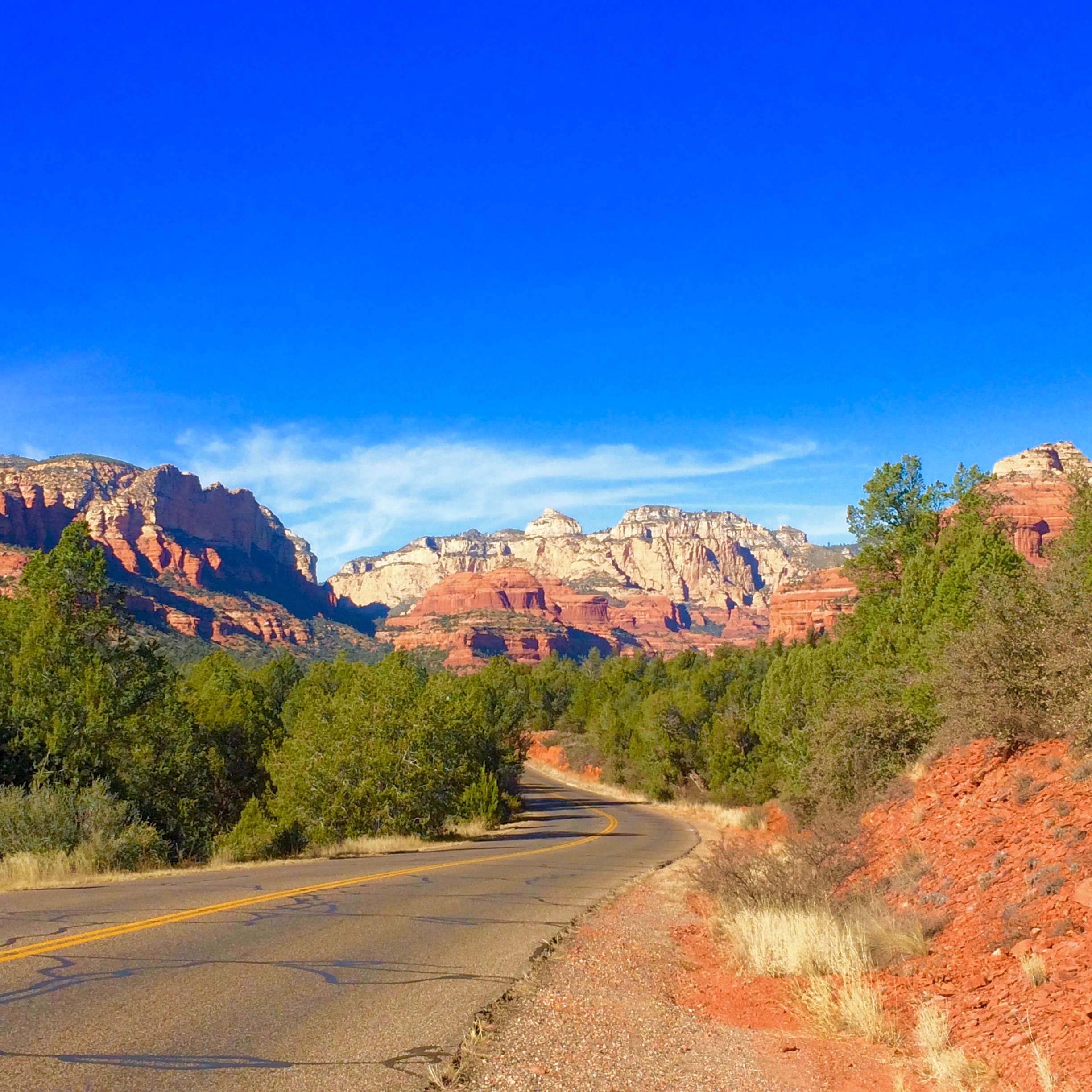 A funny part of this trip was: as we headed into Sedona for the first time to do some mountain biking (which it is famous for), we stopped at a “visitor center”. Problem was, it was not really a visitor center: it was a storefront for a timeshare company. The very friendly person behind the desk gave us a map and pointed us toward some trails, then asked us if we planned to do a jeep or helicopter tour while there. We replied that these things were outside of our budget, and she then offered is an incredible discount on both if we would “tour their resort”.  She never actually used the word ‘timeshare’ or we may have declined. But we really liked what we had seen of Sedona so far and would consider coming back, so we said yes. Well, we sat there in the ballroom with the poor salesman who kept asking about our vacation plans. You can imagine his deflation when we described our current lifestyle. They held up their end, though, and the helicopter ride was one of the highlights of our stay! The jeep tour was fun (if bumpy) too. 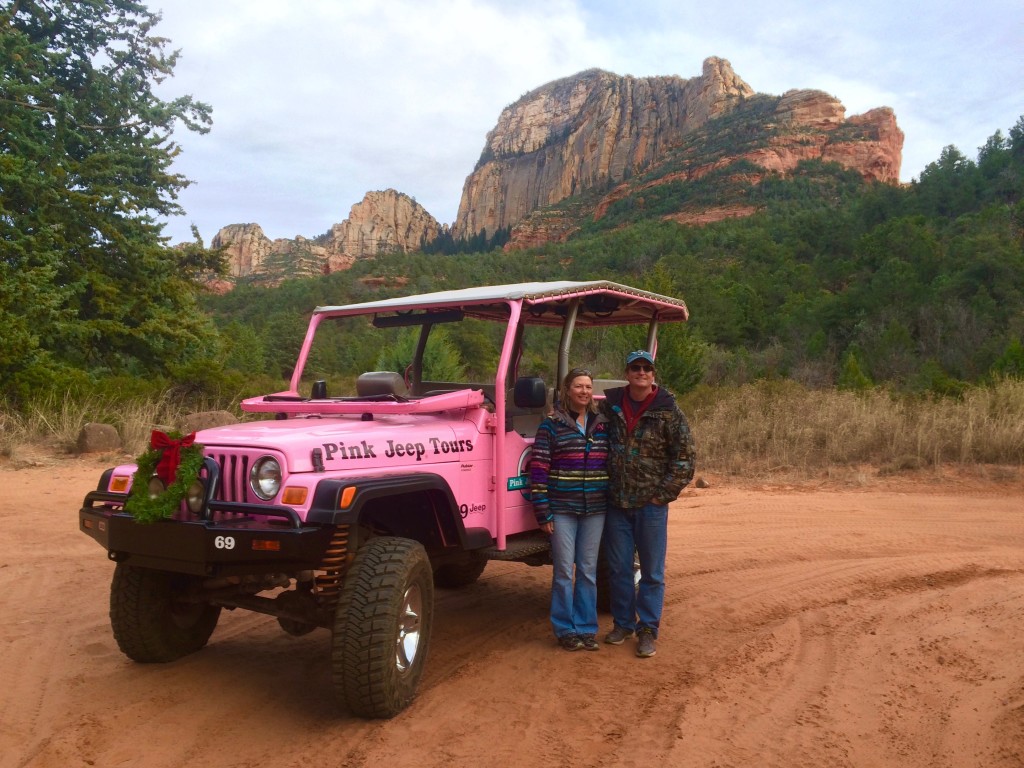 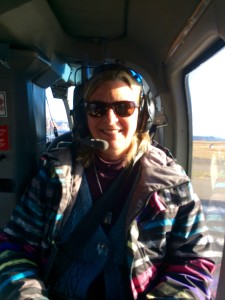 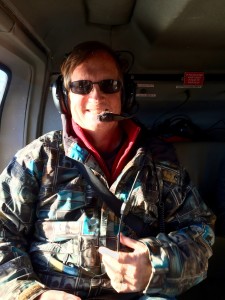 There is also the ghost town of Jerome, an old copper mining town that was mostly deserted when the hippies moved in. 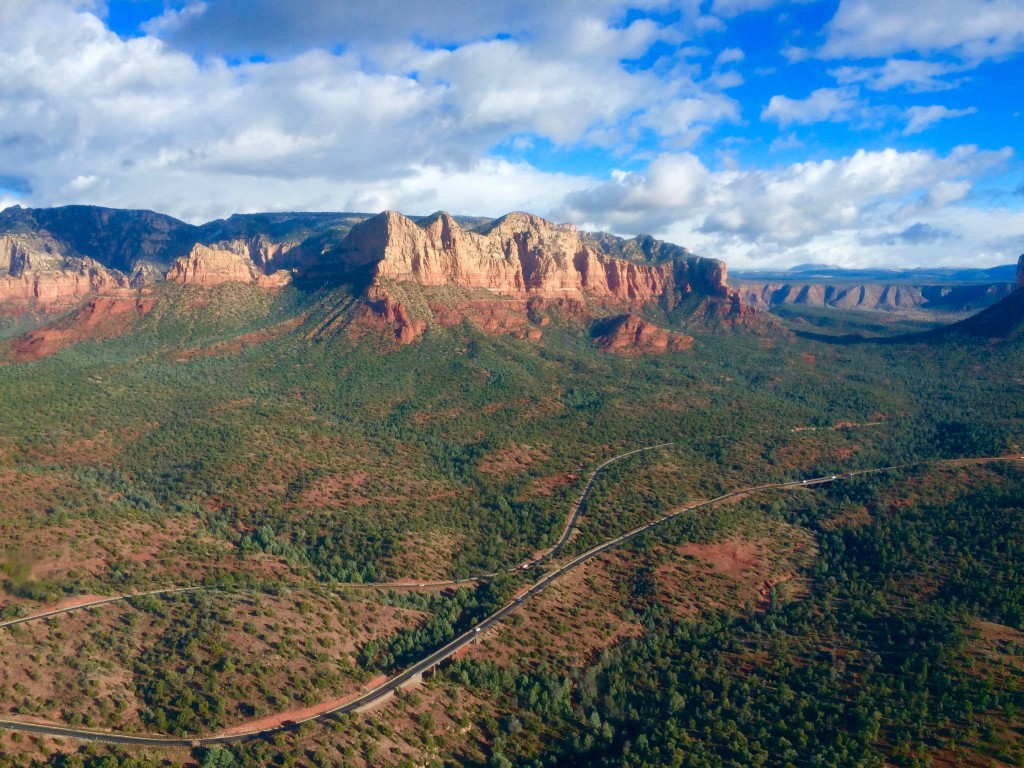 The mountain bike trails were as amazing as they are said to be. We were in a bit over our heads at times, but there’s aways hike and bike! 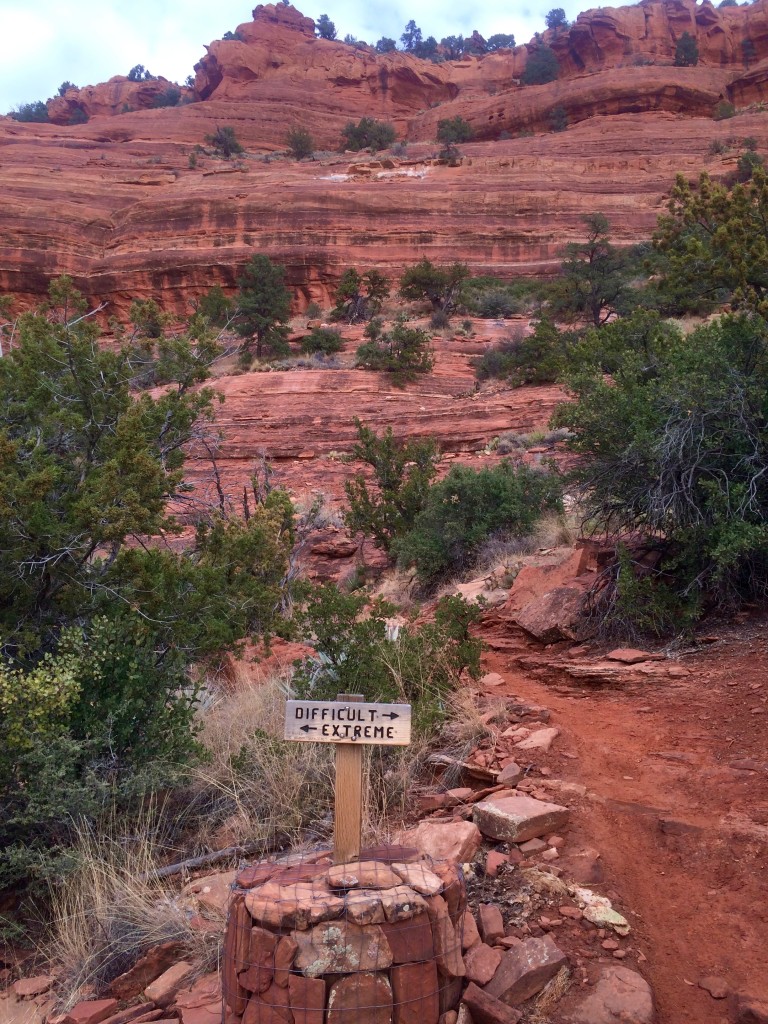 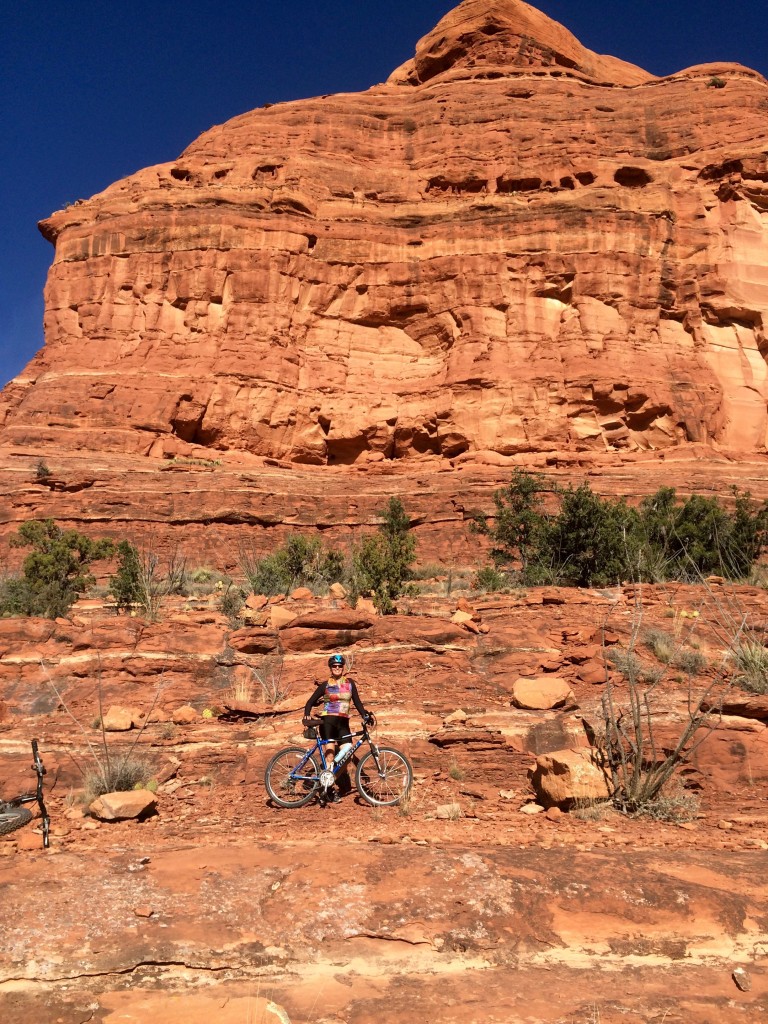 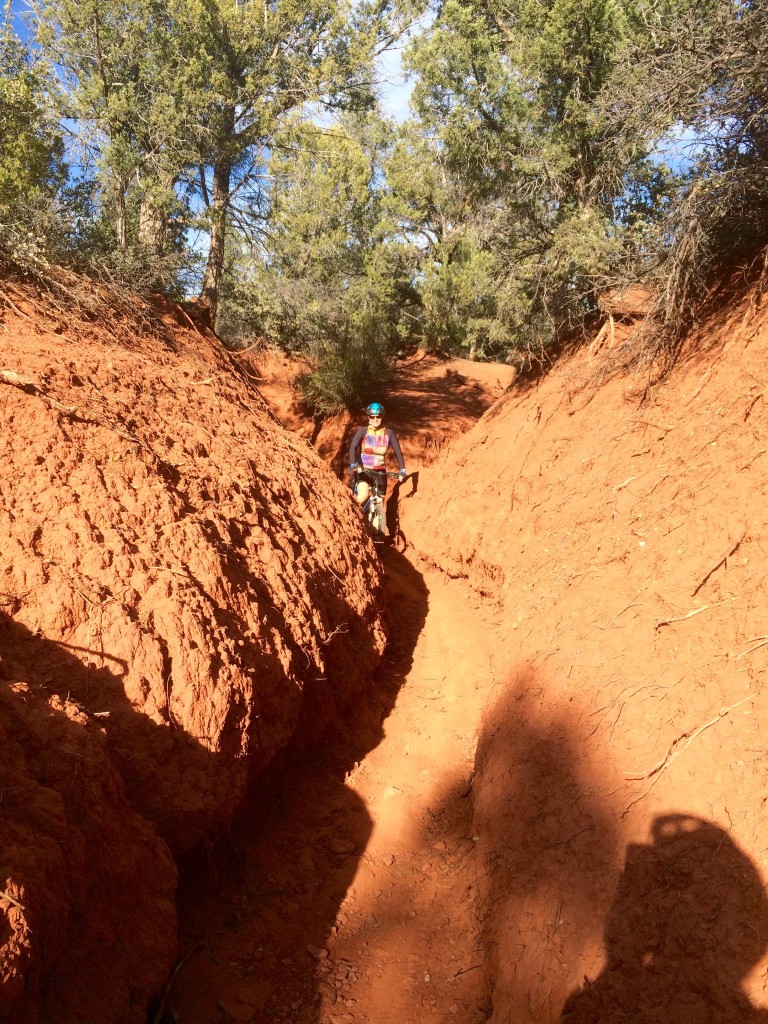 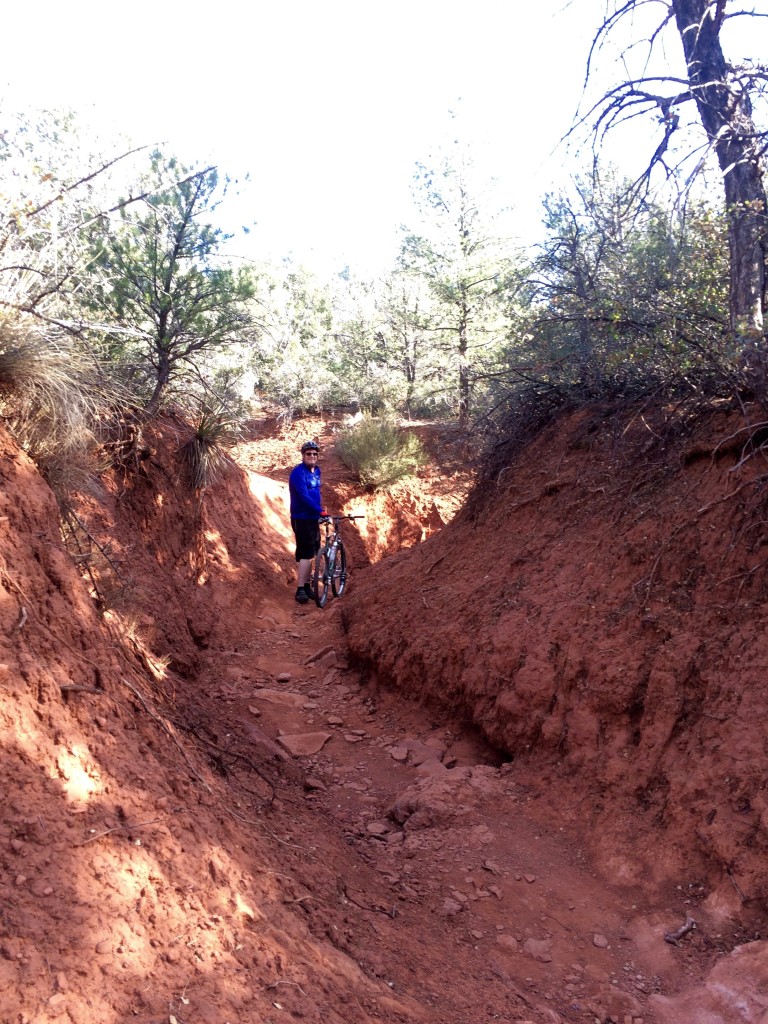 On our first weekend there, we drove up to the Grand Canyon (more “Wow”s).  Since it was a bit of a drive, we did not get a chance to hike, but we will head back at some point and explore it more.

We were hoping for some cross-country skiing, and Flagstaff rose to the occasion with a 3 foot snowfall! We found a nordic center and had a great time skiing both day and night. We met some folks from New Orleans who spent a night in a yurt at the summit. They had a most adorable puppy with them that I wish I’d gotten a better picture of. 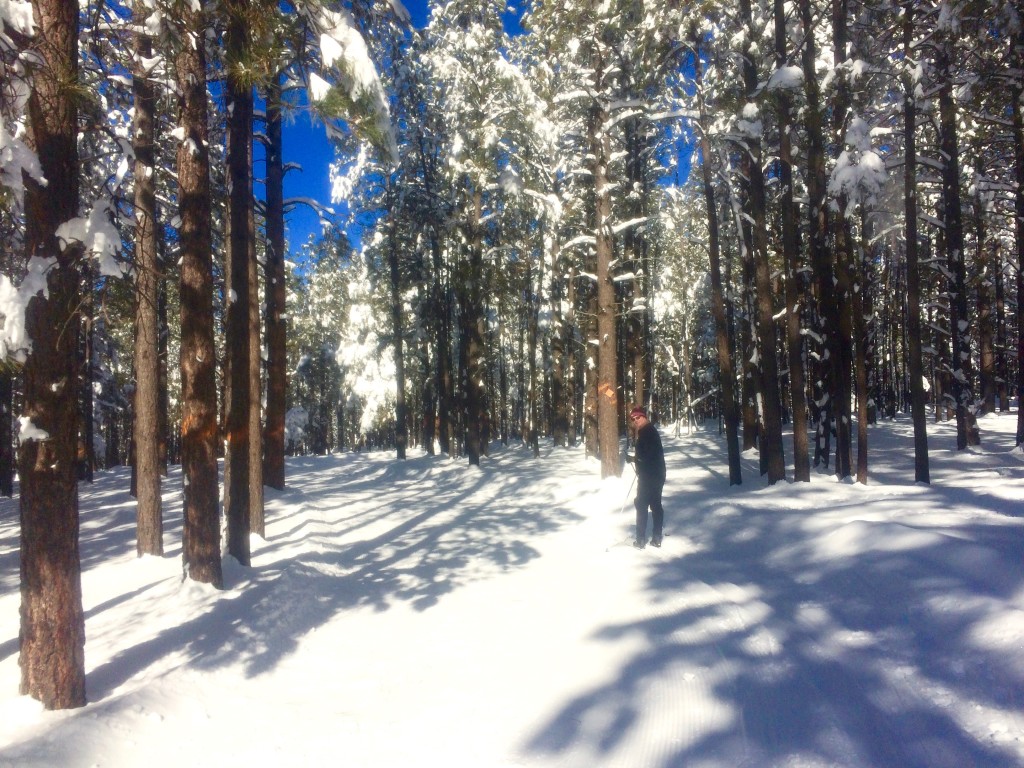 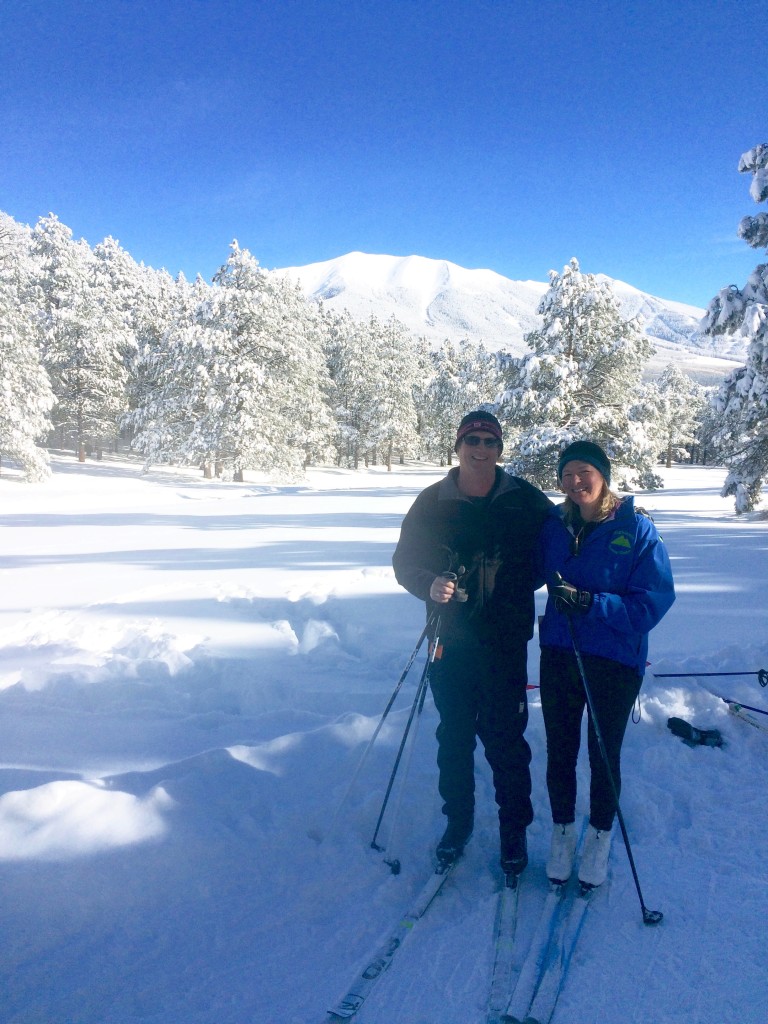 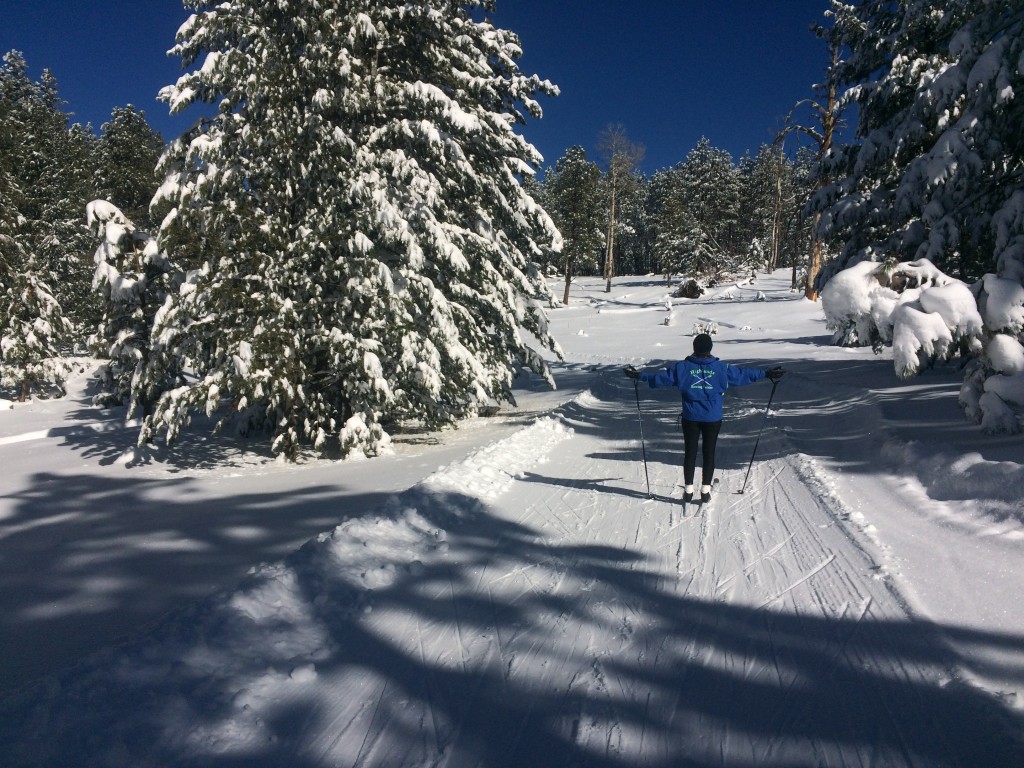 One thing that amazed us was how many people flock to Flagstaff just to play in the snow. At first we were puzzled about why so many cars were stopped along the roads. But then we saw everyone making snowmen, snowballs, snow angels, etc.  Along the same 2-lane road northwest of Flagstaff was: Snow Bowl ski area, the nordic ski center, several parking lots for sledders, and a snow play center, which was packed by 9 a.m. Whenever we traveled to or from the nordic center we inched along for miles in traffic.

At Christmas time we drove over to Los Alamos, New Mexico where Sue’s nephew Dan lives with his wife, Lauren and two children, Owen and Sam. Sue’s brother, David, and sister-in-law, Karen, also visited from Ann Arbor. Los Alamos has had a snowy winter and we enjoyed some skiing there, too.

Dan and Lauren had just closed on a new house so we got to see that even though they hadn’t moved in yet.

While in Los Alamos, we visited the old section and some museums, learning all about the secret laboratory where the atom and hydrogen bombs were developed. A lot of the housing in town is original government-built, and the National Laboratory still employs the majority of the towns workers.

On the way to New Mexico we stopped in another National Park: Petrified Forest. It was amazing to see the colorful rocks that used to be trees millions of years ago.  Along the way we got some vistas of the painted desert. 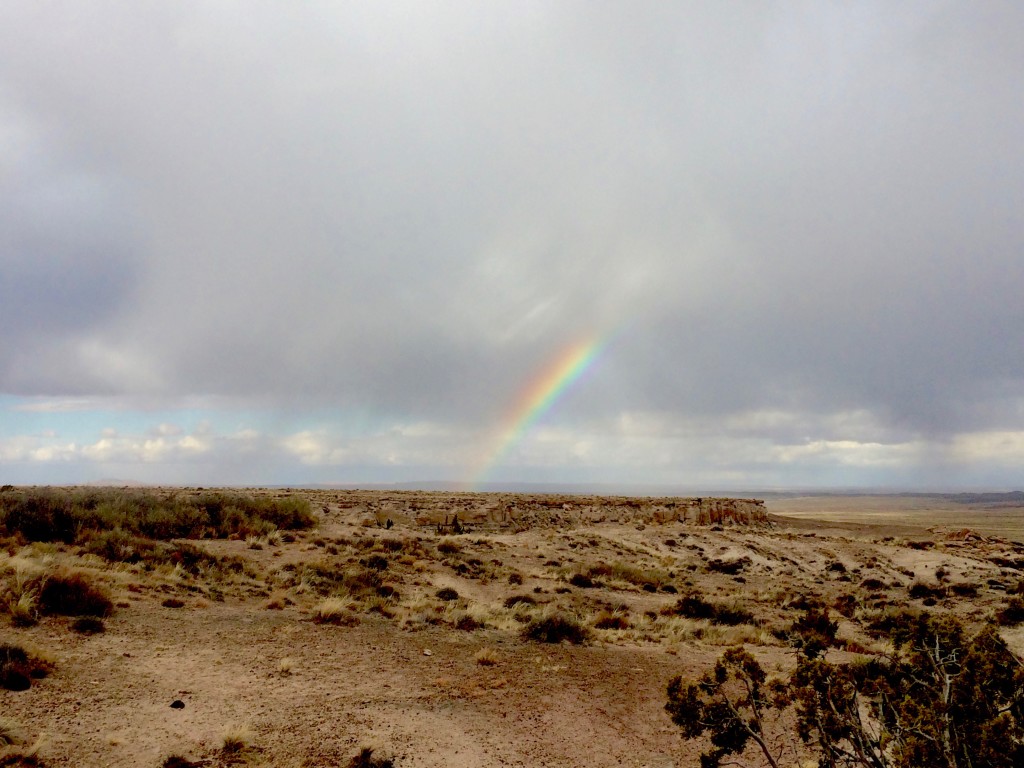 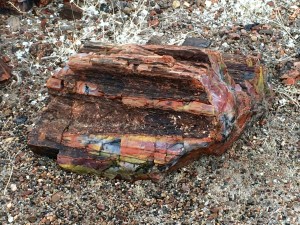 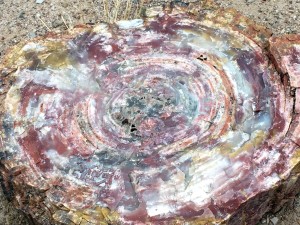 We also went through Winslow, Arizona – and now you have that song stuck in your head too! 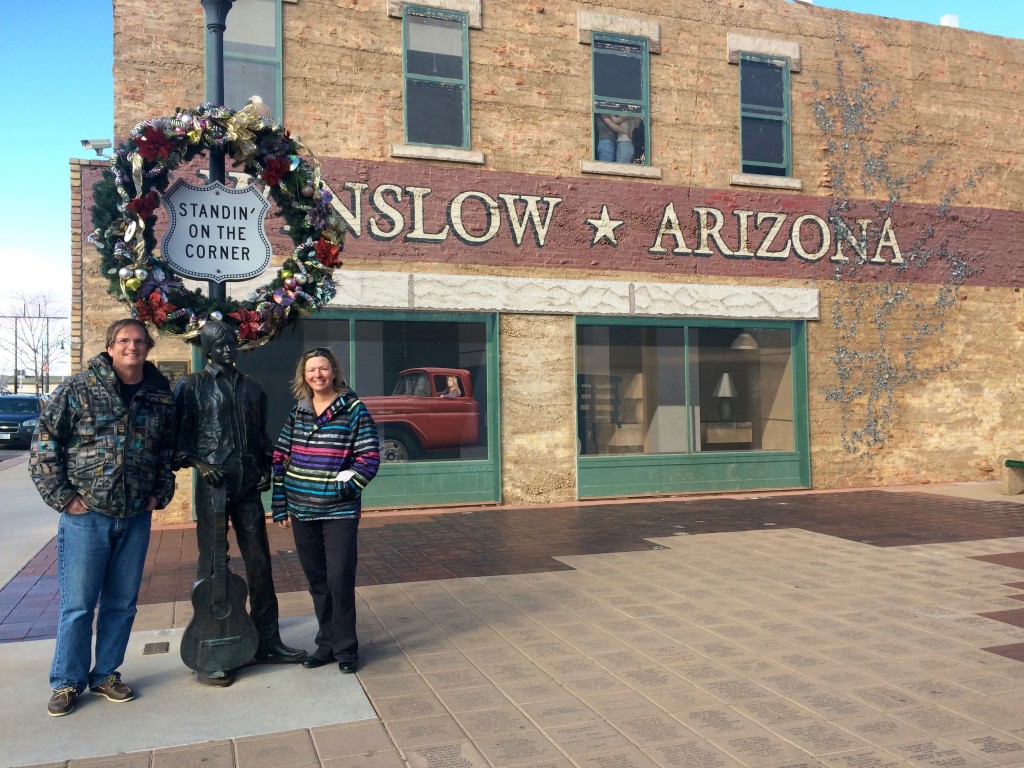 Camp Verde has lots of trails for hiking/biking/off-roading in the area. The town is in a huge valley (The Verde Valley), and the Verde River runs through it. In summer you can kayak and whitewater raft on the river. Several of our neighbors had ATVs. There are also indian ruins everywhere. This is from Montezuma National Monument. 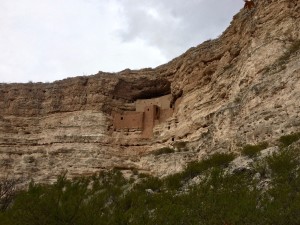 On our way from Yuma to Camp Verde, we stopped by Sue’s corporate headquarters.   Some of the people (including the CEO!) took a tour of Monty and Jeff got a tour of the manufacturing process for the “DOC Bands” that Sue works with.   It was amazing to see the progression from computer image processing, to CNC machining of the head molds to the making of the bands.

Sue met many of the other residents as she helped string the Christmas lights around the park before the annual tree lighting.   Jeff entered the semi-annual “corn hole” competition.   We met 2 other people who play piano and we gathered in one of their rigs for duets with multiple keyboards.

Arizona has been really fun. I hope we’ll be back.

Now we’re off to southern California (again) to wait for Jeff’s daughter Vicky’s ship to pass through on its way to Japan.

One thought on “Camp Verde, AZ”