Our original plans were to head to Park City for a couple of months before continuing north. I guess this is a good time to tell you we are both taking 3 months off from work to drive through Alaska this summer! That’s why Sue has been working full time since last fall as a compensation to her employer. However, due to being assigned a 2.5 month job in Mesa (near Phoenix), we decided to go stay there. Well, it was interesting. More on that later…The drive from Denver to Phoenix took two full days. The first was 480 miles from Fort Garland, CO to Flagstaff, AZ – our longest day drive yet.  Crossing the continental divide is always stressful but beautiful.

As we came down out of the mountains, we started to see random odd land formations – one can only imagine how they were formed.  With Vicky’s reminder ringing in our ear – we just have to Google it!  How *did* they make this trek 200 years ago? 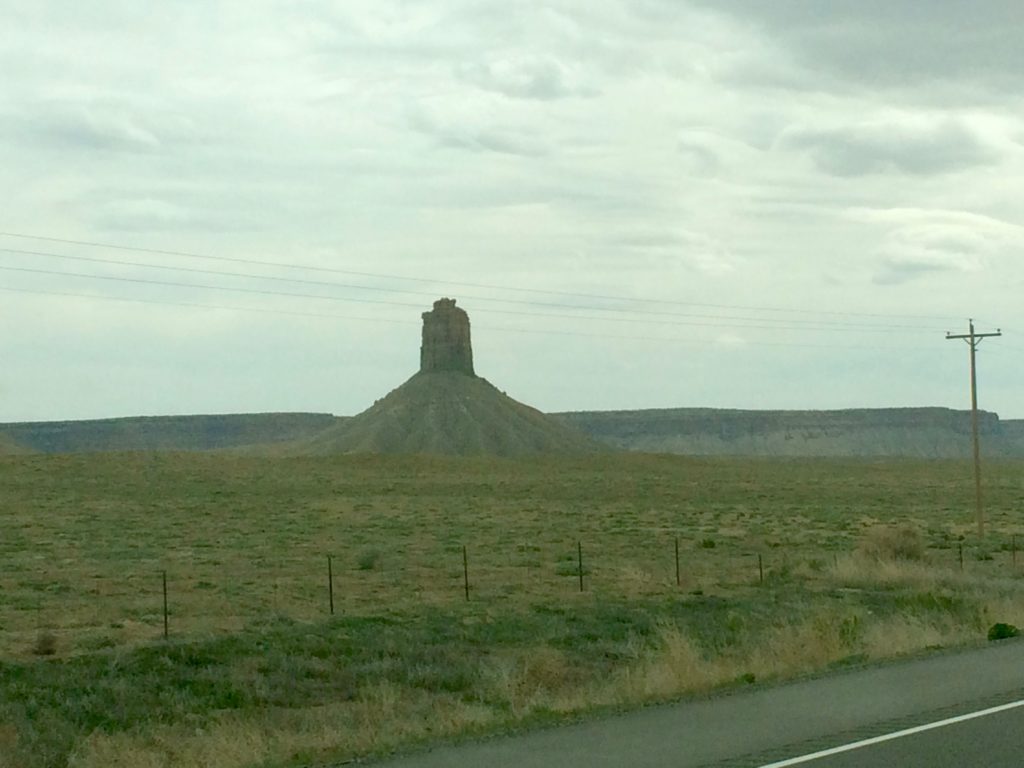 In southern Colorado, as we headed up into the mountains, we actually saw a grey wolf on the hillsides – our first in the wild!  At least we were pretty sure it was..  Jeff’s dashcam was on the fritz, so we didn’t get a picture of it.

We had a fun stop at the 4 corners: cool to be in 4 states at once! 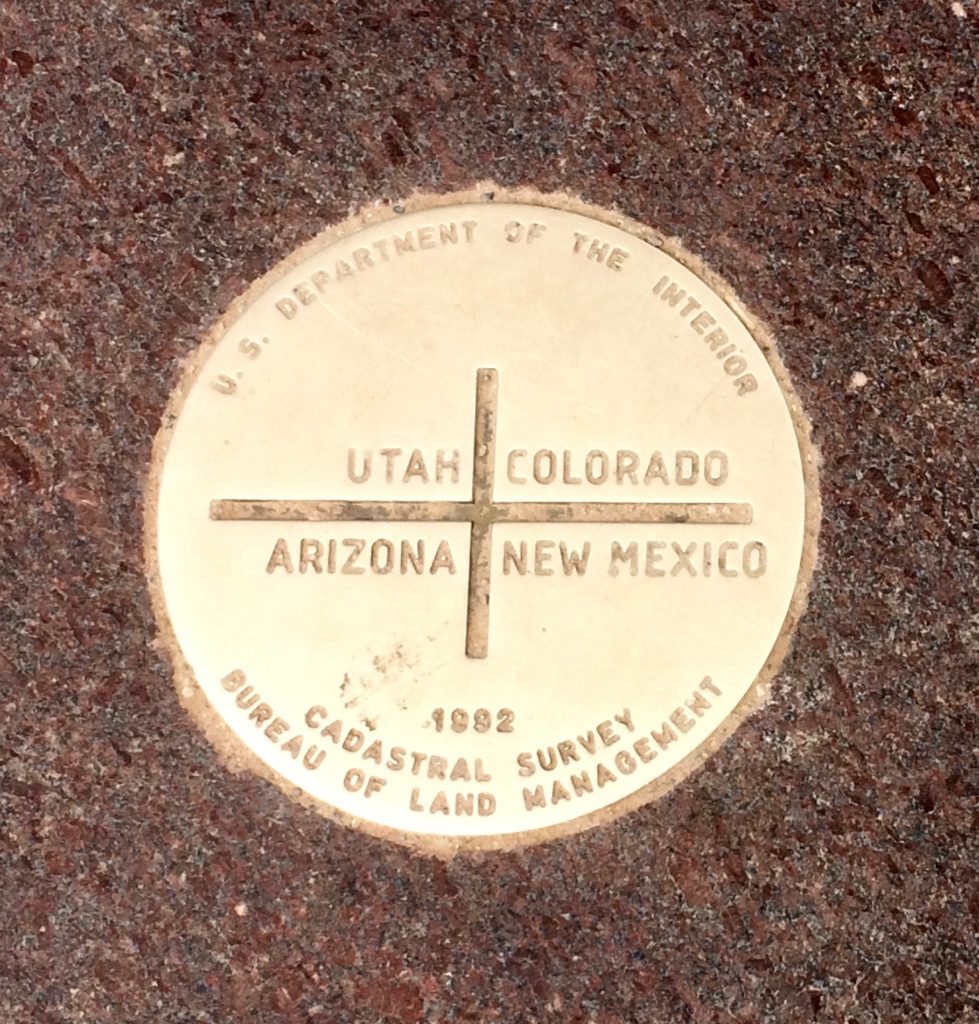 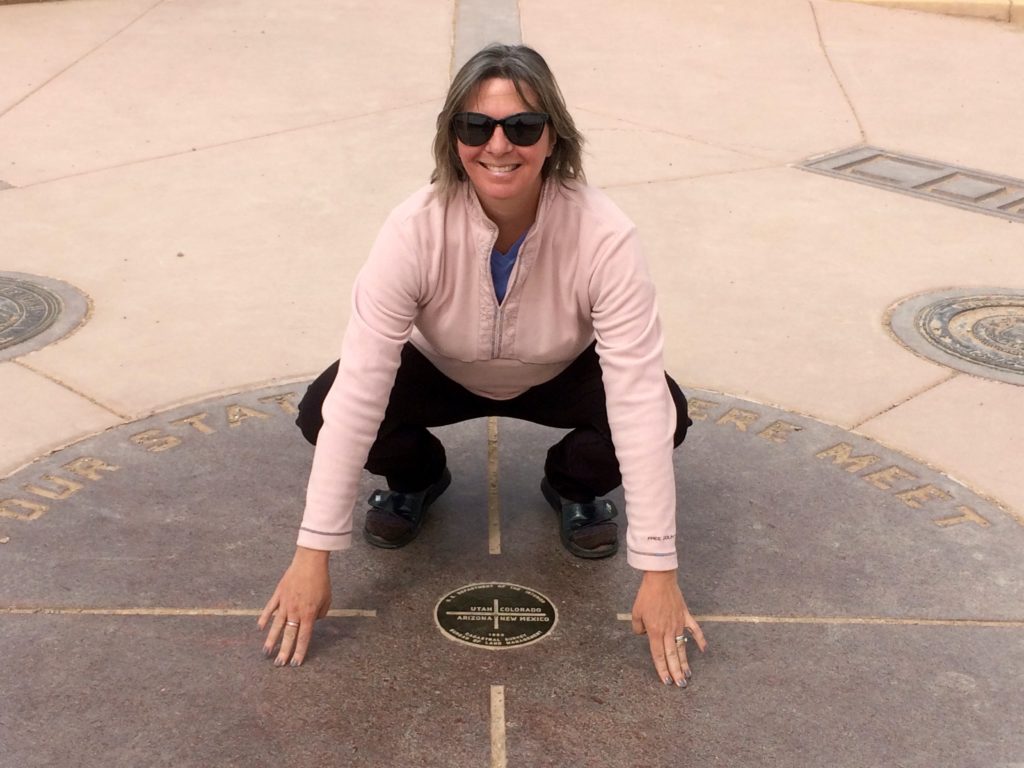 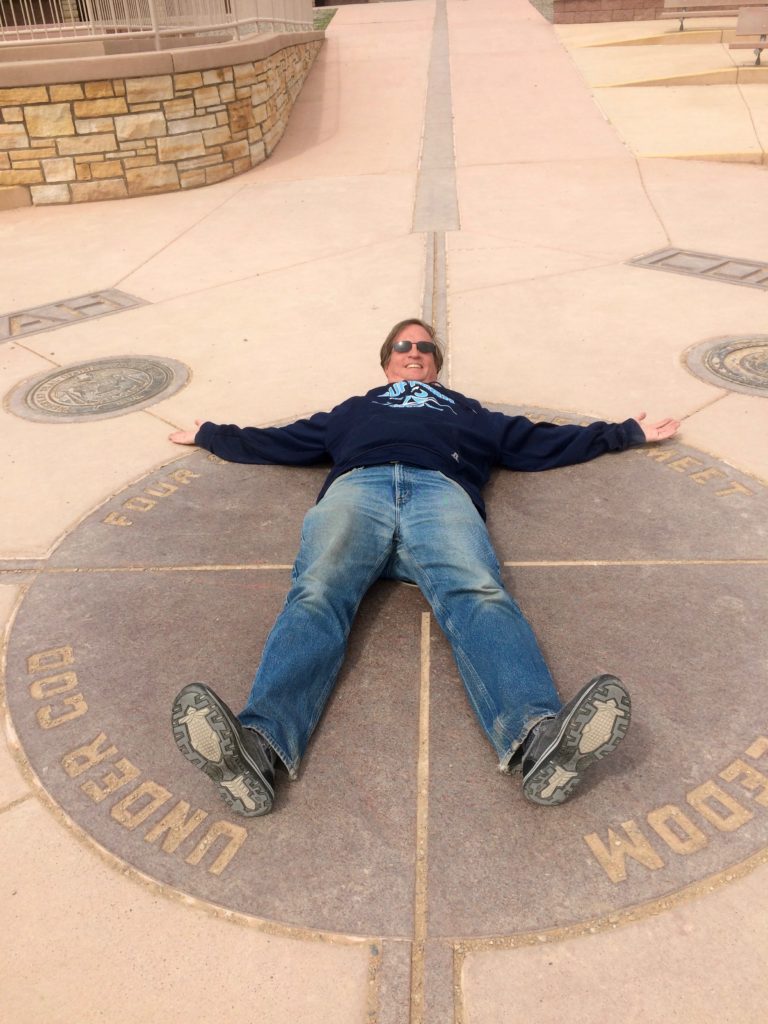 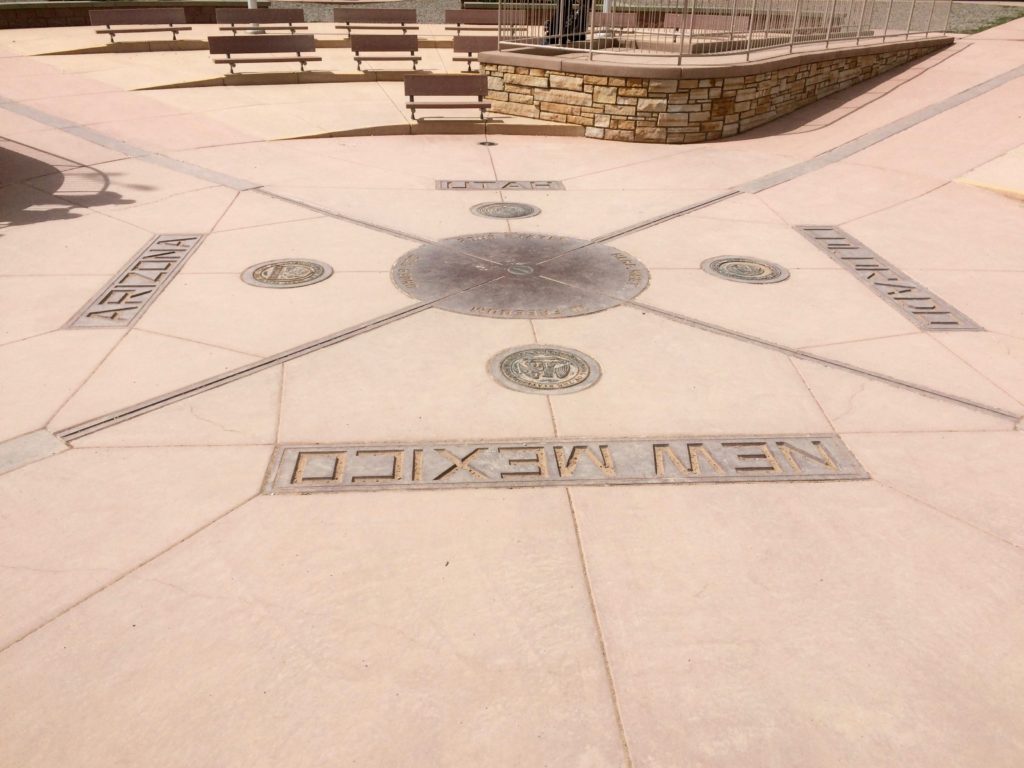 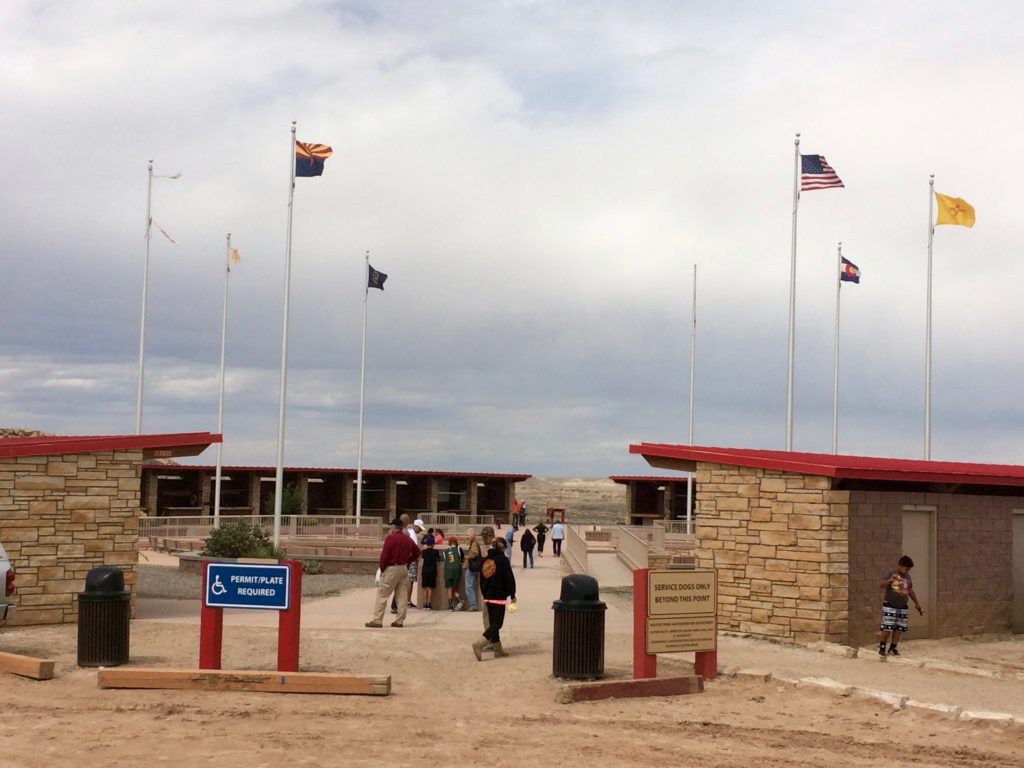 The drive across northern Arizona to Flagstaff was horrible: nothing but extremely windy desert with absolutely nothing there. There were more white knuckles involved with just trying to stay on the road with a high profile vehicle.

We stopped over for a night at a small Flagstaff campground and saw these unusual squirrels with huge ears…they were tough to get on camera! 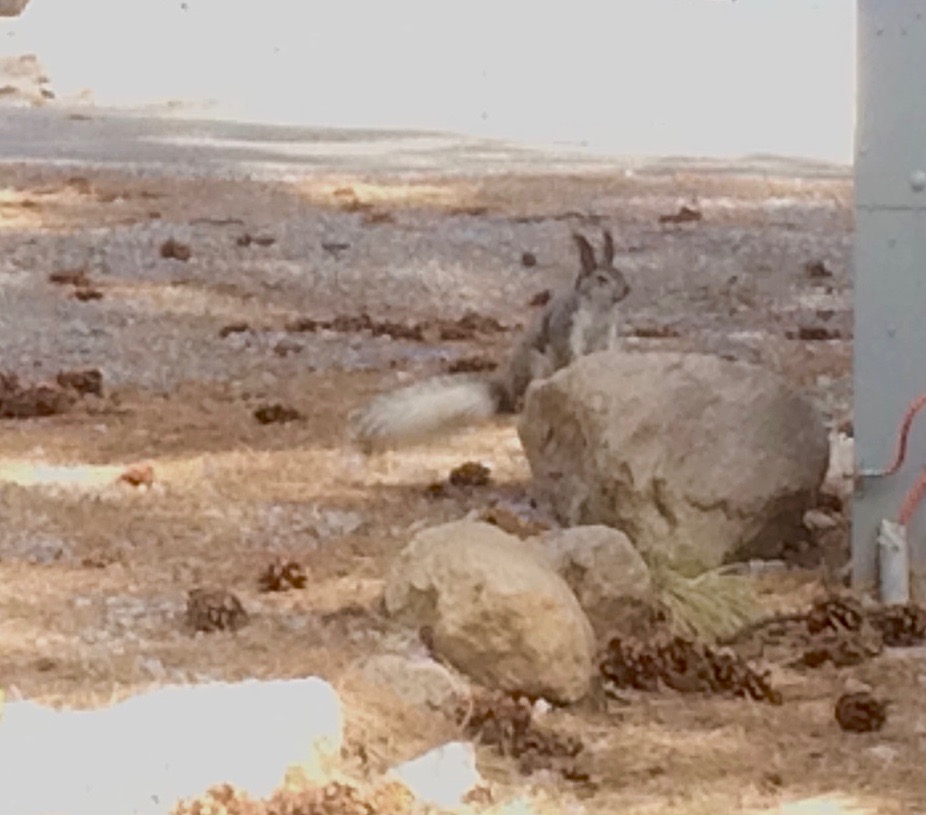 The west side of Mesa borders Tempe, and is pretty tame. When you go east, however, it’s a whole different story.  After several blocks of sad neighborhoods and strip malls, there are RV parks as far as the eye can see. These are primarily for snowbirds from Canada or northern states. As of April 1, they are ghost towns. 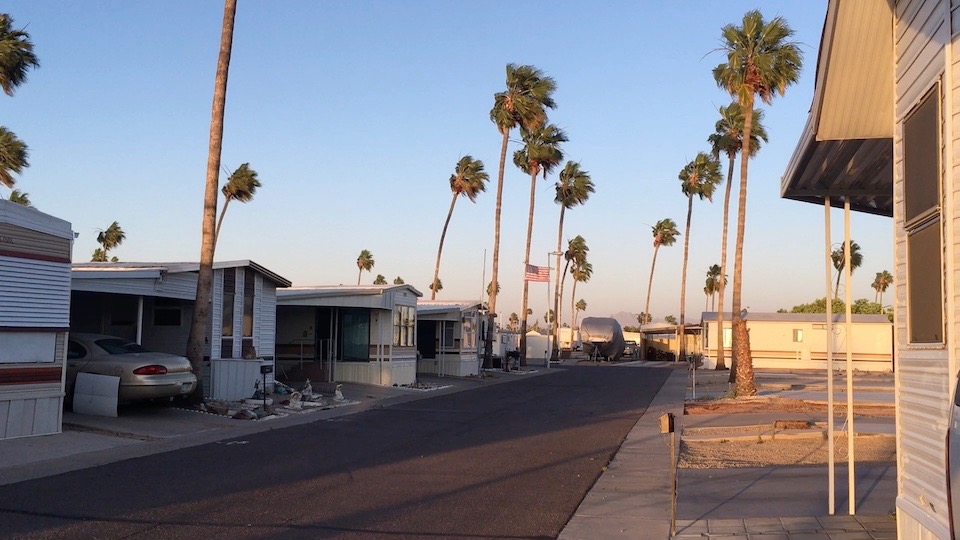 On the plus side, we had all the facilities to ourselves; pools, hot tubs, pool tables, exercise rooms, etc. But once again, we found ourselves in the wrong place during the wrong season. It was hot….really hot. 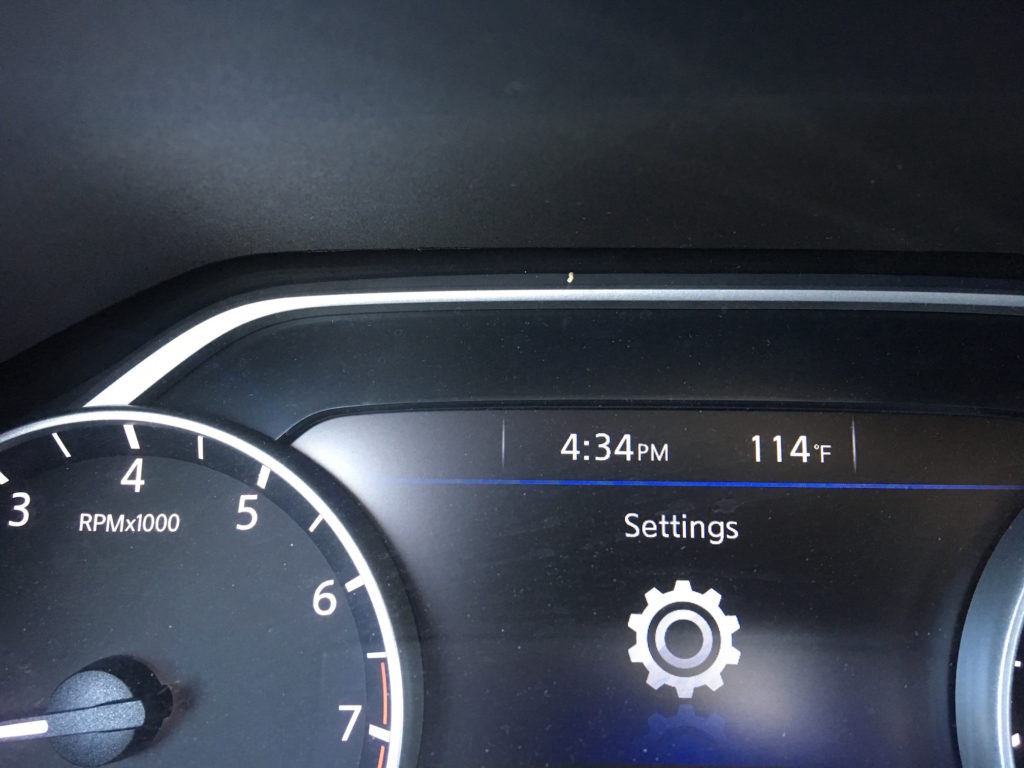 The first weekend that it was predicted to be over 100 degrees, we escaped to Flagstaff. Having skied there last winter, we knew we liked the town.  We took the long way up through Payson – a pretty drive which quickly went from cacti to pine trees as we climbed into the mountains – it was a popular motorcycle route. The afternoon we arrived there was a march for science, which we had great fun participating in. 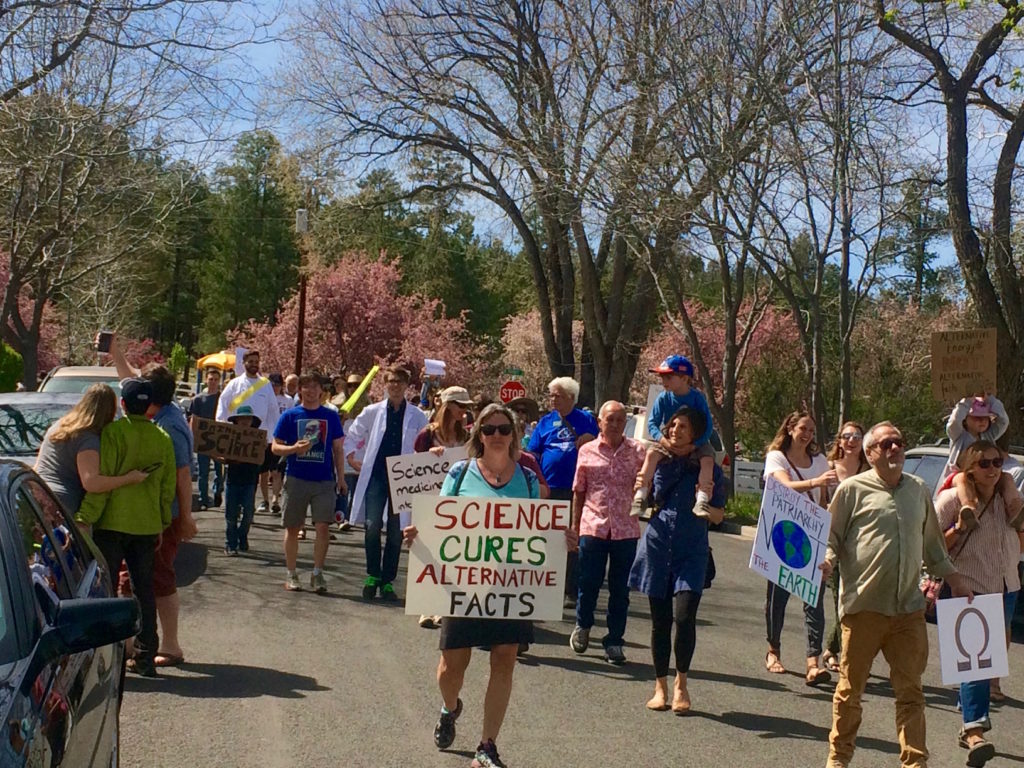 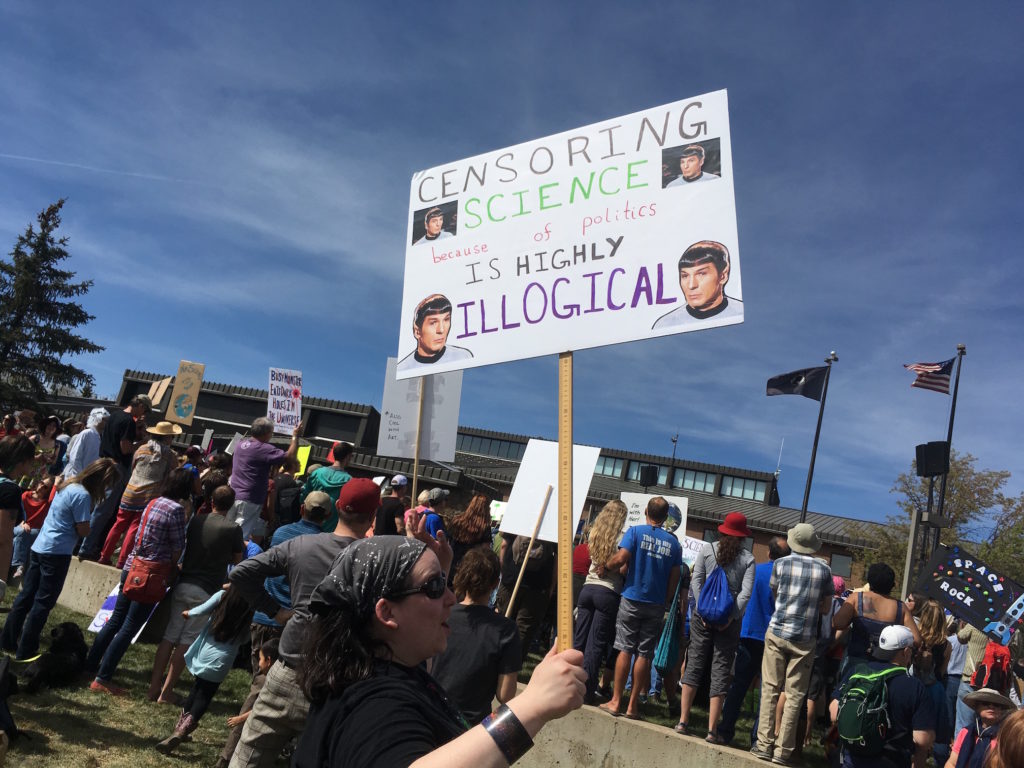 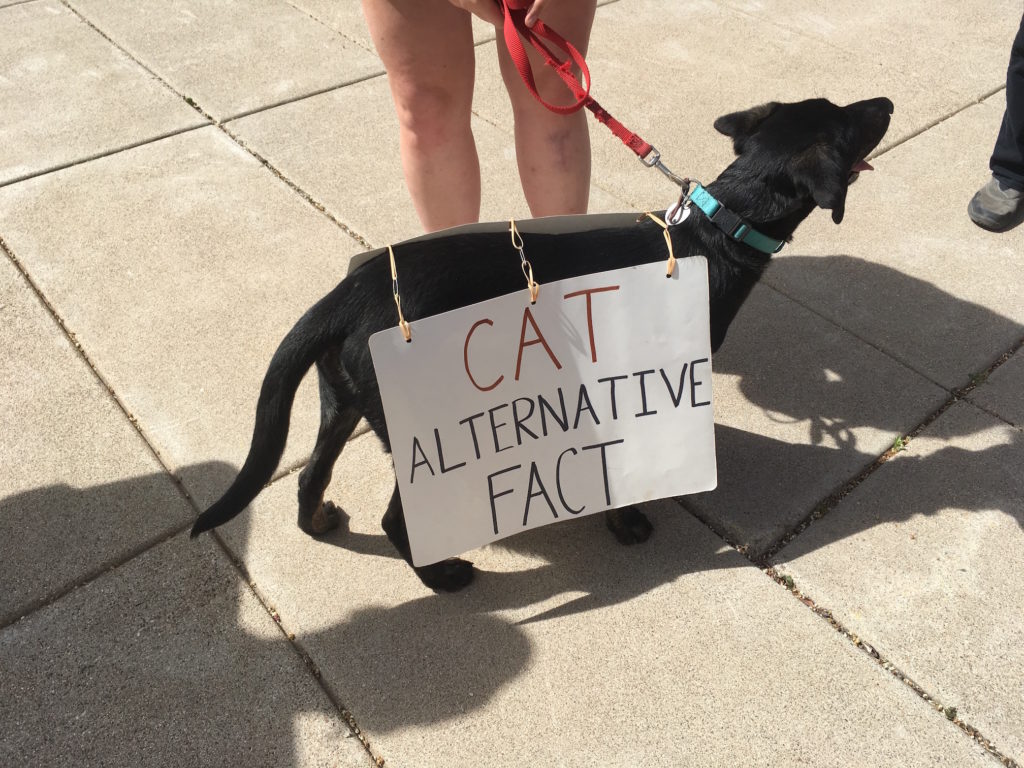 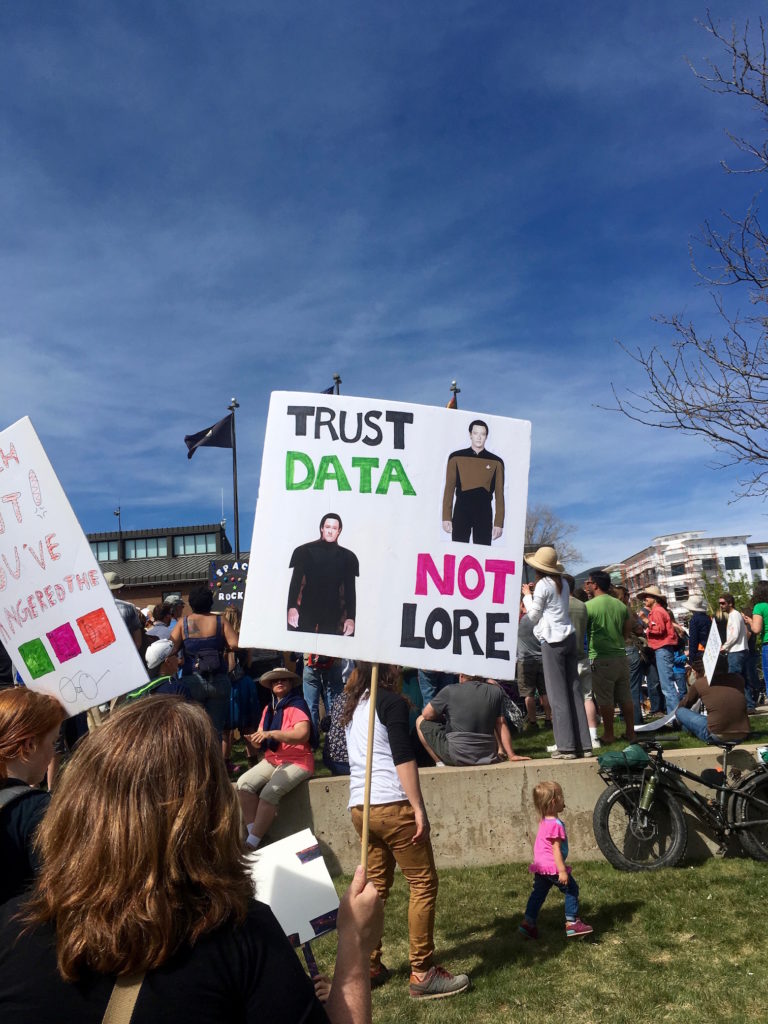 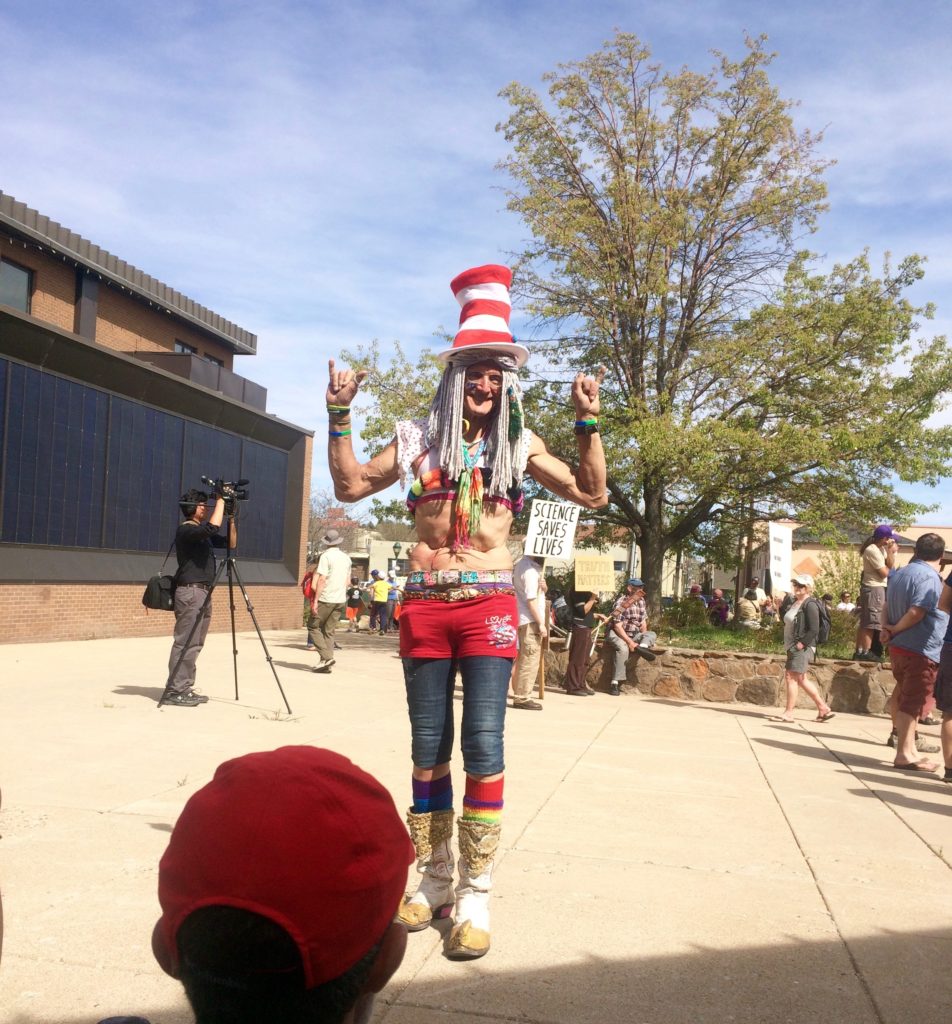 In the evening, we visited the Lowell Observatory and got to see some amazing views through their high powered telescopes. The night was clear and Flagstaff is a ‘low light’ city to allow for the best views.  We saw the colors on Jupiter along with 4 of its shining moons.  We also saw other star clusters..  They really put the distances in perspective – we were looking at the lights from one star cluster – as it looked when the dinosaurs roamed the earth!  It has taken that long for the light to get here! 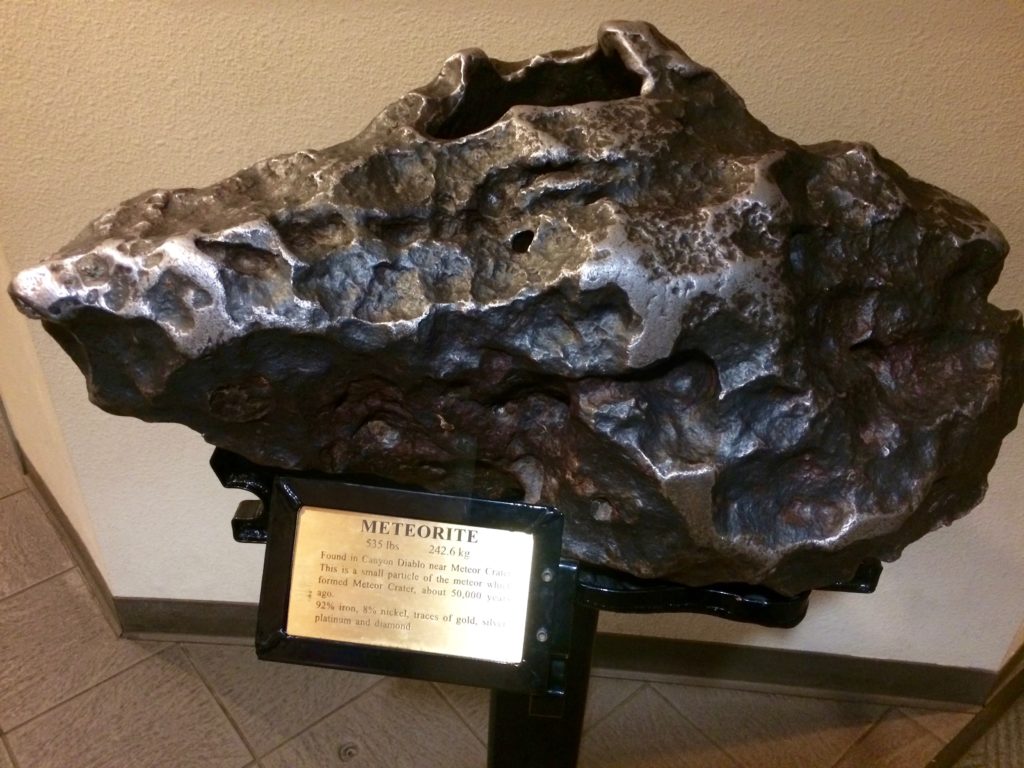 Sunday morning we had breakfast at “Macy’s” – a well-known coffee roaster. They had this awesome roaster that made a quality cup o’ Joe. 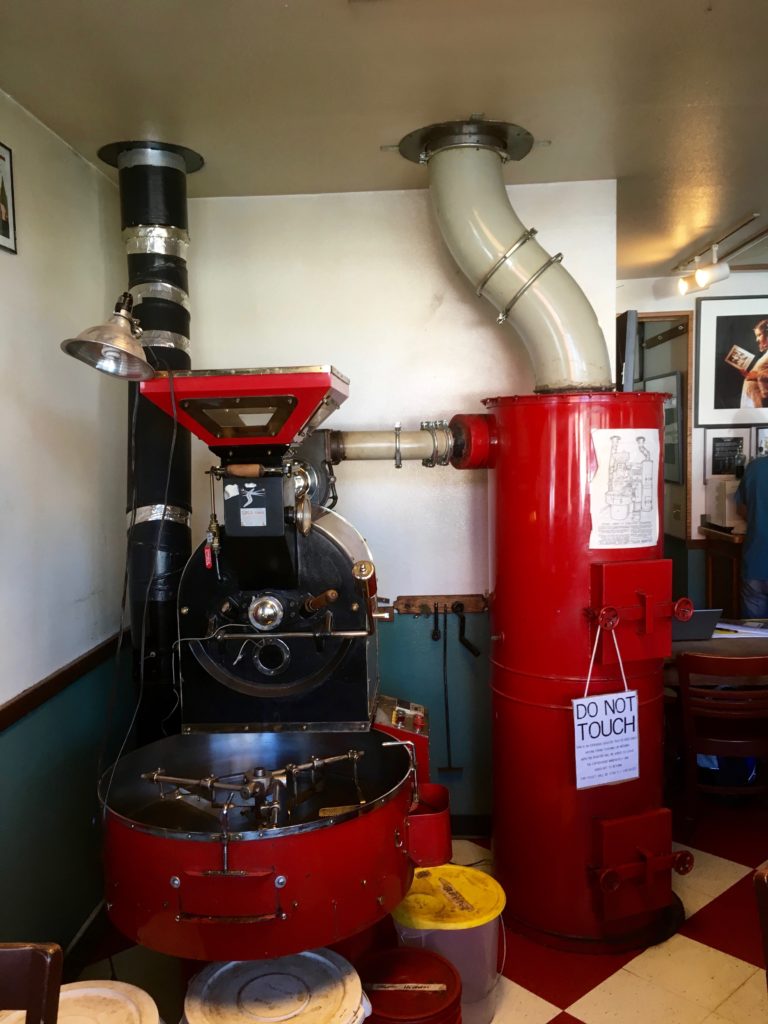 We went for a hike before heading home on Sunday: the weather was temperate but super-windy. The views were nice when the dirt wasn’t blowing in your face. 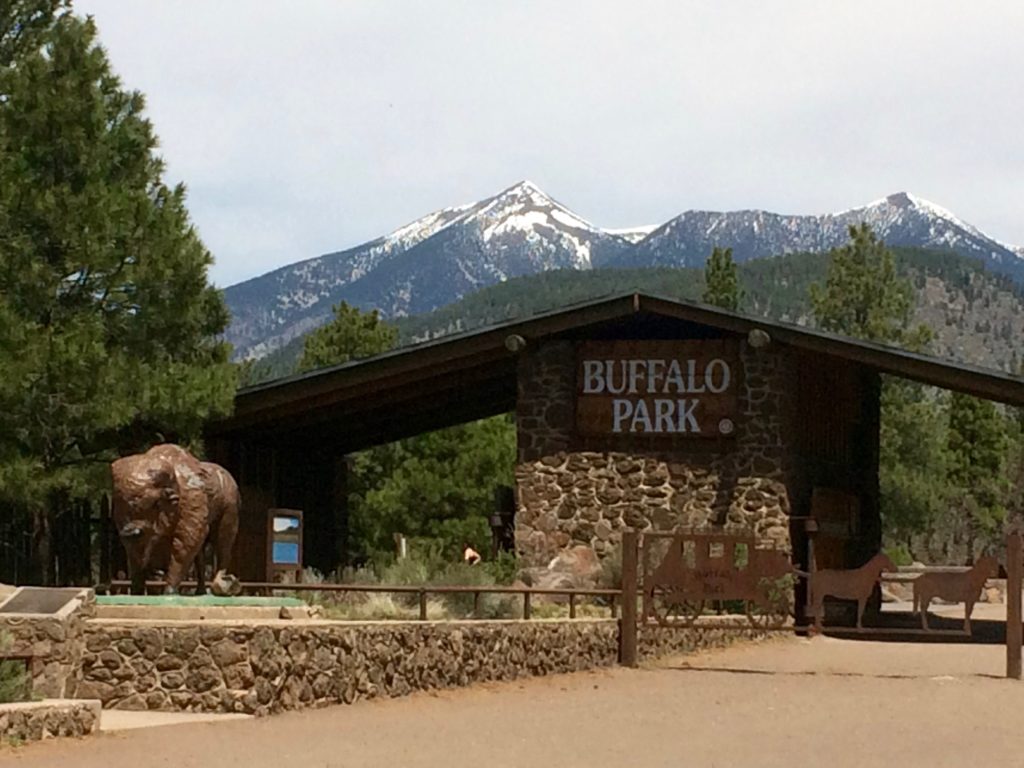 The drive back down to the Phoenix area was beautiful – the desert was blooming with all kinds of flowers. It was cute that they tried to make the cell towers look like palm trees… 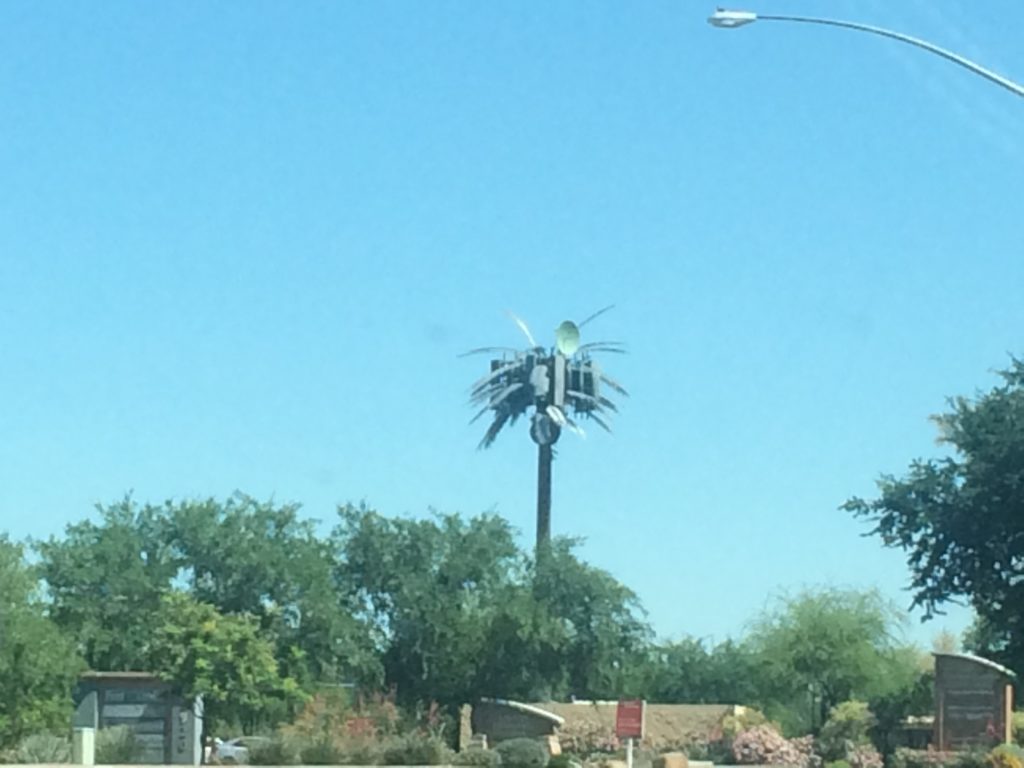 While we were in the Phoenix area, Jeff went on a grandchild-hugging trip to Rhode Island… 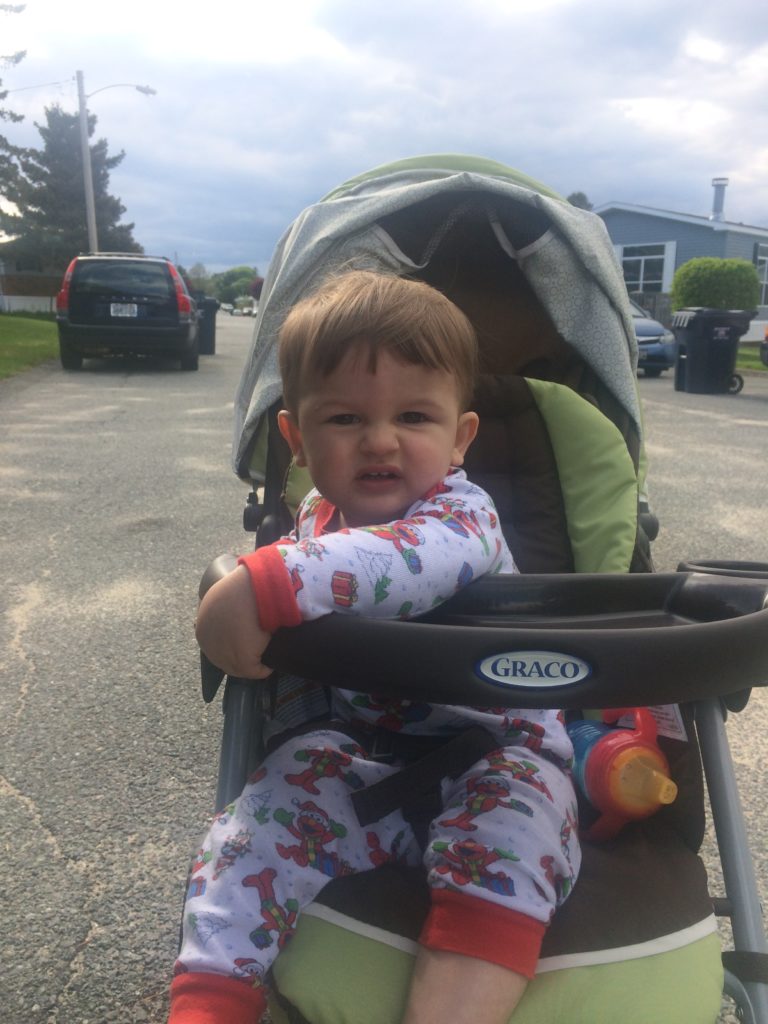 Jeff knew it was time to have the wheel bearing re-packed. When the technician came out to do that, he noticed inconsistent wear on one of our tires and recommended getting the axles aligned. This is something we’ve never done, so we figured it was time. That was a 4 hour procedure we’re hoping saves us some future tires.  Amazingly, the way they do it is that they *bend* the axles!! 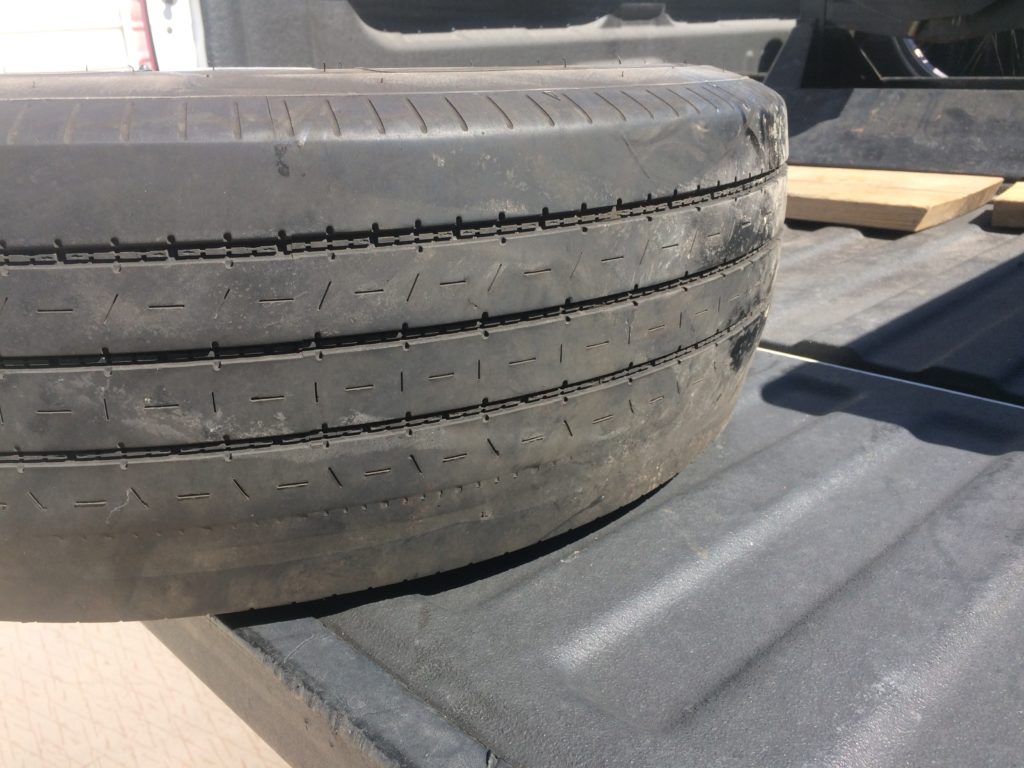 Finally, Pinterest is a dangerous thing. I’ve removed some valances from the RV and put up some curtains. And then I saw that people had ripped out the horrible vinyl and carpet that the rigs come with and put in beautiful vinyl wood-like flooring. After much discussion, Jeff agreed to this (grudgingly, as he will need to be a big help) and we ordered 8 boxes from Home Depot. When they arrived, they were about #40 per box! We simply cannot add #350 of weight to our already loaded rig, so those plans went down the drain. Thank you, Home Depot, for being so good about returns even with a special order.

Now we’re off to Park city for 2 weeks, then back up to Great Falls, Montana before jumping the border to Canada and on to Alaska!