We are heading west! After traveling down the east coast of Florida and up the west coast, we stopped in Pensacola for 2 weeks so I could renew my motorcycle license before leaving the state (we are technically Florida residents). Jeff was surprised we were already west of Ohio and in Central Time!

The Basic Rider Course was awesome. Jeff decided to join me since he hasn’t ridden much in the past 30 years either. My motorcycle designation magically disappeared when I got a California license way back in the 80s. Over the two-day course, we spent about 8 hours on the bikes, practicing increasingly difficult skills such as: how slow can you go without putting your feet down; tight U- and slow speed turns; slamming on the brakes at 20 MPH; driving over an obstacle (standing up); and swerving to avoid something in 2nd gear. 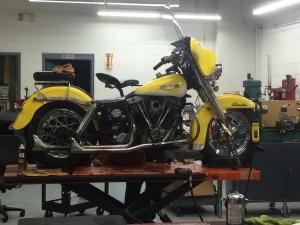 The instructors were fun and thorough, and there were only 6 of us in the class so we got lots of attention. We also got a back room tour of the Harley dealership. It’s possible we may look at getting some kind of small bike or scooter to be an alternative to the truck for driving around town(s).

We stayed at an even smaller RV park northeast of Pensacola. The park was not far from I-10 so there was some traffic noise. But the weather was in the 60s during the day and 30s at night so we had the windows closed again.  Like several of the Navy towns we’ve stayed in, military cutbacks have seriously impacted the area. There were miles of closed -down businesses, pawn shops, and donation centers like Goodwill. Being in the “bible belt”, there were also LOTS of churches.

There was a kayak launch right in the RV park onto an inlet off Escambia Bay. I went out one day and turned in the wrong direction, finding myself in an ever-narrowing  shallow stream filled with jumping Mullets! Creepy! Thankfully, I saw no alligators, though someone on shore was surprised to hear that when I got back. The other direction led out to the bay, but after a fish almost LANDED IN MY KAYAK I turned around just before the bay. I know, I’m a wimp. I like to watch the wildlife, not really get up close and personal with it.

Most of the people there were retired, and either parked for the winter or stopping through for one or two nights. There were some back roads we ran on to try to get in shape for snowboarding.  Jeff saw a bald eagle and a golden eagle on one of his runs. I just heard all kinds of things tearing off into the woods as I went by.

We also spent some time trying out my new slack line but have to laugh at the Youtube guy who said not to try walking on it until you can balance in one place for a 100 count. Ha! We were lucky to count to 10…counting faster as we went down.

We visited the National Naval Aviation Museum.  They had a very impressive display of aircraft and, during the summer,  you can watch the Blue Angles practice.   The bravery and heroism of our troops over the years is both hard to comprehend and awe-inspiring.  Our hope is that Richard and Vicky are never put in a position where they have to do such things; but at the same time we are proud of them for their bravery in volunteering to serve our country.

There was a decent 20 mile rail to trail ride that led out to yet another Naval Air Station.    It is interesting how we keep managing to end up near military installations.

We also drove through the beach areas of Pensacola.  Beautiful, long stretches of beaches with some funky houses (mostly on stilts).   And downtown areas that are amazingly similar to Bar Harbor, Virginia Beach, Jacksonville Beach and Weirs Beach!

And now, off to the Big Easy!