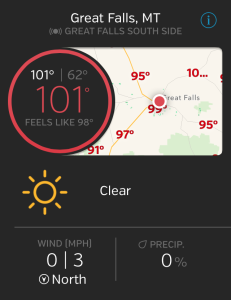 From Ennis, we traveled up to Great Falls. Since Sue has to fly to work we needed to be close to an airport, and that location also put us halfway to Glacier National Park – our next fun destination.

Great Falls couldn’t be more different from Bozeman or Ennis. It’s a tired, old industrial and military town on the Missouri River. The climate is very dry and while we were there, we experienced record-breaking heat. The best thing about Great Falls is the recreation trail that goes for miles on both sides of the river. It was fun to bike along this trail even though the only thing to see was the brown water and industry like an oil refinery, con-agra plant, General Mills foods, etc. 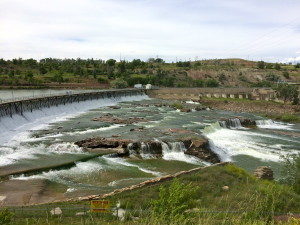 Great Falls’ claim to fame is that, due to a series of 3 waterfalls along the Missouri, it almost stopped Louis and Clark’s westward expedition.  All of these falls have now been turned into hydro-electric dams, giving the town the nickname “Electric City”.  The signs for the Louis and Clark trail show the explorers pointing forward into the distance.  I couldn’t help but think the caption should have been, “Look, another dam waterfall!” (pun intended) They had to portage their boats and all of their gear 18 miles on land to get past the falls.

The coolest thing was that we got a hint of what an aurora looks like.   Since it is light until after 10pm, we made a late night trek out to a deserted road.   While we did not see bright colors, there was white/very light green silk flowing in the skies above us.  In addition to the constant flashes, there was a fan of light spreading up from the horizon in straight lines – really cool to see!  Not bright enough for pictures though.. 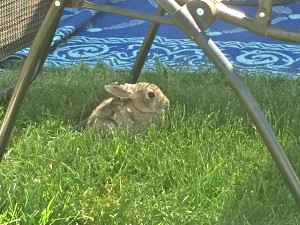 We stayed in a slightly sketchy RV park (there were only two to choose from and this one was the more recommended). There were a couple of bunnies who were obviously comfortable around people who hung out around our trailer, lounging in the shade. It was also an easy bike ride to the river trail.  Although the park is bordered by a train track and a highway, it was much quieter than where we stayed in Bozeman. 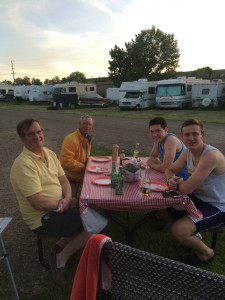 Our first night there, we saw a crew trailer parked across from us.  Naturally, Jeff couldn’t resist talking to them.   It was 2 friends from Cleveland that were delivering a trailer to the Canadian boarder.   We also met Timothy, a cross-country road biker.   He has pedaled across the country numerous times.  This summer, he was following Lewis and Clark’s path to the Pacific.  We cooked burgers and dogs for them and enjoyed random stories from everyone. 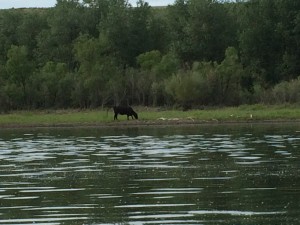 We did get out one day after work for a little kayaking on the Missouri River.   It was a relatively calm portion of it so we were able to paddle upstream then float back down to our parking area.    Not the most scenic kayaking!  There was a castle built along the river that was impressive, if not very out of place.  It even had its own airstrip.   On the other side was a large ranch with lots of cattle.    All picturesque until he relieved himself into the river..  Time to pack it in! 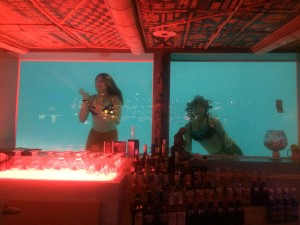 The other unique spot was the Sip and Dip lounge.   It is a tiki bar in an older 2 story motel downtown.  Their signature drink is the “Fishbowl” – much like a scorpion bowl…  But the main entertainment was behind the bar  – a large window into the motel’s swimming pool.  Each night they have a couple of women dressed in mermaid outfits swimming in the pool and waving/smiling at the customers in the bar.   (Apparently some of you saw this post on Facebook and thought it was a strip club – no – they just swam around)

The prettiest thing in town was Giant Springs State Park which is on the edge of the Missouri.  Here there are a number of fresh water springs bubbling out of the ground (150,000 gallons/day)  with crystal clear water.   The springs form a small pond where a school of large trout get to live.   The water then flows down the Roe River into the Missouri River.  It is listed as the worlds shortest river with a length of just 201 feet, flowing into the longest river in the US!  They also have a trout hatchery with millions of fish getting ready to be released all over the state.

And now, off to Glacier National Park!