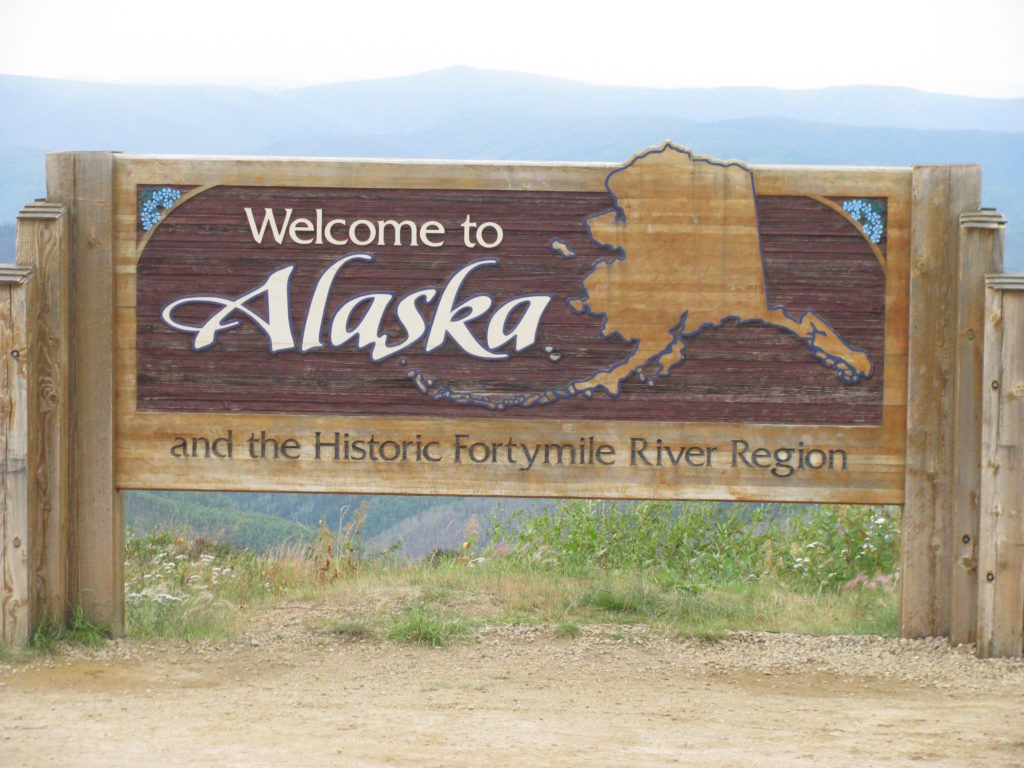 To get out of Dawson City toward Alaska, you have to take a small ferry across the Yukon River.   This puts you on the start of the “Top of the World” Highway.  Coincidently, the John and John canoe team that we had dinner with the previous night rode the same ferry with us! 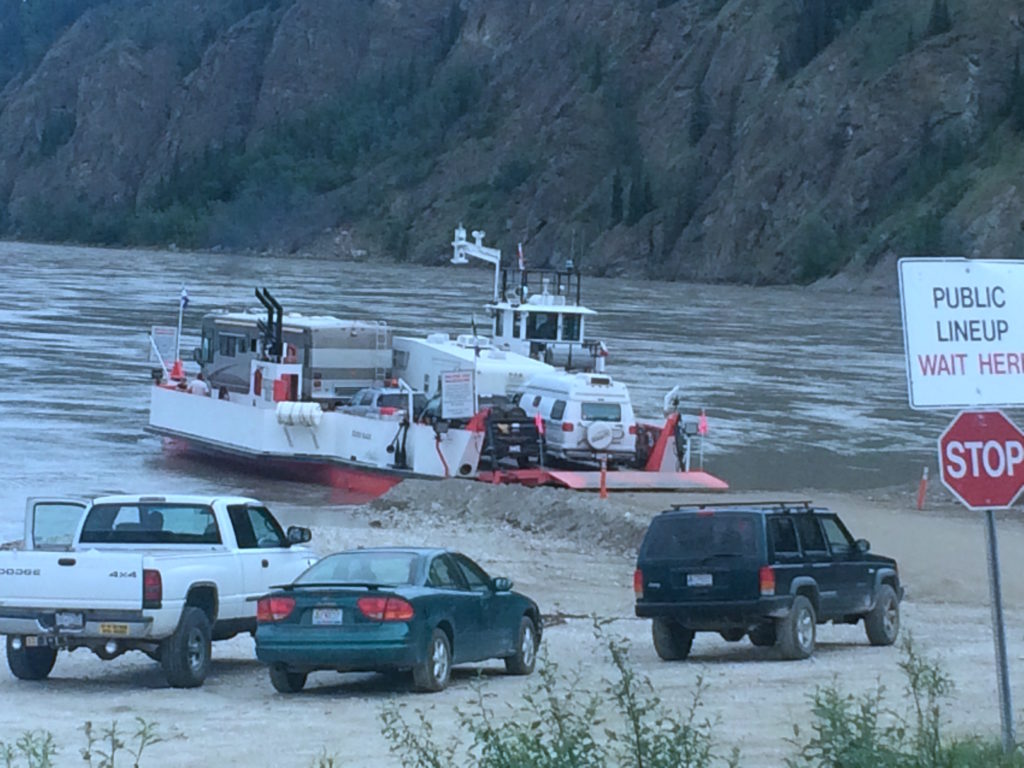 The ferry can only hold 2 rows of vehicles, and when you put a full size RV or two, there isn’t much room for anyone else!   The ramps are simply dirt that they have compacted depending on how high the river is running.  It was a pretty exciting time loading/unloading but the workers are helpful and watchful.  The ferry ride is only about 5 minutes but you can really see the effects of the current!

Within a few miles of the ferry, the road turns to dirt.   Somehow Canada knows how to maintain dirt roads.  We later found out that Alaska doesn’t!

The ferry naturally spreads out the traffic, so the few people behind us quickly passed us and we found ourselves all alone, climbing through the alpine mountains.  Surprisingly not much in the way of wildlife, but the views were spectacular.  Pictures don’t do it justice. 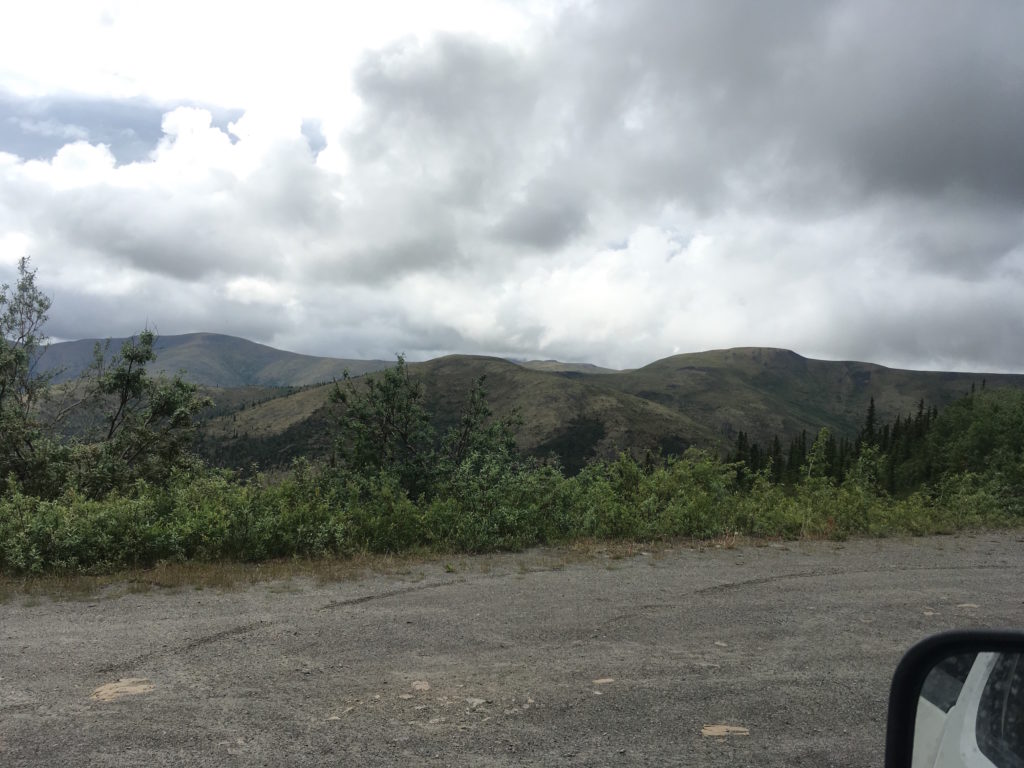 A Facebook page we have been following talked about all kinds of horror stories that people were having at various border crossings.  We arrived at the border ready to answer questions, declare alcohol, etc.  They looked at our passports, asked 2-3 questions and sent us on our way.  Hopefully all of our future crossings will be that easy!

Strangely, for the first 15 miles or so in Alaska, the road was freshly paved and a wonderful drive.  Then it turned to dirt.  Then it got worse.

As we approached the town of “Chicken” where major construction was happening, the roads became pretty horrible.  We were having to travel down the opposite lane to avoid some parts.

After Chicken was more dirt road, then eventually we got back to paved road.  But this was in such rough shape that you could hardly tell.  The frost heaves were not nasty little bumps like in NH. They were deep ‘V’s spaced so that it felt like riding a horse. After the truck’s back wheels went over the dip the trailer would start bouncing, yanking us all over the place. A very long day – only 185 miles, but it took well over 8 hours!  The road finally joins back up with the Alaska Highway just before Tok. 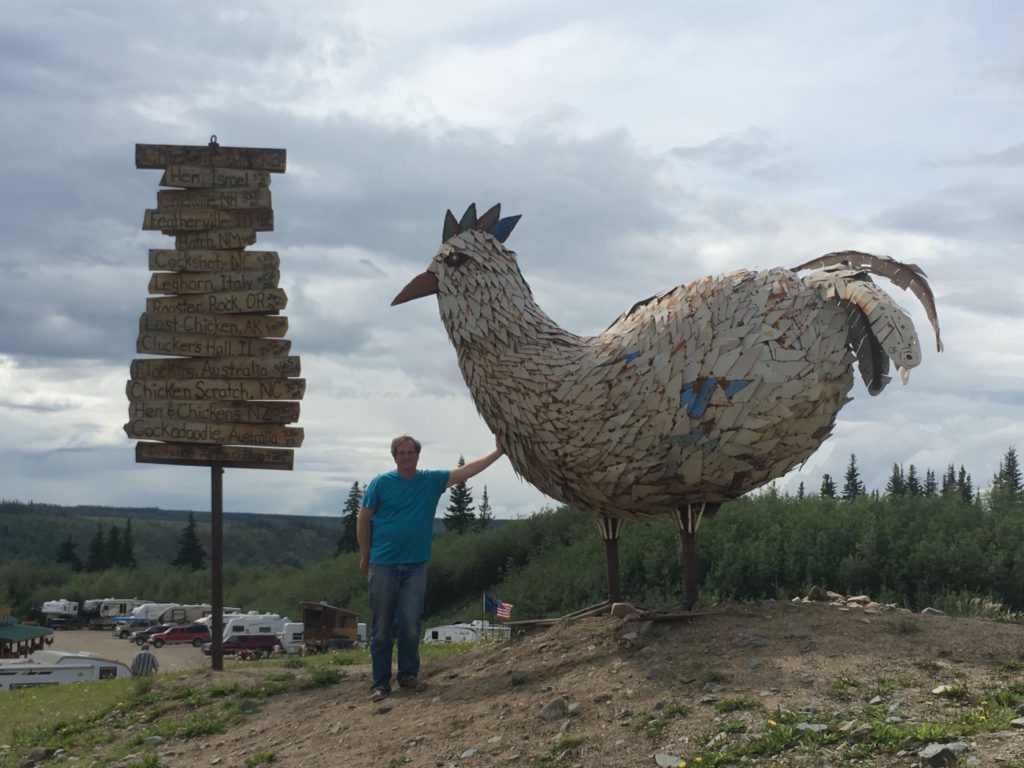 Chicken is another gold rush “town”.  They have a big dredge on display, have 1 RV park with a store, and “downtown” consisted of an eatery, saloon and general store.  And that is it!   They do have a yearly music festival that is apparently well attended.   The town was supposed to be named after the Alaska state bird, the Ptarmigan, but too many people had problems spelling it.

We spent the night in Tok so Jeff could pick up a package now that we are back in the US.   Tok is the first significant town on the Alaska Highway in Alaska.  But it is really just a junction with a few RV parks, gas stations and grocery stores.

By lunch time we were in Delta Junction.  This is the end of the Alaska Highway – it links to a road which had previously existed from Anchorage to Fairbanks. 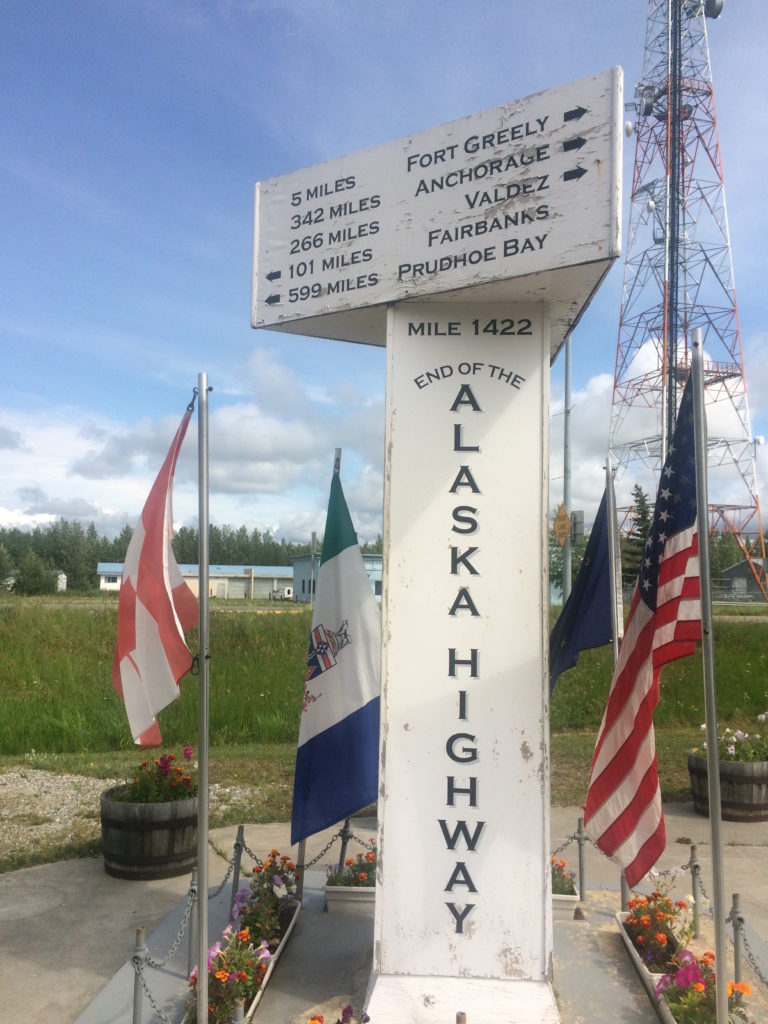 Fairbanks is a small industrial city which hosts the University.  Surprisingly, the 4th of July activities are pretty limited (too light for fireworks!).  One of our main goals was to visit an old Loon patrol friend that had moved up here 20 years ago.  He has a sled dog farm with 36 Siberian Huskies.  His very first litter of puppies were born at our old ski house in NH.   It was a beautiful day and we sat outside with beers catching up with Mike and his wife Sue.  We have a video that captures them all howling.  It was amazing, Sue and Mike could get up and walk around and the dogs slept quietly; but if we got up they all jumped up on high alert. 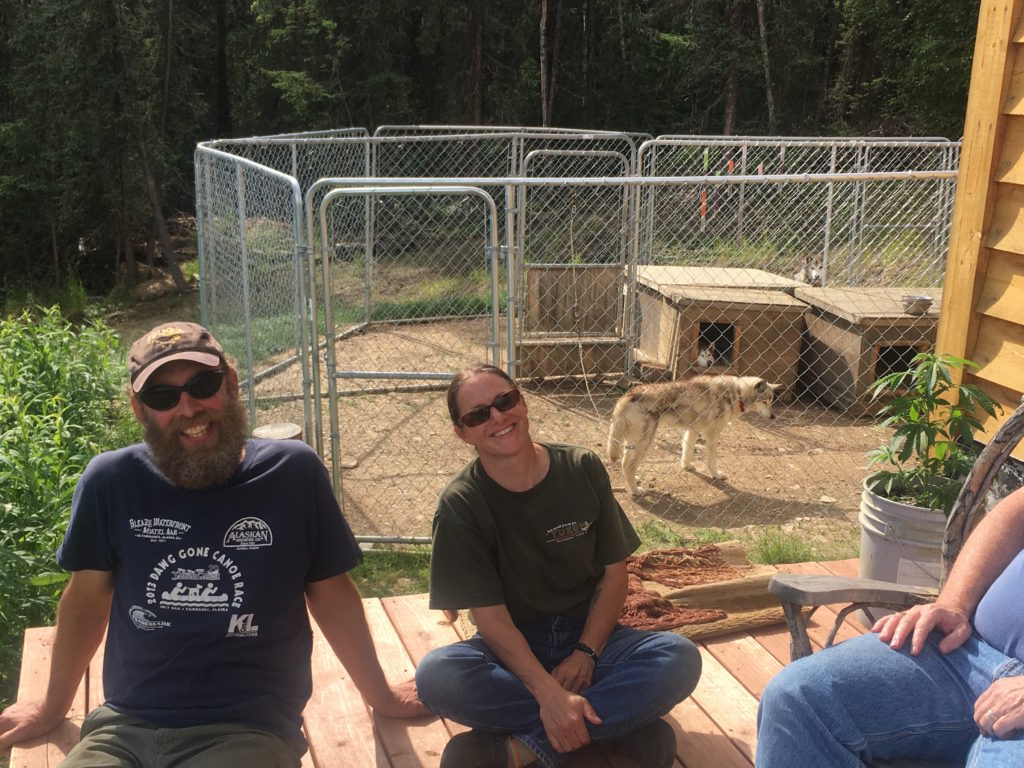 The campground we were staying at was convenient for our visit, but was a little strange. Nice owners, but not super well kept.  And their water had a ton of iron so we had red water for many days after.   The Alaska Pipeline goes through the area.  The oil is approximately 100 degrees all the time so there are all sorts of engineering feats to deal with the heat.  And the whole 800 miles was built in 2 years – another amazing feat. 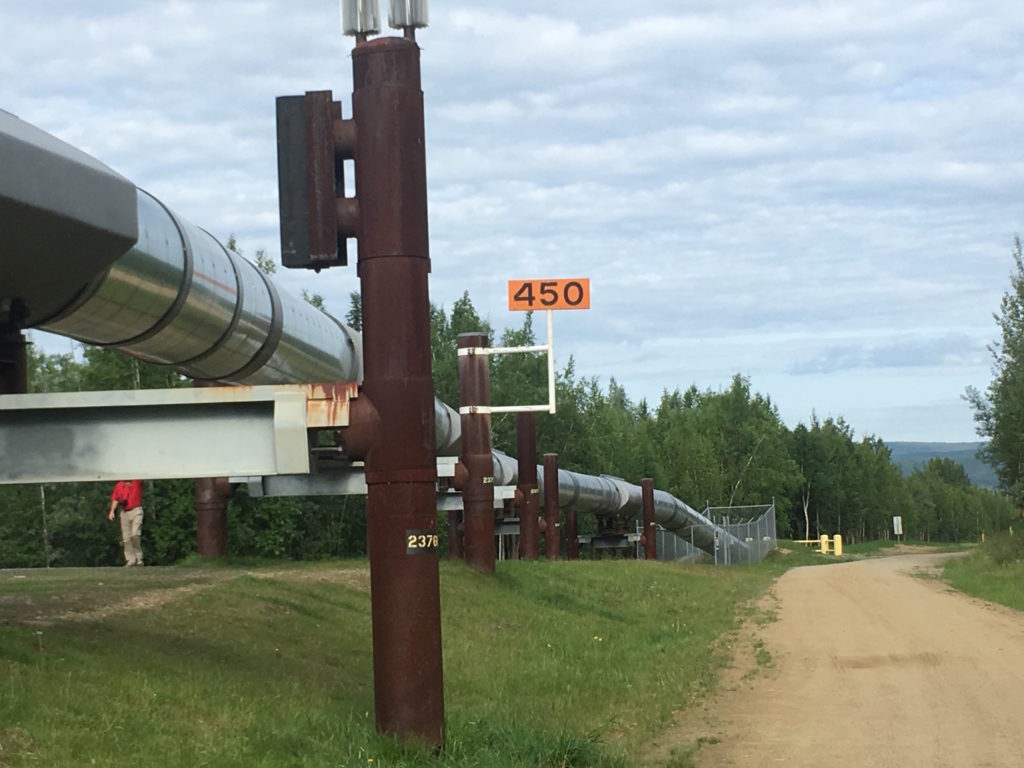 Now off to Denali!

One thought on “Top of The World – Alaska”