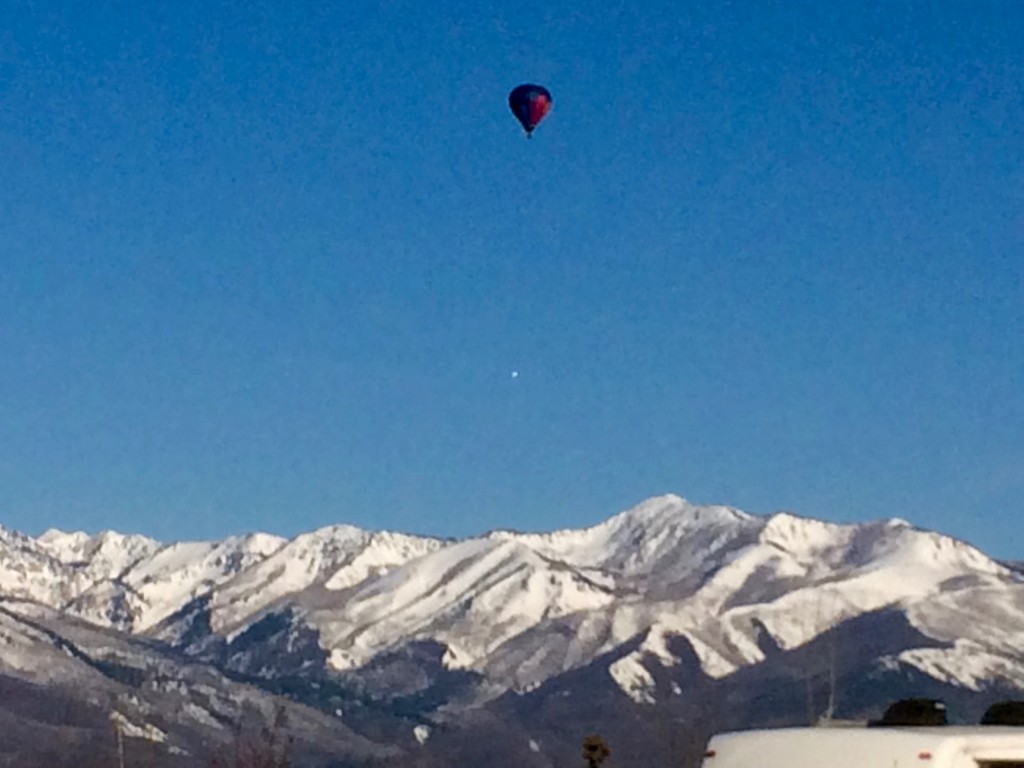 Looking to hit some spring skiing in Utah, we found Mountain Valley RV Resort in Heber City: about 1/2 hour from Park City. It was one of the nicest parks we’ve stayed at: new, clean and friendly. It had a large clubhouse boasting a huge family room with stone fireplace and big screen tv, a workout room and game room, including ping pong! Outside were courts for basketball and pickleball as well as a nice hot tub. The view from the park was gorgeous.

March is a transitional time in that part of Utah: sometimes winter and sometimes spring. Sue got to try out the Olympic Cross Country Ski Center only because they make their own snow. It was not a huge snow year in the Park City Area, so most of it was only at higher elevations. This allowed for some bike riding in the Heber Valley where, for most of the days, it was in the high 60s with bright sunshine.

In the middle of our stay, Sue’s two children, Jay and Julia both came to visit! We skied/snowboarded ourselves silly and enjoyed the surrounding sights. We walked around Park City, which is a hip and well-heeled town full of eateries and art galleries.

We went to the olympic training center and saw the ski jumping team’s practice pools, the bobsled run and a ski museum. 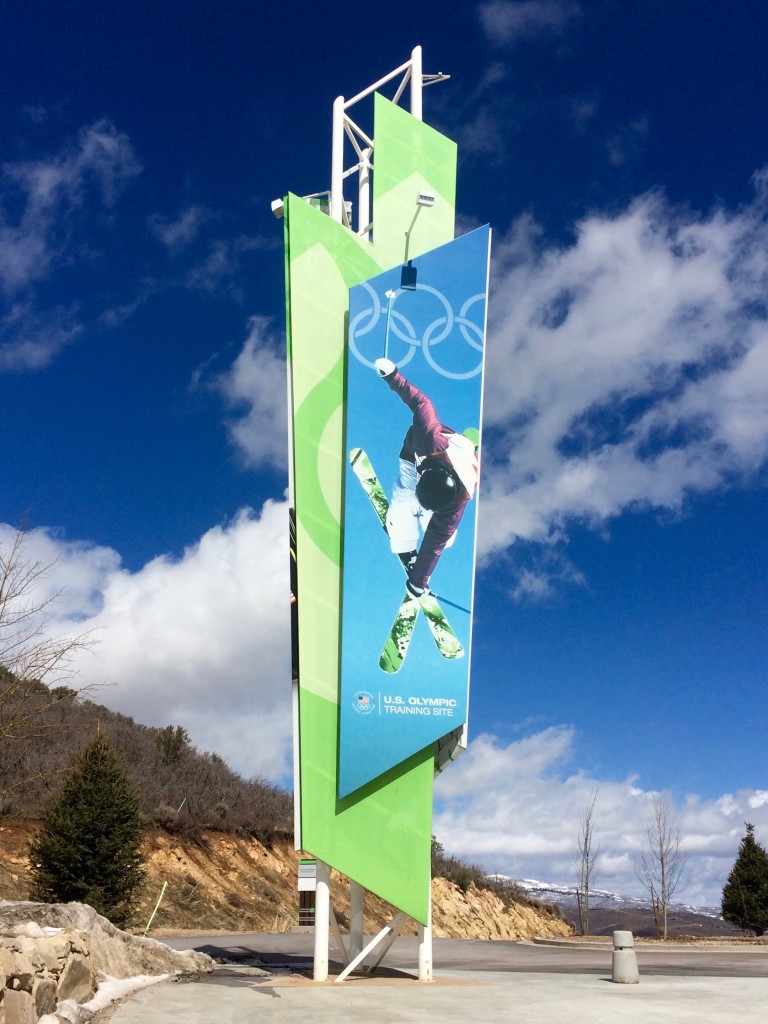 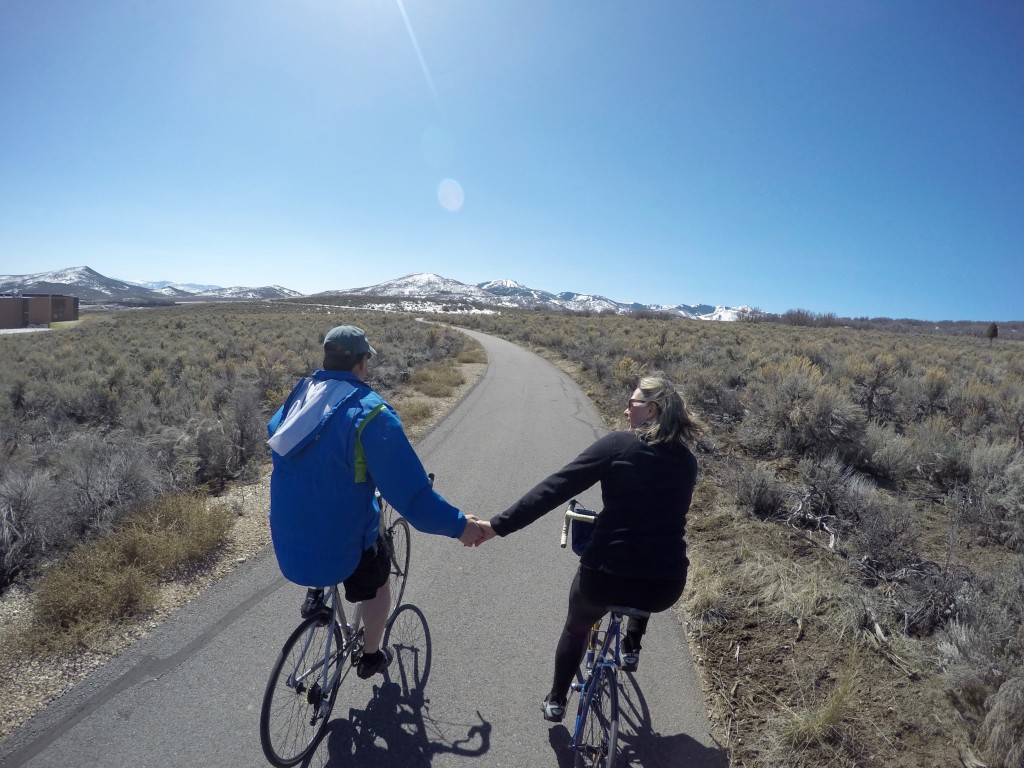 Apparently, Park City can be a dangerous place to go for a hike… 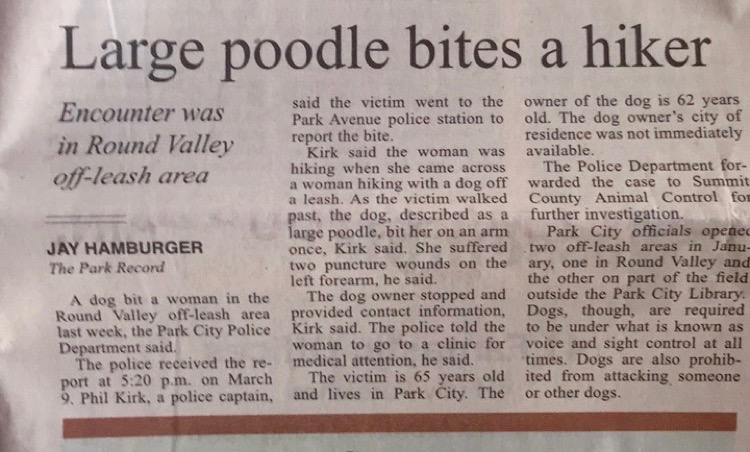 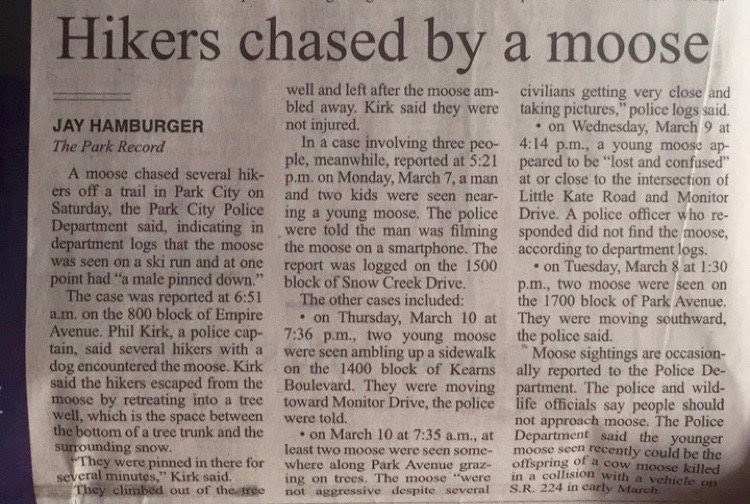 We were within commuting distance of several large resorts around Salt Lake City. Snowbird was big, fun, and Jay got to explore some serious out-of-bounds snowboarding for the first time. 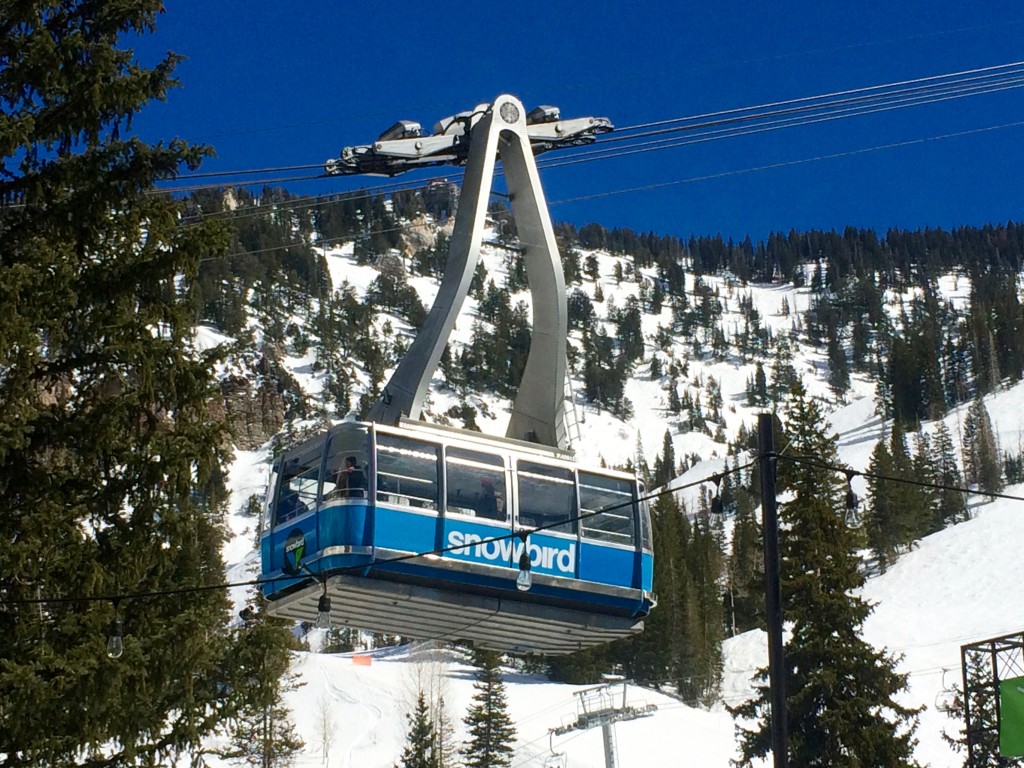 While squished into the gondola, Sue met someone who went to her high school in New Hampshire, graduating 2 years behind her. What are the odds??? 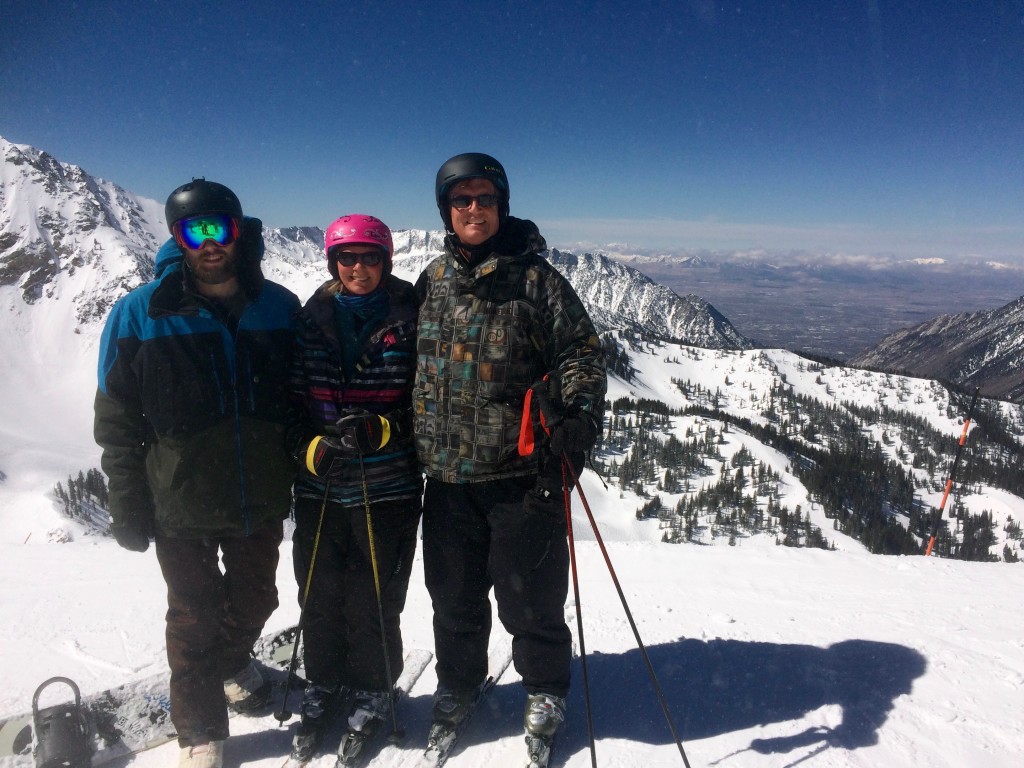 Another day we went to Snow Basin – somewhat off the beaten path in Ogden, Utah. Wow, what a different experience. The mountain was awesome but the place had a much smaller, local feel to it. On our first trip to the top, we were greeted by an employee who volunteered to “show us around”. He listened to what kind of skiing we were looking for and hung out with us for about an hour (and then wouldn’t take a tip)! It turns out he grew up in Cranford, New Jersey, right next to where I lived for 7 years. He also worked with the father-in-law of one of my friends there. Talk about a small world!

After wearing ourselves out (again) on a variety of terrain, we enjoyed a fantastic live band performance in their gorgeous base lodge.

One day produced 8″ of fresh powder, so off we went to Brighton. Everyone was getting a little tired by then, but Sue got out on her snowboard for a few runs since the snow was so amazing. The 11-mile, winding , snow-covered road up to the base was a little exciting. Mulligan handled it fine with his 4-wheel drive, but several other vehicles slid off the road and/or got stuck, which was scary since in places there was no guard rail before the deep canyon.

Evenings at the RV park, we enjoyed whipping each other at ping pong (Jay is the unconditional champion), hot tubbing, and playing games.

The day both kids had to leave, there were several hours between their departing flights. Jeff, Sue and Julia drove out to the Great Salt Lake and actually saw a bunch of rowers practicing (the water was pretty nasty).

We walked around Salt Lake City a bit and saw the Mormon buildings and an aviary. A couple of gorgeous peacocks were wandering around. 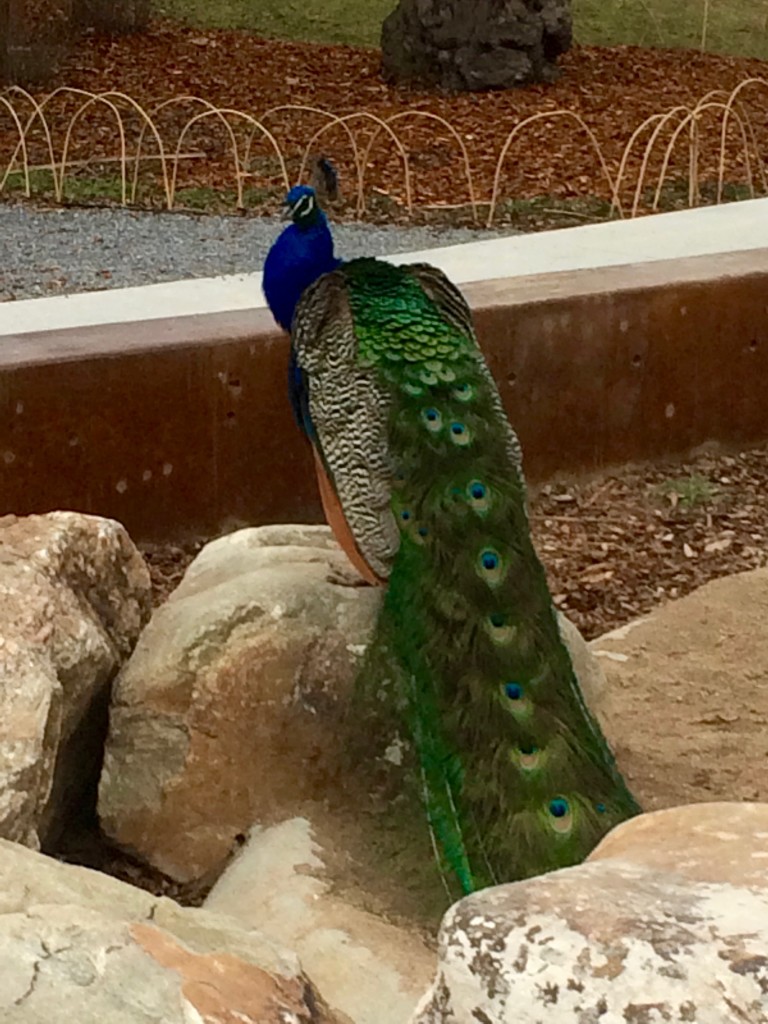 Before Sue left for another week of work, we got to experience Ski Solitude’s X/C ski trails. At 8500′ it tested our acclimation!  The trails were well groomed and it was another beautiful day.

The trails began at the nordic center and wound down to the lodge at Solitude, where we had a snack on the deck before the l-o-n-g climb back up. 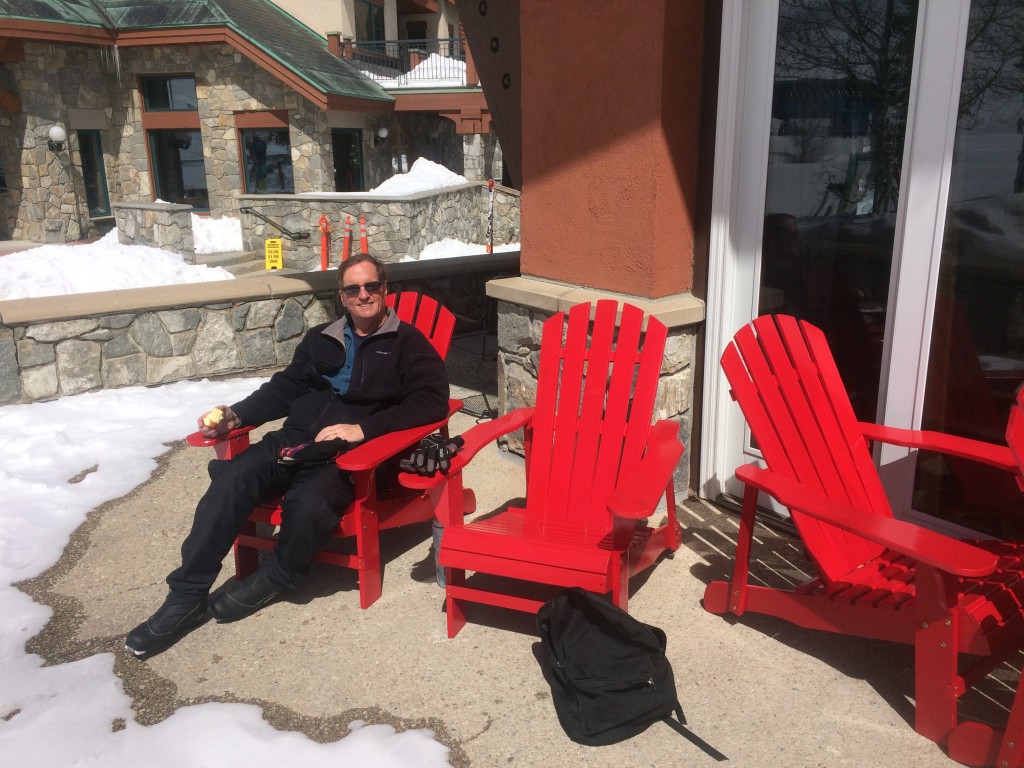 And beer on the deck afterwards – always refreshing!

We really enjoyed the area.  Salt Lake City was much more progressive than we had imagined (although still pretty conservative).   Utah State University seems to have had a moderating effect on the city. We had brunch one morning at a place called “Even Steven’s” with live music.  But the neat thing was that they donate 1 sandwich to the homeless for every sandwich that is purchased!   On the way to the airport with the kids, we ate at another cool place, the Oasis Cafe, attached to Golden Braid Books which had a clearly spiritual bent (“The shopping alternative for conscious living” is their motto).  Park City has a wide network of bike trails, and a rowing club!

Don’t be surprised to find us back here again next March!