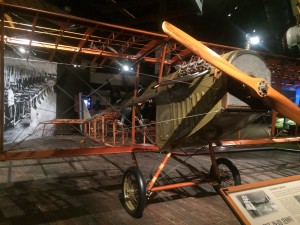 While Sue was away, Jeff got to check out the Seattle Museum of Flight and the Future of Flight Aviation Center (aka the Boeing factory tour).   The museum of flight is one of the premier aviation museums in the country.   The centerpiece of the main display hall is an SR-71 “Blackbird” surrounded by a wide variety of civilian and military aircraft.  It also includes a complete history of rockets culminating in a mock-up of part of the International Space Station. 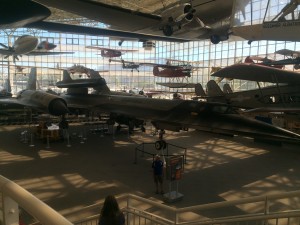 Just when you think you have seen everything, you realize that you are just starting.   There is an entire 2 story wing that focuses on the 2 World Wars.   And outside are an SST, B-17 and B-29 bombers, and a 747 and 787!   Then, if you find the walkway across the road, you find the rest of the space exhibit.   It includes a mock-up of the space shuttle payload bay and the actual Soyuz capsule that space tourist Charles Simonyi flew in.  We won’t bore you with more details.   But plan to spend at least a full day to really experience the Museum of Flight.

The Boeing Factory tour is in Everett, WA,  a ways north of Seattle.  It took me 2 tries to find it because there are actually 2 museums at the airport.   I was really looking forward to this, but honestly, it was a little disappointing.

The Boeing factory (Sorry – no pictures allowed) is the largest building in the world (by volume) and covers 98 acres of land.  There is now doubt that it is an amazing sight to see.  But the tour was underwhelming.  Our guide was very knowledgeable and led us through the tunnels and out to the viewing platforms where he talking about the various production lines and how they work.    But most of what we were viewing was the final assembly of the major components.   And since most planes spend 2-4 weeks at this stage, there is no progress really to be seen.  Perhaps during a mid-week visit, they would be moving some big parts around, but in general, the action is inside the planes and out of view.

(I should put this into perspective though…  Growing up as a grand/son of an auto dealer, I had the opportunity to tour the GM factory in Tarrytown NY in the early 70’s with my mother.   As you walked around, cars were built almost as quickly as the tour progressed.   You saw all the pieces come together to their final product in just a couple of hours.   Somehow I was expecting something like that.  Perhaps the 737 factory would have been closer, since they produce more than 1 737 jet each day!   So if you are looking for lots of cool machines, stamping and bolting and welding – this tour is not for you.    But it is neat to be able to say I have been in here and the Vehicle Assembly Building at Kennedy Space Center.)

We stayed in Gig Harbor, a well-heeled town full of marinas at the end of — you guessed it – Gig Harbor. It is across Puget Sound from Seattle. We drove up to the ferry in Bremerton, WA, and took the ferry to downtown Seattle. We had a really fun day walking all over the place.

The weather was spectacular while we were in the area – 70s – 80s and sunny every day, 50s at night. We meandered through Pike Place Market, walked to the monorail and took it to Seattle Center where the Space Needle is, had lunch outside in an alley full of restaurants, and generally did the tourist thing.

The “RV Resort” where we stayed was  one of the quietest places we’ve been with roomy sites and lots of tall trees. Because we were late in planning, the only site left for the first 2 weeks was up a big hill and did not have sewer hook-ups. After the first week there, poor Jeff had to drive all the way down the hill to the dump station to empty the tanks, then back up and get set up again. We were able to move the final week to a full service site. 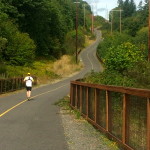 The RV Resort was very close to the Cushman Trail – a 6-mile long, hilly recreation path. I enjoyed biking it a bunch of times. Jeff ran it! (he’s crazy)

In the evenings we enjoyed mountain biking in Banner Park. There were a variety of trails all through a gorgeous old forest.

We also did some kayaking in Gig Harbor. It was nice that the entire harbor is a no-wake zone. We went out just past the entrance and encountered some impressive boat wakes that were fun to ‘surf’ on, and Jeff looked down and saw a huge school of fish right beneath him! 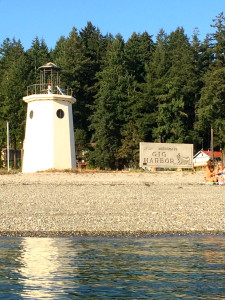 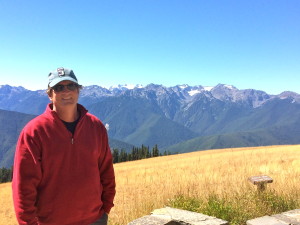 We wanted to go to Olympic National Park for the weekend, but all of the hotels where we wanted to stay were full! So, we made a day trip. This is where the “Twilight” films were filmed so it’s also touristy because of that. We drove up to Hurricane Ridge and hiked around a while.  You can see Canada to the North. The views were stunning if a little hazy due to all the wildfires to the east. 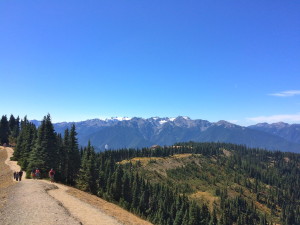 We stopped at the Lake Crescent Lodge and sat in Adirondack chairs on the beach for a while. This is another gorgeous green lake with super clear water. 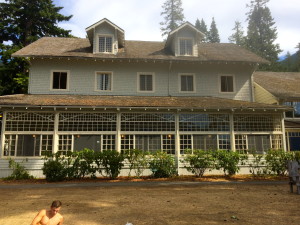 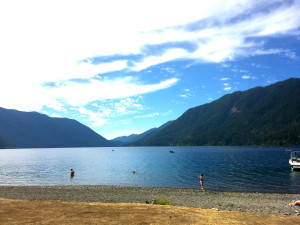 Now we’re off to Portland, Oregon!