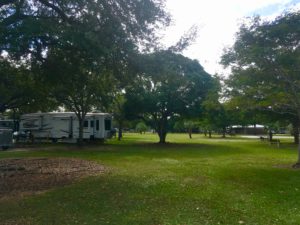 Sue has decided to work full time again to fill the coffers. Her first assignment was covering for a maternity leave in Miami for September and October. We stayed at the same county park campground that we had 2 years ago when we met Ziggy the pig (Larry and Penny Thompson Park). The first week we walked all over the park looking for Ziggy’s rv but he was not there. After some research, Jeff found Ziggy’s Facebook page! His family has moved to North Carolina, started a rescue farm and promotes a vegan lifestyle. They previously toured the country in their motor home with Ziggy the Piggy and got lots of footage of him frolicking in many locations! Here’s the link:  http://www.ziggythetravelingpiggy.com/

We were put in a nice, roomy spot with the common area behind us including a ping pong table. The campground also had a nice pool and access to the rest of the park which had a pond and trails.  There was even a triathlon there one weekend! 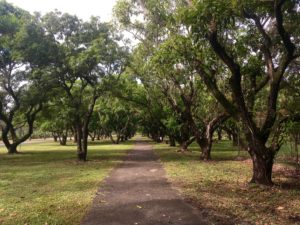 We quickly found out two things about Miami: it’s way too hot in September and the traffic is horrible! It also has the most impatient, hot-headed drivers we’ve ever encountered…and that’s saying something.  They love to lean on their horns as much as New Yorkers do for heinous crimes such as stopping for a red light or only going 5mph over the speed limit through neighborhoods. The 11-mile drive to Sue’s office took 45 minutes, because the traffic averaged 20 mph on the turnpike-at 6:15 a.m.

The Miami Cranial Technologies team was so much fun to work with. Everyone was so friendly and welcoming, and I’ll never forget Damary’s cuban coffee getting us through the afternoon!

Demary even got me in to get a haircut with her cousin who does hair for some very high profile people in Miami.

Since we were there for a long term stay, we joined a gym and volunteered at a local dog shelter.  We walked a bunch of different dogs on Fridays and Saturdays and Sue kind of fell in love with “Newton”. This little chihuahua was found abandoned and has been at the shelter for several years. He has “cage anger”, so when you walk by he acts like he wants to kill you, but as soon as he’s out he’s a complete sweetheart. His favorite trick is to jump from the ground into your arms and lick your face. Although he’s a bit long in the tooth (so to speak), he has so much energy often his ‘walks’ turned into ‘runs’. That energy may explain his name; or that he is about the color of a fig newton. Sue really wanted to adopt him but it was not the right time.

We helped out at the “Howl-o-ween” fundraiser. What an event! It was held at a cool park with a fountain playground for little ones, various walking trails through gorgeous Florida vegetation and beautiful sculptures lit by changing LED lights and surrounded by flowers. 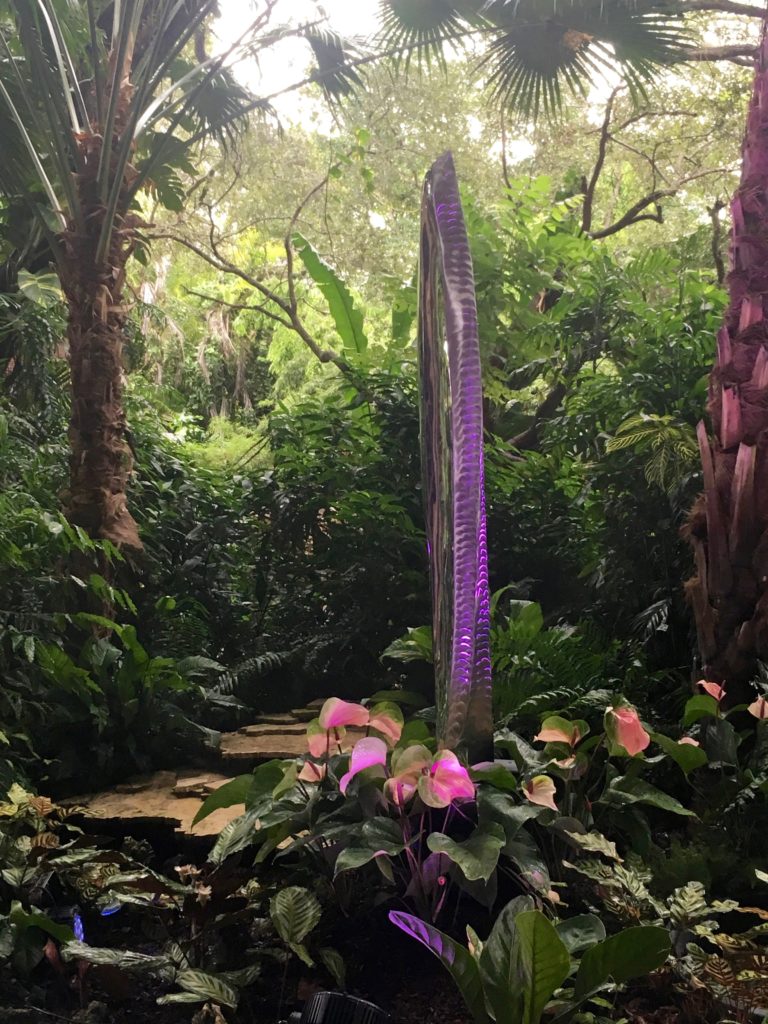 The biggest attraction was a dog agility course where they had a white rag on a motorized string that was pulled around the course, causing the dogs to chase it frantically. Some of those dogs really moved!

The dog costumes were the best… 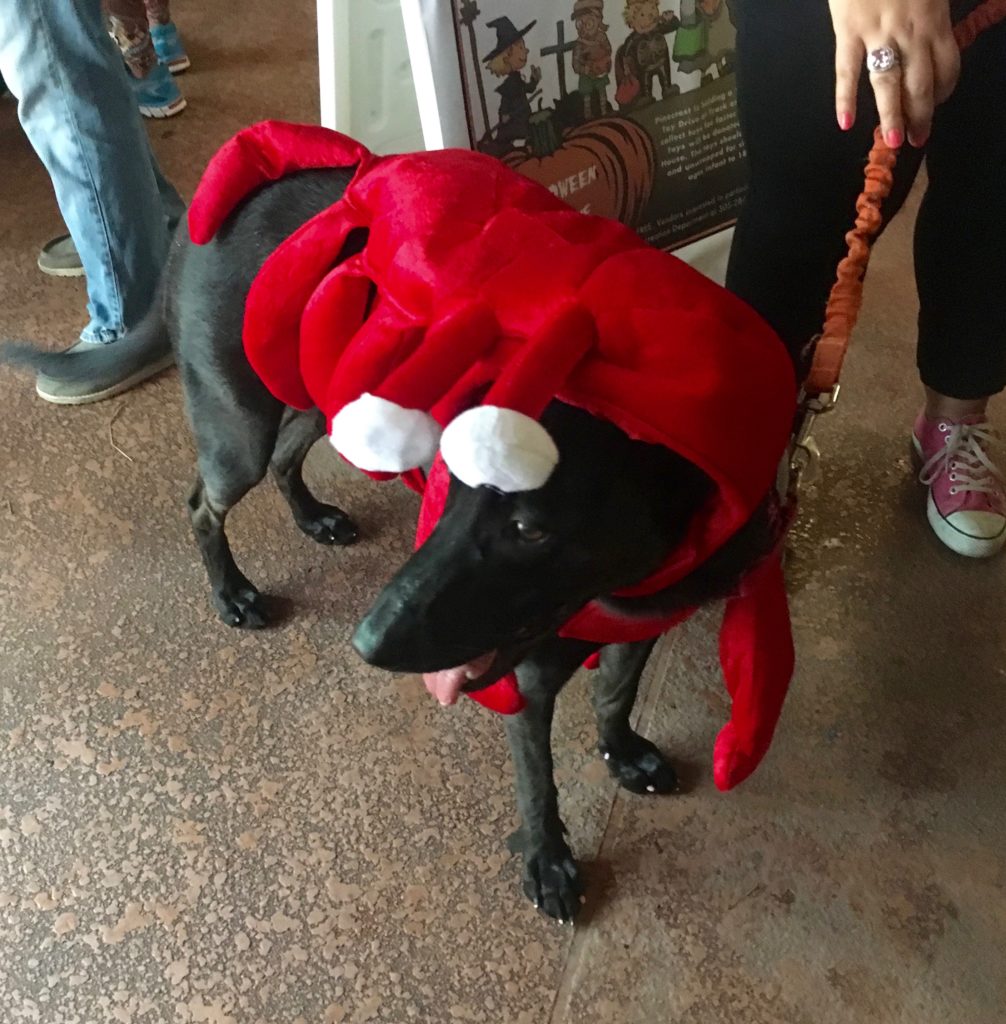 We had a variety of neighbors while in the park who came and went. One day Jeff saw a sign in the laundry room asking for someone to help tow a brand new Montana 5th wheel from the dealer to our campground. We called the number and met “Arcessio”, a local high school history teacher. On the arranged day we drove up to Port St. Lucie, met Arcessio and his wife there and towed his brand new rig to its new home. We had lunch together and gave him a few rv tips.  He played percussion in a Brazilian band with carnival dancers but we never did get a chance to see him perform.

Around this time hurricane Matthew was heading straight for Miami. We waited until Sue’s office was closed for 2 days and booked to the west coast. Lucky for us, it turned north at the last minute and didn’t do much damage, but we were glad not to be there. That’s one nice thing about RV living: if you don’t like where you are, you can leave with your house on the back of your truck like a turtle!

Since we were so close to the keys, we made a few trips down there, once with Jeff’s daughter, Vicky, who came for a multi-day visit. We stayed overnight in Key West and packed a lot into a day and a half. We touched the southernmost point of the United States….will we make the northernmost some day? 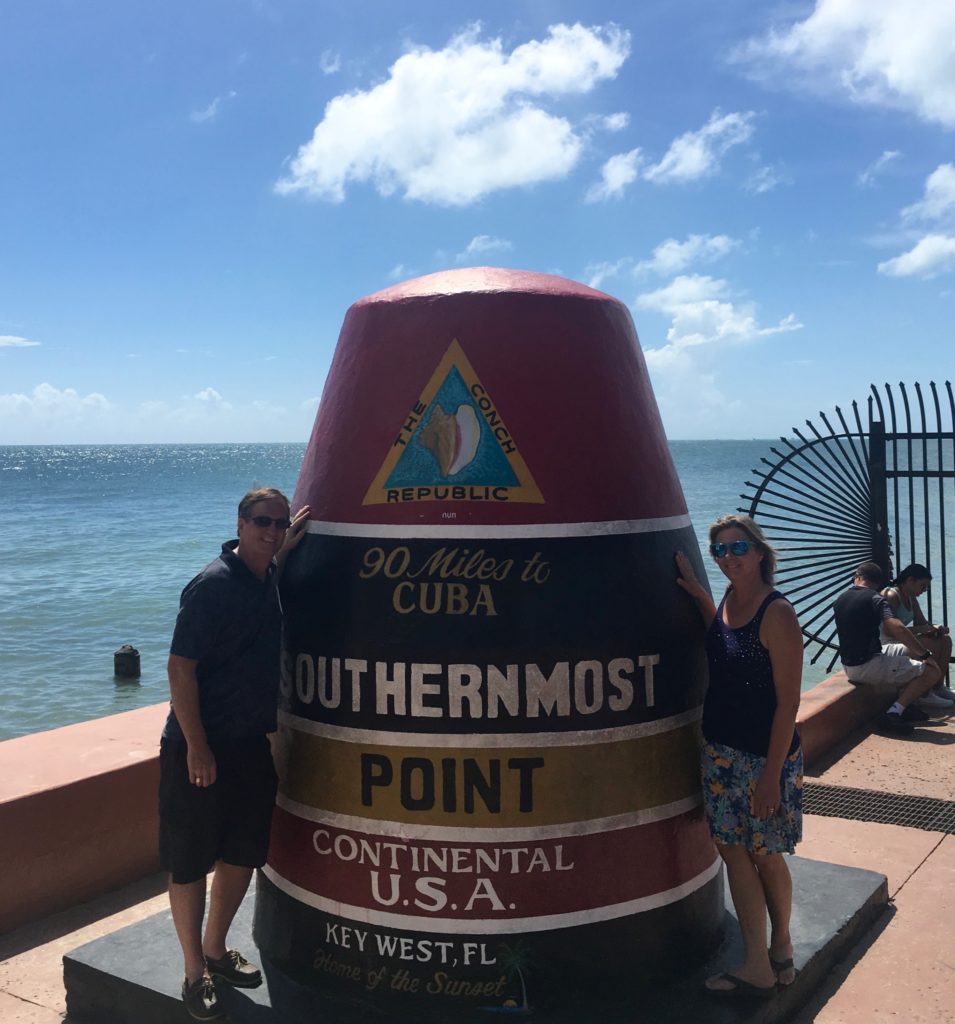 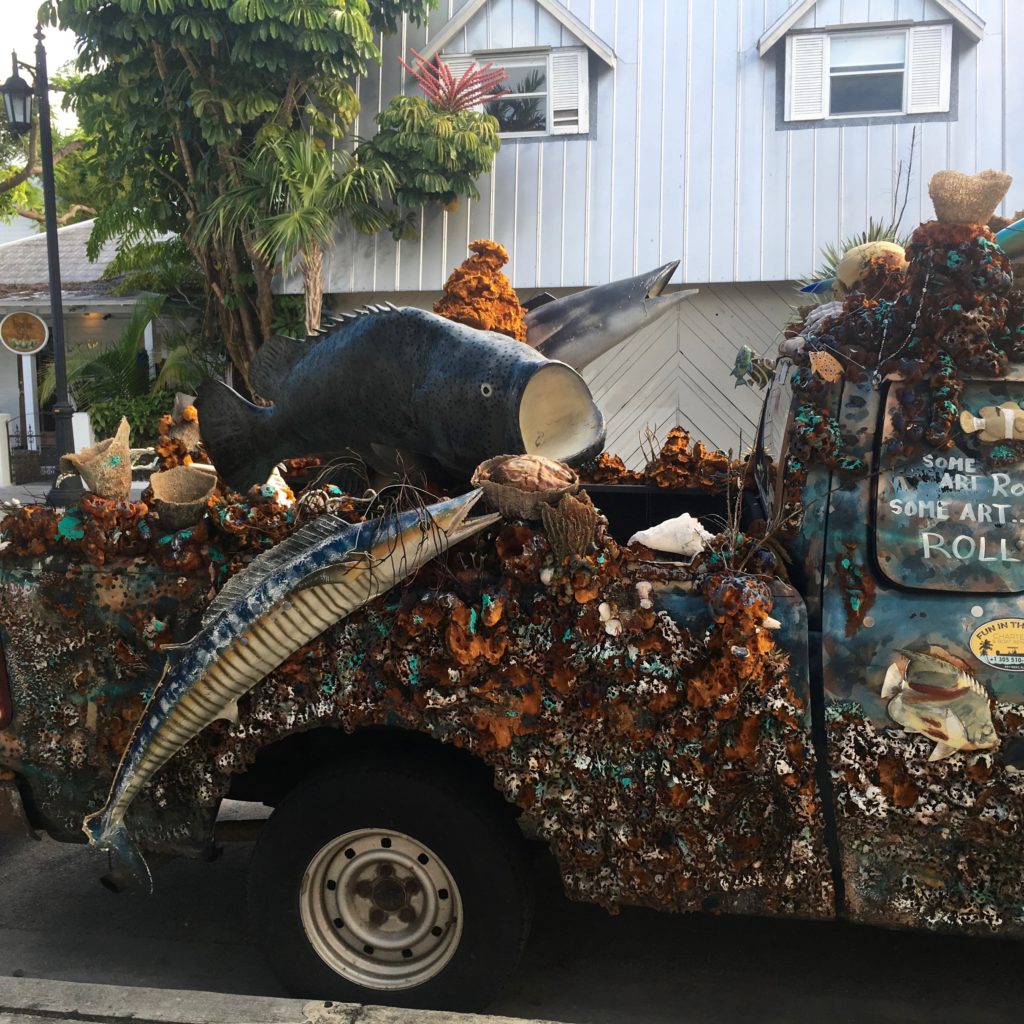 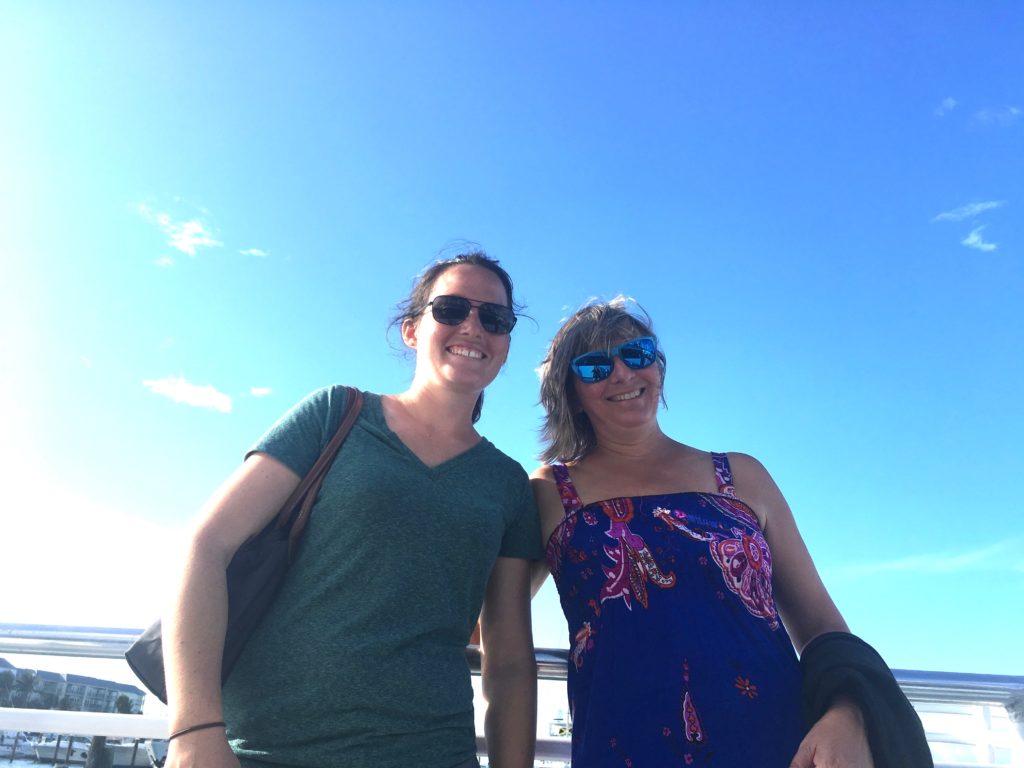 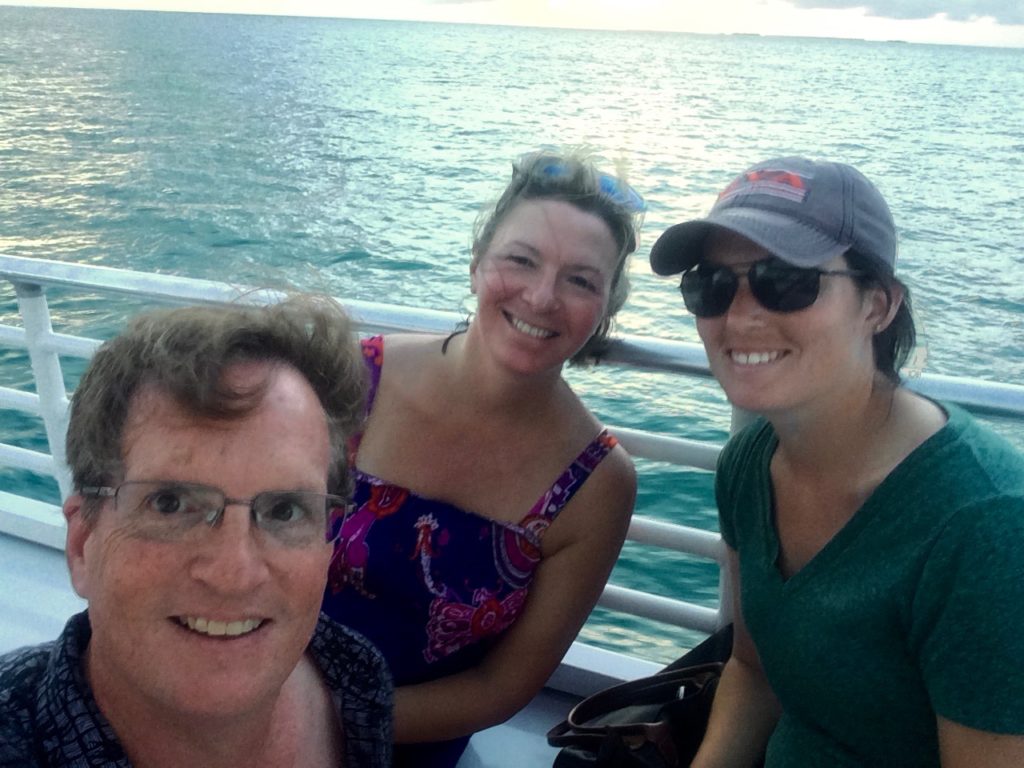 Key West (Margaritaville) has quite a laid back island vibe. There are scooters and bikes everywhere and you never know what you’ll run across, including a bar with a trans-gender show on the main drag (ba-dum-bum), and a dessert place (which we couldn’t get into due to it being so busy) called “Better Than Sex” with a racy decor. We did get takeout, however, and it was amazing. 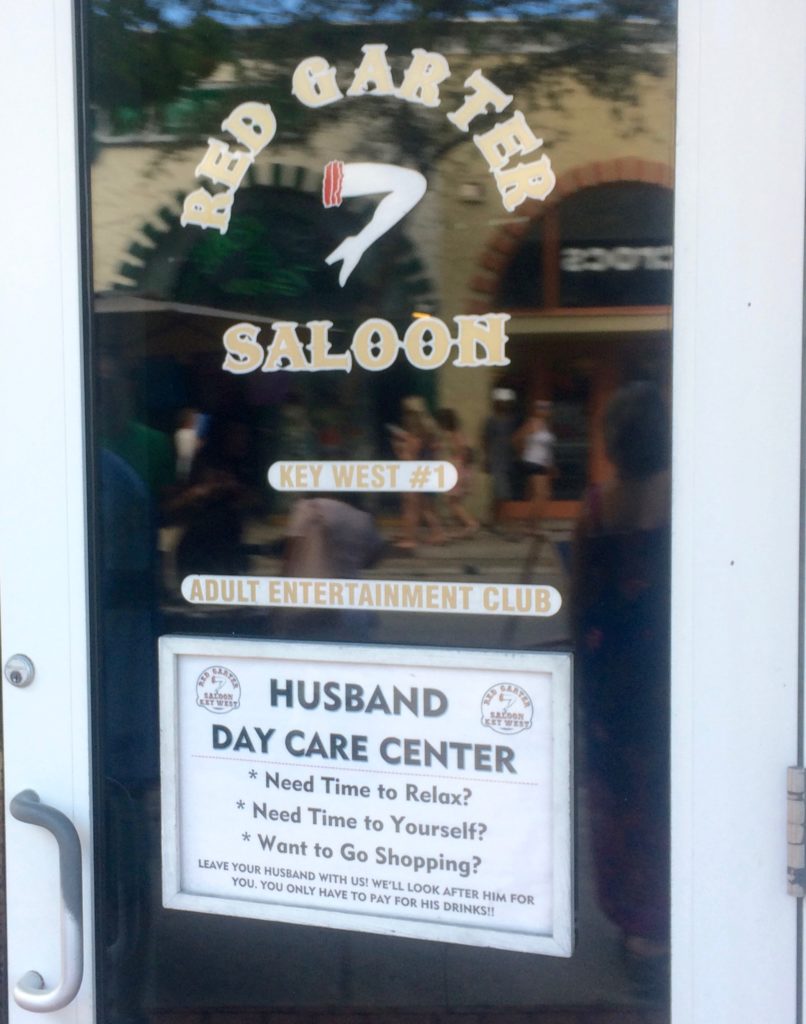 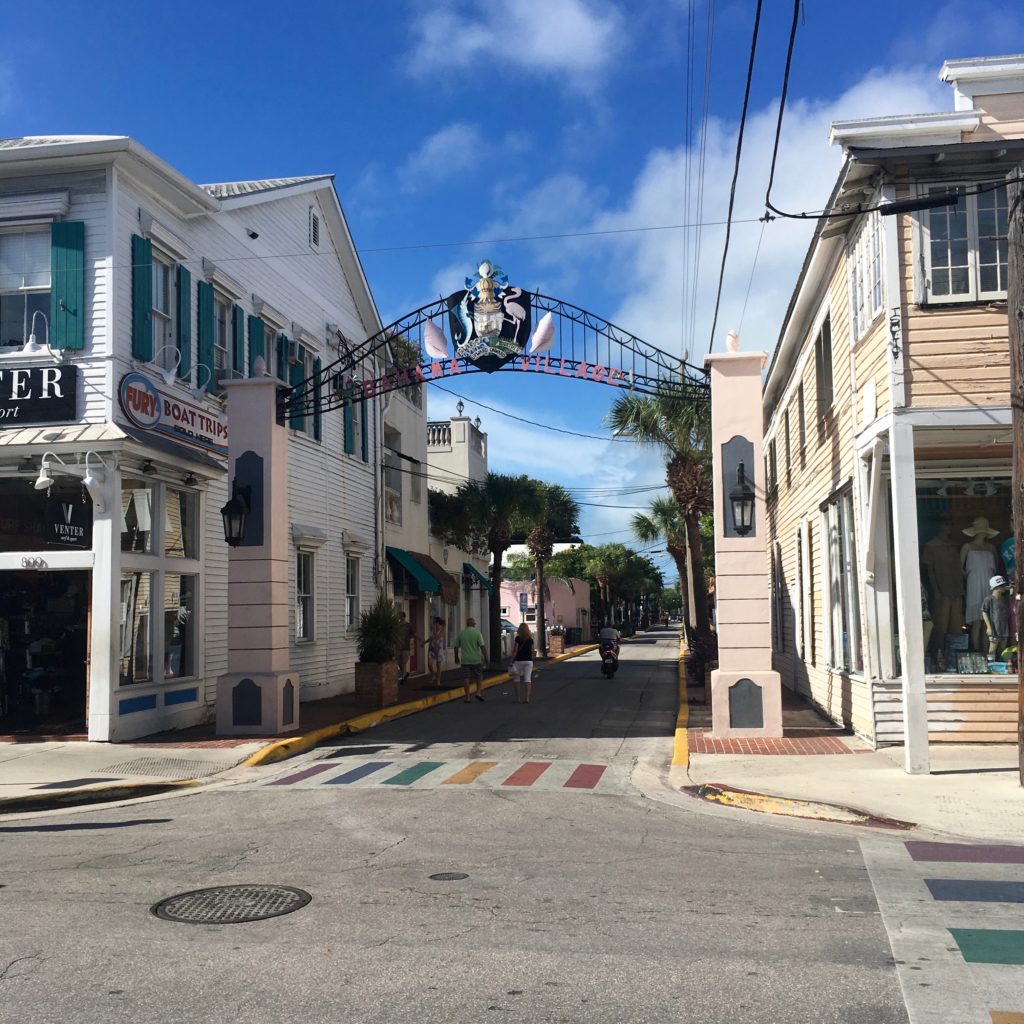 On our way back from the keys, we went kayaking among the mangroves 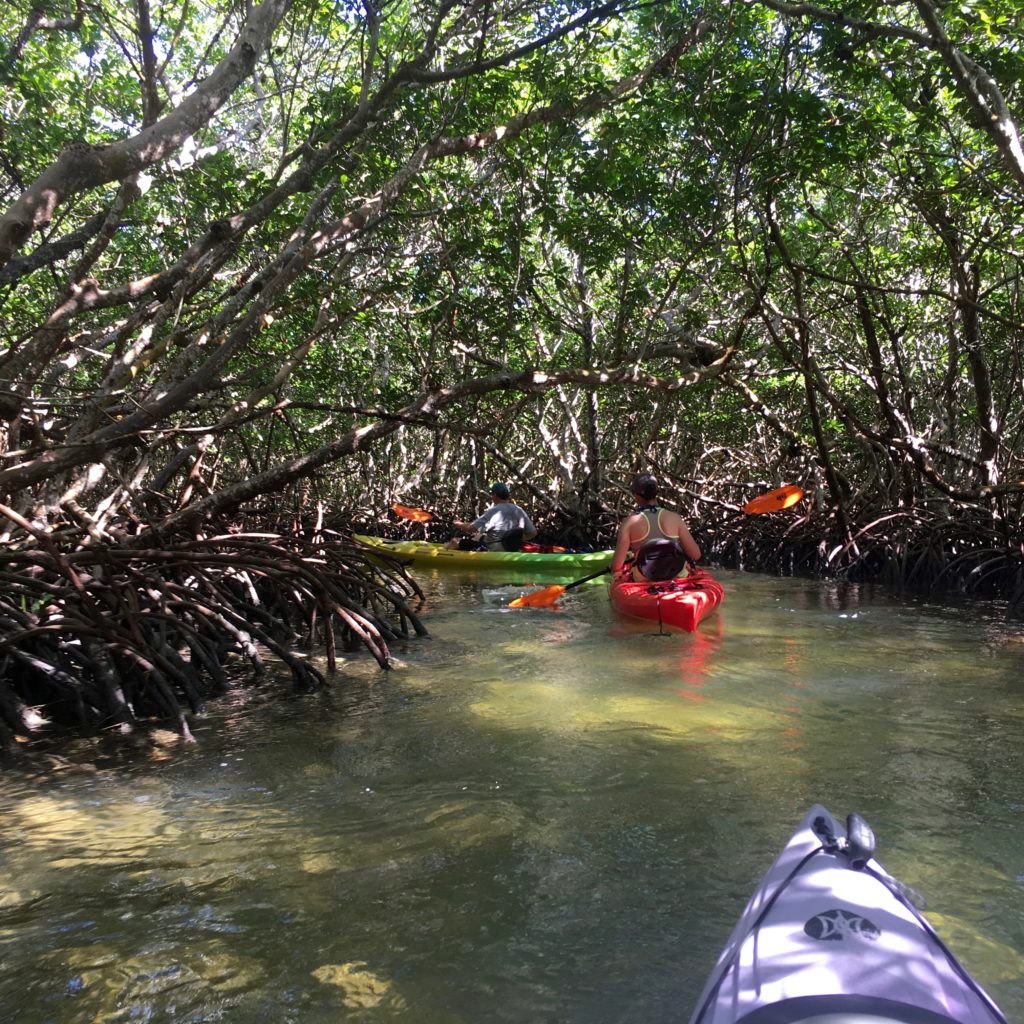 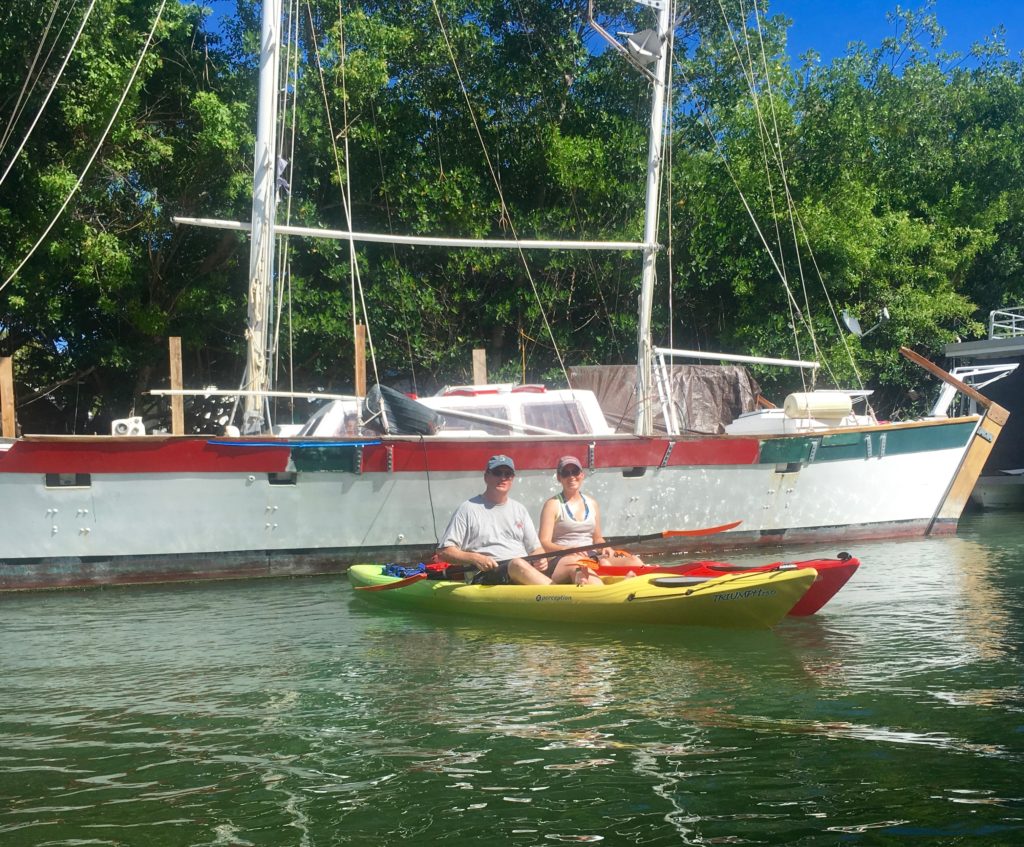 On a different trip to the keys, we found a bird sanctuary with a nice variety of rescued birds including owls — my favorite. One of the workers was spending some time with a little owl getting it socialized so it could be brought to schools for educational purposes.

Whenever we went for a bike ride we were likely to encounter some of these HUGE iguanas. I’m not sure who was more terrified.

We stopped at an outdoor bar to cool off and there was an old, 3-man oceangoing rowing shell there! It turns out there was an unsuccessful attempt to cross the Atlantic and due to bad weather the rowers had to abandon the boat. It floated around in the ocean for a couple of years, and finally ended up in the keys. The owner of the bar also owns the salvage company that finally got it on land, and there it sits. One of its former crew actually went to the bar recently and signed it.   See their amazing story here. 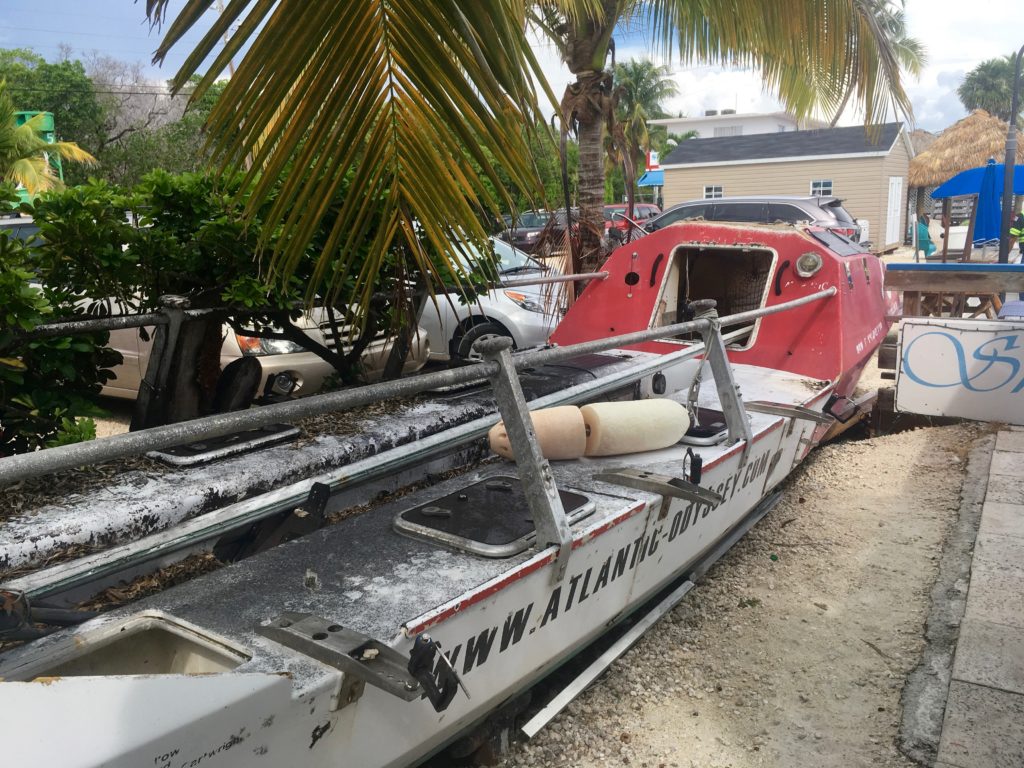 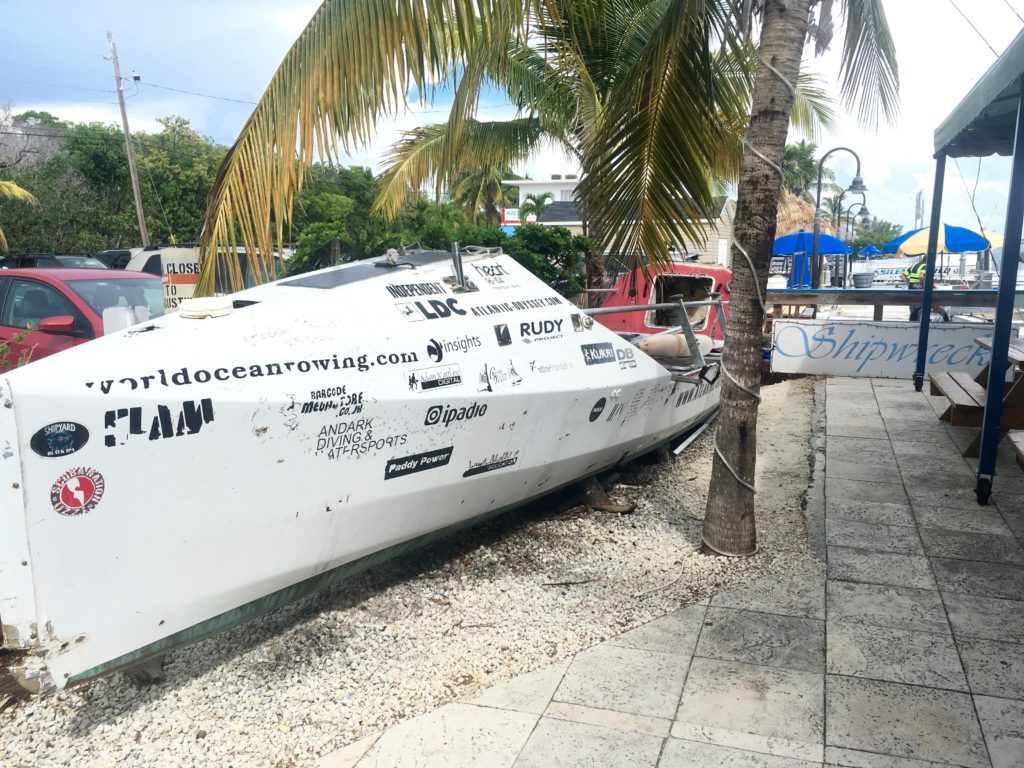 One day we drove over to Shark Valley, which is part of Everglades National Park. We rode the bike trail and saw a LOT of alligators.  Another couple was taking selfies much closer to this guy than we were!

On another weekend we checked out Key Biscaine, which is up near Miami. It’s a beautiful state park with a lighthouse, beaches, biking trails and a restaurant or two on the water. 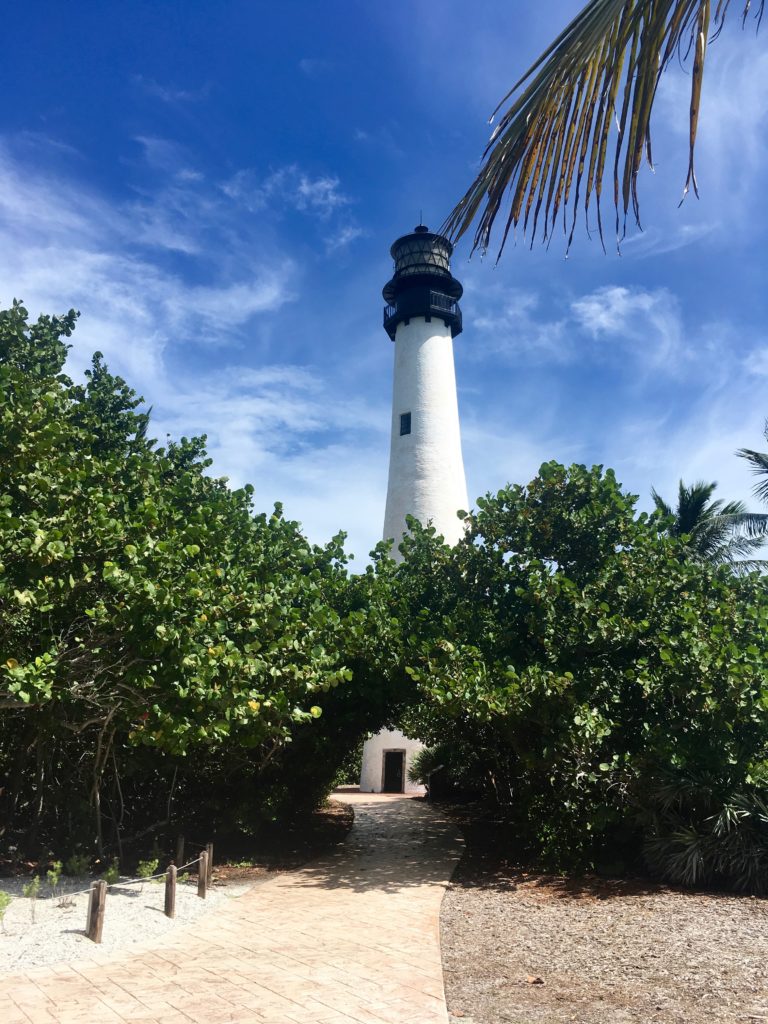 For Thanksgiving we drove across “Alligator Alley” to Naples where Jeff’s parents spend the winter.  They hosted a huge turkey dinner for us and Jeff’s sister Anne and her husband Mitch. It was delicious and fun!

While there for the weekend, we again went kayaking in Lovers Key State Park. We paddled along a winding inlet off the ocean for a couple of miles and were rewarded with a dead-end filled with manatees. They lolled around a small area and came very close to our kayaks.  It was a great encounter. 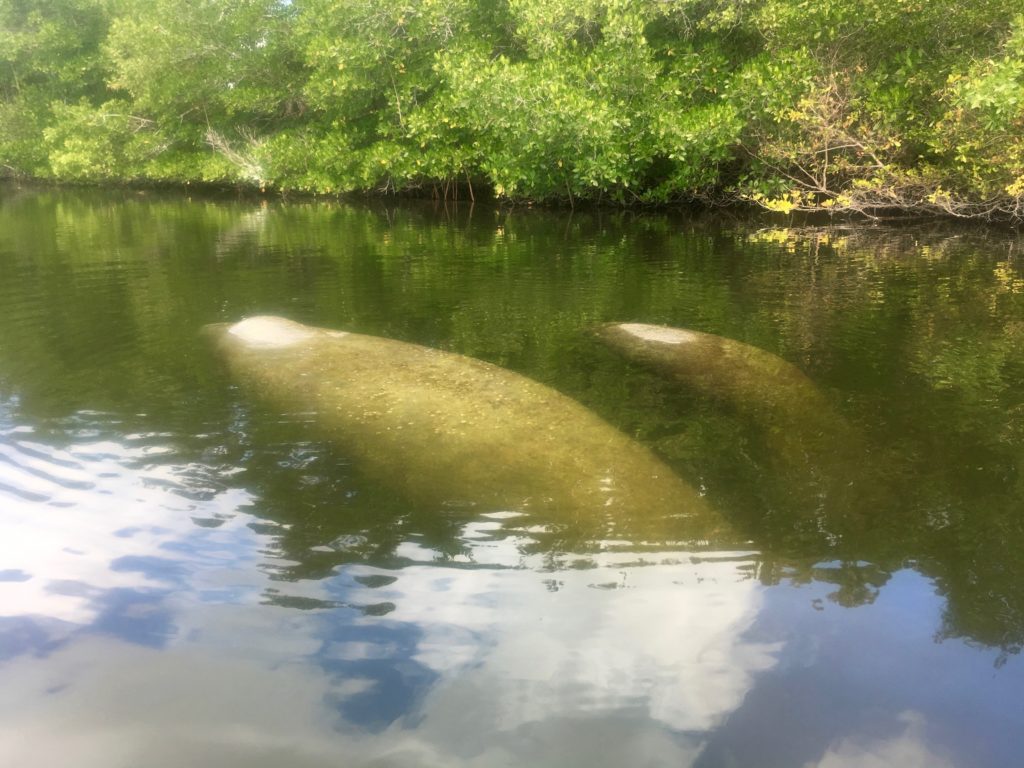 Homestead Air Force base was not far away and one weekend they hosted the USAF Thunderbirds.   We found a side road at the end of the runway to watch from.  But it was cloudy and rainy and we thought they had cancelled the show.  Just as we started to drive away, they came roaring over us.   We quickly parked and watched the rest of the show.

And now off to Naples for Christmas: our 4th return-stay at a campground we’ve been to before since we started our adventure.