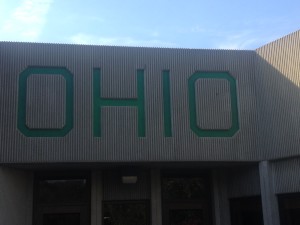 We spent 3 weeks based out of Columbus, OH, because that’s where Jeff’s employer, Regatta Central, is located. I say “based” because neither of us was there for the entire 3 weeks. One of the weeks was my monthly work week, and I returned to Hackensack, NJ. Jeff had the rare opportunity to work in person with folks he usually only speaks to on the phone, and then spent a weekend in Boston at the Head of the Charles regatta. He also made a quick, 2 day trip to Phoenix where his daughter, Vicky, was presented with the national collegiate polo female player of the year award. 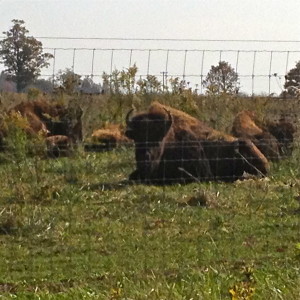 We stayed in a small RV park in Alton, OH. We were lucky it was only 20 minutes or so from Regatta Central, because our neighbors told us it’s the only place to stay with an RV in the area. It was full the entire time we were there! The park was just west of a dense business area (convenient) and bordered by a cornfield on the west side. We were also only 5 miles from an awesome metro park with miles of multi-use trails, a nature center, and bison! There was also access to the Ohio to Erie rail trail which spans 245 miles!

Unfortunately, the weather inhibited much of our outdoor exploration. It was cool and rainy the majority of the time we were there. We got out for a couple of visits to the metro park, but no kayaking this time (there is a river in the park and through downtown Columbus, too).

Early in our visit we met some very friendly neighbors, Gina and Randy, who have been on and off the road for 25 years! Gina home-schooled 4 children in their camper until her oldest was 15 and demanded her own bedroom. Randy helped Jeff with replacing the tires on Monty (and Jeff helped him with his heater control board).

There are a lot of online forums including the “Montana owners club”. Several people have had bad experiences with the tires that came with our model of RV. We were concerned too because the weight of our rig was at the top of the weight rating for those tires. When a tire blows, the treads can fly up and damage the undercarriage (read, living room) of the RV, causing expensive repairs. We felt better upgrading them before that happened.

After my work week my company was nice enough to let me fly home from Philadelphia so I got a weekend with my daughter Julia and her man, Mike.  Saturday we went apple picking and made apple crisp. 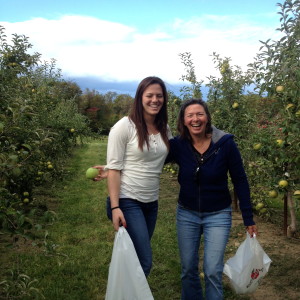 Sunday, we visited an amazing place nearby in Pennsylvania called Longwood Gardens. It was huge, with fields, forests, topiary, fountains and a gorgeous conservatory with exotic plants. 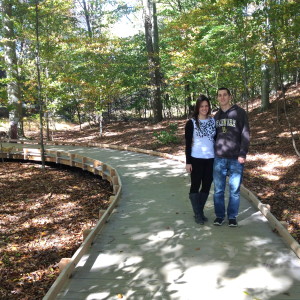 It was great to see them and we’re looking forward to more visiting after our next stop…East Stroudsburg, PA.

But before we left Columbus, Jeff flew to Scottsdale, AZ for a night to celebrate Vicky’s female polo player of the year award!   Vicky was given special leave from her US Navy Officer Candidate School to attend this event.    It was wonderful to see her receive it and hear all of the accolades!
It was a quick turnaround so we could start our drive east for an even more momentous occasion for Vicky!