Our first stop in Colorado was the western edge of Colorado Springs, near Manitou Springs. We stayed at “Garden of the Gods” RV Park, and we had a gorgeous view of Pike’s Peak right from our yard. 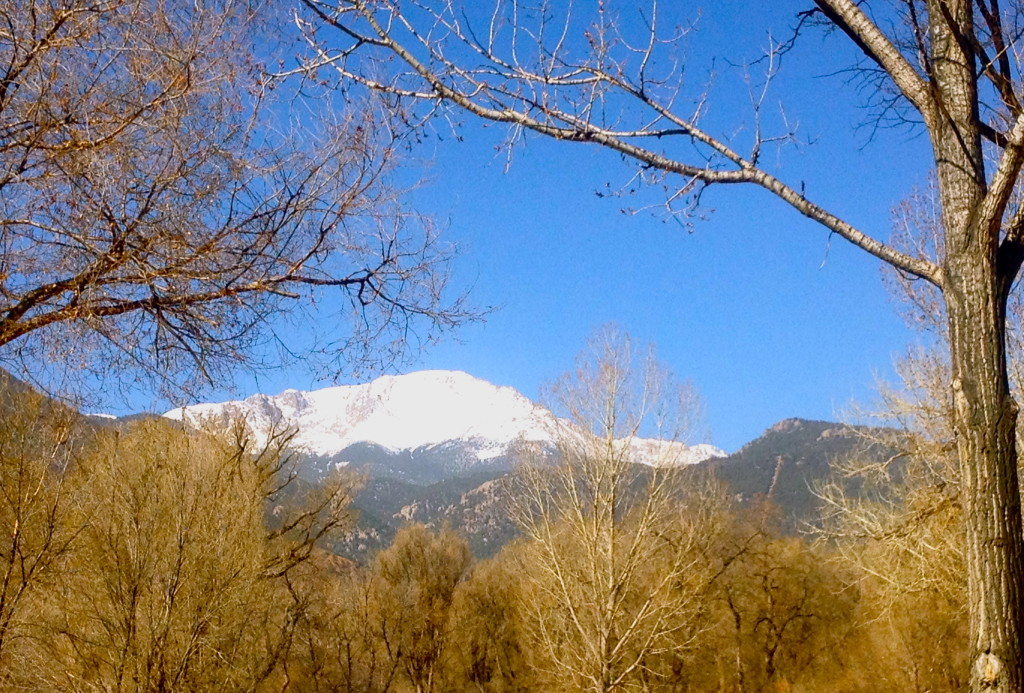 Shortly after arriving, we discovered “The Incline”. This is a series of steps built on an old indian trail turned cog railway which ascends 2000 feet in one mile. Starting at 7000 feet of altitude, this was quite a challenge! The first day we went over to check it out, we rode our bikes from the RV park  first on a paved trail, then through the town of Manitou Springs and up the steep road to the parking lot. At that altitude, we were a little light-headed just from the bike ride.  It’s a popular thing to try, and there were plenty of folks on the trail.  Some were obviously there for the first time like we were, and others were clearly veterans, including one guy with a high altitude training mask restricting his oxygen.  It’s possible some of these folks were from the olympic training center in Colorado Springs. We climbed a while, stopping to return oxygen to our bloodstreams at more and more frequent intervals as the trail steepened. After an hour or so, we realized we were overdressed and under-prepared, in terms of water and sunscreen, to make it to the top that day. Fortunately, about 2/3 of the way up, there’s an access to the trail you’re supposed to take down from the top. We were amazed to find more people than not jogging down the trail! This was our first clue that Colorado hosts a lot of very fitness-savvy folks. 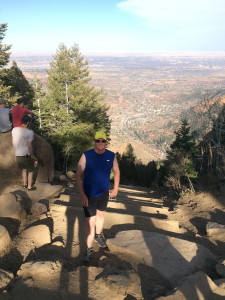 Later in the week, I went back with appropriate provisions. I rode my bike up to the base, and gradually made my way up. After passing the cutoff we’d taken before, it didn’t look much further to the top. By this time, I was taking about 30 steps and resting for about 13 breaths. I made it to where the trail seemed to end, and now have a new phrase I hate the most: ‘false summit’. It was another steep, 100 steps or so to the top. By then, I was taking 5 steps and 20 breaths. Even when I could see people dancing around and taking pictures at the (actual) summit, it still took me five more minutes to get there!

Jeff scaled it the follow week while I was away at work. Even though it was incredibly strenuous, there’s something about accomplishing it that’s very satisfying. And the view was great, too! 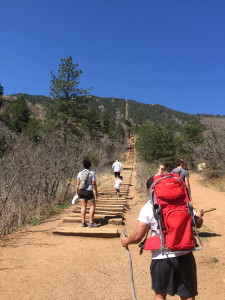 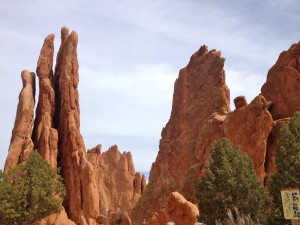 Right behind the campground is a state park called “Garden of the Gods”. It was amazing. Huge, red cliffs jut out of the ground in beautiful formations. There are paved paths in some areas and hiking/biking trails in others.There’s also a road that goes through the park. We went there several times and it never got old. They also allow rock climbing on the cliffs. You can see these formations from miles away, and  depending on the time of day the sunlight on them changes dramatically. 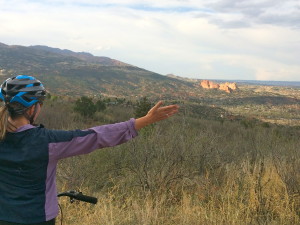 In the other direction but still within biking distance was Red Rock Canyon. This is another “open space” for folks to enjoy hiking and mountain biking. We had some of the most fun mountain bike rides there we’ve ever had. It was just as beautiful as Garden of the Gods and also had a small lake. The trails were challenging but doable and we went there often. You could see the Garden of the Gods across the valley from the trails. I have to say this even though Jeff doesn’t think I do– if you click on these small picture they’ll load at a normal size 🙂 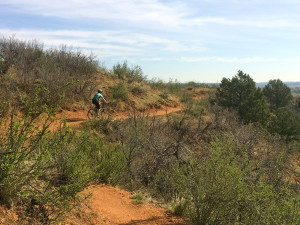 Just east of where we stayed was Old Colorado City – a cute area of town with all kinds of shops and restaurants. One place, the “Mountain Shadow” had the biggest cinnamon buns I’ve ever seen!  It weighed at least a couple of pounds and took us 2 days to finish it.

After dropping Sue off at the airport for another week of work, Jeff stopped in to see the Air Force Academy.    Having been to West Point several times, and the Naval Academy, and knowing that the AF Academy was Jeff was expecting another stunning campus.   While the cathedral was incredible, the rest of the campus was very utilitarian; square, commercial  buildings around a grassy quad.   Jeff also stopped by the military cemetery to pay his respects to a family friend who was a 4-star general in the 50’s and early 60’s.   Surprisingly, all of the grave markers are flush to the ground, with no significant differences for any of the General Officers.    There are planes displayed all over campus, including a B-52 bomber.   While walking around that, Jeff talked to a person that is an officer at nearby Cheyenne Mountain (NORAD – remember the movie “Wargames” where they enter the mountain?).   General Kuter was the 2nd commander in the early 60’s and this officer walks by General Kuter’s picture in the hallway every day!

One weekend we drove south to Canon City and took a 2 hour scenic ride on the Royal Gorge Train. What fun! They served a nice lunch and there was an open-top car to allow taking in the views. It was a gorgeous day with spectacular scenery. 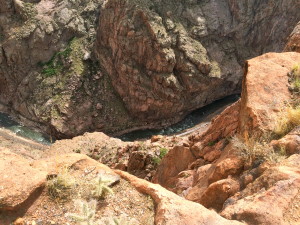 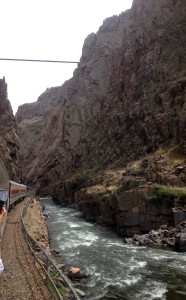 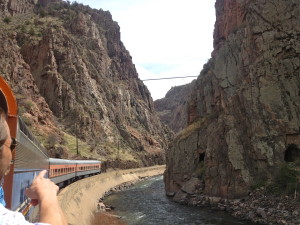 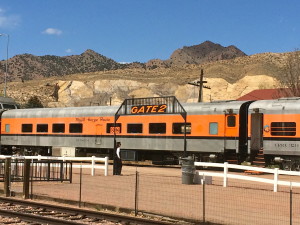 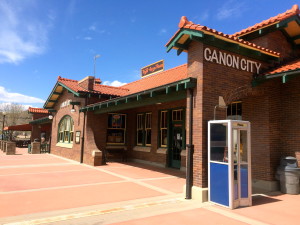 The entire time we were at the GOG RV Park, there was a person sitting in a jeep near the office advertising ‘Jeep tours’. One day we drove up to 11 Mile Canyon. There’s a dirt road that follows the canyon with many parking spots so you can fish or have lunch. We had a yummy picnic along the river, and on our way back stopped and ran into the jeep tour guy who was driving some of our neighbors around! He even recognized us. 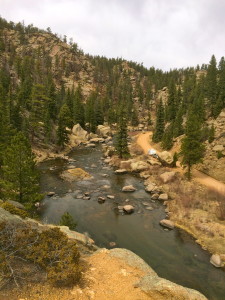 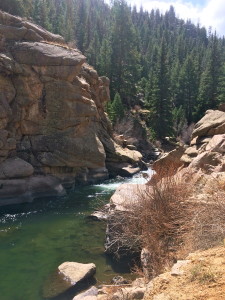 We also drove around on some fire roads through the mountains west of Manitou Springs. We saw some big horn sheep, and “Granny’s Hash”. It would be been fun on a dirt bike! 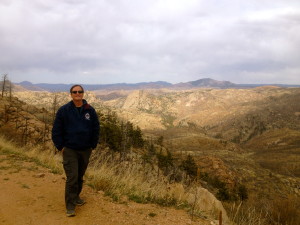 In a lot of the places we’ve been this winter it was very sunny but either a little too cold or a little too windy to sit outside comfortably. So, with Jeff’s help, I built myself a personal sunroom – I call it “The Cozy Cocoon”. 🙂

People are really in to their dogs in Colorado, and businesses are very tolerant of them.We went out for a couple of evenings in Manitou Springs to get a flavor for the locals. We were just ahead of full tourist season so it was nice in that respect. We saw a fun local band and this cute couple with their puppy. 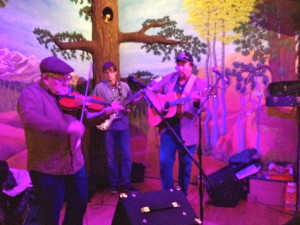 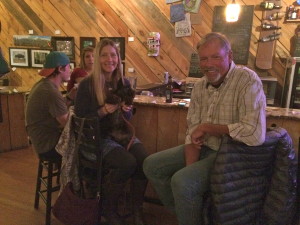 Manitou Springs is a funky little town right at the base of Pike’s Peak. There are 7 actual mineral springs there which are set up so you can taste the water. Each has its own flavor and lore depending on the minerals in them. The ones I tried tasted pretty bad! 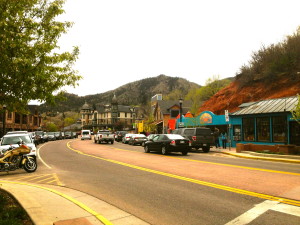 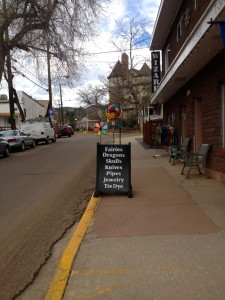 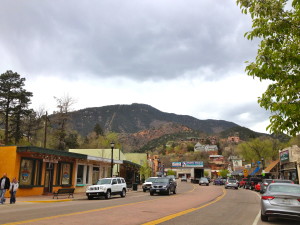 We had a nice dinner at The Cliff House, and were seated right next to the classical guitar player.  It was fun chatting with him between songs. There’s also a fondue restaurant (not part of a chain) in town with a cozy wine bar below it.

This area is the first one beside Bar Harbor, Maine, where we could see ourselves living someday. We will definitely go back there to spend more time. Now, we’re off to Loveland, CO.