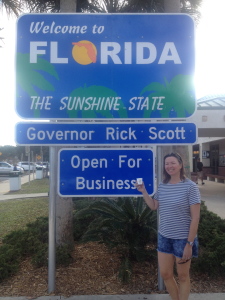 When I was growing up we used to drive from New Hampshire to Florida to visit my grandmother in Deland. We always stopped at the welcome center and got a plasic orange filled with fresh Florida orange juice. We had to stop to see if they still did that. You now have the choice of orange or grapefruit juice, but in a paper cup rather than the plastic orange with a straw – delicious!

We were on our way to Jacksonville, FL where Jeff was attending a convention for work.  Hoping to finally get some warmer weather –  Not! 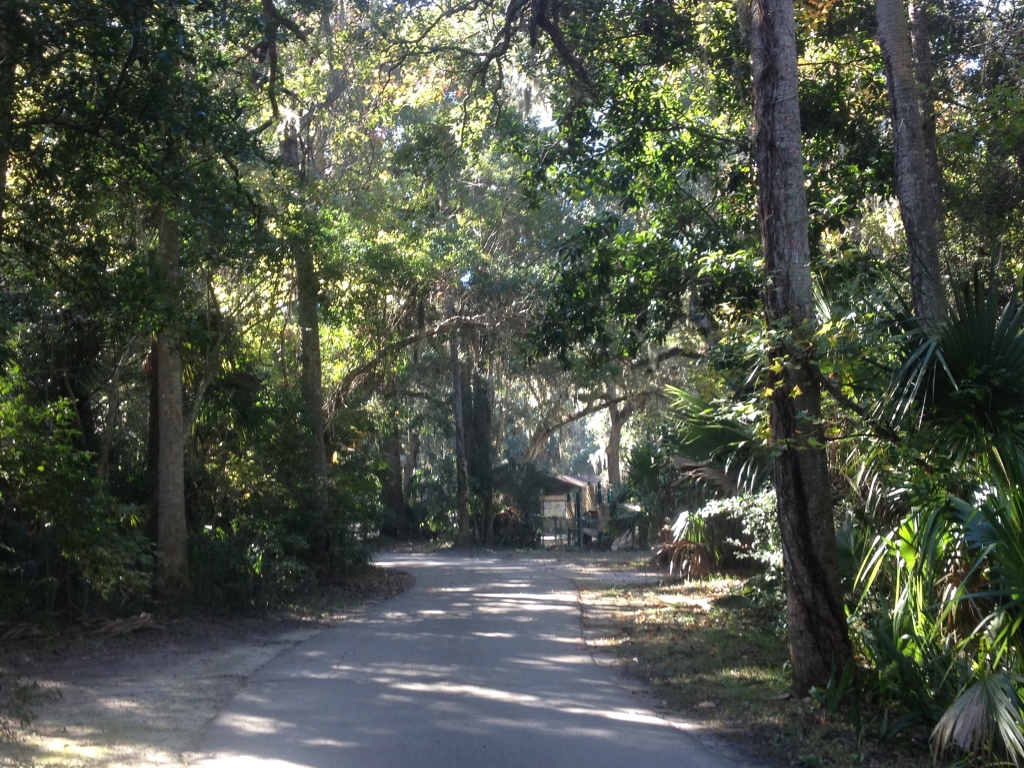 We stayed in Mayport (another Navy town!) east of Jacksonville.  Kathryn Hanna Abby Park is a beautiful county park right on the ocean.    The roads in the campground were a little scary – narrow with lots of twist and turns and palm trees and weeds to maneuver around.   But once settled in, we found how peaceful a park it was.   They advertise having some of the best mountain bike trails in Florida!  While not mountainous like we’re used to,  there were  small ups and downs, lots of twists and sandy, banked turns. 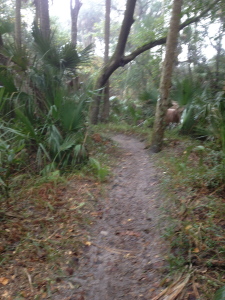 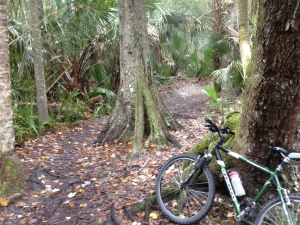 Although there were frequent Navy helicopters during the day, in the evening it was so quiet that we could hear the waves on the beach! 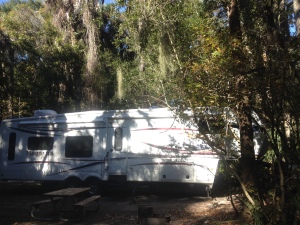 The wind from the north-east gave us lots of fog the first week.  It was so humid, the trees were dripping!  But the clearing the second week dropped the temperatures even more!  Geesh – we are in Florida!

The biggest downside of the park was that it did not have WiFi.  After getting hit with overage charges in November, Sue ventured out many days to find free WiFi while Jeff worked. 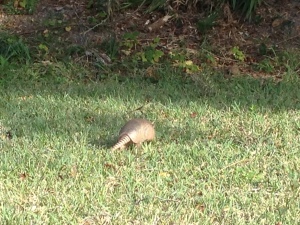 In the middle of the park is a lake and bird sanctuary. The bird watching was really fun there. Cormorants, pelicans, egrets and a variety of ducks abound. 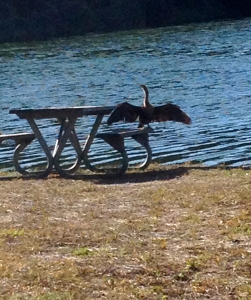 Biking, walking on the beach and on the trails, and nice flat runs gave us plenty of fresh air.

The last afternoon was sunny and finally warmer.  So we found a smooth parking lot with a few small hills and Sue taught Jeff how to long-board!

One of the highlights of our stay there was Sue getting to meet up with a highschool friend (thanks, Facebook). Jeanne drove a couple of hours to meet up in Jacksonville Beach where we had a blast catching up.

One of the funny things we run into, is finding last minute places to stay during our travels.  It was a 2-day drive to Jacksonville from Virginia so we stopped for one night at a campground on Santee Lake in South Carolina – 1/2 way there.  The lady on the phone gave us directions to the campground, but neglected to tell us there was another campground right before theirs on the same road. We pulled the truck and trailer up to the unmanned gate house after dark, and a helpful resident directed us across a huge parking lot to a check-in center. We mentioned we had called ahead to arrange a spot and they started asking for our name and other information. It soon became clear that we were in the wrong place. They tried to get us to stay, going so far as to say their campground was much nicer than the one we were going to, and feel free to come back if we decided not to stay there! So we had to back the entire rig up for about 25 yards and turn around. Our campground was the next street down, nestled in the pine trees. It wasn’t fancy but we were only sleeping and leaving so it didn’t matter.

Now we’re off to Titusville for a week, then Miami, then Naples!

One thought on “Jacksonville, FL”