There are a lot of “tragedy or blessing” tales. Was losing Growler a tragedy? We also lost all of our ski boots (downhill and cross country), my foldable ORU kayak, all our kayaking paddles, Jeff’s snowboard boots, our hullivator kayak rack, 2 rooftop bicycle racks, and a lot of other things. But, we choose to react to these type of things with the ‘tragedy or blessing’ mindset. Maybe something bad would have happened if we’d traveled that Saturday. Maybe Jay wasn’t meant to be on that plane to Salt Lake City. Maybe Growler wouldn’t have made it over the rockies. Maybe one of us would have really hurt ourselves in Park City. There are so many possibilities, and all we lost was stuff.

After a brief, unproductive conversation with airport security, a young policeman arrived and took all the information again. He told us he’d review the security tapes and they’d look for the truck on the streets of Albuquerque. Then he gave us a ride to the rental car building so we could get home (an hour’s drive to Santa Fe).

The next morning (Saturday) we spoke to our insurance company, Progressive. We were shocked to find out they were ‘investigating’ us including  background and credit checks! They wanted to speak to each of us individually about the “story”. While they were professional, we felt even more violated than we already did from losing the truck.

So, we were stuck in Santa Fe until we could replace the truck, it being our only vehicle and the only way to move Monty! Fortunately, this is not yet high season at the RV Park so we weren’t keeping anyone from their reserved spot. Saturday morning, the replacement truck search began. We were hoping to get another used truck, but we quickly found out dual rear wheel trucks are few and far between around here due to all the ranches.

The pressure was on because we were supposed to pick Jay up in Salt Lake on Wednesday, so we started considering buying new.  It turns out our next door neighbor, Fitz,  works at the local Ram dealer,  so we went there first. Driving it just wasn’t all that exciting. I told Jeff that if you’re going to spend a lot of money on a new car, you should feel like jumping up and down like you do when you get new running shoes. We just didn’t feel that way about the Ram.

Our neighbor has a cute dog named Toby. He even has his own RV which is pulled by Fitz’s Harley, complete with fake fireplace and air conditioning! 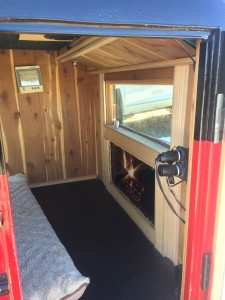 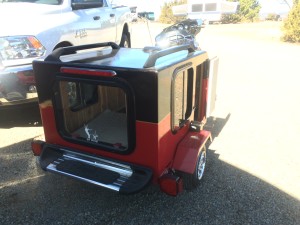 Seeing things like this is one of the most fun parts of staying in RV parks. People live outside the box in so many ways!

Sunday we went to Albuquerque car dealers. Again, no used trucks with our specifications – but lots of salesmen trying to sell us what they had instead!

We finally realized we were not going to make it to SLC in time, and Jay had to cancel his trip. Even if we had bought a new truck, it would have taken several days to buy and install the fifth wheel hitch. We started looking nationwide for the right vehicle, the thought being that I could fly wherever to pick it up and drive it back to Santa Fe. We considered a red one from an individual in Washington state and a blue one (my favorite) from a dealer in Texas. We hashed over all the logistics like how to get temporary plates if we bought from an individual, etc. We continued to troll Craig’s list here in NM, and suddenly an option appeared (in ABQ, no less). We arranged to meet “Derik” at an RV park on Tuesday night.

He was super nice (a movie stunt man) and the truck was immaculate. It had low miles, meticulous maintenance and the price was right. Also, it came with a fifth wheel hitch! The only bummer is that it was white – our last color choice. Oh well, you can’t have everything.

Over the next couple of days Jeff arranged for a loan and got all the pieces put together to buy the truck. Derik VERY kindly offered to let us keep his plates until we arranged for our own, and even drove the truck up to Santa Fe (where he lives) for us. He keeps an RV in Albuquerque because so much filming goes on there and apparently the accommodations they give him are pretty awful.

One of the things you have to do for Florida when you buy a used car out of state is to have a police officer sign a document verifying the VIN. We had noticed a police cruiser at one of the trailers here, and he was certified to do that for us. He was from Louisiana, and was thrilled when we gave him a few Abita beers we had from our time in New Orleans.

Luckily, Jeff’s parents live in Naples, FL, which is our actual place of residence. His dad graciously took all our documents and got our new plates. Thank goodness for Fed-Ex!

One week from when Growler was stolen, we got a call that they had found him – or what was left of him.

We’re still waiting to hear what insurance will do for us, but the first thing they are trying is to say that our belongings are not covered because they were not in the RV when they were stolen, and that the kayak and bike racks were not “part of the truck”. I expected better from Progressive, and the fight is not over yet.

We haven’t had much more fun here in Santa Fe. I don’t really feel safe going places alone, especially after reading some Yelp reviews. We did go on a nice hike not far from town on the “Dale Ball Trails”.

So here’s our new truck. After much deliberation, we’ve decided to name it “Mulligan”.

So Salt Lake City will have to wait until another time. We’re off to Colorado Springs.

2 thoughts on “Tragedy or Blessing?”