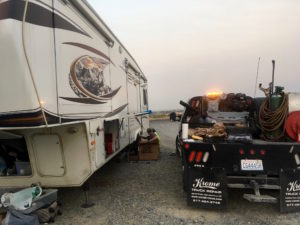 Hard to believe it is already 2018.  2017 and the trip to Alaska was such a special time, but we have other (mostly) great memories from the rest of 2017.   To catch up this will be mostly boring narrative, but my mother insists that we should write it all down, especially due to the drama that ensued!

Having entered the US at a small border crossing in Curlew, WA, a little GPS hell took us up and over and through an area devastated by wildfires a few years ago.  While there are signs of re-growth, it is amazing how long it takes for these forests to grow back.   We found a campground in Kettle Falls, WA where we were on the  shore of Lake Roosevelt, which is created by the Grand Coulee Dam on the Columbia River.

We pushed through the next day south through Washington and found a campground in Umatilla, OR, again on the shore of the Columbia River.   We were ahead of the smoke, ahead of our schedule and they had a site for a few days, so we decided to check out the area.

Just upstream of the campground was the McNary Dam.  They had a nice exhibit about their fish ladder and to the north side of the river was an abandoned railbed and tunnel.  We took our mountain bikes through the creepy tunnel.  It had a curve so you could not see the other end when you first went in.  Sue claims there was a bat – I’m just glad we didn’t run into any larger predators!

The trail along the river gave us a great view, although we were a bit surprised that the trail did not seem to be heavily used.  After we got to the dam, I noticed that I had a tire going flat.  And there was a nasty plant-based spike in 2 other tires.   It wasn’t long before we were both walking our bikes several miles back to the campground.   And it was then that we noticed the spiders along the path.  Every bush had dozens of them – and they were not small.  Sue did a great job not freaking out.  I just kept my mouth shut and kept on walking on the off chance she had not seen them!

This little excursion cost us 3 bicycle tubes – little did we know that this was just the beginning of our mechanical problems!

The next day we packed up and headed for Nampa, ID.  We were going to meet Sue’s brother David and family and we had lined up a great spot to watch the solar eclipse.  We had planned our whole trip to Alaska around getting back for this.

Not 2 miles down the highway, a motorist flagged us down because smoke was coming from one of our wheels.   There was not much of a shoulder, but I figured the brake had hung up and I could repair it there.   Sue (thankfully) insisted that we call the state police and at least get some protection.   The trooper told us that the next exit was a short way up the road and that he would follow us in the breakdown lane.  We limped to a dirt pull-off next to an onion field just off the exit.

I jacked up the rig intending to pull the tire off – but it fell off!  This was more serious than I thought.    The bearing had failed (and melted!) and the drum took out the brake assembly.  Why/how the tire didn’t come off while we are driving we will never know – but thanks to all of our angels for the help! 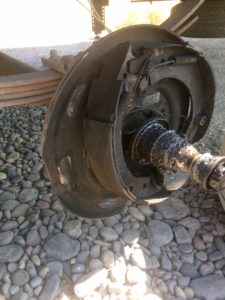 It was early Saturday afternoon before roadside assistance could get there.  We agreed on what parts were needed and we tried to hunt them down to no avail.   We also tried to figure out how to get the RV moved, but there really was no way to do that either.  Our eclipse plans were quickly evaporating.

Trooper Comey came by to check on us and I filled him in.   He knew the farmer whose land we were parked on and said he would give him a heads up about us.   He also lived just down the street and told us that if we needed anything we could just knock on his door! He continued to check on us daily while we were stuck there.   There are some really great people out there!

We watched the 97% eclipse from the edge of the onion field.  Other folks pulled off to also watch it and one family was nice enough to share their solar glasses (blessing). 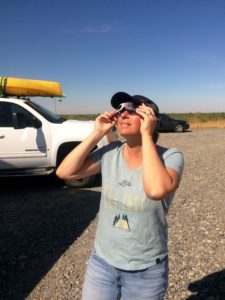 It was amazing how cool it got so quickly, but it didn’t get nearly as dark as it was for the rest of our group down in Idaho. The afternoon after the eclipse, route 82 was backed up for 4-5 hours as people tried to get home. We were glad not to have been stuck in that!

It was a hot, dusty few days while we waited for parts to arrive.  Although we were fairly safe off the road, it was noisy and large farm trucks constantly came by us.  We finally got on the road Wednesday still hoping to somehow catch up with David and Karen in the Sawtooth Mountains. Throughout our trials during this time there were many blessings. For instance, we had just bought food to feed everyone during our overnight in a farmer’s field for the eclipse, filled the propane tanks and water tank, so we were fully self-sufficient for dry camping.

We pulled into Nampa and got settled in.  Richard B, a good friend and ex-coworker of mine, and his wife Jan live there now, and we arranged to have dinner.   (Richard and Jan had caught up with us in Portland, OR 2 years earlier)  We got into the truck and moved about 2 feet when the truck died, just like it had in Montana Creek, AK.  Aha – must be the fuel filter again I thought.    A friendly neighbor saved me from having to bicycle to the auto parts store this time (blessing), and I changed the fuel filter, but dang-it, that wasn’t the problem.

The next day Mulligan was treated to a tow to a local shop.  The problem was diagnosed and parts were ordered.  Thankfully, Richard and Jan lent us one of their cars so we could get around (blessing).  Sadly, the parts did not show up on Friday, so we were stuck in Nampa for the weekend!  GRRRRR!!!! Needless to say, we never did catch up with David and Karen.

It wasn’t all sorted out until late Monday. Tuesday, we pulled out of our rv spot only to see a warning light that our trailer wiring was now broken.   We drove back to the repair place with Monty in tow and finally figured out that they apparently blew a fuse while working on the truck!  Finally, we were on our way again.

We had planned to spend 3-4 days in Park City.  We had left a bunch of stuff there and we wanted to look around the area some more.  We were due in Columbus at the start of September and the clock was running out.  So sadly we only had 2 days in Park City which was busy getting ready for the push east.   One of those days was at a trailer shop to make sure the alignment and bearings were good to go.  Another friend from New Jersey, Roberta, was in Park City visiting her sister, so it was great to catch up with her over a cup of coffee.

Thankfully, the drive to Columbus (1700 miles in 3 days) was uneventful.  But geesh, it sure would be better if our roads and bridges weren’t falling apart!   We got Sue to the airport in time and it was a bit of a culture shock to get back into the working groove. We FINALLY got to meet up with David and Karen for a fun day of kayaking by meeting halfway between Columbus and Ann Arbor where they live.

3 weeks later we packed up and headed for Saratoga Springs, NY.  It was a 2 day drive, with a stop in Erie, PA at a campground on Lake Erie.   Vicky and her boyfriend Brian are stationed in Saratoga for training.   We had a great hike up a mountain overlooking Lake George and many other bike rides, meals and hanging out.  My parents also came for a visit one weekend and Sue’s other brother Richard and his wife Lynn also came up.

We also had a visit with Al and Monique from Suffern crew days.  We said goodbye to our rowing shells, which had been hanging in Al and Monique’s barn, as we sold them to Suffern Crew.

The time flew by, except for the fact that it was a warm October, which brought out the stink bugs and lady bugs.   We must have been parked right over a nest because we had dozens of them in the RV.  We never did figure out how they were getting in.   Here it is over 2 months later, more than 1000 miles away, and we still have them.  We hope we didn’t cause any ecological problems distributing them all the way down the east coast! 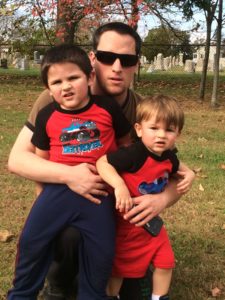 Jeff headed to Boston for the Head of the Charles and got to swing by Rhode Island to see Richard and the boys.  They are growing like crazy!

Our next stop was Delaware.  We found a state park (Lums Pond) that had recently updated their services and it was less than 15 minutes from Julia, Chris and CJ. We got in some great quality time with them, and had some of Chris’ family over for an early Thanksgiving Dinner.

After a month in Delaware, we blasted all the way down to Naples Florida over the Thanksgiving weekend. Luckily, the park we have stayed at several times before had just reopened after Hurricane Irma repairs. There were noticeably fewer trees and many of the permanent “park models” had been flooded up to the ground floor, but overall they had done a great job getting the place back together. We saw a lot of downed trees and blown over signs along the highways. Naples pier is closed about halfway out due to damage.

We had a lot of great visits with Mom and Dad over the month of December. They treated us to several dinners out and even took us to see “The Book of Mormon” (highly recommended). 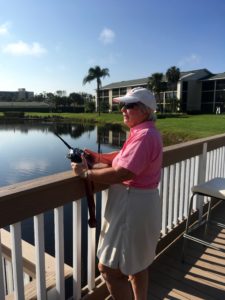 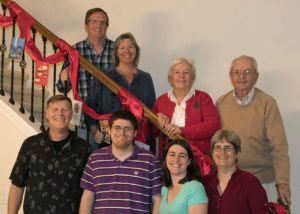 We moved to Tampa just before Christmas and celebrated the holidays with Anne and her family.   We got to kayak on the Hillsboro river with Anne, Mitch, and new friends that we had met in Delaware, Renee and Lew.  Lots of wildlife along the shores!

Sue got to play with her new toy – a rowing rig that straps onto an inflatable stand up paddle board!

We closed out  2017 with Anne and Mitch as we look forward to heading west.  We have 4 months planned in Park City with stops in New Orleans and Colorado Springs on the way there!