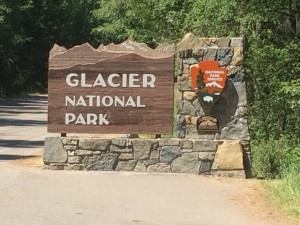 Gorgeous peaks and valleys, perfectly clear lakes with a green hue, and waterfalls everywhere make Glacier NP breathtaking.  At first we thought it was the glaciers we were there to see – but actually it’s what the glaciers left behind that creates the beauty of this park. It is so big its hard to see it all from one location and pictures do not do it justice.   We stayed near the west entrance, but ended up driving to the east (Many Glacier) entrance for a night to see that side too. There is also a segment of the park in Canada called the “International Peace Park”.

There is only one road through the southern portion of the park. It is called “Going to the Sun” road, and is too narrow and twisty for our truck to go on. There are free park shuttles that go the entire distance, and private tour buses as well.

We took a “Red bus” tour from Apgar Village (west entrance) up to Logan Pass, which is about halfway to Saint Mary on the east side. The buses have been operating in the park since the 1930s and have all been refurbished.The drivers (called ‘Jammers’ from having to jam them into gear in days of old) are very knowledgeable and funny, sharing all kinds of park information from geological facts to indian lore. There is a Blackfeet Indian reservation nearby – they are some of the only native americans who do not mind being called Indians. Going to the Sun Road winds along what is called “the garden wall”: a tall, thin rock face left by the glaciers. It’s so narrow in places that if two red buses meet one has to stop to let the other by. The views were stunning. The top of the bus was open, so in addition to stops where we got out, we cold also “prairie dog”, where he stopped the bus and we all stood up to take pictures, then sat again and moved on. 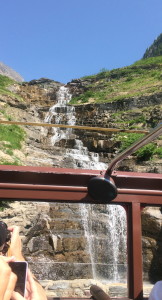 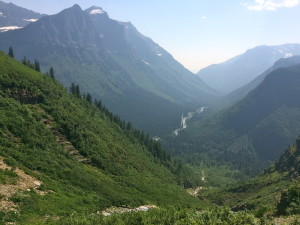 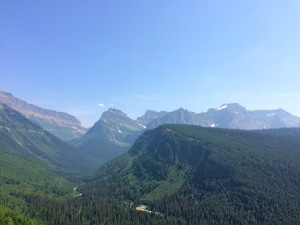 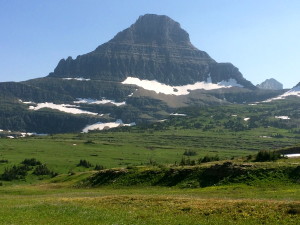 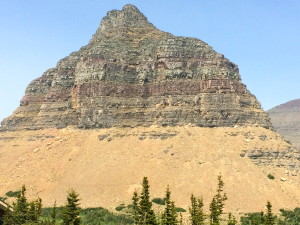 Logan Pass afforded a 360 degree view of all kinds of peaks and valleys as well as fields of wildflowers. Everything was slightly hazy due to two wildfires in the area.

The best way to see the park is by hiking its many trails. The first one we did one evening after work was through a hemlock forest, along a stream with many small falls, and up to Avalanche Lake. This crystal clear glacial lake is surrounded by tall peaks and fed by waterfalls created by snow melt. If you zoom in on the picture, you’ll see that the white lines are actually huge falls. 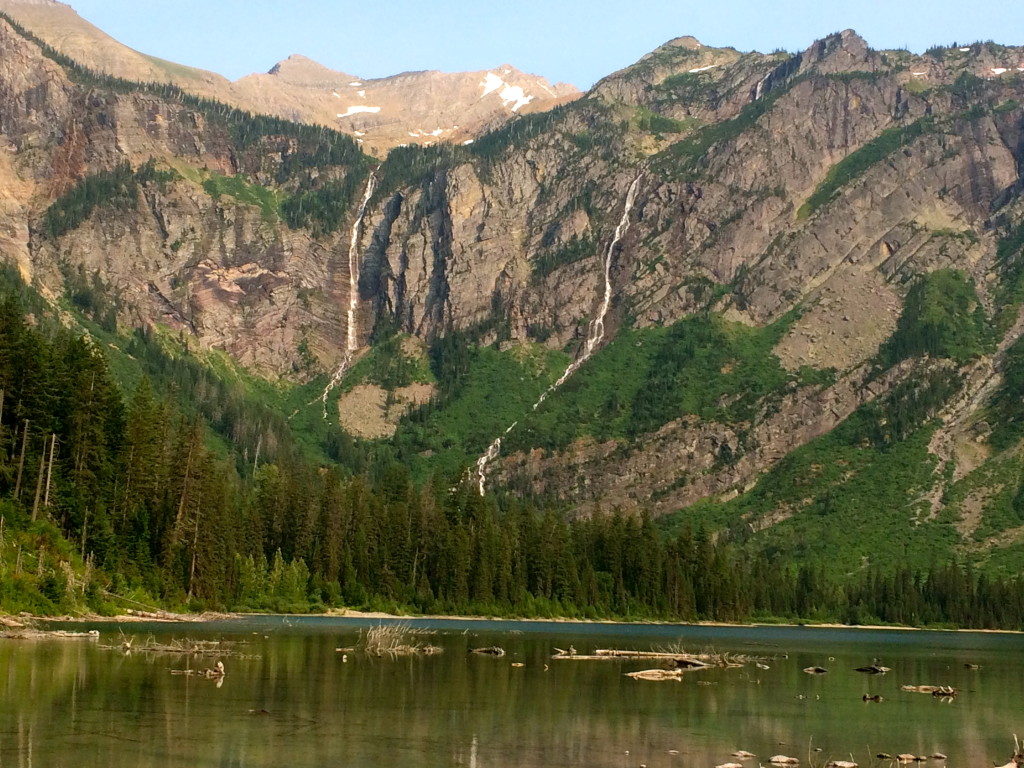 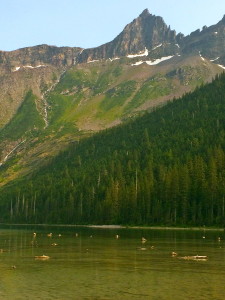 Near our campground was the Flathead River (we were in Flathead County, which I think is hilarious considering my current job www.cranialtech.com). We kayaked this fast-running river several times: once with a group of canadians we met at the launch site who graciously gave Jeff a ride back from the landing, and another time with some neighbors we met at the campground. We saw 2 bald eagles watching the river for their next meal on our paddle with Jan and John.   The river ran so fast you didn’t really even have to paddle, except in the rapids, which were exciting and frequent.

There’s a cool website called RVillage where RVers can post their location and interests. That way you can tell if anyone you met before is where you are. Through that site we met Mike and Kathie as well as their dogs Max and Opie. They are software folks who are taking time off to tour the country in their RV. We made a point to go meet them and got to spend a little time with the puppies the next day while M&K were out hiking.   They also gave us great advice about hiking on the east side which really paid off on Saturday.  Thanks!

Many Glacier is on the east side of the park and consists of the Many Glacier Hotel: a swiss chalet-style building opened in 1915. Though rustic, it has an old world charm including a deck which faces the lake and….you guessed it… many glaciers.   Perfect spot for a beer after hiking!

On a Friday night we drove around the south end of the park to Duck Lake Lodge – a small fishing lodge not far from Many Glacier. I had asked for a room for two, and it was a surprise to find two twin beds and no A/C when we opened the door. However, it was a cool night and served the purpose.

Early the next morning, we met up with our campground friends Mike and Kathie who had moved their RV to the local KOA and planned to do the same hike we were up to Grinnell Glacier. (Actually, it was their description of their plans that got us interested in that area of the park).  Being much better planners than we were, they had made their 3-days-in-advance reservations on the boat that takes you to the trailhead. We got on the waiting list and bit our fingernails until we made it on. After a short ride to the end of Swiftcurrent Lake on a cool old inboard wooden boat, we climbed onto shore and up and over a ridge to Lake Josephine, where an identical boat took us to the trailhead. The weather was a little unsettled, but the hike was amazing. Quickly ascending a switchback trail, we could see down to where the boat dropped us on Lake Josephine. Shortly thereafter we cold see Grinnell Lake and the Grinnell Waterfall that feeds it. The trail then curved through alpine meadows full of wildflowers and smaller waterfalls, and right across the face of a large ridge. Looking back, we could see all 3 lakes and stunning mountains. 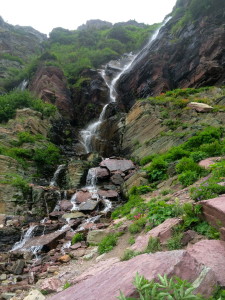 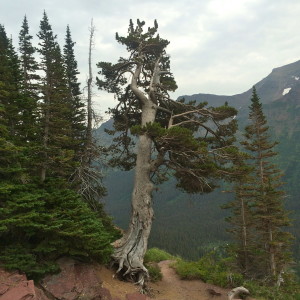 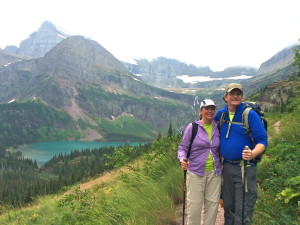 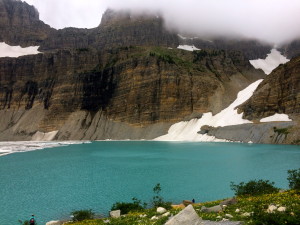 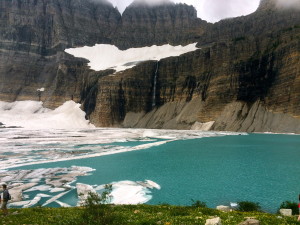 I was fascinated by the different types and colors of all the rocks up there, so I’m just going to post a bunch of rock pictures.  Click on them to see the wide variety of colors and designs. 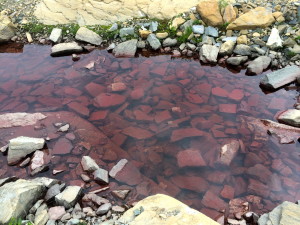 Our Red Bus driver had explained why the lakes are so green. The rock here is sedimentary which makes it soft. One prevalent rock is called Argillite, and there’s a green and red variety. When this rock gets ground up by the glaciers, it becomes a fine silt that is suspended in the glacial lakes. When the light bounces off this suspended rock it creates that gorgeous turquoise color. Near the Grinnell Glacier, we saw red pools for the first time.

All my life I have never seen a moose in the wild. I lived in New Hampshire for 12 years; we spent a month in Maine last summer; we have been in Wyoming and Montana for over 2 months – zip, nada, nothing. And then on the way to Many Glacier….