Almost 4 full years of adventure have flown by!  But with more work and a wedding (or two) and insurance bills to pay, juggling travel was getting harder and harder.   Our planned 4 months in Park City has turned into a return to a more stationary lifestyle.  There were  some adventures getting here though!

Much of January was spent in Tampa with Anne and Mitch.  Bike rides, kayaks, visiting the dogs at the shelter, etc.  We also caught up with our new friends Renee and Lew.  Before we left Florida, we had 1 final surprise for Jeff’s parents – an early party to celebrate their 65th wedding anniversary.  They were expecting Peter and Irene for the weekend, but got all the rest of our generation.  We had a fun time by staggering our arrival for Friday night dinner.   As they welcomed us, Mom states “If anyone else comes through the door, I won’t know what to do!” and seconds later, Nancy walks in.  It was a short weekend, but great for all of us to be together.

It was time to head west!  First stop – New Orleans!  We stayed closer to the city this time and were able to take an Uber back and forth.  Again, we were there in the early part of Mardis Gras which is fun – some parades, some crowds but not super crazy.   Good food, great music on Frenchman Street, including a impromptu jazz group on a street corner.   Eating hot, fresh beignets on a park bench overlooking the Mississippi, walking around and great people watching, New Orleans never disappoints!

Our next planned stop was Dallas so Sue could fly out for work.  Louisiana roads (and perhaps a bit of Alaska still haunting us) took their toll and within sight of the Texas boarder, we hit a big bump.   The FedEx truck behind us started flashing his lights as I realized that Monty was trying to travel in a different lane than us.  As so many times before, a blessing came along with a near disaster as there was a weigh station literally right in front of us.  We pulled in and were safely off the highway. 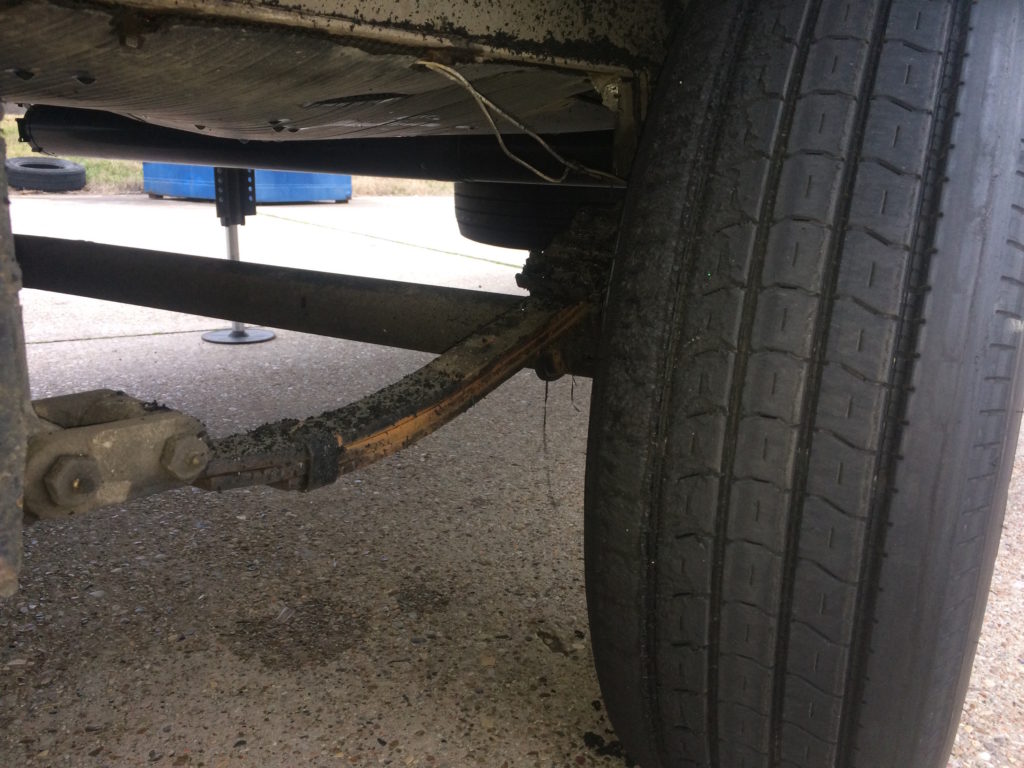 After a few deep breaths, we got out to assess the damage.  The left rear springs had come apart (we lost 3 or 4 of the leaf springs) which let the axle shift back.  This damaged the trailer fairing and caused both rear wheels to rub against the frame, mostly destroying the tires.   Visions of spending a week in this deserted weigh station flashed through our minds (it was 4pm on a Saturday – who knew when it would get fixed).

Roadside Assistance finally found a mechanic who finally showed up.   I don’t like to stereo-type, but these were 2 “good ‘old boys” from a little trailer shop outside of Shreveport.  (VERY mixed reviews about them on Google!   As “Larry and Darryl” were crawling under the RV, a pistol fell out of one of their hoodies!  To their credit, they were able to use chains and straps and got the axle back to a reasonably aligned position.   We were able to slowly drive a mile to the next exit, then a few miles to a nearby campground so that we would at least have some services while we waited for the repairs.

Sue was scheduled to fly out of Dallas the next day, so she had to rent a car and Sunday drove to DFW.   Monday we started ordering parts and new tires.  On Wednesday, the repair shop sent out their other brother Darryl to make the repairs.  He was an unhappy fellow that usually worked on bigger trailers and couldn’t find the right tools.  He was constantly talking to himself and was not thrilled with me watching over him.  More than a few times he muttered to himself how much easier it would be if I wasn’t there.  Friendly customer service was apparently *not* “job #1” at this shop.  He managed to get all the pieces put together and the new tires showed up on Thursday afternoon so I was ready to hit the road Friday, just in time to get to Dallas and pick up Sue.

Saturday morning was cold and wet, but we needed to get back on the road towards Colorado.  The temperature plummeted during the day, which led to another RV lesson – don’t close your slides wet, then let them freeze.   When we got to our park in Dalhart, TX we were setting up, but the big slide-out was making funny noises.  We finally got it to extend.  But the next morning as we were packing up, we noticed that the awning over the slide was broken.  The awning had frozen shut and when we pushed the slide out, the hydraulics broke the awning bracket.  Ug..

The drive from Texas, through the NE corner of New Mexico brings you up over Raton/Trinidad pass on I-25.  We have taken this route 3 out of 4 years and it has always given us a feeling of elation.   You get to the top and look out over the front range of the Colorado rockies, with snow covered peaks as far as they eye can see.

We made it to one of our favorite campgrounds – Garden of the Gods RV Park on the west side of Colorado Springs.  Sadly, the roads in the area were completely torn up and there was all kinds of construction going on.  But for a couple of weeks, we wake up each morning and look out at the sun shining on the top of Pikes Peak.  We were here a little too early this year to climb the incline, as it was still cold and partially snow covered.

Our exploration took us to the mining town of Cripple Creek.  Originally a gold mine town, now they mine the bank accounts of gamblers and tourists.  The annual winter festival was going on which closes the main street so elaborate ice sculptures can be built.  The artistry in ice was amazing – castles and knights and viking ships.   After walking through the vendors, Sue finally relented and let me into one of the casinos, where I proceeded to lose my limit at the craps table before Sue got served a measly martini.  Definitely the most expensive drink of our travels.

We saw promotions for another nearby mining town called Victor.  We drove over and quickly found there was nothing to do.  It was not quite a ghost town, but it won’t take much to make it one.   We did stop at a mine overlook.  This is an open pit mine and was amazing how big and deep it was.  You could see the massive trucks in the distance rumbling their way up and down the roads.  To help put the mine in perspective, the overlook was built out of a mining dump truck.

Because Jay and Virginia had fled Denver, we had canceled our reservations in Denver and decided to push towards Park City early.   It was not a bad snow year, but I-70 was having some snow squalls, so we decided to take the more scenic route across the middle of Colorado.  The weather was beautiful driving across the high plains.   We turned onto US50 to head towards Gunnison and I noticed that a road sign cautioned about chains.  What?  huh?  The skies were clear and the roads were dry.   We convinced ourselves that the sign had not been reset since the last storm.   As the road continued to rise towards Monarch pass, there were more signs and clouds were building.   Very quickly snow was flying and we pulled into a chain up area to figure out our game plan.

Sue had a flight to catch out of Grand Junction the next day, so there was some pressure to push on.  A snow plow driver pulled in and gave us a road report.  High winds and blowing snow over the pass.  Ug.   We regrouped at a little Mexican restaurant back down off the mountain.  I-70 and the passes to the north were also not passable with the RV and the forecast was for the conditions to continue for the next few days!

We found an RV park that was open.  It was snowy and literally in a ravine with no cell coverage.   We parked Monty and decided to check out the pass just with the truck.  Sure enough, it was crazy in the pass, and 5 miles of steep road with wind blown snow greeted us on the downside.   NOT something we wanted to be driving Monty in.  Once off the pass though, it was again a beautiful day with dry roads.   Sue had brought her suitcase, so we drove on to Gunnison so we could split up again – she would drive on to Grand Junction and I returned over the pass to be with Monty.

The next morning I needed to figure out what to do.  I decided to scout out the pass again, but was turned back fairly quickly because a tractor-trailer had jack-knifed and ended up across the road and in a ditch.   The passes due north also had similar cautions.   And with no cell service, I couldn’t really sit tight and wait it out while I worked.

I decided to zig -zag north east all the way back to Denver to pick up I-70 then go west to Grand Junction.   400 miles by myself.  Luckily the roads were in good shape, but the wind was howling for much of the trip.  Sadly Sue missed the beauty of following the headwaters of the Colorado River as I-70 winds west.

Sue returned from work and we thankfully had an uneventful (but windy) drive from Grand Junction to Heber City.

Heber City again impressed us with its spectacular views – surrounded by snow covered mountains.   We started house hunting in earnest, looking both in Heber Valley and in Park City.  We came across a townhouse condo that was perfect – 2 car garage, plenty of storage, southern exposure (with solar panels already installed!) looking out over a field and natural area, which even had a moose grazing one morning!

With a 10×15′ storage room in NJ, and other odds and ends scattered around New England, we had to make one more trip east.  We renter a Penske truck in NH, loaded it with stuff in Wolfeboro, got to visit with Abel and Sue’s brother Richard in RI (to pick up more stuff), and then met Julia and Chris in NJ.   At first, we thought the truck was way too big.  Turns out it was barely big enough!  Chock full, we headed west on Rt 80 for 4 days of driving, right to our front door.

Living in Park City means you need a versatile 4 wheel drive vehicle that can carry lots of toys.  The Subaru Outback is pretty much standard equipment.  In fact, some realtors include one as part of a higher end real estate deals!

Our final story is once again of how small a world this really is.   The people that sold the condo were headed back to live on the ocean in their new boat.  Like we did 4 years ago, they gave us lots of furniture, electronics and other stuff that they wouldn’t need.  They are using the same mail forwarding service in Florida.  To top it off, they grew up in Poughkeepsie!  He was in the same school district (although a number of years earlier) and lived maybe 2 miles from where Jeff did.  Absolutely amazing.

We have decided to sell Monty and Mulligan and hope to find someone else that can have even half of the amazing adventures with them.  It was an incredible 4 years and we highly recommend the adventure.   Thank you all for following along!