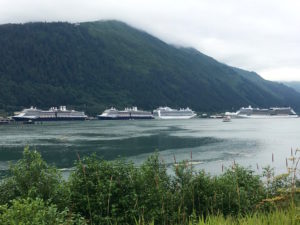 It seemed like the more we saw in Alaska the more amazing it was. Perhaps that is because we did the Kenai Peninsula at the end of our trip. From Haines, we loaded Monty and Mulligan onto a state ferry. Juneau is only accessible by water or air despite being the state capital! The downtown area in the summer is simply cruise ship tourist mania! We avoided that like the plague, but there were plenty of other cool things to see. 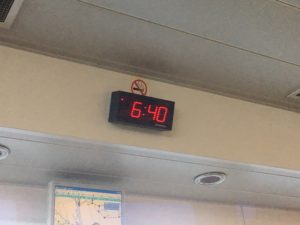 It was about a 3 hour trip to Juneau, and the ferries are notoriously late. We were supposed to leave at 4:30… 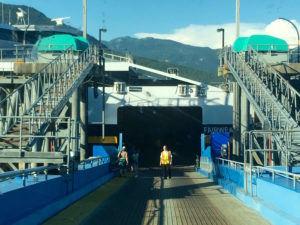 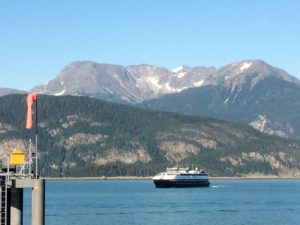 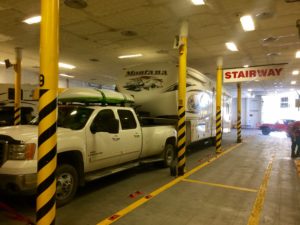 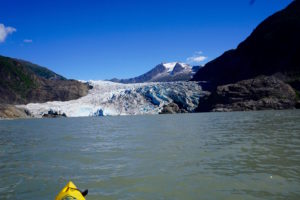 People always ask us what our favorite thing about our Alaska experience was. It’s impossible to narrow down to one thing, but the top 3 are:  landing on the Ruth glacier  in a small plane with views of Denali, our whale-watch excursion out of Seward, and the ice cave in Juneau. The 13-mile long Mendenhall Glacier terminates at Mendenhall Lake. The only way to get to the glacier is either hiking a 6 mile trail or a paddle across the lake, which we chose to do with our kayaks. It was the first (and probably last) time we’ve ever kayaked with icebergs! It was a calm day but we were amazed at how much the glacier impacted the conditions, creating its own wind.

On the way to the glacier is Nugget Falls – almost too much beauty in one place to take in! 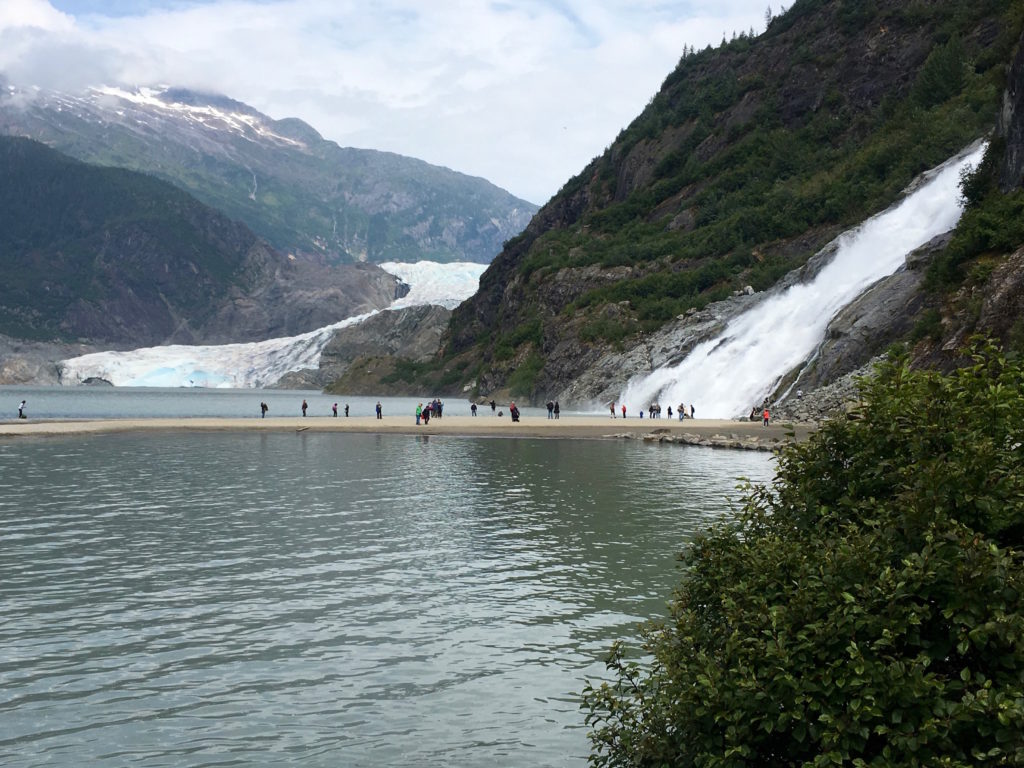 Once we got there, it was a short hike up to the edge of the glacier. The caves form and then collapse periodically as the glacier melts and advances. There were several tour groups around, so we knew it was safe and only went where they had gone.

You could walk in under the edge of the glacier with the gorgeous blue-green ice overhead, water streaming through and often rocks and little chunks of ice falling. We didn’t have helmets but our PFD’s worked just fine. It was the coolest thing I’ve ever seen. 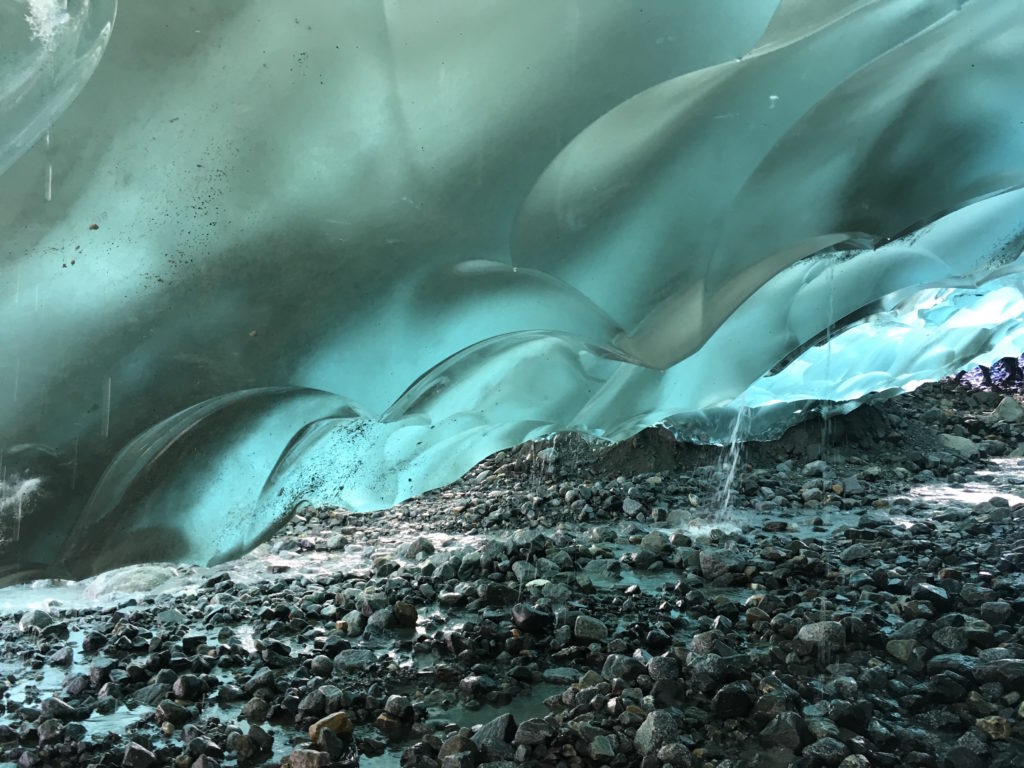 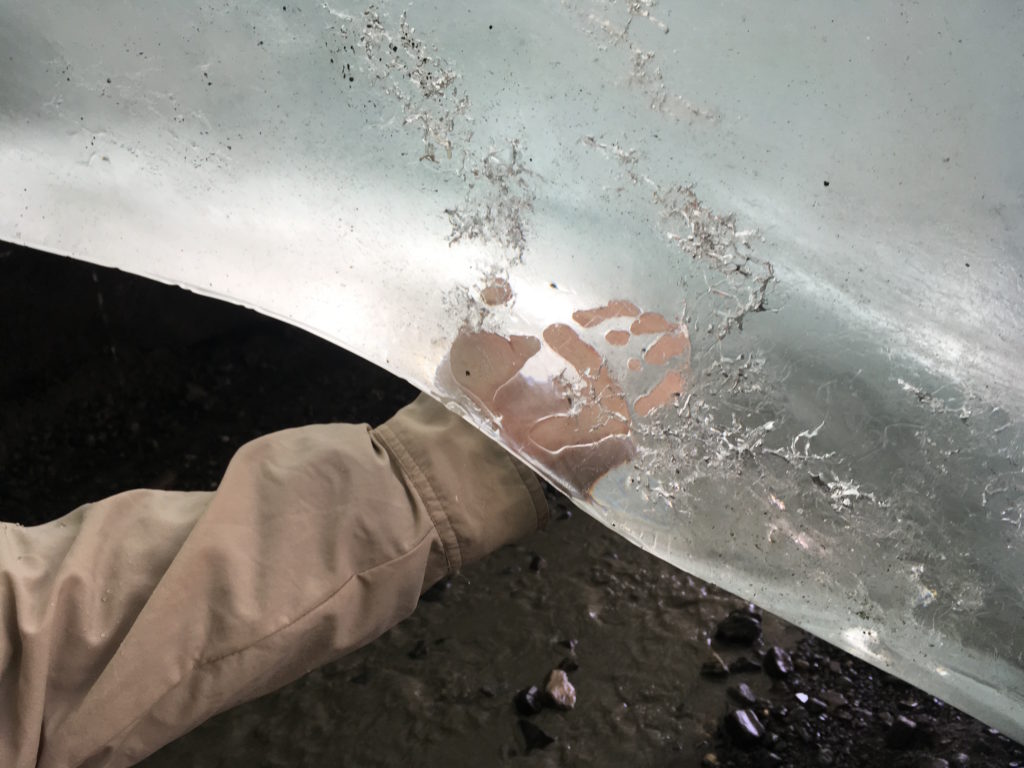 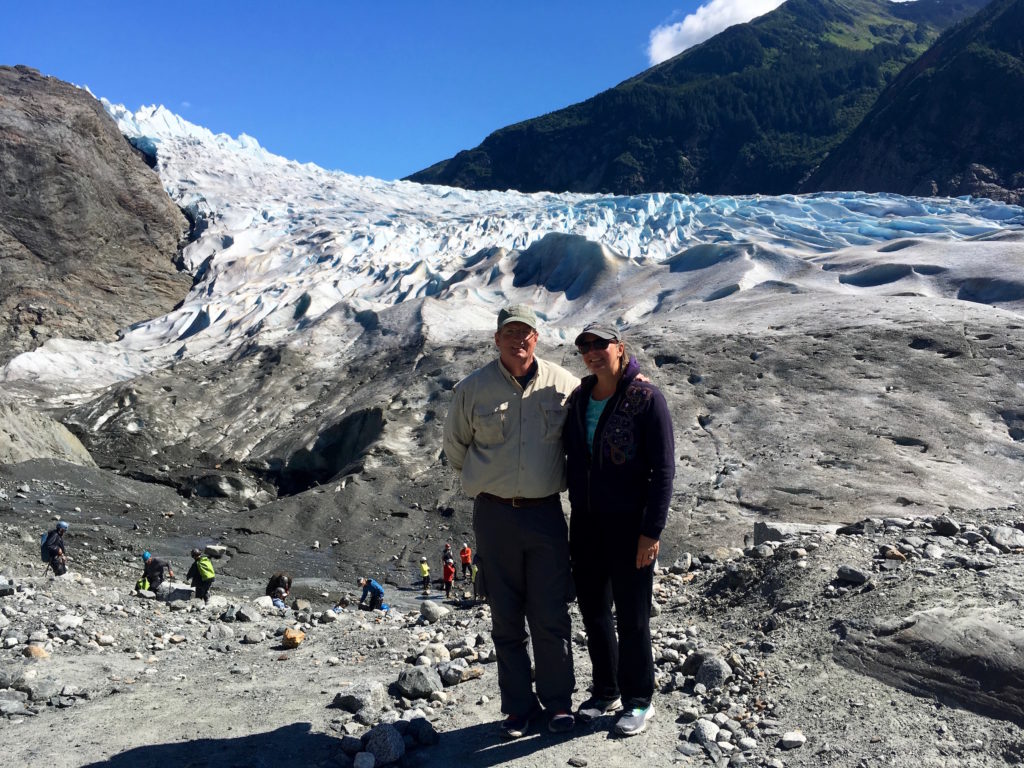 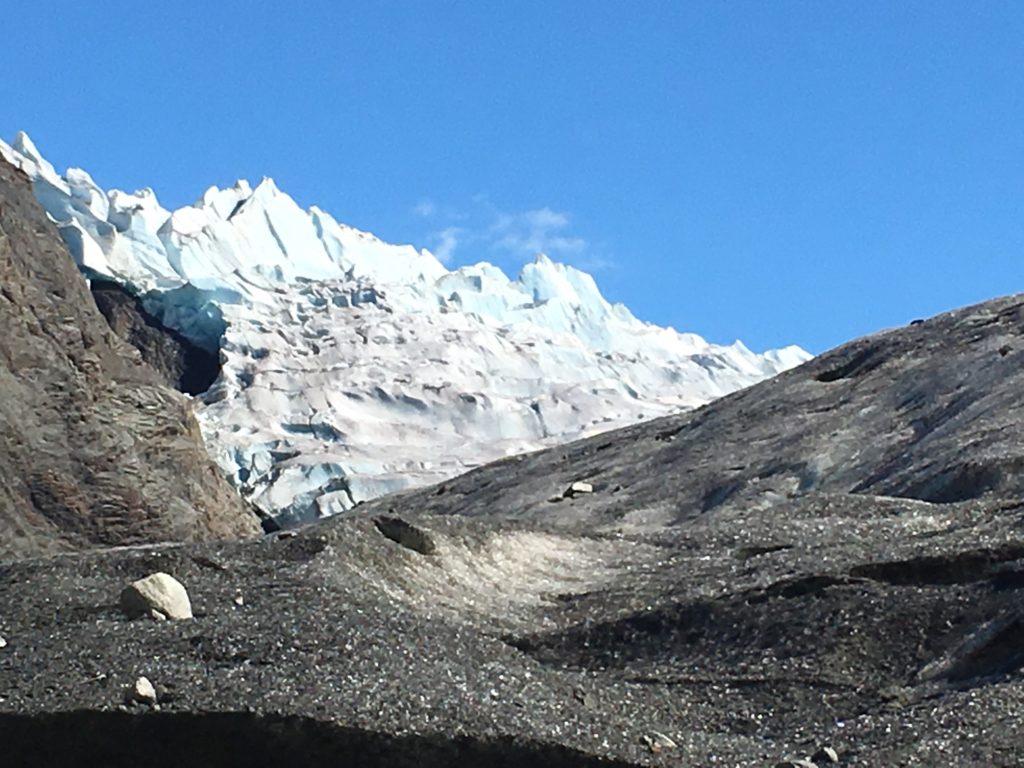 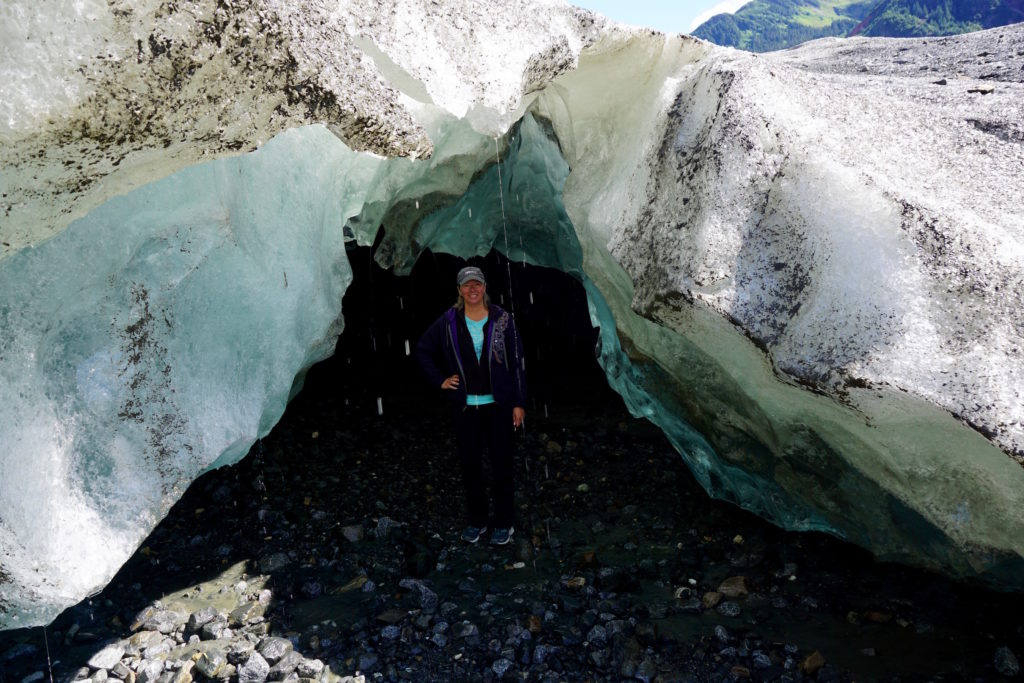 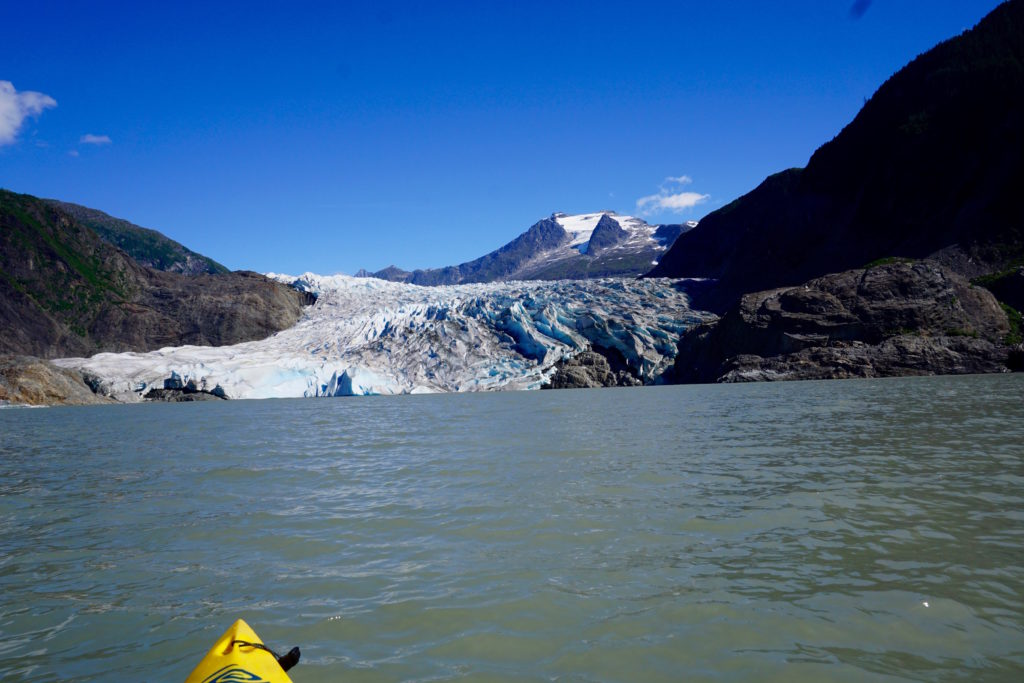 If we ever get to go back to Alaska, I’m going there again!

South of town there was a park with the remains of the Treadwell Complex, where four gold mines were operated in the late 1800s. The town had five mills, stores, mess halls, bunkhouses, a marching band, and even Alaska’s first indoor swimming pool, known as a natatorium. The Treadwell Complex mined roughly $70 million in gold out of the rocks of Douglas Island. In the early 1900s, due to some questionable safety practices and a particularly high tide, 3 of the 4 mines suddenly collapsed. Tons of equipment and animals were lost. The entire natatorium fell into the mine underneath. Apparently, women were swimming in the pool when all the water suddenly drained out. Everyone got out safely before the collapse.

It was spooky to walk around this former town and see abandoned equipment and buildings everywhere. 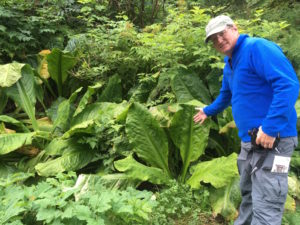 Alaska has a very short growing season, and some of the plants seem to know that and get a bit over-exuberant!

Juneau was the only place in Alaska where we saw what we would consider typical housing developments. Everywhere else had random styles of houses on varying sized lots, and most of them looked like they had been through a war! We also noticed that piles of junk cars were everywhere. It must be too expensive to get rid of them. 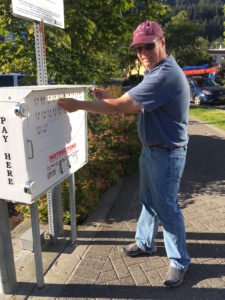 We decided to take a boat tour of Tracy Fjord for more whale and glacier views. Juneau had the strangest parking situation where you had to roll up and slide dollars into a tiny hole in a box. There was even a little “tool” on a chain to help you push the money in. 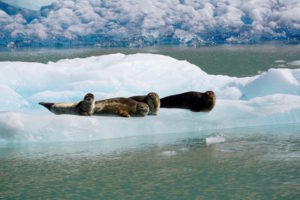 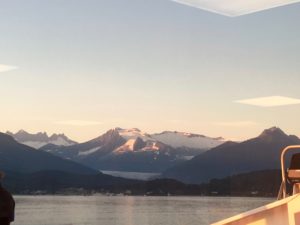 We hung out with the captain for a while, and learned he lives at the same RV park we were staying at. He asked about our trip and could not believe that our windshield had not gotten broken by a rock (something that happens to most people in Alaska because of all the road construction). He joked that he’d have to come over later with a hammer and take care of that so we fit in better 🙂

After 3 days in Juneau, it was time to board yet another ferry and head south. This time we loaded at 2:45 a.m.! Luckily, we were able to drive on forward: we’d seen folks having to back on in certain cases. This one was a bit larger and took us all the way to Prince Rupert, B.C. It took 3 days and 2 nights, with several stops along the way. 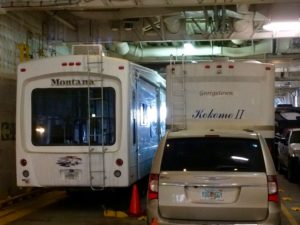 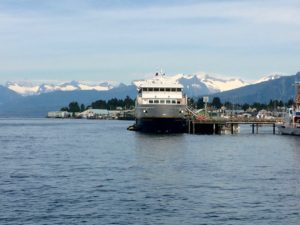 Waiting in line for customs after getting off the ferry, we were right behind another Montana just like ours, and got a pic of our reflection… 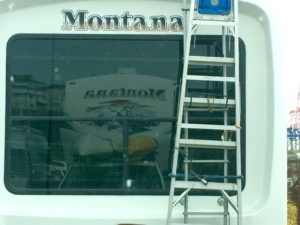 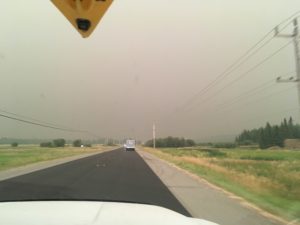 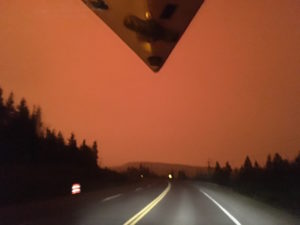 Once back in B.C., we had to adjust our route around several wildfires. For 3 days we drove through ash and smoke, and saw signs for refugee housing in the towns we went through.

We made a mad dash from Prince Rupert, east through Prince George, almost to Jasper National Park, then south to Kamloops.   Each day we seemed to be just staying ahead of the worst of the smoke, but most of the time you could smell it.  Mike and Kathie – take note – one of the best milkshakes ever was at the Rock Creek Trading Post  in Rock Creek, BC!

We ended up at the US border crossing at Midway, BC/ Curlew, WA.  The customs officer had to move a barrier out of the way because we didn’t fit through the normal portico.   It seemed like it was just her house, had it not been for the truck scanner!  The officer was pleasant and asked the usual questions and welcomed us back to the US.

One thought on “The Best for Last? Juneau”