We had a great time seeing family back east: Jeff for one week and Sue for two.

After a week of work, we finally headed to visit family.  Jeff flew in to Newark and picked up the rental car and drove to Nancy’s near Worcester.  Sue took the red-eye from LA, then a shuttle van from Boston.  It was quite the traveling weekend for our entire family – Nancy returning from LA, Peter and Irene from Alaska, Anne and Lianne driving to New Hampshire and Becka returning from Africa.  Thankfully, everyone made it safely and with all the luggage (more on this later). 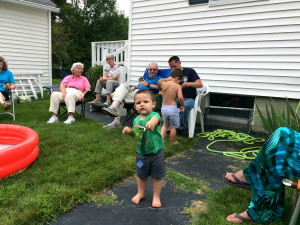 Saturday was mostly a recovery day and a prep day for Sunday.   We celebrated Mom’s birthday a month early, but hey, it was a chance for all 4 siblings to get together!  As you can see from the pictures, we had quite a crowd – about 1/2 the Friedrichs clan spanning 4 generations!

Monday we drove to Wolfeboro to spend a few quieter days with Jeff’s parents.  Beautiful days on the lake boating, kayaking and relaxing!   Our quiet vacation was interrupted with an alert from “Lifelock” – someone was trying to open an account using Sue’s identity.    After puzzling about it, we got a credit card alert and realized that someone had stolen things from Monty.

A call to Camping World confirmed that it appeared someone had been in Monty while it was in the parking lot!  The next couple of days was spent calling credit card companies – $600 at Lowes, $1200 at Target, some gas here and there, more at T-Mobile…

Thursday we headed back to Rhode Island to Sue’s brother’s house.  Friday we drove to Westerly RI and had lunch overlooking the ocean with Lynn and Richard.

Saturday we drove to New Jersey to see Jason and Virginia.  Sunday morning Jeff got to go for a row back at Highlands with his friend/rowing partner Mike, and caught up with a few other members.  Sue donned her motorcycle gear and headed out for breakfast.  Sue loved getting to ride.

While there, we went to the Sussex County Fair. I saw my first ever demolition derby. 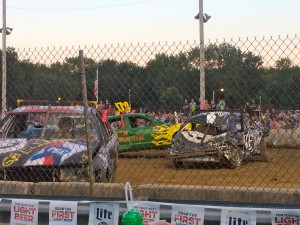 Jay generously took a couple of days off so we could do things together. We went for a hike to a pretty waterfall in Pennsylvania, then up to a gorgeous overlook. 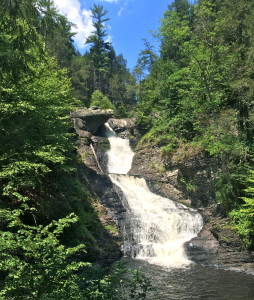 Another day we took a bus to the top of a rail trail and rode our bikes back down. At the bottom was an old mining cave, and of course, Jay had to ride it! 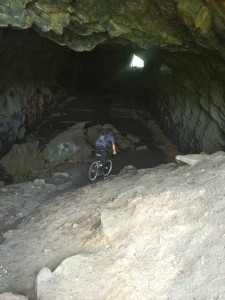 Monday Jeff headed for the airport early and made his way back to Seattle.   After the problems in Albuquerque, his fingers were crossed that the truck would still be there.  Not only was it still there, but it had *gained* a piece of luggage!  Yup – somehow someone had added a suitcase to the bed of the truck!   Hopefully it didn’t fall out of one of the planes flying by!

While it was evident that someone had gotten into the trailer while stored at Camping World, Jeff was saddened to find that the person had thoroughly ransacked the place.  Every cabinet was checked, and every drawer was searched.   Not only did they get Sue’s wallet, birth certificate, social security card and passport, but they got a bunch of other financial stuff, old Iphones, a printer and Jeff’s camping gear.  They even took a bottle of cologne!

And to make matters worse, Camping World didn’t even attempt to do the repairs!   We are now dealing with the National Service manager who is trying to make things right, but it will be hard to replace all the things that were lost.  (And because there was no “forced entry”…e.g. they left our home unlocked, Progressive once again escapes without having to pay the claim)

More than a little depressed, Jeff finally got wrapped up and headed to Gig Harbor, impatiently waiting for Sue to return.

Meanwhile, Sue spent another couple of days with Jason, then went to Delaware to visit Julia. She had a great time staying with Julia for a few days. Julia also took some time off from work and they lunched and shopped – so much fun. Sue got to see the gym where Julia works out everyday – she regularly wins weight lifting competitions and also does crossfit just to mix it up. Julia, her roommate (also Julia!) and Sue tried to go kayaking at a state park but it was such a nice day all the kayaks were already taken, so they ended up with a paddleboat! It was fun, but the poor Julia’s had already lifted for 3 hours that morning and didn’t need any more leg work!

Sunday arrived and Sue headed to Texas for work, where it was only 108 outside.

After a fairly normal week at work, Sue tried to get back to Seattle.  However, her flight was delayed for almost 2 hours.  This was lucky for Jeff though – as he headed to the casino to take up the time.   Jeff made over $400 in less than an hour, and pulled himself away from the table.   After seeing that he had more time to waste, he got back into the game.  He had one of his best turns on the dice,  rolling for almost an hour and making another $900 for us, plus at least that much for 4-5 other players.   Needless to say, there was a lot of excitement and fist-bumping!   At least it took a little sting out of the losses from Monty.

We finally got back to Monty at about 1:30am in Gig Harbor..  The next day we took a ferry to downtown Seattle, and Sue realized that in the past 48 hours she’d been on a plane, bus, car, train and boat! Phew – what a month!

One thought on “Visiting Family Back East”